From High Fashion to Frying Franchise

How a former high-style hairdresser became Wingstop's No. 1 franchisee.

By Jason Daley
September 20, 2010
This story appears in the October 2010 issue of Entrepreneur. Subscribe » 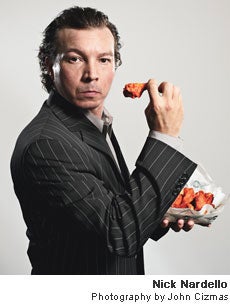 Nick Nardello has a list of funny titles to describe his unusual journey from the world of high style to master of the Frialator. "If I ever wrote a book, I'd call it From Gucci to Grease. Or From Fashion to Fryin'," laughs the Chicago-area native, who left a lucrative career as an upscale hairdresser to open a Wingstop buffalo wing franchise in Elmwood Park, Ill. "To this day, I look back and go, "Wow, what a complete 180 I did.'"

But Nardello should title his story From Working Hard to Making Millions. His true achievement isn't that he made a dramatic career change. It's how well he's excelled at franchising, hitting the million-dollar mark soon after he and his father, Lou, launched their Wingstop. Overcoming obstacles and putting in years of work, Nardello has become the highest-grossing franchisee in the 600-plus-store Wingstop system, saucing up more than $2 million in chicken wings each year, a distinction he's held since 2008.

It seems like an odd success story at first--Nardello's store is in an area saturated by fast-food and fast-casual restaurants. His store, at 1,400 square feet, is one of the tiniest in the system, with a line of wing aficionados usually snaking out the front door at lunchtime. But Nardello knows many of those customers by name. He has an easy repartee with his employees, most of whom have been with him since the beginning and most of whom he barbecues with on weekends. T-ball teams, sororities, fund-drive organizers and Boy Scout troops are always popping in, because they know Nardello is willing to give to the community.

"Interacting with the customers is something that I always have done and will do until I'm 6 feet under," he says. "It's been an extremely key part in the success of this particular store."

Bill Knight, chief operating officer of Wingstop who has worked with Nardello since 2003, says, "Nick has a family connection with his guests and employees. He started at some really low sales volumes and was teetering on the edge of insolvency in the early days, and now he's the No. 1 restaurant in the system. I give all the credit to Nick--he's done a phenomenal job."

A dedication to customer satisfaction was baked into Nardello from the beginning. For most of his life he watched his father work seven days a week manning his small chain of high-end beauty salons in the western suburbs of Chicago. After high school, Nardello joined the fraternity of snippers, going to hairdressing school and studying for a year at the Vidal Sassoon Academy in London.

After that, Nardello's life was all about wearing designer suits and sharpening shears while styling at his father's hair salons and traveling the country as U.S. ambassador for the Toni & Guy brand. For 13 years, he manned the stylist's chair and never regretted the path he had chosen.

"When my father decided to retire, he offered [the family business] to me," Nardello says. "I actually didn't want any part of it. Because I knew if I were to take it over, he would never retire."

So the family sold the salons, and Nardello spent two years figuring out the next phase of his life. He thought he'd like to get into the bar business or open a food outlet with his father, who would take care of the financials and the back end while Nardello took care of operations. One night, while visiting a girlfriend at Hooters, Nardello marveled at the restaurant's quick turnover.

On a trip to Dallas, he accidentally stumbled upon the original Wingstop store, and his future clicked into place. He was blown away by the concept. When he and his father investigated it further, they found a franchise was within their price range. By May 2002, the Nardellos were in the wing business.

But it was a false start in many ways. At that time, at least in Chicago, buffalo wings were listed on bar menus or appetizer lists, not the entrée page, much less being the main focus of an entire restaurant chain. As Nardello puts it, "We were a hot wing restaurant in a market that had no clue about hot wings."

That first year, the Nardellos slowly introduced the wing concept to Chicagoland. People who thought Wingstop was a model airplane store or travel agency would call, asking for models of B-12 bombers or tickets to Ireland. But Nardello watched the average ticket rise, from a tentative $7 sampling to $9 or $12 as customers became hooked on the tangy sauce.

Then the rug was pulled out from under the operation: Thirteen months after launch, Lou suffered a stroke caused by a massive aneurysm, losing the ability to walk and talk.

"It was very difficult," says Nardello, who spent the following year settling Lou into his new life and rededicating himself to making the business a success on his own. Many nights, he slept on a cot in the storeroom. His father had always told him: If you're not winning, you're losing. Nardello transferred that mind-set to his store and aimed to have the busiest restaurant in the Wingstop system. There was one thing, he knew, that could differentiate his store from the rest: the high-class customer service he'd learned in the salon.

In the salon business, "you spend an hour or an hour and a half with someone and they want your complete attention. You didn't check e-mail or make a phone call. That's what we try to give customers here," he says. "It doesn't matter if they spend 59 cents on a cup of ranch or $300 on catering. They're going to get better than white tablecloth service."

That means chatting with the customers, getting to know them. The staff is trained to be friendly and attentive, interacting with customers. If the line leads out the door, which it almost always does, visitors are given wait times. Every staff member smiles. Everyone makes sure the door handle to the restroom is never dirty or greasy. "I always tell my staff, "When customers leave this place, they'll definitely remember the experience and tell other people about it.'"

By 2005, about a year after Lou's stroke, the Elmwood Park Wingstop exceeded the million-dollar mark, and Nardello felt the tide turning. Not only was Chicago waking up to the hot wings craze, locals were buzzing about the fast, ultrafriendly service at the former hairdresser's restaurant.

Chris Virruso, a neighbor of Nardello for decades, says Wingstop has supported his children's and grandchildren's baseball teams since it opened. "The Nardellos are a beautiful set of people. The values Nick learned from his parents have carried right through to his entrepreneurship and his employees," Virruso says. "Because Nick was the owner, people were more intrigued to find out what Wingstop was all about."

From the beginning, Nardello cultivated his store as a true community asset, despite it being part of a national chain. T-ball, basketball, softball, flag football, bowling--any local team could count on sponsorship or a donation. Fraternities and sororities, walkathons, Girl Scout and Boy Scout troops, churches and school fundraisers all turned to Nardello for support. And he didn't scrimp.

"My business really branched out from that," he says. "From having one happy customer or community member to that person telling 10 others, it just spider-webbed like that. It started with families coming in on a weekly basis, to people ordering wings for birthday parties, to us catering 1,000 wings for 50th wedding anniversary parties."

Of 22 people on the payroll, about 10 have been with Nardello since the year the restaurant opened. Many others have been there for nearly as long, an astounding retention rate in the food-service industry. Though he doesn't provide benefits, Nardello says he pays his employees much more than the food service standard.

"As the business grows, it's shared with my staff through their income," Nardello says. "They get paid vacations. You wanna take a day off? Go for it. God bless you. You know, they need it, because it's not an easy business."

What Nardello expects--or earns-- in return is loyalty. His staff functions more as a team than an assembly line. Every employee, except the very newest, can do every job--from frying chicken wings to washing dishes, from running the cash register to scrubbing the toilets. If colleagues get in the weeds, they aren't chewed out. Anyone with a free minute will step in to help. Everyone is invested in the restaurant's success and moves in the same direction, not just covering their own butt. And that, Nardello says, allows them to concentrate on goals such as improving customer service and pushing per-ticket sales.

"This team is so important," he says. "They made the restaurant with me. They built it to where it's at now."

In 2008, Nardello's became the highest-grossing Wingstop location, pulling in more than $2 million, a distinction he's retained since. His journey has taught him that small realistic goals are what make the bigger accomplishments possible. "It sounds really simple, but it's the truth. Every day, I look back and say, "OK, you know what? We did X amount of sales yesterday. Let's beat it today.'"

But that sales figure isn't what he's most proud of. Earlier this year, he partnered with one of his brothers to open a second Wingstop location a few miles away, a bittersweet triumph, considering their father's illness had prevented the Nardellos from pursuing their original plan of opening three Wingstops in five years.

Even more gratifying, his father, Lou, is still involved in the business. "He, believe it or not, comes to work with me seven days a week," Nardello says. "He's actually my guide. Whenever I have a question, everything's run through him. I ultimately make the decisions, but I'm only 39. He's been in business his whole life. We have a unique way of communicating. I can almost read his mind. I think just like him, so the apple didn't fall far from the tree."