How Social Franchising Is Bringing Jobs to the Developing World

By Jason Daley
April 19, 2014
This story appears in the April 2014 issue of Entrepreneur. Subscribe »

Franchising is a powerful business model capable of efficiently delivering to the masses such varied resources as oil changes, emergency medical care, accounting services and jelly doughnuts. But could it do even more? Philanthropists are considering whether the franchise model can be used to bring vaccines, contraception, clean cooking fuel, food and other basic necessities to people in the developing world. The idea, known as social franchising or microfranchising, is beginning to catch on. After a few years of experimenting, the aid community is refining its approach and is ready to make social franchising a major plank in the way nongovernmental organizations (NGOs) assist the world's poorest regions.

The model is similar to commercial franchising, but the bottom-line goal is not pure profit--although many social franchises do aim to become self-sustaining. Rather, these organizations measure success through the number of people they feed, vaccinate or otherwise serve, and the number of franchisees provided with jobs.

In general, a social franchise, often sponsored by or spun off from an NGO or aid organization (although there are many independent social franchises), creates a network of local entrepreneurs who sell products or services door to door or from their homes. For instance, World Health Partners, a nonprofit launched in 2008 in India, recruits people in remote rural villages with limited access to healthcare. Through cell phones and portable computers, these reps connect their neighbors to a doctor in a larger city for a telemedicine session.

Other franchises offer internet connections or the use of cell phones, fortified dairy products, family-planning materials and even beekeeping supplies. Most social franchises rely on charitable donations or grants to stay in operation, but as the businesses become more sophisticated, many are hoping to reach self-sustainable levels.

Chuck Slaughter, founder of clothing and gear company TravelSmith and an entrepreneur who has helped turn around several international apparel brands, started his social franchise, Living Goods, in 2007, delivering lifesaving products to the poor by harnessing the power of the market. Using what he calls the "Avon lady" model, his crew of franchisees go door to door in villages in Uganda and Kenya, selling basic medicines, healthful foods, high-efficiency stoves, solar lights and other health and safety products. 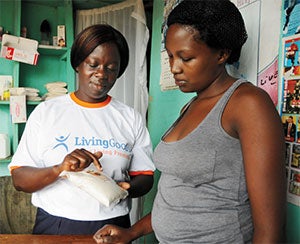 Living Goods provides working capital loans to its agents, who earn sales margins of 15 to 25 percent. The company's goal, besides improving the livelihoods of its agents, is to treat deadly diseases in children, as well as to improve the health and income of its customers. With local on-the-ground knowledge and a desire to increase their profits, Living Goods representatives often venture into areas that are passed over by aid organizations.

Living Goods isn't self-sustaining yet, but Slaughter says the franchise is moving toward that goal. Much of that will come from the introduction of private-label products, designed by the company, which will reduce margins. Living Goods is also harnessing technology, using mobile phones and smartphone apps to gather market data that will help sellers market products directly to individual villagers.

"I've been doing this for seven years, and we're structured as a nonprofit," Slaughter says, "but the longer I'm involved, the fewer distinctions I see between ordinary franchising and what we do." 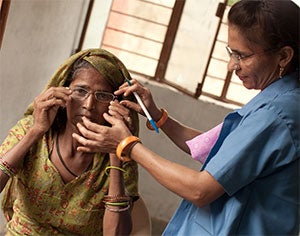 VisionSpring, which sells eyeglasses to people in more than 20 countries, followed a model much like Living Goods when it was founded in 2002. But simply selling glasses wasn't profitable enough to support sales reps, so the company changed the way it operates: Now the majority of its 15,000 "Vision" entrepreneurs are health workers allied with other organizations. VisionSpring teaches them how to dispense reading glasses, so that selling glasses can become an extra source of income. For the 703 million people who need glasses--the vast majority of them in the developing world--a pair of simple reading specs can improve their quality of life or help them find employment, especially for high-detail work such as weaving.

But VisionSpring also has a second model, one that has seen success in India and El Salvador. Instead of just selling reading glasses, entrepreneurs are associated with an optical store in a larger town. They travel to communities, selling glasses and eyedrops and treating common eye problems but are able to refer more complicated cases to the optical store. "We call it the hub-and-spoke strategy," says Jordan Kassalow, founder and co-chairman of VisionSpring. "It's like LensCrafters meets Mary Kay."

But after years in the nonprofit world helping millions of people, Kassalow is convinced that VisionSpring needs to be a viable business to reach a significant number of the millions more who need vision care.

"If we were a charity, we'd be really proud of ourselves," he says. "We recover $7 from the marketplace for every $10 we spend. But if we aren't sustainable, we'll be scaling those losses as we grow. We don't want to make ourselves more dependent on charity. We recognize there just aren't enough philanthropic dollars. Unless we develop a viable business model, we'll never be able to scale enough to make a dent in the overall problem."

As Kassalow and his team refine the way they do business, they're getting close to sustainability. They estimate they will break even in El Salvador this year. In India, they will cover 80 percent of their costs. But the main reason Kassalow wants his business to be self-sustaining is to demonstrate to multinational companies that there are ways to find and sell to the world's poor, and that the endeavor can be both philanthropic and profitable.

"We're so small compared to these $8 billion or $10 billion companies. If we help just half a million of the 700 million people who need glasses, we'll be wildly successful," Kassalow says. "But if one of these companies sees our success, they can help 100 million people easily. If they came in, we'd feel pretty proud to be the catalyst." 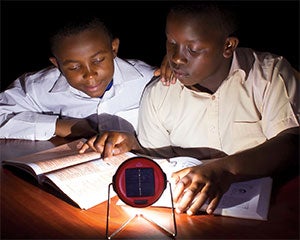 Greg Starbird is CEO of the HealthStore Foundation, which franchises 65 CFWshops (the name stands for Child and Family Wellness) in Kenya and 56 One Family Health locations in Rwanda. He's like to see his business become sustainable but knows he has to be realistic. "Nowhere in the world is healthcare delivered without subsidies of some sort," he explains. "We are trying to figure out ways to reroute those subsidies into the system so they become revenue for our franchisees."

The franchisees for CFWshops, typically trained nurses, spend roughly $7,500--a vast amount of money in the region--to open their small-scale drug stores and health clinics, which chiefly serve subsistence farmers in rural areas.

"Our fundamental concept is to provide access to drugs and healthcare through stripped-down drug shops and clinics," Starbird explains. "Currently, every link in the healthcare chain in the area is severely compromised. There is inadequate information. Assessment is poor. Drugs are substandard. There's an irrational use of antibiotics. Treatments don't reach patients. All of this leaves people sick and dying for no reason.

"But it's not because people are so poor," he continues. "It's a systemic issue. In that context, our concept is a standard-format, high-quality, low-cost system that can operate in small clinics. We observed that among business models, franchising seems to maintain brand standards and scale well and does that efficiently."

Starbird has consulted with members of the business franchise community to help streamline and organize CFWshops, and he believes there's much more that for-profit franchises could do. "We're one of the only groups, if not the only, that have worked explicitly with people who have built large franchise systems. We get real operational advice from them," he says. "I think there are huge opportunities for businesses with social benefits that go beyond the boundaries of NGOs and development work." 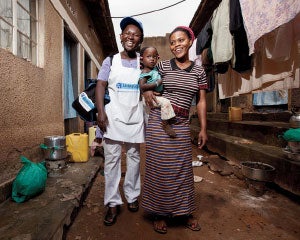 In fact, this year the International Franchise Association (IFA) will reveal the results of its Social Sector Franchising Task Force. Consultant Michael Seid, a franchise veteran and chairman of the task force, believes there are many ways the for-profit franchise community can help social entrepreneurs.

"Scott Hillstrom, chairman of the board of the HealthStore Foundation, pigeonholed me at an IFA convention a decade ago," Seid recalls. "I had no interest in social franchising. But after five hours of talking with him, I'd agreed to go to Kenya. He asked me, 'Have you ever saved a life through your work?' And I never had. Franchising brings the ability to sustainably and consistently provide quality products and services to populations that have never seen that before.

"Did you know 50 percent of drugs in sub-Saharan Africa are made of chalk?" Seid adds. "Think of that. Social franchising can help control the quality of medicine just like Subway or McDonald's controls its food. It's really no different than any other franchise system."

Seid and the IFA task force are creating a mentorship program that will enable franchising leaders to advise social enterprises. They are also creating model operations manuals and guides for NGOs on how to operate franchises efficiently.

But social franchising is just one strategy in a new world of market-driven solutions to poverty, one that includes micro-credit, social venture capital and more traditional vehicles such as grants. The Skoll Foundation, which supports social-entrepreneur-led organizations, has been so impressed by the impact of World Health Partners that it has invested in leveraging the nonprofit's microfranchising model to provide energy to rural areas.

"Microfranchising is a tool that may or may not be appropriate, depending on the impact you're after. It fits into an overall ecosystem. But it's exciting," says Sally Osberg, Skoll Foundation president and CEO. "It just shows you that once you unleash the entrepreneurial ambitions in people, there are all types of opportunities to build on."