The frozen dessert franchise, in business since 1987, has become the poster child for online engagement in the franchise world.

Apparently you can teach an old dog new tricks: Just look to the social media efforts of stalwart frozen dessert franchise Tasti D-Lite. The Franklin, Tenn.-based company, in business since 1987, has become the poster child for online engagement in the franchise world.

Along with operating an active blog and providing in-store iPads that serve as customer information kiosks and digital guestbooks, the company has instituted an innovative loyalty program. Patrons earn TastiRewards points by sharing their experiences with friends and followers online. Like with most rewards programs, customers earn points toward free treats each time a cashier swipes their TreatCard. But they can earn even more points if they link the loyalty card to online profiles. Then, when the card is swiped, a message--such as: "I just earned 5 TastiRewards points at Tasti D-Lite Columbus Circle, NYC!"--is automatically sent to the customer's Facebook and Twitter networks. The single swipe also checks the customer in on foursquare. Often, the automated posts include a link to a coupon, so a patron's loyalty generates a benefit to his or her entire network. 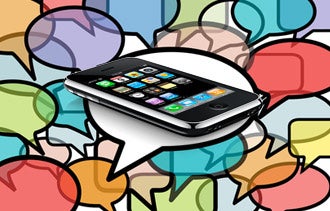 The company has found that one in five TastiRewards members are generating connections to at least one social network, and 18 percent of those are generating automatic check-ins on foursquare.

"People are talking about our product online, and they're passionate about our brand, so we wanted to be part of the conversation," says BJ Emerson, vice president of technology and head of social media for Tasti D-Lite. "We've put some mechanisms in place where we're now rewarding our customers for their digital activity. People are responding very well to that."

Tasti D-Lite doesn't reveal sales figures. Last year, the company was unranked on the Franchise 500®; this year, it comes in at No. 331.

The 59-location franchise has found that its most engaging social media content isn't necessarily directly related to the business. For instance, when Emerson posted to the company's Facebook page a Women's Health article about the best songs for runners and asked fans, "What's on your playlist?" the responses rolled in. Tasti also offers value to its fans with promotions, like TreatCard giveaways during Tasti Trivia contests on Twitter.

Tasti D-Lite is smart for undertaking an active social media stance. According to a recent study by marketing agencies Ogilvy & Mather and ChatThreads, patrons of major fast-food franchises McDonald's, KFC, Taco Bell, Subway and Wendy's were more likely to pull out their wallets after being exposed to social content on sites like Facebook and Twitter. Of people exposed to McDonald's social touchpoints, there was a 45 percent increase in the perception that the fast-food giant provided the "best value" for the money. And people who were exposed to social media for KFC were seven times more likely to spend more than they did before connecting with the brand online.

Still, franchises in general have been notoriously slow to adopt social media operations. "It's been years now, but we're still trying to educate franchisors and franchisees in why you should be using online marketing tools," says Deb Evans, president of Computer Explorers, a tech education franchise, and co-organizer of FranCamp, a Nashville, Tenn., social media training event for franchises. "Yet there are a lot of companies that are jumping in now and testing the waters."

Evans says franchises need to be careful not to post earnings claims or other confidential information that could break federal disclosure laws. "It used to be all about what franchisors disclosed to prospects verbally, but now franchisors have to watch what they put out online, because that stuff never goes away," she says.

National vs. Local Engagement
There's a debate in the franchise world about the best way to manage social media outreach. Many franchisors try to keep their arms around social media from a branding perspective and tell their franchisees to stay out of it. Yet, with this method, it can be a huge challenge to effectively support all locations with relevant content on the local level.

Tasti D-Lite is at the other end of the spectrum: The company takes a position of leadership but walks beside franchisees to co-manage their social media efforts. "The franchisees are the ones who are local with their customers," Emerson says. "We need to steward the brand, but we want to empower our franchisees to use these tools--we don't want to control them."

"We might have a great online experience, which any franchisor can manage, but if the program fails at the line level, then we've failed."
--BJ Emerson, Tasti D-Lite

Emerson says a franchise's multilayered business model makes adopting a sound social media strategy challenging. In designing digital Tasti D-Lite programs, the team had to consider how the initiatives would be implemented in the retail environment.

"I have to communicate to all of our franchisees, and they have to communicate to all of their employees, so that when someone comes in and shows their mobile device to get a deal, we don't look at them like they're crazy," Emerson says. "We might have a great online experience, which any franchisor can manage, but if the program fails at the line level, then we've failed."

Emerson still manages Tasti's parent Twitter and Facebook accounts, but in 2009, the company started encouraging franchisees to get involved on a local level, too. Tasti now has 35 individual Facebook accounts.

"We start to mention social media when potential franchisees come in for Discovery Days," Emerson says. "If they want to open a Tasti, we tell them we want to be a social-friendly brand, and we're looking for franchisees who are interested in engaging customers online. Then, during training, we'll spend a few hours on social media."

For Tasti franchisees who are new to the social media game and unsure what to share online, the company has created a content library of potential posts. From several years of trial and error, Tasti has a pretty good idea of what works and what doesn't online. Franchisees can simply pull content from the library and post it to their Facebook and Twitter profiles.

Massage and spa franchise Massage Envy also encourages franchisees to embrace social media. The Scottsdale, Ariz.-based company not only operates corporate Facebook and Twitter accounts and the Touch of Wellness health blog, but each month distributes to franchisees a social media calendar with suggested Facebook and Twitter posts that easily can be customized for individual locations. Additionally, at its annual convention last year, Massage Envy held several sessions on social media to help franchisees understand the benefits and prepare them with the tools they need to be successful, according to chief marketing officer Susan Boresow.

"Social media is a two-way street: We engage with our followers, and they in turn engage with us," she says. "We track the conversations taking place online and learn from them. We like to know when a customer had an amazing experience at one of our clinics and when they did not. This feedback helps us constantly improve our business and deliver our vision. Not to mention, our fans and followers appreciate being informed of new promotions and programs taking place at their local clinics."

Tasti doesn't actively recruit potential franchisees via social media. However, new franchisees have said they chose Tasti over another franchise because of its position online and the loads of positive user-generated content.

"We went from complete social negligence about four years ago to social prominence, and it has become a competitive advantage for us," Emerson says. "This is who we are; it's part of our culture. And if you think this is for you, we'll train you to do it, too."

A New Slice of the Pie
Going social has paid off in a big way for the once-floundering Domino's Pizza franchise. Ramped-up social media efforts played a significant role in its nearly 10 percent year-end sales spike in 2010, according to Chris Brandon, a public relations manager for the company.

When Domino's introduced the "inspired new pizza" recipe in 2010, the company had about 500,000 Facebook fans and 10,000 Twitter followers. Now, it has more than 4 million fans and 100,000 followers--and a completely refreshed brand.

For Domino's Pizza, ramped-up social media efforts played a significant role in its nearly 10% SALES SPIKE at the end of 2010.

"A lot of people who had written us off or hadn't tried Domino's in a long time gave us a second chance after seeing the positive feedback on social media," Brandon says. "Through social media, we're able to find out how they came back, why they came back and if they're pleased they rediscovered us."

Domino's is still trying to figure out a way to push online engagement down to the local franchisee level, but for the time being, the executive team is sponsoring several interesting programs. For instance, the company has asked customers to share photos of their pizzas online, posted prominent signage of "Pizza Tracker" feedback in New York's Times Square and hosted a massive Facebook giveaway of its new Artisan Pizzas.

"We've learned that not only is social media great for keeping the consumer informed, but we're also able to get that real solid two-way interaction going," Brandon says. "It helps us to keep getting better, keep innovating and keep doing what we need to do to give people what they want."