Meet the Chefs Who Are Bringing Quality Food to the Masses

By Jason Daley
December 12, 2013
This story appears in the November 2013 issue of Entrepreneur. Subscribe »

Bradford Kent spent seven years working on his dough. The Culinary Institute of America grad read every book available on pizza-making, testing hundreds of combinations of flour, yeast, water, salt and olive oil before finding the perfect crust, one that requires an alchemical blend of three separate doughs and a night in the fridge. When Kent finally saved up enough money to open his wood-fired pizza shop in Los Angeles, Zagat ranked Olio Pizzeria & Café as one of the top 10 destination pizzerias in the U.S.

For most chefs, creating one of America's best pizzas would be a crowning achievement, and there's no doubt Kent is proud of his pie house. At the same time, he, like many young chefs, isn't satisfied with serving an artisanal pizza or five-course meal only to the privileged few who can afford a table. 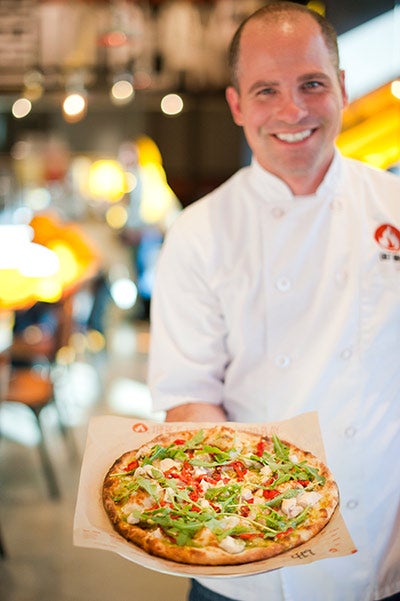 Foodie culture has raised the culinary IQ in the U.S. over the past decade. Now, instead of hiding away their talents in fine-dining restaurants, elite chefs are looking to share their ingredients and ideas with a wider audience. That thinking is why Kent joined with the team behind Wetzel's Pretzels to launch Blaze Pizza, a fast-casual franchise that serves up customized pies in about six minutes, for less than $8. With five locations open and 170-plus in the pipeline, Blaze is one of dozens of chef-driven fast-casual concepts to make an impact recently.

"Every chef wants to make a difference and wants people to eat well," Kent says. "There's nothing cooler for a chef than seeing tens of thousands of people eating their food and blogging about it. It's way more exciting than making 30 plates per night. This is more important, and most chefs want to be a part of something like that."

In recent years, fast casual--a restaurant format in which diners typically order at a counter and have the option to customize their choices--has become the playground for celebrated chefs. Southwestern food guru Rick Bayless runs Xoco, which sells updated Mexican street food. Bobby Flay's Burger Palace chain offers 10 regional burgers in 15 locations across the Northeast. Tom Colicchio, the restaurateur behind Craft and head judge on Top Chef, has a fast-casual sandwich shop called 'wichcraft with 15 locations in New York, one in San Francisco and another in Las Vegas. Shake Shack, the 31-unit burger stand launched by New York luminary Danny Meyer, is slowly expanding across the country.

"The reason chefs are going into fast casual is very simple," says Darren Tristano, executive vice president of food-industry research and consulting firm Technomic. "Opening full-service restaurants is too risky. Fast casual allows chefs the latitude to create better-quality food in an environment convenient to customers and less risky and costly than an upscale restaurant."

But while more chefs are making the leap into fast casual, only a few are dipping their toes into franchising. "I think the reason many of them don't franchise is because they have the finances to grow their businesses independently," Tristano says. "They want to keep control over the quality and service. Those are very important to chefs." 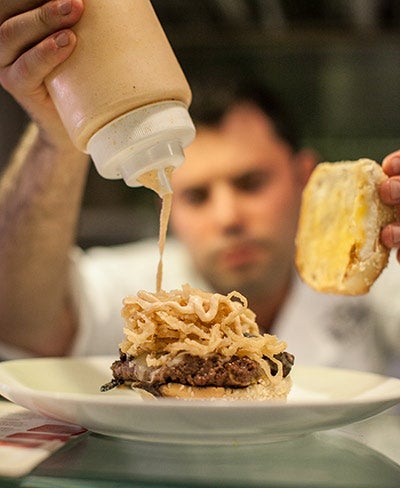 Still, a few high-caliber names, such as Olio's Kent, are willing to take a chance and leverage their concepts--and reputations--through franchising. Spike Mendelsohn, a popular contestant on Top Chef and Top Chef All-Stars, has dominated the Washington, D.C., culinary scene over the past half-decade, opening spots like Bearnaise and We, The Pizza. But Mendelsohn has also put his name and recipes behind Good Stuff Eatery, a joint venture with his family that opened in 2008 and will begin franchising in 2014. The upscale burgers-and-fries fast-casual spot has attracted the first lady and other Capitol Hill notables, but the Mendelsohn clan hopes Good Stuff will eventually serve high-quality ingredients to citizens across the country.

Good Stuff will walk that fine line faced by many franchisors: expanding while attempting to keep a strong focus on quality. Each unit will be required to have a culinary-school-trained chef on staff to oversee operations, an investment the Mendelsohns hope will keep their standards high and aid in keeping unit costs under control. "The young people who go to culinary school these days learn everything," says Catherine Mendelsohn, director of operations (and Spike's mother). "They know about employee management, food costs, negotiating leases. They are not glorified cooks; they're restaurateurs, and they are far ahead of what a chef used to be."

Kent doesn't believe a trained chef needs to be present at each Blaze Pizza location, but that's because he puts in most of the work beforehand. "We have really good training and systems," he says. "We can train people to make our dough in about 30 minutes. They don't have to measure, because one bag of flour and one bag of goodies--yeast, salt, etc.--goes into one batch of dough. It's an almost foolproof system. I would gamble and win that one of the least likely things to mess up in our system is our dough." 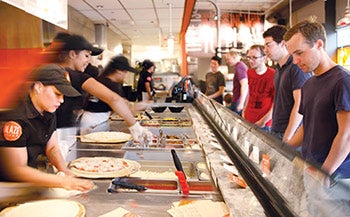 But just because he has simplified the crust-making process doesn't mean Kent has cut corners. In fact, his commitment to quality is one of the reasons the process is so simple. "I am a bulldog when it comes to ingredients," he says. "I don't give up. When we first started, I was told we couldn't afford to use extra-virgin olive oil in our dough. But I argued that because of its flavor we wouldn't have to use as much. I had to educate people on the business side about these culinary nuances, and they trusted me."

Kent got his extra-virgin olive oil and, because of Blaze Pizza's volume orders, was able to get it cheaply. He even helped the vendor learn how to pack and ship the product more efficiently.

Another popular chef, Mark Miller of iconic Santa Fe, N.M., eatery Coyote Cafe, has opened 13 restaurants in the past 29 years and done flavor consulting for 68 companies, including fast-casual and fast-food concepts. Earlier this year, he took a seat on the board of directors and a spot as culinary consultant for Boneheads, an Atlanta-based seafood and chicken fast-casual restaurant. Miller, who has opened restaurants in Australia and Japan, says fast casual isn't really new--it's just America catching up to the rest of the world.

"Most places have good fast casual, and it's something we've never had," he says. "In Italy, you can buy this great pizza on the street, or you can get a perfect bowl of ramen at a Japanese train station. Many countries have really good fast food, and Americans are realizing we can have that, too. People on the go who need a bite to eat don't have to settle for junk food. Good food is not more expensive than fast food. Having a dish with all-natural beef or pork costs $7.50, which is about the same as a Big Mac, soda and fries."

At the same time, Miller says, many fast-casual players misunderstand why the segment has become so popular. "Fast casual is not growing because it's cheap; it's growing because these places reflect where the values are for consumers," he says. "It's about social value and aspirational value. Natural pork, grass-fed beef, high-quality ingredients. Someone who produces an 18-ounce burrito in 20 seconds isn't going to compete with Chipotle. I think fast casual should be renamed "casual lifestyle' or something like that. Fast is not the real emphasis."

At Boneheads, which has six locations across the South, Miller hopes to strengthen the brand's identity and add splashes of flavor with his signature salsas. More important, he wants to help the franchise find its demographic and focus on what Gen X and Millennials look for in a restaurant experience: sociability, a value system and quality ingredients.

Dennis Friedman, another D.C.-area chef, recently opened his take on fast casual: Newton's Noodles, a spinoff of his popular restaurant Newton's Table. "As a businessperson, I wanted to grow, and I was approached by many different people to expand Newton's Table around D.C.," he says. "As I went down that road a little and did some soul-searching, I thought it would be great to have a second restaurant, but at what cost? I'd seen so many people stretch themselves too thin, then the quality starts to diminish."

Friedman noticed that the most popular item on his menu, and on the menus of other restaurants he has run in the past decade, was the fuzu, a customizable rice-noodle dish similar to pad Thai. "The answer," he says, "was staring me in the face. Fuzu was customizable, cost-effective, and all the flavors were already there. It was like it was meant to be and offered an opportunity to grow my business without reinventing the wheel. I could put controls in place to ensure consistency, cost and portion size."

But his big decision, and one faced by many chefs who enter the fast-casual world, will come a little farther down the road. When Newton's Noodles, which opened its first location in September, reaches five units, Friedman will decide whether to franchise. "I've known in my heart since day one that this is a restaurant concept that can go national," he says. "Right now we have all our systems in place and are tweaking them. Once we have more units open we'll reevaluate."

Whether or not a chef decides to franchise, fast casual scratches an itch most of them have. "Chefs are driven to this because they want to be entrepreneurs," says Good Stuff's Catherine Mendelsohn. "People eat in restaurants all day long now, but they aren't about to go out to fine dining all the time. They want wholesome, good food in a comfortable environment. Fine dining will never be out of fashion, but it's not the way to go for someone excited about food or who wants a presence in the food world."