Never underestimate the value of getting your ya-yas out.

By Jason Daley
March 12, 2010
This story appears in the April 2010 issue of Entrepreneur. Subscribe » 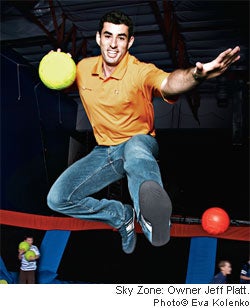 Here is the original pitch: Let's create a new "3-D" pro sport that involves a giant trampoline, two rotating hoops suspended 7 feet in the air and players who score by jumping through the hoops with the ball.

Investor Rick Platt and his son Jeff didn't buy it. But they did like the idea of that giant trampoline. So back in 2002, the Platts snatched up the patent and built an enormous experimental version in a Las Vegas warehouse. Would it be a fitness center? A venue for high-flying league sports? They were still trying to figure it out when kids from the skate park next door started banging on the doors, wanting to play.

"We kind of opened by accident," Jeff Platt says. But soon enough, they had set up a folding table with a cash box and a roll of tickets, and Sky Zone was born. The Platts added regular trampoline dodgeball games and fitness classes, but mainly, people just wanted to pay $9 to jump around for an hour in the 9,100-square-foot main court.

In total that first year, 130,000 people showed up, enough to persuade the pair to try test locations in St. Louis and Sacramento, Calif. Sky Zone pulled the trigger on franchising in 2009 and is slated to open its first in Houston this month, then Boston in June, with Chicago, Columbus, Ohio, and L.A. on the way. We asked Platt why the company is bouncing so high.

Can you describe your giant court?
It's made of regular trampoline material with extra stitching and D-rings for support. But we don't use steel bars; instead we have a patented cabling system, so if you land on a cable, it will give. Each location is different--you can go as big or as small as you want, from 500 square feet for toddler courts all the way up to 10,000 square feet. Plus we make everyone wear special shoes, like at bowling alleys. It keeps gum and dirt from getting on the surface.

Is this just a fad?
Our numbers definitely leveled off after the first year, but we've still been tremendously successful. We've been in Las Vegas for six years and we're still running strong, and we've actually had an increase in sales as the economy has trended down. People are looking for a cheap form of entertainment to distract them from their everyday lives. They can come to our place and pay about 10 bucks for an hour of happiness.

Who invests in a giant trampoline?
We've had hundreds of people inquire about franchises. Obviously this is capital intensive and needs half a million to a million dollars. Most of our franchisees are first-timers, but they're people who have dealt with active, healthy lifestyles and have had experience owning their own business.

You must pay out the nose for insurance.
It was a nightmare at first--nobody wants to insure trampolines. But we've got an insurer who's worked with us from Day One. There are two main problems with trampolines: falling off or falling through. You can't fall off our sides, and we have safety nets so you can't fall through. That eliminates the two biggest safety issues. And there are court monitors who control flow and movement on courts. Accidents do happen, but statistically our injury rate is about .01 percent.

What's next?
I was at Costco the other day and saw a volleyball net and thought, "Why didn't I think of that before?" So we recently hung a net up. We actually developed a contest we're running called "Invent the Next 3-D Sport." People submit applications, and if it works and is fun, we'll implement it.