The Top-Ranked Franchise 500 Companies Available in All 50 States

We looked at the top 20 businesses from our Franchise 500 to find a top-ranked franchise in your home state.

Companies often choose to franchise when they have created a successful business model -- the more locations can bring in, the greater profits for the company. Unfortunately, that success can also lead to too many franchises that can impact each individual location.

But smart franchises know their customers and know where the next best opportunity will come, so they focus on those areas.

And while McDonald's and other big-name franchises, like Taco Bell and Jimmy John's, are popular (and rank high on our Franchise 500 list), they aren't necessarily showcasing availability for new locations in particular states. Specifically, they don't offer territory maps on their websites.

For this piece, we examined the company website for every business in the top 20 of our Franchise 500 to see which provided a list or map of of available territories. For instance, Dunkin' Donuts's map shows USA availability: 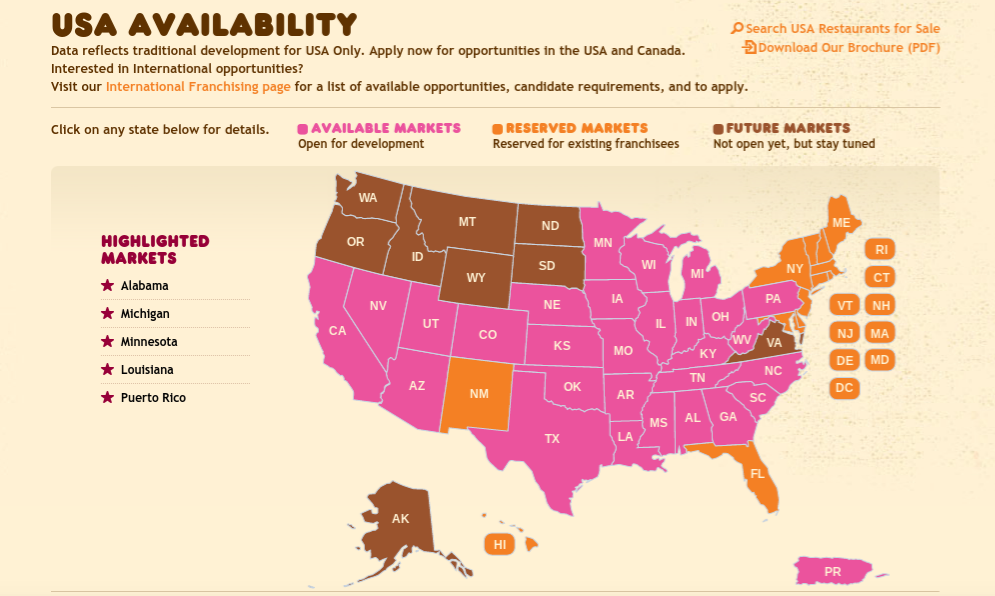 If you look at the Dunkin' Donuts map again, you can see that the company website says it is looking to expand in Michigan, but not Montana. There are several reasons a company might not say it is expanding in a certain state -- it might mean that there is no availability at all in that state, or it might mean that you have to go through a franchise development team to find an opportunity or it might just want to keep its cards close to the chest.

For example, The UPS Store claims you can work with a development team to build a franchise in all 50 states, even though the company website doesn't list any available territories in some states. For this piece, we didn't count those opportunities, because they didn't appear on the company's expansion map.

Check out the below list to see which companies on our Franchise 500 list are actively looking for new owners in your state.

Coming in at No. 2 on Entrepreneur's Franchise 500 list, 7-Eleven (behind McDonald's, which currently doesn't have an expansion map on its website pertaining to specific territories or states it wants to expand in) is the top franchise looking for new owners is various areas.

The states are listed below, but you can check out the companies territory map here.

It might or might not surprise you to know that you actually can't franchise a Dunkin' Donuts (No. 3 on the Entrepreneur Franchise 500) in the Northeast right now. The donut-and-coffee spot is known for its New England roots, but it's established itself there in a way it might not have in the rest of the country. That's why, when you look at Dunkin' Donuts' expansion map, you'll see a lot of availability in the Midwest, South, and Southwest.

Related: 5 Restaurant Franchises That Will Cost You at Least $1 Million

The UPS Store (No. 4 overall on the Entrepreneur Franchise 500) is the top-ranked franchise in just one state: New Mexico. However, it makes up for that by listing nine different available franchises in that state on the company website.

Sonic is ranked No. 6 on the Entrepreneur Franchise 500, and though the drive-in chain known for its slushies might not be the most natural franchise for cold-weather states, it's the top franchise on our Franchise 500 list to expand in states like Alaska and Montana. In fact, it even offers incentives for opening a business there.

Culver's (No. 13) is a good example of a company outgrowing its origins. The burger restaurant is available in 47 states, but it isn't available is Wisconsin, where the company was founded and where it has its headquarters.

Kumon might be the lowest-ranked franchise on this list, but it's still No. 20 on the Entrepreneur Franchise 500. That's not too shabby. Plus, it offers something that no other business on this list does: available markets in Hawaii.