By Jason Daley
September 20, 2010
This story appears in the October 2010 issue of Entrepreneur. Subscribe » 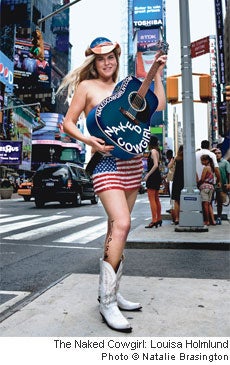 If you've been to Times Square in New York, you might have noticed an Old West-style showdown going on. On one side: The Naked Cowboy, aka Robert Burck, who has been a mainstay on the square since he started strumming his guitar in the (near) buff in 1997. On the other: Sandy Kane, a former stripper and comedian who has been strutting her stuff as the Naked Cowgirl since 2008. Not only is Burck suing her for trademark infringement, he's also trying to force her to sign a franchise agreement.

That's right, walking around in your underwear strumming a guitar is an actual franchise, registered in Tennessee by Naked Cowboy Enterprises. The terms are fairly simple--a $5,000 per year franchise fee or $500 per month, plus a 20 percent royalty from tips and appearance fees, which start at $1,000. Franchise rights include an exclusive territory and coaching by the cowpoke himself. Burck has had a handful of franchised clones--but at the moment the Naked Cowboy franchise has one lonesome, legitimate cowgirl: Louisa Holmlund, who strums in Times Square wearing a miniskirt, cowboy hat and pasties. We asked her what it's like to run a franchise in the (near) buff.

How does one become a Naked Cowboy franchisee?
In 2005 I was living in Germany and a friend's sister lived in New York and saw the Naked Cowboy every day. She said I should be the Naked Cowgirl, that I would do just as well. I'm very extroverted and adventurous; I've always had it in me. She asked the Naked Cowboy if it was OK and he said sure. I did it for three years, then went back to Portland, Ore., where my family's from, to study social work for two years. I came back to New York on June 15 and signed a franchise agreement. I've got three more years left to get my master's degree, so I'll for sure be the Cowgirl during the summers for at least that long.

Tell us about your average day.
I'm out there six days a week from 3 until 6 p.m., then from 7 or 8 to 11 p.m. I take Mondays off. I stand out there and I sing and play guitar, but it's not so much about the music, it's about the pictures. Robert the Cowboy is a showman, but my approach is completely different. I have to make people comfortable. I'm very sweet and nice, not too wild or crazy. It's a different dynamic being a Naked Cowgirl.

The Naked Cowboy is totally ripped. Does he require you to work out?
He goes to the gym every day, and for him being masculine is really important. I don't have a perfect body; I have more feminine curves and no six-pack. But not having a model's body makes me more approachable. I'm wholesome, not scary.

How do you improve business?
You market yourself with every group that walks by. You have to know which are more open and free, and which don't want your arm around them.

Where do you keep your money?
In my boot and in the hole in my guitar. Every night I have to shake them out over my bed.