You Want Extra Change on Your Pizza?

November 13, 2009
Opinions expressed by Entrepreneur contributors are their own.

Together with Entrepreneur Media, The Idea Village is pleased to introduce you to a few of the entrepreneurial characters who are crazy enough to think they can change the world. Because we believe it's these crazy ones who can--and who will.

The second Randy Crochet, CEO and co-founder of NAKEDpizza , sat down with us, he began rattling off facts about prebiotics, probiotics, fiber and even "gut bugs." Starting with merely a vision, NAKEDpizza was born when Crochet, a real estate developer, joined forces with Jeff Leach, an evolutionary anthropologist. Together, they set out to "hack" the $30 billion pizza industry and its proven business model of take-out and delivery by re-skinning it with a deep, compelling social mission. Rather than demonize fast-food, the unlikely pair decided to re-engineer it, proving that its pervasive reach can benefit people rather than exploit them with unhealthy food.

NAKEDpizza, however, is not simply a pizza place--never has been. It functions as a "communication company," with pizza as the distribution medium. Its mission is based on evolutionary science, digestive health and an understanding of the microbial world that influences health and well-being. NAKEDpizza has a story to tell and knows how to use technology to tell it. They aim not to preach, but to help people understand a simple and enjoyable way (who doesn't like pizza?) to achieve balance - not what you'd expect from a pizza joint in a rundown building that collected six feet of water during Hurricane Katrina.

But do not let this humble establishment fool you. While the pizza looks (and tastes) just like, well, pizza, the dough, sauce and cheese are anything but. The proprietary crust contains 12 whole grains, nuts and roots and is fortified with prebiotics (high grade fiber) and probiotics (good-for-you bacteria like you find in yogurt)--the only crust of its kind. The sauce and cheese are all natural with no added sugar and not surprisingly, considerably lower in calories. These pies are carefully designed with your health, your well-being and your waistline in mind.

Using pizza as a platform, NAKEDpizza has initiated a revolution--backed by science, information and nutrition--to change the way the world thinks about food. The idea is simple: transform a food that is notoriously unhealthy and make it good for you. And, while pizzas fund this lean operation, the mission powers the business, catapulting NAKEDpizza onto an international stage and capturing the imagination and the wallets of two billionaires, Mark Cuban and Jonathan Kraft of The Kraft Group. 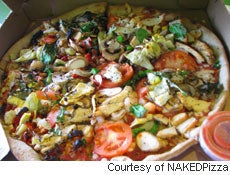 The Idea Village mantra, Trust Your Crazy Ideas, is best personified by clients like NAKEDpizza who aren't afraid to think outside the proverbial pizza box. Randy and Jeff applied to The Idea Village program in November 2007 with NAKEDpizza's original name, "World's Healthiest Pizza." Despite the less-than-appetizing name, we felt inspired by the founders' deep-rooted confidence and undying passion. Their BIG idea came well equipped with the opportunity to generate social impact and create jobs, not only in New Orleans, but around the country--and even the world.

This strong confidence and unwavering conviction has rocketed NAKEDpizza out of the starting blocks and into the race. The unlikely relationship with entrepreneurial guru Mark Cuban, began when Cuban launched his "Open Source Stimulus Package," and the NAKEDpizza team immediately formulated a way to make the shortlist. After several rounds of negotiations, they struck a deal. Cuban was in.

Cuban's investment coincided with the initiation of The Idea Village's signature IDEAcorps program in March 2009. Connecting MBA students and corporate volunteers to New Orleans-based entrepreneurial ventures, this annual event is designed to spur economic growth through innovation. Together, with a team from Depaul's Kelstaddtt Graduate School of Business, Randy and Jeff developed a focused marketing strategy and a gripping sales plan to meet Cuban's challenge of a 60 percent increase in pie sales. With little sleep, much determination and a daily dose of Twitter, NAKEDpizza met Cuban's goals. He was hooked.

Cuban gave NAKEDpizza an additional nudge when he introduced their business plan to Jonathan Kraft of The Kraft Group. From there, Randy and Jeff struck a deal with Kraft, activating the NAKEDpizza franchise plan. With the franchise company in full swing and a cascade of international media attention, NAKEDpizza has received thousands of franchising inquiries from around the world. A design team featuring The Designers Accord founder and former IDEO executive Valerie Casey, NAKEDpizza partner and Trumpet chairman Robbie Vitrano, MASS architects (Intelligentsia) and FHA Architects (Chipotle) are currently working on the first store prototype. The company is on track to sell out all major U.S. markets for development by 2010--well on its way to establishing thousands of "communication nodes," each surrounded by countless engaged, informed customers who share and advance the NAKEDpizza mission and mantra of "livNAKED."

While the rapid success undoubtedly excites the founders, it doesn't surprise them. Randy and Jeff never questioned that the world needed a NAKEDpizza. The pair spent three years perfecting the model and tweaking the now-famous crust. Rolling dough by day and making deliveries by night, tremendous passion kept their journey in motion. In a country inching out of the worst recession in decades, entrepreneurs like Randy and Jeff are reinventing capitalism. As Randy explains, "Entrepreneurs don't give a damn. They just go for it."

It is this passion that feeds The Idea Village--the entrepreneurs who see diamonds amidst pizza dust, an international brand within a devastated corner store and an opportunity to transform the way the world interacts with food.

So to all of you entrepreneurs, supporter and believers out there, Randy and Jeff not only welcome your competition, they encourage it. Though there will never be another team quite like this one, the NAKEDpizza guys offer the following advice for those passionate believers who are crazy enough to change the world, too:

The Idea Village was founded in 2000 with a mission to identify, support and retain entrepreneurial talent in New Orleans by providing business resources to high-impact ventures. To date, The Idea Village has supported over 255 New Orleans entrepreneurs through the allocation of over $2.2 million in capital, engagement of more than 600 professional service providers and MBA students and provision of 38,000 hours of business consulting services.