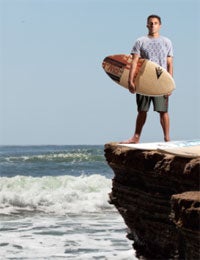 Matt Biolos, co-founder and head designer for San Clemente, Calif.- based Lost Surfboards, liked Firewire's products enough to order 250 of them when they debuted. He was denied. Firewire wanted to establish its own name, instead of supplying outside brands. Last year, however, Biolos finally struck a deal to have Firewire make a run of Lost-branded and -designed Firewires. Biolos is a believer, but he says it's hard to get other surfers to convert. "As long as we remain steadfastly spoiled with our ability to order custom surfboards, Firewire will always come in second," says the 40-year-old.

Firewire has a 10,000-foot warehouse in San Diego, but it makes virtually all of its boards in a factory it opened in Thailand in 2007. Price says developing the step-by-step board-making process from months of trial and error was Firewire's most challenging feat. "It was unbelievably torturous, stressful and expensive," he says.

Its latest line of sticks, Rapidfire, has a core of basic, beer-cooler-type foam. Carbon rods are inlaid at the bottom for flex; the top is lined with gorgeous finished bamboo for strength and stiffness. Vacuum bags are used to bind the inner materials before they're glassed in epoxy.

Price says the process and materials mean his boards are "50 times less toxic and emit 2 percent of the volatile organic compounds found in a traditional polyurethane surfboard."

After riding a Firewire design, marketing manager Chuy Reyna quit his job of 14 years to join the company in 2007. "It's rare to have that much difference in a product," he says. "This marketplace has been saturated with a level playing field of boards. This is so overdue."

The gear has its share of converts, to be sure. The company signed Taj Burrow as its signature rider in 2007, and he rode his Firewire to a No. 2 world ranking that year. And Biolos notes that seasoned professional Shea Lopez has ridden a Lost-branded model and raved about it. "You could buy one and say it's the best board you've ever ridden," Biolos says.

Long Beach Surf Shop in Long Island, N.Y., caters to core city surfers for whom 43-degree water in spring is like a walk in Central Park. The store carries Firewire boards proudly. The gear-maker, says shop owner Luke Hamlet, "is using technology to benefit surfers rather than its own costs."

At the factory in San Diego, boards are lined up like soldiers in marching formation. Price shows off a board that's been sliced into pieces. It's elegant and organized--its stacked materials beckoning like a piece of high-tech layer cake. Performance art rarely comes from a factory, but here it does.

"Materials have always led the advances in surfboards," says Pezman of Surfer's Journal. "If they get into lighter, stronger, more flexible dynamics that make the performance more desirable over hand-shaped boards, then those older boards will be toast."

He says that when foam boards finally took over surfing, it happened in 12 months. "That was 1959." It was the year of Gidget. It was the year that Hobie Alter, using Clark's original foam, launched a brand dynasty by churning out easy-to-ride, easy-to-carry longboards. It was 10 years after a man named Simmons invented the modern surfboard.