The second you hit the black, frigid water in full combat gear, the raft that's now speeding away starts to look like a luxury cruise ship. Mustering every bit of logic your cobweb-filled brain will provide, you astutely decide it must be the middle of the night. Not that it matters. Time means nothing right now compared to space--the space between you and the beach.

When you finally crawl ashore, your only reward is an impossible mission--a mission that takes a turn for the worse when the hostage you were sent in to rescue turns out to be two, the second of which has bloody stumps where his legs should be. Somewhere between the concussive thuds provided by the symphony of mortar shells going off above your head, you decide you really can't wait to get back to running your software company in New York.

Welcome to Leadership Under Fire, a three-day total immersion Navy SEAL training program for entrepreneurs and business leaders. Make no mistake: This isn't a fun-filled weekend of paintball and dress-up. It isn't a team-building exercise. It's hell on Earth--sea, air and land, to be precise. But what you call hell, Rob Roy calls home. For $5,700, he'll take you there. 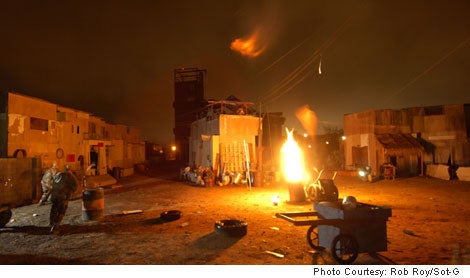 "You can't sign up for a program like this unless you want change in your life," Roy says. "There's no glory. There's no camera. There's no crowd. There's no graduation where there's people standing around to say, 'You did a great job.' We don't tell them they did a great job. Some people say it's humbling. But it's more of an education into the things they've forgotten since they first started."

Roy spent 18 years as a SEAL before starting Sot-G, a military consulting and private security firm, in 2005. He has since become something of a cult hero through his alter ego, Wardog, the character he plays in the Sony PlayStation's SOCOM video game franchise. His Coronado, Calif.-based company made $1.2 million in 2008, but that's where any similarity with the high-powered CEOs he trains ends. He's soft-spoken. He's reserved. And just when you think you have him figured out, he will crush your soul. Had your assistant look for videos of his program on YouTube? He'll make sure it's different--and worse--this time around. Proud of your second-place finish? Congratulations--you're the first loser. Now do it again. Ready for some shut-eye? He'll take it under advisement if you ever make it back to shore.

"People get in this comfort zone--'I know where the ending is. I can see the light at the end of the tunnel,'" Roy says. "Then we switch to something else, and they know it's a train."

One business owner who willingly stood on the tracks is Yacov Wrocherinsky, founder and CEO of Infinity Info Systems, a B2B software company in New York. He describes the experience as "visceral," a glaring understatement from a 49-year-old man whose first-ever swim in the ocean took place in total darkness at 3 a.m. Between that, lying on his back in the cold surf, carrying a log over his head while running in the wet sand and getting as close as any civilian can to combat, you could just about squeeze what he learned into the Grand Canyon. The high points? Train, define your mission and goal, gather intelligence, have a plan and embrace change.

It's the juxtaposition of the last two that, Wrocherinsky says, defines the parallel between SEALs and entrepreneurs. It's also what inspired him to create three contingency plans--best-case, worst-case and growth--for what will undoubtedly be an unpredictable 2009. Infinity saw revenues close to $18.5 million in 2008, the company's best year to date, but if a group as elite as the SEALs needs three plans, Wrocherinsky figures he needs at least that many, especially in this economy.

"Whatever the plan, it's going to change," he says. "The conditions on the ground will be different. In the line of fire, the difference between life and death is one second and one decision."

Tony Dilawri knows all too well about the impact of one decision. When one of his friends signed him up for Leadership Under Fire, he had visions of innocuous war games--visions that quickly became nightmares when his daughter found video clips of the program online. Once the shock had subsided, Dilawri, 45, spent the next several months training. He even went so far as to pay for two members of Roy's staff to travel to Canada, where he and his brother own 26 car dealerships, and give him a taste of what he was in for. After burning 8,000 calories the first day, he was well on his way.

Like Wrocherinsky, Dilawri emerged from the raw physical experience of Leadership Under Fire with some very cerebral lessons to take back to his business. Because, he says, of processes he learned directly from his SEAL training, Dilawri expects his company to make gains of 7 percent or 8 percent this year, even in an overall market that's down about 15 percent. Besides making his company more efficient, he says, having processes in place and sticking to them weeds out the sort of mediocrity he quickly learned was unacceptable to the SEALs

"We needed to follow instructions and we needed to do what they told us because if we didn't, we paid," Dilawri says. "And when you pay with the SEALs, you pay hard." 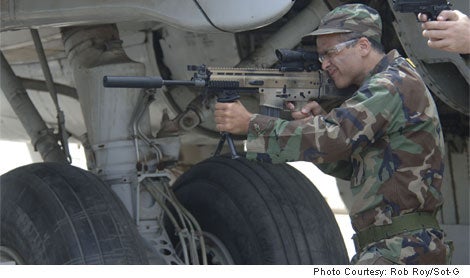 Of course, even a metaphor as grandiose as all this isn't much good without heavy emphasis on communication and teamwork. Fortunately, heavy emphasis is Roy's stock in trade. But it's one thing to strip down and mold a group of hungry kids who want nothing more than to survive long enough to get where you are. It's another to take a group of fortysomething alpha males and get them to appreciate anything other than the sounds of their own voices. But before he can make them better leaders, he has to make them better people by helping them understand who they are--and who they aren't. So, for the first day-and-a-half, every excruciating minute is geared toward that end.

"We don't tell them what they should learn or how they should feel," Roy says. "We put them in the spot where they think about it."

Once they've been broken down by his special blend of cold salt water and sleep deprivation, Roy can start teaching the CEOs the one lesson almost all of them need to learn--how to listen. The next step is to take the collective hell of the program itself and use that fire to forge empathy.

"When you make them feel that genuine quality like, 'Hey guys, this is going to suck'--they all know it's going to suck," Roy says. "A CEO going through the course learns to understand that people do have fears--it's not just numbers on a spreadsheet. The impact of his decision will affect those guys and how he's viewed by his peers and the people who work for him. If you have no loyalty to your people, you're not going to get the best product out of them."

To understand the sort of invaluable perspective that can be gained from Leadership Under Fire, one only has to listen to Dilawri's voice as he talks about finally completing the program. Again, there's no ceremony, no pictures, not even a pat on the back. But there is the best cup of black coffee he's ever had in his entire life.

"By the time it's all done, it's all the small things that really matter in life," he says. "It was a lot of fun and everything, but you really enjoy your freedom once you get out."