Indiana Jones' adventures have much in common with what makes entrepreneurs successful. Keep your head (and hat), hit the books and try to avoid the snakes.

"You call this archeology?!"

By the time Henry Jones had uttered those four iconic words to his son, Henry Jr., known to the rest of us as Indiana Jones (even if it was the dog's name), it was merely a confirmation of what the rest of us already knew--this guy does things a little differently. With a highly anticipated fourth movie in the Indiana Jones franchise set to be released this week after almost 20 years, it's clear that there are some valuable lessons to be learned from Hollywood's most famous archeology professor.

"Great characters in movies are heroes because they break the rules," says Mark Stevens, self-proclaimed movie lover and author of God Is a Salesman and Your Marketing Sucks. "Nobody wants to see a movie about someone who simply abides by the rules."

Wear the White Hat (Even if It's a Dirty Brown Fedora) 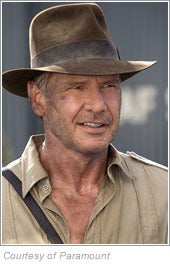 Hollywood, especially in the case of Jones, offers us the convenience of always knowing who the good guy is. While taking the high road might not always be easy, it beats having your face melted off. And it can certainly be rewarding in business as well.

"It's a lot harder to do the right thing and a lot easier to do the wrong thing every day of your life," says Joe Maddalena, owner of Profiles in History, a Los Angeles auction company that specializes in historical and Hollywood memorabilia. "That's the moral compass that you have to have inside of yourself. That's the decision you have to make when you wake up in the morning. Are you going to do what's right or are you going to do what's easy? What's right is often not easy, and that's what the Indiana Jones persona is about. He goes against the grain because he does have his moral compass."

The Book is Mightier Than the Whip
A big part of the reason Jones always manages to beat the odds is that he does his homework. The whip and the gun get all the attention, but most of the time, it's Indy's brains that keep him from losing their fedora-topped packaging. In short, without Dr. Jones, there would be no Indiana Jones. And while his intellectual side might not provide much excitement, it's an essential part of his success and something business owners can take to heart.

"Indiana Jones is this unique character who's this bookworm, yet he's this swashbuckling, whip-waving adventurer as well," says Jim Meuhlhausen, author of The 51 Fatal Business Errors and How to Avoid Them, who also coaches business owners using movie clips. "For the entrepreneur, that would be the technical expertise that they possess. Someone in IT may have started off as a computer programmer. I have rarely seen a successful entrepreneur who did not have a deep understanding of their business and of their customer."

Adds Maddalena: "Indiana Jones is a dichotomy. On one hand, he is the scholar, and on the other hand he is the adventurer. They co-exist in the same body. I think successful entrepreneurs have to have the dreaming mentality because that's what makes them tick. They're dreamers. They want to hit the rainbow."

But, Maddalena explains, just as Jones needs his academic side to survive in the field, entrepreneurs eventually need to add business sense to their dreams if they want to have long-term success.

"That's what the Indiana Jones character is--as adventurous as he is, he then has his educational and sensible and reasonable yin and yang pulling in his brain that are going to reel him in," he says. "An entrepreneur has to be cognizant that it's great to dream and want to push the envelope, but in the same hand, you've got to really think about it and think about the outcome."

"Snakes . Why Did It Have To Be Snakes?"

Despite his larger-than-life persona, one of the things that makes Indiana Jones so endearing is that, through it all, he's so human. He personifies the very entrepreneurial view that courage is not the absence of fear, but rather the ability to overcome it.

"When he's in a dangerous situation, he never stands up there all full of bravado," Meuhlhausen says of Jones. "You get that he has this fear, yet he goes through with it anyway, which is very entrepreneurial. It's not that we don't see fear. It's that we understand that failure is part of being an entrepreneur. We have to take those risks. We can be fearful, but that's what we have to do as entrepreneurs. We have to go for it anyway."

Think Outside the Ark 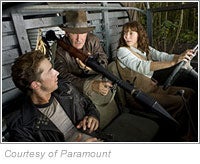 If there's one thing about Indiana Jones that any business owner can relate to, it's the idea that, no matter how well you prepare, sometimes trouble just finds you. But the real lesson is in his unrivaled ability to get out of that trouble, often using the road less traveled.

"There's the old saying that the fastest way between two points is a straight line," Stevens says. "The knee-jerk reaction is to find that straight line to get out of it. But what the smart entrepreneur recognizes is that the straight line is not the solution. People expect you to take the straight line, so the people who are lined up to cause you problems anticipate the move you're going to make and have already planned out how to block you.

"The ability to do something someone doesn't expect you to do is extremely powerful. Do something your opponents don't expect, putting them back on their heels, and when you do so, you're able to achieve something that you could not achieve if you followed the tried and true."

Never Forget Your Hat
Even when it looks like some ancient booby trap is about to cost Indy his head, he never leaves without his hat. It's what we identify him with, the sort of trademark any business owner should strive to maintain.

"If you take a look at the Indiana Jones series, it truly is a franchise," says John Martin, president and CEO of Alamo Drafthouse Cinemas, a Texas-based cinema-eatery franchise that expects to have 30 locations nationwide by 2010. "You can put up Harrison Ford's silhouette, but you have the fedora and possibly a whip behind him, and you'd know it's Indiana Jones. If a customer were to drive by in a new market and see [an established business's] iconic brand or sign, they'd know what to expect and will feel good about going to it."

Another benefit of staying true to your brand is that it becomes a symbol to remind you of where you've been and where you should be going.

Above all, the underlying quality that makes Indiana Jones a legend is the same thing that makes a truly great entrepreneur. After all, while most people chase metaphorical Holy Grails, this guy found the real thing--and still wasn't satisfied.