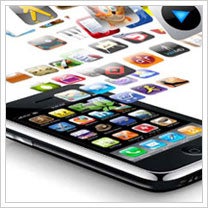 The buzz at Apple's Worldwide Developer's Conference in San Francisco continues to be apps, apps and more apps - for the iPhone of course. Those little programs that do everything from find friends to provide a virtual mug of beer are the hottest topic at the confab.

The New York Times is live-blogging the event while the Los Angeles Times is checking in with updates via Twitter. While there is much speculation about a possible new hardware version of the iPhone, so far the big news is about new apps that, for example, will allow iPhone users to get turn-by-turn map directions from TomTom.


The New York Times blogs that the announcement is an admittance from TomTom that "the iPhone and other smartphones are killing its market for standalone GPS hardware."

Other big news: News was circulated of possible software that will finally allow iPhone users to "tether," e.g. use their phones to get internet service to their laptops, which is not currently possible. Also, the iPhone will likely get peer-to-peer gaming capabilities, meaning users could locate nearby gamers via Bluetooth or wi-fi and challenge them to a battle on their favorite app games.

Meanwhile, the New York Times reports that app-making start-up companies are hot properties and that they're finding success selling out to larger corporations that want a piece of the billion-selling app market.