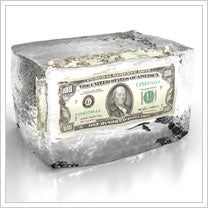 Add to all that the latest outlook from the National Association for Business Economists (PDF) and things, well, don't look good. At least for the next couple of quarters.

"While a few reports offer some glimmer of hope," says Chris Varvares, NABE president, "a meaningful recovery is not expected to take hold until next year. Further pronounced weakening in housing and deteriorating labor markets underscore the risks for 2009."

NABE experts see a 0.9 percent decline in GDP for all of 2009. All of the decline will come in the first half of the year--2.8 percent overall--and a rise of 1.6 percent should start things moving in the right direction in the second half of the year. Unemployment is a lagging indicator of recovery, so it is expected to rise to 9 percent by year-end.

Varvares says in the report that economic activity "is expected to turn up in the second half of the year and 2010 is expected to see modestly above-trend growth of 3.1 percent."

Two highlights in the report have significant impact for business owners. First, depressed capital spending will mean that "business investment will experience an exaggerated cyclical decline characteristic of economic downturns." An expected 9.2 percent decline in corporate profits will drive this factor.

Second, the dominant factor driving the economic weakness--which is no surprise given the nature of our economic activity--is a "retrenchment in consumer spending." When people don't have jobs or fear for their jobs, they don't spend.

On the good news side of the ledger, NABE panelists say that if growth dynamics play out as they expect, the economy may exceed its potential growth rate by 2010. The panelists are also confident that the U.S. will be the first to shake the effects of the recession, with a plurality, 34 percent, saying so. China is next at 28 percent.

Other outlook findings include:

Oh, and the $787 billion stimulus package? Well, panelists generally agreed it would boost GDP growth in 2009. How much is open to debate. As is the effect in 2010, with the panel evenly divided between half a percent, 1 percent and 1.5 percent.