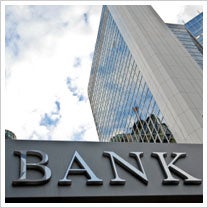 Citigroup's announcement that it made money during the first two months of 2009 is welcome news on Wall Street, which has been a good-news-free zone for weeks on end. And while Citi's CEO said the bank is operating at a profit, which led the Dow to surge 300 points by midday, it's pretty obvious that for the rally to sustain itself, consumer sentiment is going to have to change.

What also needs to change is consumer perception of large banking institutions. People aren't going to easily forget corporate retreats on the taxpayer dime and executive bonuses for executives who oversaw the near collapse of venerable institutions. But what's been bad for big banks has been good for community banks, according to a report from the Independent Community Bankers of America.

The report, "The Impact of the Financial Crisis on U.S. Community Banks: New Opportunities in Difficult Times," surveyed 743 community banks in February and found that more than half (55 percent) saw an increase in deposits as a result of new customer acquisition. And they are acquiring new customers at a faster rate than in the past. In fact, many banks--especially smaller ones with TARP funds--are looking for entrepreneurs, as Dennis Romero found out while researching Banks Eye Entrepreneurs.

Business owners are getting the message about community banks, too. Biz owners flocked to them, with 47 percent of survey respondents indicating they saw an increase in new business customers. That's good news for existing businesses and for people looking to start up. And here's more: Forty percent of community banks have increased their loan origination volume over last year.

"This survey clearly shows that the vast majority of community banks are well-positioned to survive the economic downturn," Camden Fine, ICBA president and CEO, said in a release, "and perhaps even reclaim some of the customers from larger banks."