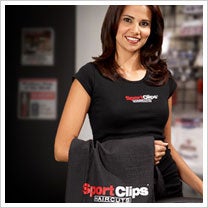 We recently started frequenting a local outpost of one of the fastest-growing franchises in the nation--Sport Clips. The concept alone has to make any entrepreneur green with envy (and probably green with cash if he happens to own one).

Sport Clips is a hair salon for men. Fine. Simple. Well done. Where Fantastic Sam's and Supercuts are unisex, Sport Clips offers a no-question, no-fuss, moderately priced place for manly men to get their manes trimmed. Guys who come here don't have to worry about catching a cloud of hairspray or inhaling the skunky vapors of a coloring job in progress. No--it's all clippers and buzzing sounds and Jim Rome on the tube here. But wait, there's more (and this is where Sport Clips appears to have an edge): Sport Clips has a three-pronged marketing bedrock with which it sharpens its shears (and crops its competition).

The first element is obvious. Sports sells. Men can keep their eye on the ball while doing something many don't like to do--getting their hair trimmed. Inside you'll find paraphernalia from area college teams (in this case, UCLA and USC banners, flags and stickers, the latter of which you can purchase). Hair-cutting stations are framed by lockers, each harboring an embedded television that's locked on ESPN. Levels of service have athletic themes, including the "Triple Play," (a cut, wash and scalp massage) and the "MVP" (add to the Triple Play a back and neck massage). This has the effect of making men more comfortable in what has, in recent years, been a woman's domain: the hair salon. Sure, guys are making themselves prettier, but they can grunt at the TV and pretend they're keeping score.

And this leads us to the second, genius aspect of the franchise: women. Our locale appears to employ only female stylists, all of whom wear tight, Lycra-esque black pants. The stylists are nice, but not too nice. The point is this: Guys, whether they admit it or not, are probably attracted to the nurturing aspect of this establishment. They want their hair in kind hands. Sport Clips delivers.

Third: It's more than a cut. It's therapy. We've known since way before The Barber of Seville that a hairstylist is more than a hairstylist. She's a psychoanalyst on the cheap. While Fantastic Sam's and Supercuts sometimes offer drive-through-level service, Sport Clips has found a way to build therapeutic hairstyling back into the franchise-haircut experience by offering messages as part of its Triple Play ($22 locally) and MVP ($25 locally) packages. Even a simple cut and shampoo gets a scalp rub that will nearly put you to sleep. (In fact, asked if customers do fall asleep at the wash bowl, a stylist said, "Yes, all the time.")

Our first visit to Sport Clips had us feeling a little self-conscious. The local franchise is in a small storefront that has its windows tinted. The back room, where the washing and massaging are done, is dark, with the feel of VIP rooms in certain gentlemen's establishments (not that we'd know); any likeness is probably purely intentional (and, again, genius). It's not a boy's club, however. And we've seen no grunting, cheering or unseemly conduct. If anything, the Sport Clips experience is quite professionally platonic. They take your name and the last four digits of your phone number, offer a frequent-cutter card, and track your visits via computer.

What keeps us coming back, though, is the no-fuss convenience paired with that little extra service bliss that just might be addictive.