Get Your Hands on Stimulus Money

By Jennifer Wang
April 8, 2009
Opinions expressed by Entrepreneur contributors are their own.

Gus Ezcurra knows energy efficiency. In late 2007, he founded Advanced Telemetry, a company that offers small business customers an energy management device called EcoView, which monitors energy consumption and delivers information on conservation and pricing. The device allows business owners to modify their behavior and save on costs of everything from water and electricity to natural gas and heating, ventilation and air conditioning systems.

Currently, Advanced Telemetry works mostly with residential customers and franchisees in quick-service and casual dining restaurants, but is in the process of expanding EcoView for use in convenience store chains and multiple-building environments.

Entrepreneur: Is the stimulus bill working in the energy sector?
Gus Ezcurra: Yes. We've already seen some benefits.
The stimulus has allocated $49.7 billion toward green energy technology. A lot of money is earmarked for renewable energy projects but almost half has been allocated to energy efficiency and an electric smart grid. 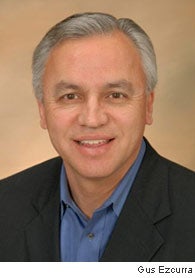 The government was looking to do some projects as quickly as possible, and saw that the fastest way to get money to the economy was to pass it to the state governments that already had programs in place for energy rebates and things like that.

A lot of the money allocated in the states was drying up for the rebates, but now the stimulus money has re-energized those programs. We're working with some state governments to get some quick approvals for rebates for our commercial customers. If you can get your local politician representative to kind of sponsor you with the Department of Energy, then things seem to move a little bit quicker.

I have to say that the government has made a big effort . to cut out as much bureaucracy as a government can cut out in these kinds of programs. We're quite pleased. The money is there and I know some of it has already gone to companies, especially alternative energy companies.

Are there downsides to the bill?
So far, things seem to be flowing pretty fast and they're working pretty aggressively. But the government is a bureaucracy, so we wonder about the paperwork requirement down the line. And even though $50 billion seems like a lot of money, there's probably never going to be enough money.

Tell me exactly how the average business owner can benefit from the stimulus plan?
The first and most obvious way is [through] energy rebates. If the average business owner does install these devices that are available . for energy efficiency, there are rebates available through local governments. Find those devices, talk to those vendors of products that you know can save you money and can make you more energy efficient. If there's a product that isn't on the approved list yet, work with the lender to get it on--all the state governments are incentivized to make this happen.

After that, things get a little more expensive and complicated, like putting alternative energy supply systems into your buildings. If you put a solar system, winter vine, or whatever works for your area or makes economic sense, there's money for that too. It's a little more complicated to get--a little more paperwork, and there is more money that needs to be spent.

A solar system costs you about $20,000, compared to our system, which is less than 1/10 of that. But again, money's available for that and there are a lot of incentives [for governments] to make that happen.

And beyond that?
Beyond that, there are programs for retraining employees. For example, if you have a business and you see an opportunity to go and install energy efficiency products, if you retrain your installers to install these energy efficiency products, there's government money available from both federal and state governments to retrain individuals into green technology.

So how quickly would you see these rebates?
Very quickly. If a business owner files rebates for products already on the [approved] list, they will get their money within six to eight weeks. If it's not, it might take an additional six to eight weeks to get the product approved.

Will small business owners really see a difference?
Yes. This stimulus package can really benefit these customers more than anyone else. The real place where this has an impact is with the small commercial business--the local machine shop, a quick-service restaurant, a small office building or a coffee shop.

Very large industrial and commercial factories or customers already have systems like this in place and are probably already working with their local utility [companies].

But now it's going to be easier for small businesses to identify products that are energy efficient to get rebate and support. And after [the rebates] . you're going to save money month-to-month. The savings go right to the bottom line, not to mention you're doing a good thing for the environment. It's a win for everybody.

How much money do your customers save using EcoView?
The savings initially are dramatic. Most companies don't have the [time] to focus on saving energy. So when we come in, the first few months, we can achieve savings as much as 30-40 percent. Then it flattens out to about 15-20 percent over the course of a year.

We say that at our price points, the payback for these commercial customers is within six months, but quite frankly, it's within two or three months in many, many cases.

Are there any obstacles right now in terms of making sure biz owners will take advantage of this opportunity?
[Lack of] information. These guys are busy running their businesses. They don't have extra people who are Googling for new energy efficiency products, so for them, it's a matter of, how do I find out about this? A lot of the emphasis really has to come from the suppliers of these devices for energy efficiency. I think we have somewhat of an obligation to avail ourselves of the stimulus money, make it known to our customers, and go out there and promote it aggressively as possible. Utilities do a pretty good job of trying to promote new programs, but you almost need to have a PR campaign by the government, or go door-to-door, knocking, to tell these guys about the deals.

People will do it. You just have to capture their attention and their time.

What are some simple, quick things business owners can do if they have time?
Some states are managing [the stimulus money] from a central state agency that is overseeing all this. Other states delegate that down to the utility level because they're closer to the customers.

The Department of Energy's website can give you information, but if you go to your local utility's website, you'll see tips and ideas for energy efficiency.

Start with that. You'd be amazed how a two-degree adjustment on your thermostat, hot or cold, has a positive impact on your energy for the month, for example. And you'd be surprised how low the prices are, especially after rebate programs, for these energy efficiency devices.

Do you think the stimulus will be a turning point for the energy industry?
I think it can be.

We are at a sea change in this country in terms of a brand new industry and a brand new opportunity. I think it needed to get kick-started, because a lot of the large corporations aren't really taking the lead. It's coming from smaller companies and the smaller individuals and even communities.so it's being driven kind of from the grassroots.

And because it's from the grassroots, you needed some capital--some push. This government stimulus money could be that push. It can get this thing started if it's done the right way.