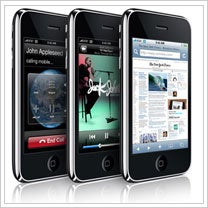 If you're purchasing phones for the office and you want to know which one is the bestseller among individual consumers, a report today indicates that the Apple iPhone 3G has just taken top-seller status in the United States.

According to research from the NPD Group, the iPhone 3G, which sells for as little as $199--down from the last generation iPhone's $399 entry level--has overtaken the ubiquitous Motorola RAZR flip phone as the king of American mobile phones. Both were designed in the U.S.

"The displacement of the RAZR by the iPhone 3G represents a watershed shift in handset design from fashion to fashionable functionality," says Ross Rubin, director of industry analysis for NPD. "Four of the five best-selling handsets in the third quarter were optimized for messaging and other advanced internet features."

The top five best-selling handsets among individual consumers in the U.S. follow: