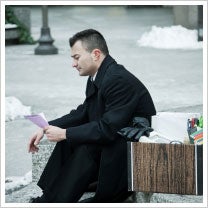 To nobody's surprise, jobs data from the Labor Department show January to be the worst month for job losses since 1974, which nudged the unemployment rate up to 7.6 percent, worst since 1992.

Projections for January's job losses had been in the 524,000 range. Preliminary numbers show the total to be 598,000. To make matters worse, the November and December numbers were revised downward. The January total is easier to understand when you consider 60,000 jobs were slashed January 26 alone.

The market has shed a staggering 3.6 million jobs since December 2007, when the recession officially began.

The education, health care and government sectors are hiring, but they aren't coming anywhere close to offsetting the losses in manufacturing, construction, retail and just about every other sector.

You'd think with a trillion dollars to play with they could get a little bit of everything. It didn't take this long when the financial services/banking industry was on the precipice.

A bailout package for a single industry: "We gotta get this thing passed or the economy could collapse. We can figure out the nuts and bolts later."

A bailout package of roughly the same size for the actual economy: "We better make sure we get it right and provide oversight."

If this jobs report isn't enough to spur action in Washington, in the hallowed halls of Congress, maybe it's time to reassign the people who shovel the BS at the end of every day after the C-SPAN cameras power down and make our elected representatives wallow in their own byproduct until we get something useful out of them. That would make for good television.