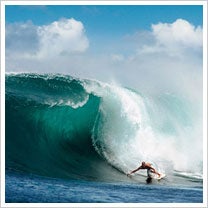 This much seems true: Entrepreneurs who start businesses that are in line with their field of expertise, such as startups that follow in the professions of corporate jobs their owners once held, are 40 percent more likely to make it, according to the book Race and Entrepreneurial Success.

But how do you narrow that down and find a niche that no one else has? One way to go is to think big. We're not talking just about dreaming big; we're suggesting that businesses that take into account America's historic weight gain might have an edge. The average American is 24 pounds heavier than in 1960 (so much so, in fact, that a University of Illinois study finds that the extra pounds have actually weighed on our fuel consumption because cars take extra gas to push all that ... well, you know).

And so, we recently came across a great niche business that is clearly thinking big: Dos Pistolas surfboards in Santa Cruz, Calif., makes boards especially "for surfers who weigh 160 pounds and over."

Sounds simple, but it's genius. You gotta think that most male surfers in their 20s and beyond weigh more than 160 pounds. But the surf industry is teen-driven. For a few decades now, board "shaping" has been geared toward high-performance, light-on-their-feet surfers. The thin, hard-to-float boards became so pervasive that easy-to-cruise longboards have made a serious comeback. The problem is that longboards sacrafice performance in the name of buoyancy. Unless they order custom-shaped "sticks," big guys who wanted to rip were out of luck.

Dos Pistolas is a classic niche leader that looked at a problem (big guys wanting high-performance boards) and came up with a simple solution.

As they say in surf culture, go big.