Never Stop Marketing--Until You Should 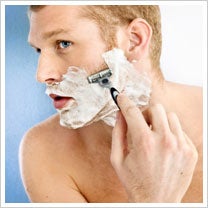 One of the many mantras you'll hear from the experts around here is that you should never stop marketing. No matter how much or how well you think you've made your point, there's always room for something more or something new to keep your product or service in the minds of potential customers. You want proof? I give you the Gillette and its indestructible uber-razor, the Fusion.

The Fusion comes in many forms: the Power, the Phenom, the Gamer. They're all just superficial improvements to the five-blade product, which by all indications has been killing the competition for some time now. Just when you thought Gillette might never stop adding blades (a Saturday Night Live parody commercial touted a 13-blade version), it appears the company's finally perfected the disposable razor. But a new TV ad seems like a classic case of "Be careful what you wish for."

The ad features an animated Fusion blade hell-bent on reminding loyal users that when the little blue strip is gone, it's time to put in a new blade. Full disclosure: When I do shave, I'm a proud Fusion man. So I can vouch for the fact that the next new blade I use might go dull sometime during President Franken's second term. And at about $3.25 a pop, I plan on waiting as long as I can to buy more. Apparently, I'm not alone, and Gillette's noticed.

As interesting as the strategy is, it's not the first time Gillette has used it. The company has already run an ad encouraging users of the Mach 3 to switch to the Fusion and even has a link on its website entitled "Why Fusion is better than Mach 3." Not that unusual, until you consider that the Mach 3 is...wait for it...made by Gillette. So even if your product is arguably the best in the world, there's always some reason to keep getting your message out there.

But in the grand tradition of every rule having an exception, there's Gatorade, or as it's now apparently known, G. Really? You're the overwhelming market leader in a market you created, with a ubiquitous brand based on a name with a great backstory (a story you told in a very cool recent commercial), and you're just going to chuck all that in the interest of creating fake buzz? And if that's not bad enough, there's the new ad campaign they've rolled out to go with it.

Full disclosure, part two: I'll jump at any chance to clown Derek Jeter. So the only real bright spot about these ads--he fails to dispatch a killer poodle with his bat, only proving further that he lacks power--is that it gives me more ammo. But I'd have killed to be a fly on the wall in this meeting--one that was presumably catered by Cheech and Chong. "So here's the plan: We're gonna take four or five of the world's most famous athletes and put them in a Monty Python parody. Kevin Garnett will dance, Misty May and Kerri Walsh will team up to play a three-legged person and Usain Bolt's ego will be personified by a giant acrobatic head."

I can't make this up. Check it out for yourself if you have nine minutes and a substantial surplus of brain cells to kill. I can't imagine why Tiger Woods passed on this one.

Full disclosure, part three: Kareem plays "Cap," Gatorade's answer to Tim, Monty Python's pyromaniacal Merlin character, and it's good for a laugh or two. But other than that, G gets an F.