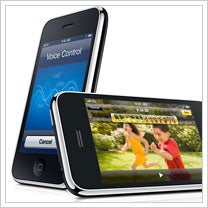 The big news at Apple's Worldwide Developer's Conference, as expected, was the unveiling of a new iPhone. This one's called the 3G S and, among its more advanced features, it has the ability to record video.

The 3G S is also said to be twice as fast for data as the current 3G model, which Apple is putting on sale for as low as $99. The 3G S will start at $199 for a 16-gigabyte model. It comes with a three-megapixel camera. And new software will allow users to plug into MMS technology that allows the sending of pictures via text message.


The phone also has a built in digital compass, text copy capability (which comes with updated software that will push to most interested iPhone owners), spotlight search (allowing one search of multiple applications such as contacts, email and text) and Find My iPhone for lost headsets.

Do you need this for your small business? Probably not. But if you're like us, you'll want it.

"iPhone 3G S is the fastest, most powerful iPhone yet and we think people will love the incredible new features including autofocus camera, video recording and the freedom of voice control," states Philip Schiller, Apple's senior vice president of worldwide product marketing. "And with a breakthrough price of $99, we are thrilled to get iPhone 3G into the hands of even more users who want them."