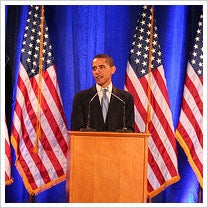 In his acceptance speech last night, President-Elect Barack Obama thanked members of the working class for contributing to his campaign, and he warned that it would take time to get the country's economy back on track.

His road to victory "was built by working men and women who dug into what little savings they had to give $5 and $10 and $20 to this cause," Obama said. The Democrat seemed to allude to a long winter ahead for the U.S. economy.

"The road ahead will be long," Obama said. "Our climb will be steep. We may not get there in one year, or even one term, but America--I have never been more hopeful than I am tonight that we will get there. I promise you: We as a people will get there."

He promised that he would help "Main Street" business owners as much as he would prime the Wall Street economy.

"Let us remember that if this financial crisis taught us anything, it's that we cannot have a thriving Wall Street while Main Street suffers. In this country, we rise or fall as one nation--as one people."

You can read his entire speech here.