Restaurants To Couples: "Be My Valentine ... Just Not On Saturday"

By Jennifer Wang
February 12, 2009
Opinions expressed by Entrepreneur contributors are their own. 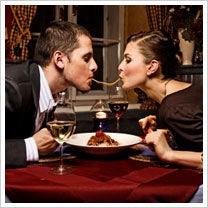 February 14 is typically a great date for restaurateurs, who rank the evening among the most profitable of the year. In fact, despite the recession, nearly half of the people surveyed for the National Retail Federation's (NRF) 2009 Valentine's Day Consumer Intentions and Actions Survey plan on dining out for the special occasion.

So when Valentine's Day falls on a weekday, it's a blessing; but when it falls on Saturday--a popular night already--as it does this year, it's more like a blow to the bottom line. What exactly do restaurant owners think about this year's untimely holiday? Probably something along the lines of, "Damn it, we're busy on Saturday anyway," quips Steven Hall, president and co-founder of New York City-based The Hall Co., a restaurant consulting and public relations company with distinguished clients like the Smith & Wollensky Restaurant Group and the Blue Fin at the W Hotel in Times Square.

He says that even if prix fixe menus tend to bring in more money, restaurants don't gain what they would from a much busier weekday. Plus, most guests come as couples, cutting down on the overall space available for diners.

Fortunately, it's not all doom and gloom. Valentine's Day is always busy, no matter when it is, so many restaurants are making special menus available on Friday and Sunday, and reservations are spilling over into those nights, too. Hall is also helping clients set up promotions that are more sensitive to the, well, heartbreaking state of the economy.

"At one of our restaurants, we're doing a [post-dinner] dessert tasting for $25 per person." He describes it as a lower-cost alternative to people who want a restaurant experience. "It's a way for people to have dinner at home, but ... they can still go out to get dessert."

As the industry could stand to see a little more love, that's the sort of savvy move recession-hit restaurants will need to make. Technomic, a foodservice consultancy, has forecast industry "growth" of -2.2 percent, due in large part to a contraction in consumer spending. The accompanying press release stated that 2009 would be the worst year performance-wise since the company began tracking information in 1972.

Regardless, retailers (and couples in love) overall can breathe a collective sigh of relief. The NRF's survey reported that despite the recession, Valentine's Day spending should reach $14.7 billion. Although this is down from last year's total of $17 billion, the amount is definitely still in the pink.

Apparently Cupid, though slowed, stops for no one.

Disclaimer: Valentine's Day spending may still be going strong, but be wary of break-ups caused by financial burdens. Sure, mistresses aren't faring well, but neither are spouses. In a Time article, Gary Becker, winner of the 1992 Nobel Prize in Economics, was quoted as saying, "Recessions tend to raise divorce rates."