Secrets to Surviving the Recession

Insights and strategies to take entrepreneurs from recession survival mode to prosperity.

According to a recent survey of about 2,000 California small-business owners, many entrepreneurs are seeing serious declines in profits, struggling with taxes and looking for help from the government to survive.

Joseph Benoit, a small-business banking executive for Union Bank, talks about the results of the survey, the financial challenges facing small-business owners and what they are doing to meet those challenges head-on.

How much of a burden are taxes on small businesses?
Well, I think that they are right up on top. Entrepreneurs are certainly looking for help, not only for tax relief, but relief in other things that have a direct correlation to the expense. Health care is obviously something that they're looking for help and some sort of relief on. Generally speaking, they're looking for relief from either the state or the federal government. Not only in taxes, small-business owners are looking for any type of help they can get. So there's a huge reliance, unlike any other year, on government agencies.

Which industries would you say are experiencing the most extreme declines in growth? 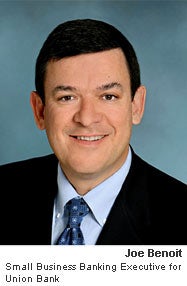 I don't know that we really defined it by industry. I think that across the board. I think that there is probably no industry untouched by what's going on in the current economic environment. But interestingly enough, in dealing with the entrepreneurs--and this might be one of the big ahas of the survey--about a quarter of the people we talked to were pessimistic about 2009 and expected their profits to decline. This is an increase over 2008. But we also found that 36 percent--call it one-third--expect 2009 profits to increase. So in this very difficult environment, you have this group of entrepreneurs, one-third of whom expected their profits to increase. And we sat back for a minute, scratched our heads and asked ourselves why?

These folks are risk takers. They have already made, in many cases, the tough decisions to decrease expenses, either through head count or through services they no longer needed or they are looking for alternative sources of revenue, in going out and trying to broaden their customer base and to do exactly what needs to happen for them to be profitable and successful.

That's actually more optimistic than the survey looked . . .
Yeah. It was very interesting. Last year that number was 50 percent. So 50 percent of the people that we looked at last year said we expect 2008 to be better than 2007, and this year it's one-third . This year it's decreased, it's one-third, but still I think that's a remarkable number of people that literally are working six or seven days a week, 10 to 12 hours a day and creating a livelihood, not only for themselves and their families, but for a small group of trusted employees.

The survey indicated that 2008 was about accepting the downturn, 2009 is about survival and 2010 is about conscious expansion. Can you talk more about this concept?
I think it's a hopeful concept. I think that the silver lining is that if the tough decisions need to be made and have been made in 2009, it will properly prepare and align these businesses for success, so then they can start rebuilding their businesses, possibly thinking about a larger piece of real estate and/or new equipment and/or going into hiring mode. So no one can predict--I wish we all had a crystal ball and could tell when we actually hit bottom and are on our way back up. But I think that it is probably entrepreneurial optimism to think that we will have seen the worst of this downturn sometime during 2009, and many of these businesses will feel like they're getting back on track in 2010 and beyond.

What can entrepreneurs do to put themselves on track for this growth in 2010?
I think they're doing it today. They're in survival mode. Many of these small businesses are doing what it takes to be very protective of their client base. It's important to collect accounts receivable in a timely manner. To look at possible equipment that they're not using and maybe selling it to generate cash and help their cash flow. They're making day-to-day decisions that will help them continue to prosper.