The Summit Series: Day One 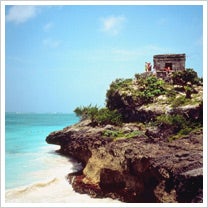 1:30 a.m.: The life of a writer all too often revolves around word count, deadlines and catchy leads. But today, November 20, I have been transported to a paradise of sorts. I have been deployed to Playa del Carmen, Mexico, where my only assignment for the next two and a half days is to cover The Summit Series, an event extraordinaire made extraordinary not only by the magnificent setting--a waterfront resort featuring spa services, tennis courts, and alluring pools--but also by the company I'm keeping during my brief escape from reality. More than 60 attendees comprised of entrepreneurs and some impressive movers and shakers have come together from across the country.

For some, it is not their first time--they met previously in Park City, Utah, where stories of the last Summit weave a tale of a vibrant getaway just like this one is promising to be. Others, like me, await in anticipation.

And the mastermind behind it all: Elliott Bisnow, cofounder of Bisnow, a national media company based in Washington D.C., who envisioned the possibilties of bringing bright, innovative, successful entrepreneurs all under one roof--or in this case, to one specified location just outside of Cancun--and made it happen.

It's the perfect forum to discuss ideas, address challenges and give back. And for many of the entrepreneurs I spoke with tonight, it's also the perfect opportunity to network while taking a much needed vacation. And while I retain the power of the pen, limitations do exist even in paradise: our destination must remain unknown (in other words, no mentioning the name of the resort) and no photos shall be taken after dark.

Tonight, there was a good dose of just about everything. A buffet-style, Mexican feast under dim lighting, a free-flowing open bar and good company (enhanced by the glowing post-dinner bonfire, s'more-making activity, and the buckets of Coronas delivered by resort employees that, needless to say, kept the fires burning).

All in all, the evening left a good first impression. Attendees were there to meet others and share ideas, and while a couple were skittish to share too much around me, overall, the tone was trusting and open. It was reminiscent of freshman year in college all over again when guards were let down, energy was high and the sole purpose in sight was to just make friends. But a recap of the notable moments follow:

I enjoyed sharing Mexican coffee with Jeff Fissel, cofounder of KZO Networks, which specializes in digital training videos. I learned how he just secured a round of financing, how he went after big-name clients and was able to secure Cisco Systems very early on and how he's adapted to the economy by focusing on ROI when marketing his services. But I also learned how this 25-year-old entrepreneur has yet to find a woman who will understand his passion for and devotion to his business.

I scoured for vegetarian food at the buffet and haphazardly met Eben Pagan, founder of Hot Topic Media, who just happened to be doing the same thing. Using his entrepreneurial character, he took charge of the situation and asked a resort employee for help and then very kindly walked me through the options available: rice, guacamole, tomatoes.

Later on, around the bonfire, I caught a glimpse into the life of a serial entrepreneur when James Siminoff, founder of Phonetag, revealed his need to start another company as soon as he feels that the previous one can stand on its own--usually devoting 80 percent of his time to his new endeavor and 20 percent to the old until the shift is official. His talent is starting businesses and it's during the challenges of the startup phase that he is driven and passionate and in his element. So what keeps him going during an economic downturn like this? For him, being an entrepreneur is not a career nor a chosen path but simply who he is. But as he's about to start yet another company, it certainly doesn't hurt that his successful track record attracts venture capitalists looking for a relatively safe bet in an economy where nothing is predictable at the moment.

And I spoke with Ben Goldhirsch, founder of GOOD Magazine, who hasn't yet had to lay anyone off due to the economy but who spoke of how heartwrenching it would be if he ever was forced to and wondered whether there is a good way to go about doing it. But the concerns that come with being an entrepreneur haven't held this entrepreneur back: In fact, he and his team are just finishing up a three-year documentary on Barack Obama scheduled to air on HBO in April.

I've been writing about entrepreneurs for five years, but being surrounded by them is a whole different kind of experience. And I can tell that they, too, are enjoying being around like-minded spirits. As James (aka Jamie) put it, one of the reasons he traveled all the way to Mexico was to revel in the experience of being in a crowd of people who are instinctively able to communicate with each other at a higher, more complex level--even if they didn't know each other previously. Entrepreneurs inherently understand each other. They fight the same battles, deal with the same challenges and are driven by the same motivation. Some of the entrepreneurs I spoke with tonight talked about how the economy is actually working in their favor: they are able to find top talent and they have the luxury of being in business when competition is scarce. And a couple brought up the fact that this economy will weed out the weak and keep the strong. Only those who are true entrepreneurs will survive.

More to come from Day 2 at the Summit...