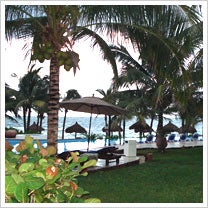 There's nothing quite like an open bar of free-flowing booze to get people talking and a night of partying that, for some, only ended with the dawn of a new day, to bond a group of people.

On to the third day. Morning becomes afternoon and people are still recovering: ordering snacks by the pool and relaxing on the lounge chairs only steps from the beach. Attendees are hurting and a new schedule is implemented (hallelujah for the entrepreneurial spirit, which embraces and applies flexibility and adaptability). The presentation by Scott Harrison of Charity: Water is delayed by half an hour.

Charity: Water Presentation
Slowly, people start trickling in and soon everyone is accounted for and Scott starts talking. He tells of how his mother was an invalid since he was four, he recalls how he left at 18 to claim his life after a childhood of caring for his mom, and openly and honestly with a rawness that's refreshing, he talks about how he became a nightclub promoter and fell into a life of drugs and alcohol--driving a BMW with a girlfriend who was on billboards. He shows us a photo of himself in Paris at 5:30 in the morning with a wasted life but riding on a high, and he says with a slight tinge of disgust, "Here I am at my finest."

But once he hit rock bottom, he was soon flying on a natural high. After two years of volunteering in Liberia where he saw individuals being choked to death by benign tumors and suffering unnecessarily from cleft lips, he decided to get to the source of the problem: the lack of clean water. In 2005, he started Charity: Water and took on the challenge of delivering clean water to villages throughout Africa that were trying to survive off of swamp water teeming with disease--by building wells. Now, three years later, Charity: Water has expanded to 13 countries, raised $7.2 million (100 percent of donations goes directly to building wells) and has impacted the lives of 15 million people. It's hard to impress a group of people such as this but he accomplishes it, and we are all left with a lot of food for thought.

R&R
After the presentation, the group splits up. Some are going cave swimming, others choose scuba diving, and the rest decide to chill by the pool. I stay at the resort to collect research for my upcoming article for the March issue on "Billionaire entrepreneurs and what you can learn from them." Poolside conversation covers everything from the top three regarded books to personal vices.

Cancun Nightlife
Next up is another night on the town--this time north to Cancun. Dinner at a steak house and partying at a couple of clubs. Here are some of the night's highlights:

- Non-stop entertainment with everything from a trapeze act to a French cabaret to a Phantom of the Opera snippet.

- Hidden talents come to life when balloons falling from the ceiling are transformed into a hat and various abstract designs.

- One of the guys looks like he might get lucky with a group of New Zealand women, but when he lets them go to buy their own drinks, they never return.

- Lin Miao, founder of Tattoo Media, a behavioral ad network, checking his BlackBerry at the club; Steve Burman who represents Jones Lang LaSalle, one of the sponsors, e-mailing Lin from the club with one line: Stop checking your e-mail.Even when clubbing, the BlackBerries are consulted.

- A club so densely packed with people that surely the legal occupancy has been maxed. Fighting for the exit, barely making it out alive.

- Parked mopeds just outside of the clubs selling fresh, hot Papa John's pizzas. We grab several pies for the shuttle ride back to the resort.

- Shuttle talk includes an expressed desire for more single female attendees at the next Summit.

- Not yet ready to call it a night, the search is on for the location of the after-after party.

- My night ends at 3:30 a.m.I crash into bed too exhausted to care where that after-after party might be.