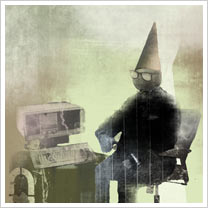 As we bid a heartfelt aloha to 2008 and an anticipatory aloha to 2009, we hope, as always, that next year is better than the last. My biggest hope is our capitalistic society is one year older and wiser. That we take and learn from the ruler to the knuckles 2008 delivered. That our forlorn 401(k) plans and our shell-shocked stock portfolios don't let us forget what happened and the pain involved in fixing things.

Dennis Romero reminded us of the top business headlines of 2008, and Justin Petruccelli gave us a look back at the year's biggest flameouts and bailouts. Today, let's look at the lessons to be learned from 2008's economic meltdown and the nearly $1 trillion bailout package.

Putting together a $700 billion bailout package in 32 seconds is a bad idea. OK, so it took more than 32 seconds, but it was too fast for almost $1 trillion in taxpayer cash. Hardly any oversight. Too few restrictions. And too much "encouraging." Is this pee wee soccer? It's our money; tell the banks to start loaning it already. If they're not going to loan it, maybe they could be troubled to tell us what the hell they are doing with our money. Or, maybe not. JPMorgan Chase received $25 billion in federal dollars, and here's what spokesman Thomas Kelly told the Associated Press: "We've lent some of it. We've not lent some of it. We're not disclosing that to the public. We're declining to." Really? Perhaps we should turn Mr. Kelly and the JPMorgan folks over to a collection agency. See how much they like getting calls during dinner.

Maybe measured regulation isn't so bad. This one is likely to create some dissent. Some will say there's too much regulation already, with Sarbanes-Oxley costing companies millions of dollars. Others will lobby for heavier regulation, to the point of strangulation. As with most anything, the solution likely lies in the middle. Our food is regulated. Our prescription drugs are regulated. Our cars are regulated. Why should the most complex financial instruments in the world be any less regulated than our milk, bread and Viagra?

If it looks too good to be true, it is. Earning consistent double-digit returns from a hedge fund is like playing with house money. Reinvest that 10 percent or 12 percent gain, and watch next year's returns grow even faster. For many years, Bernard Madoff had investors in his hedge fund believing he was King Midas, turning everything he touched into gold. Trouble is, his hedge fund was more Ponzi than profitable. After his arrest, he told investigators that he was paying investors with money that wasn't there. Granted, Madoff kept his financial statements under lock and key, according to a Reuters report, so investors were left in the dark. Regulators didn't do much to help investors in this case, however, after one certified fraud examiner alerted authorities to 13 potential red flags as early as 1999. Harry Markopolos enlisted mathematicians to crunch the numbers and concluded fairly quickly that the stated returns were impossible to achieve via the methods Madoff claimed to use. His warnings went unheeded amid the din of investors screaming "cha-ching."

If you can't afford it, don't buy it. Credit flowed freely throughout the 1990s and the early part of this decade, but most of it was issued based on the belief that house values would continue to rise like a child's soap bubble on a soft breeze. Well, when pretty soap bubbles burst, they sting the child's eye and elicit a few tears. When a housing bubble bursts, it sucker punches the economy and gives it a black eye. No longer able to dip into the home-equity till, consumers came to the realization that they couldn't afford most of the things they bought. Now, stuck with a houseful of stuff that seemed like a good idea at the time, many consumers are unable to purchase the stuff they actually need.

Don't grow for the sake of growth. Starbucks found out the hard way that growth needs to be part of a plan that includes keeping an eye on customer experience. The company that became (in)famous for putting coffee shops on two corners of the same intersection finally hit the wall in the U.S., closing more than 100 stores and scaling back its plans to open others. The company brought back Howard Schultz as its CEO early in 2008. Schultz still has growth plans, but they are part of a measured plan to expand the Starbucks brand in the international market--where there is still room to grow. We've yet to see if the new strategy can offset the damage to Starbucks' stock price--trading at $9.22 today, off from a 52-week high of more than $21--but it seems the company has realized that growth itself is not a strategy.

Perception is reality. Maybe the AIG high-performer retreats were scheduled prior to the bailout package money being delivered. Maybe the Big 3 automaker CEOs couldn't find seats on commercial flights on short notice, forcing each of them to take a private jet to Washington to beg for money before Congress. Maybe the bailout money really is in the form of loans to the financial sector (but those loans are backing loans backed by homes now worth less than the value of the loan that's backed by the other loan). Maybe all those things--and more--are true. But public sentiment toward the financial, automobile and banking industries is low: Think burglars robbing a Toys for Tots on Dec. 22. Even as gas prices tumble from their historic highs over the summer, Gallup says 79 percent of Americans can't shake the feeling the economy is getting worse.

There is no such thing as "too big to fail." Proponents of the bailout packages were fond of saying we had to save these huge companies because they were too big to fail. That, as we have seen, is false. Many of these behemoths have failed spectacularly; many others are alive by the grace of government largesse with our tax dollars. They may be too big to let fail, but they are not too big to fail.

OK, that last one may be more a semantic lesson than an economic one.

As you toast the changing of the calendar, keep these lessons in mind. Maybe a year from now we can decide whether society made the dean's list or ended up in the principal's office.