Ultra-portable notebook MSI X-340 aims to blow away the Air.

By Dan O'Shea
August 19, 2009
This story appears in the September 2009 issue of Entrepreneur. Subscribe » 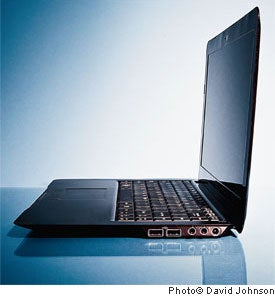 Mere portability isn't enough for most entrepreneurs. We want to carry everything but feel as if we're carrying nothing--and look cutting-edge while we're at it.

That's why ultra-portable laptops are all the rage. They're as light and thin as a notebook (the kind people used to write in), and as sleek and shiny as a large sushi knife. For a while, there have been only two real objects of ultra-lust: Dell's Adamo and--the gizmo that really got everyone salivating--Apple's $1,500 MacBook Air.

Now, MSI Computer has given us one more--and at a much lower price. The MSI X340 notebook PC weighs in at just under the MacBook Air's 3 pounds and is barely more than three-quarters of an inch thick. It has a 13.4-inch screen with HD 1366x768 resolution LCD and HDMI video input. It comes loaded with Bluetooth and Wi-Fi, and you can add mobile broadband if you like.

The X340 is also the first laptop to use Intel's Ultra-Low Voltage CPU, cutting its power draw to as low as one-sixth of a similar PC's. This power feature really has tongues wagging, but we're more excited about the reduced draw on our wallet: At around $800, it's much lighter than . well, you know.

Establishing a Clinical Advisory Board Is One of the Best Decisions I've Ever Made for My Business. Here's Why.