More Than Just a Pretty Faceplate

By Scott Steinberg
October 2, 2009
Opinions expressed by Entrepreneur contributors are their own. 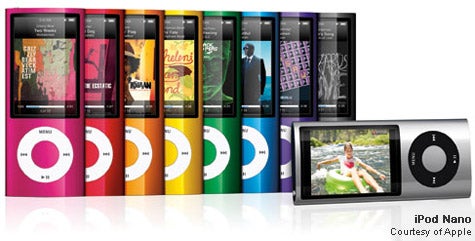 Thus far, Apple's pint-sized iPod Nano digital music player has made a lot of noise for its fashionable styling and ability to comfortably store and play all your favorite songs. But thanks to the new fifth-generation edition's inclusion of clever features like a built-in video camera, microphone and speaker, in addition to a bigger screen, this gizmo's not just a mobile entertainment powerhouse--it's also a portable productivity center for enterprising small-business owners, who can use the device to record promotional material, take dictation or catch-up on breaking news while cruising at 30,000 feet.

Available in several eye-searing colors from lime green to hot pink, and capable of holding 8GB ($149) or 16GB ($179) of tunes, photos and films, let's not kid ourselves, though--this is clearly a device designed for entertainment first. Certainly, after a long day at the office, there's nothing quite as satisfying as cranking up the volume on a favorite sing-along ditty via the all-new integrated FM tuner or virtually queuing up your favorite song. In a helpful turn, radio listeners can even pause and rewind live broadcasts or tag songs they like but can't identify, allowing them to discover new artists' tracks. A host of music formats including MP3 and AAC are also supported, with music purchasing, downloads and transfers to the device intuitively handled via popular song management software program iTunes. Even more surprising for such a pocket-friendly device, a vibrant 2.2-inch color screen--larger than the display found on previous models--readily accommodates all your treasured TV shows, music videos and movies. Intriguingly, a pedometer function has also been built into the unit, which tracks steps taken and calories burned, hopefully encouraging road warriors to actually sneak in that morning workout before a day of back-to-back meetings.

But look beyond obvious applications, and you may be surprised at just how handy a business tool the device can be. For example: While incapable of shooting high-definition video or still photos, the 640x480 standard-definition clips its new camcorder function produces are perfectly suitable for and easily uploaded to YouTube and other online film aggregators. As such, it's simple to create quick-and-dirty running video diaries or interviews with colleagues and clients, behind-the-scenes views of your new startup, or other promotional material perfect for generating internet publicity. Keep in mind that you won't find another pocket digital video camera with as many cool extras either. Nor, for that matter, one with the ability to store anywhere near as much footage on its internal memory, meaning that attending a single conference and interviewing a few keynote speakers could provide months' worth of promotional content for your website. Use it cleverly and often to share information and ideas, and you'll have the foundation to build a dedicated following via Facebook or Twitter in no time flat.

Similarly, if you're looking to catch a few instructional films, complimentary webinars or video podcasts from other users, the iPod Nano can also serve as a source of learning and inspiration. The same benefits also apply to digital audio files as well, as literally thousands of downloadable recordings can teach you how to better manage employees, improve your sales pitch or secure small-business financing. The range of possible choices doesn't just include best-selling audiobooks either. You'll find 10 times as many free business-related podcasts out there, many created by fellow entrepreneurs, quite a few of which include real nuggets of wisdom interspersed between the obligatory sales pitches. Now that there's a built-in microphone included in the gadget, why stop at taking dictation or recording the odd seminar? You can even produce a few podcasts of your own to help build your brand, although an add-on microphone is highly recommended for power users, or those frequently working in noisier environments like convention halls.

Mind you, you shouldn't ditch all your dedicated, single-function accessories such as a Flip Mino camcorder just yet. Low-light video recording performance is considerably poor, the Nano's screen proves hard on the eyes during extended viewing sessions, and it can be tricky to capture audiovisual content at anything resembling professional quality. Nonetheless, in terms of everyday purposes such as keeping your website's community forum or YouTube channel stocked with content, or yourself abreast of the latest happenings and best practices in the business world, realize. For the size and price, you won't find a smaller or more robust portable media player around, let alone one as likely to impress the interns, or prove an essential traveling companion on your next cross-country trip.