Colleen DeBaise
November 29, 2012 min read
Opinions expressed by Entrepreneur contributors are their own.

Editor's Note: We're rolling out 10 Days of Indie Merchant Gifts, in our annual celebration of the artists, craftspeople, designers and other independent merchants who make one-of-a-kind products. See gifts in the categories of pets, jewelry and kids.

Now here's something entrepreneurs do quite well: They come up with the darndest things we'd certainly never think of.

This year, when we asked for submissions in the "quirky/unusual" category for this year's Indie Merchant Holiday Gift Guide, we got products made from bullets, airplane parts, crystal balls -- you name it. Where do people come up with this stuff?

Actually, you told us. We've included the stories behind these intriguing products in our slideshow of our top picks. All items cost less than $50, and are sure to lead to some interesting conversations if found in one's stocking. 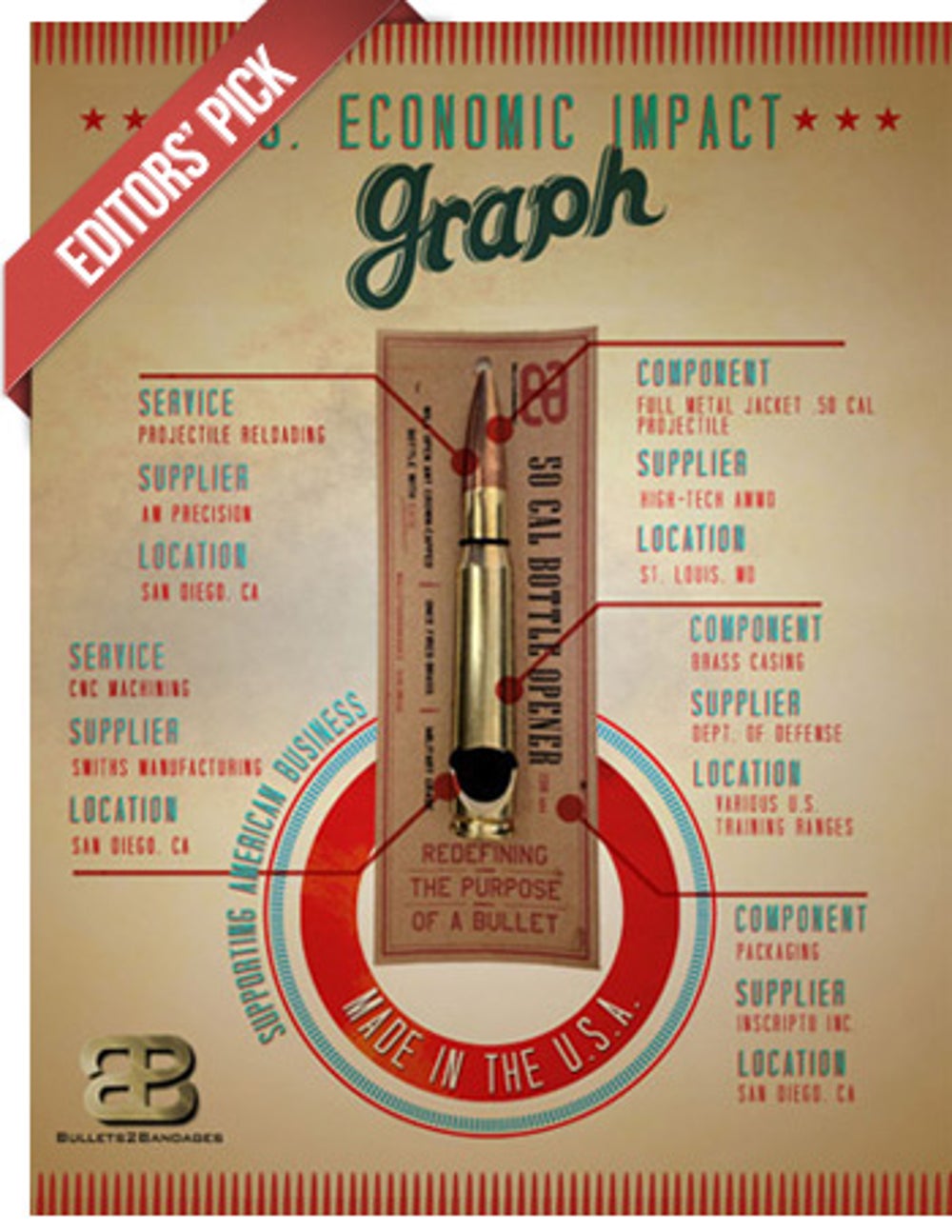 Erik Spalding of San Diego and his business partner, Cole Evans, spent the better part of their 20s as Naval explosive ordinance disposal officers, doing their part to rid the world of unexploded bombs and other devices. When their commitment to the U.S. Navy ended in 2010, "the challenge that entrepreneurship offered was very alluring," Spalding says. They began making necklaces, belts, pens and other items out of bullets -- eventually creating this .50 Caliber Bullet Bottle Opener. It's now their most popular seller, and a portion of proceeds supports veterans' organizations.

Editors' comment: This is just plain super-cool and would make a great stocking stuffer for hard-to-buy guys. We also like that it's made in the U.S. and the company supports veterans' charities. Like we say, super-cool.

From The Head of Ed 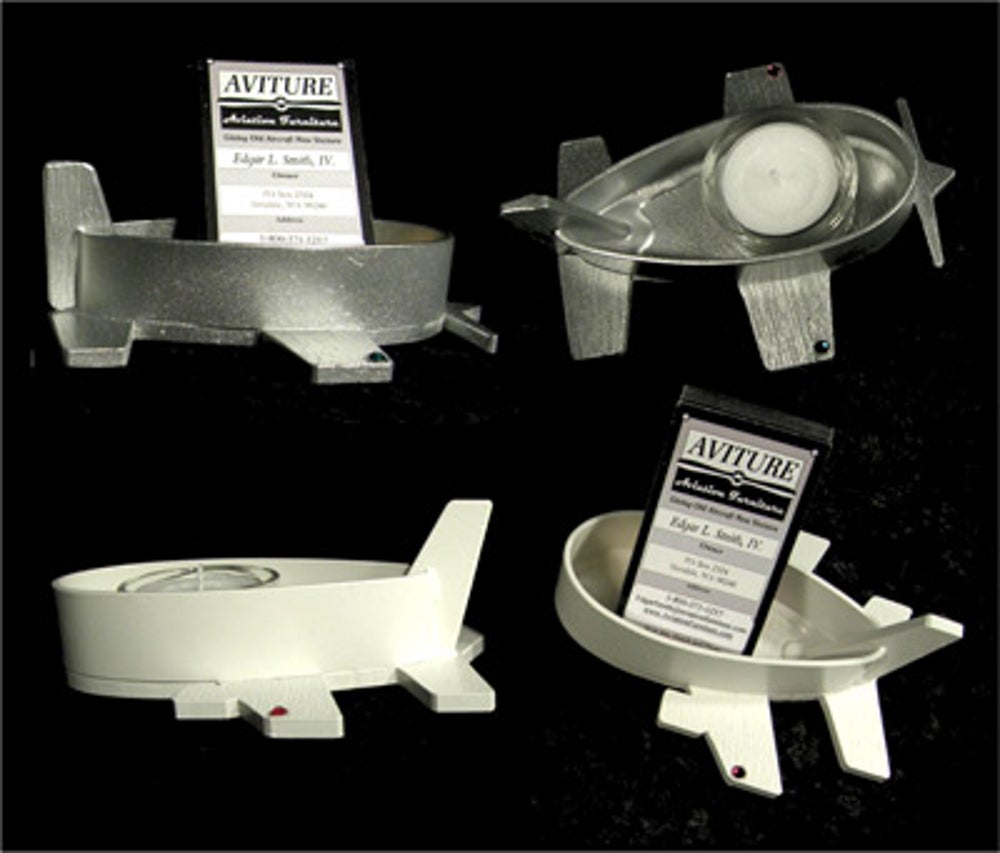 "I have spent my life infatuated by airplanes," says Edgar L. Smith IV of Ferndale, Wash. After a career in aviation, working in helicopter mechanics to airport security, Smith decided to "mash up" his passion for airplanes with his artistic talents to make functional art from salvaged General Aviation airplane parts. This business-card holder, which can also serve as a tea-light candle, is made from the wing brace of a G.A. high-wing aircraft.

Editors' comment: We know several guys who would dig this. We also like that each piece comes with a serial number and a description of the aircraft parts used. 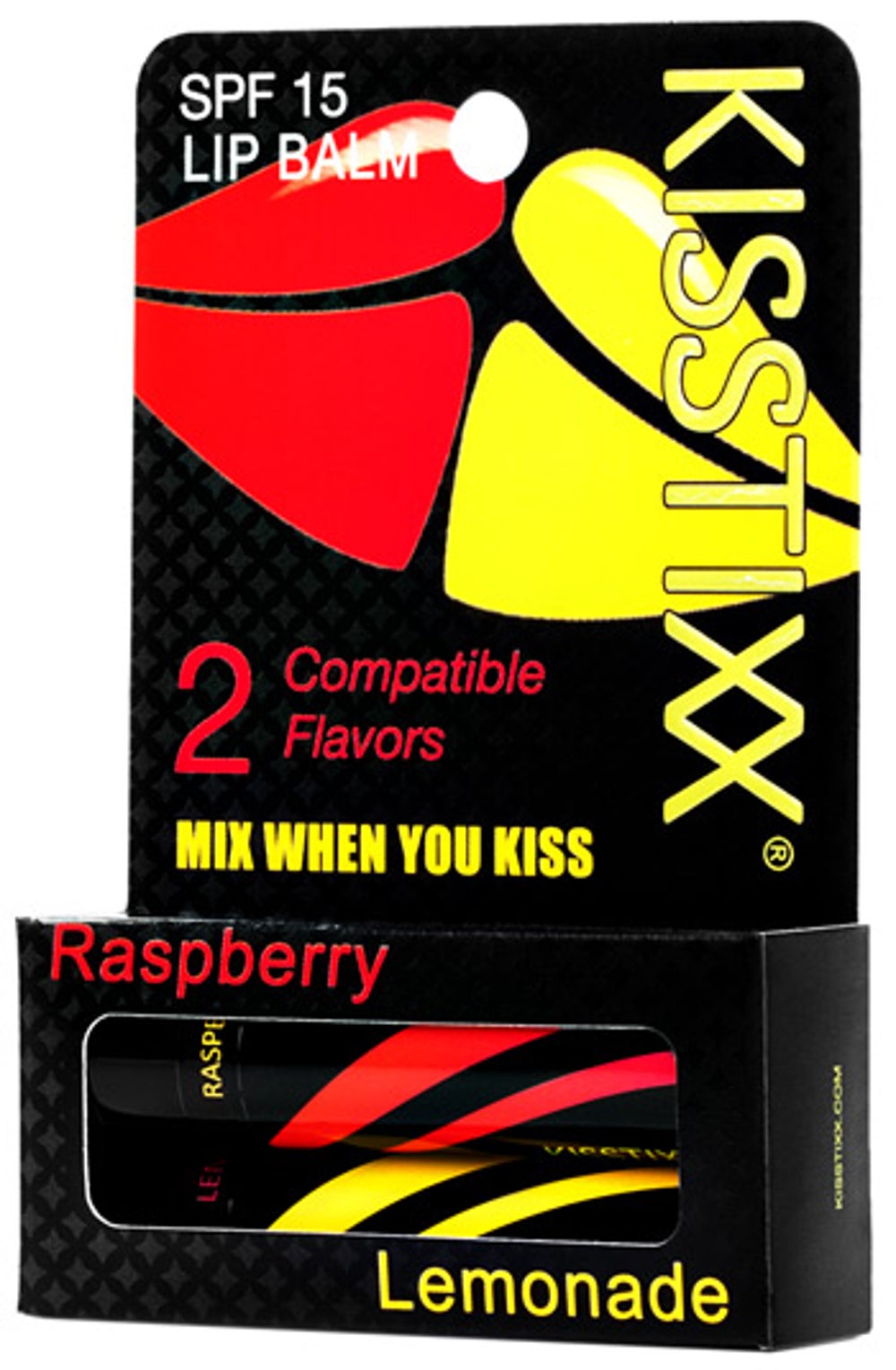 Dallas Robinson of Orem, Utah, first came up with the idea for Kisstixx, which are paired sets of lip balm that create a flavor when combined, while he was in high school. Robinson says he suffered from dry and chapped lips after attending sporting events, and that made him "embarrassed" when dating. Eventually, he and university pal Mike Buonomo created Kisstixx. The sassy balm was recently featured on the ABC show Shark Tank, where they received funding from billionaire Mark Cuban.

Leslie Kill of Daytona Beach, Fla., lived for many years in a Victorian house and collected all things Victorian. "I loved the attention to detail," she says. "I often wondered what it would be like if the Victorian culture existed in the future." She's not the only one -- the so-called Steampunk movement rotates around such a time-warp concept. So Kill created this Steampunk crystal-ball watch pendant, which is a working clock inside a 1-inch glass ball, which hangs from a 28-inch bronze chain. The pendant features a modern watch mechanism that can be seen from the back. 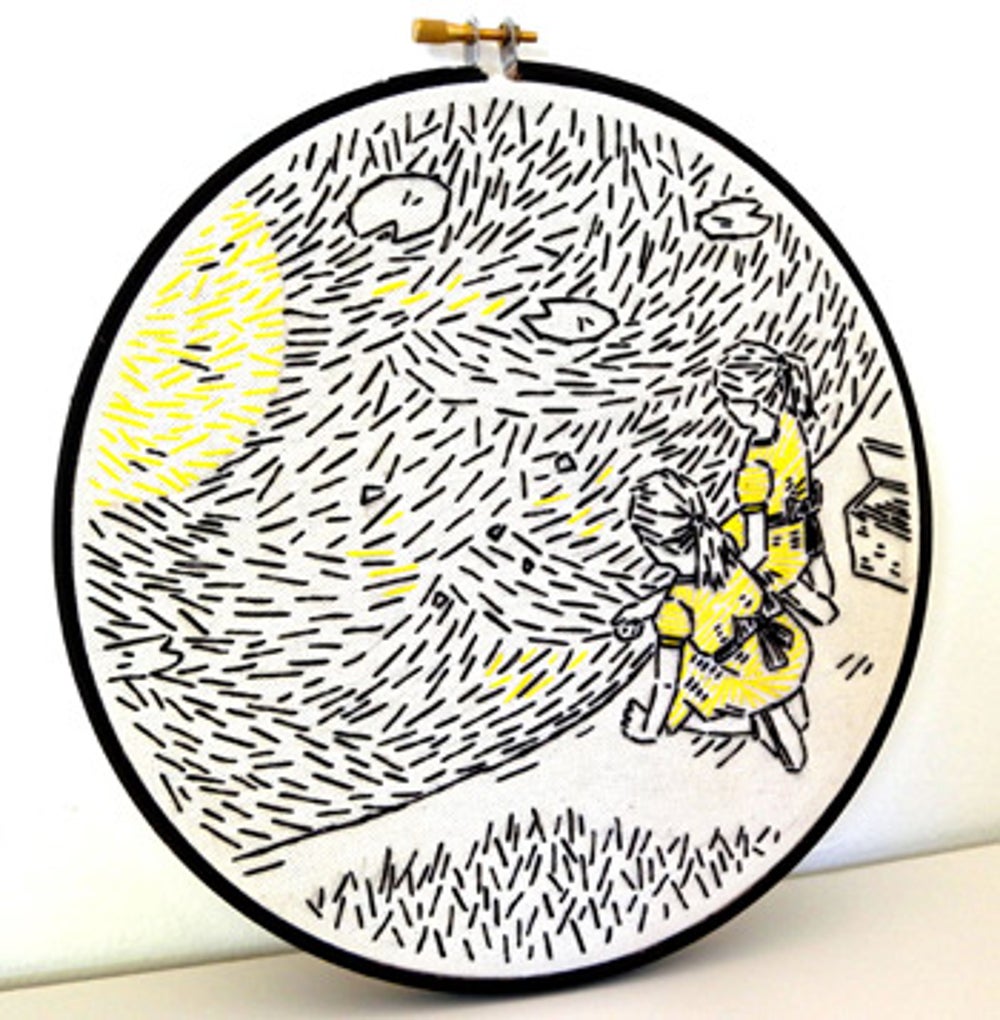 Megan Eckman learned to embroider as a little girl, when her grandmother -- an avid "day of the week" kitchen-towel sewer -- taught her to sew laundry cats and baking dogs. But her work was always messy and she kept pricking herself, so "frustrated and bandaged, I stopped sewing," she says. Last year, out of the blue, she decided to re-learn how to embroider and discovered the same-old "bonneted geese" patterns in the local craft store. "I’m a pen-and-ink illustrator by trade so I converted my favorite illustrations [like antlered girls and love whales] into embroidery patterns," Eckman says. The patterns are easy for beginners, she says, and expert embroiderers enjoy the different imagery. "I never would have imagined all those hours huddled over a tea towel with my grandmother would lead me to sharing smiles with embroiderers all over the world," she says.

Editors' comment: We liked how this kit is a modern take on an old favorite pasttime. Grandma would be proud.

"We’re three things here at Knock Knock: funny, irreverent, and snobby about our pens," says Jen Bilik of Venice, Calif., whose company creates witty-yet-functional products. One such creation is the "Get Crap Done" pen, a 0.06mm black gel-cartridge "writing machine" that is sleeker and more motivational than your standard pen, she says. Why would it make a good gift? "A, it fits neatly into a stocking. B, hello, Secret Santa! And C, who doesn't need to get crap done?" she says. "Unless a recipient blanches at the use of the word 'crap,' we'd hazard a guess that there isn't anybody out there who wouldn't be happy to find this pen under their tree."

Editors' note: We always need to get crap done. Can we ask Santa for one? 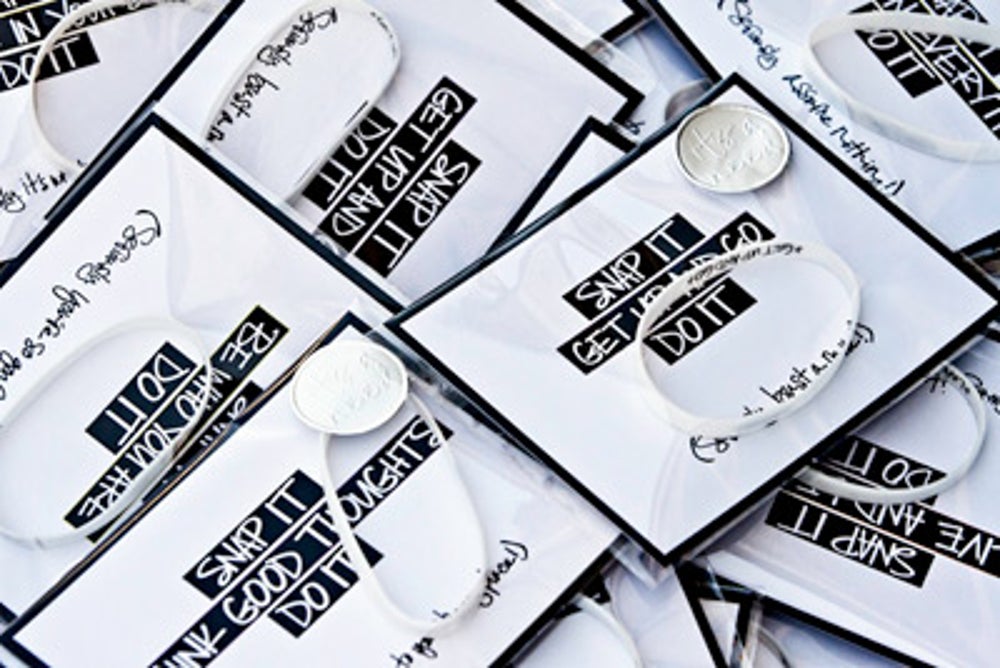 Lindsey Buchanan of Alamo, Calif., says she was always making things as a child, so when she found herself between jobs a few years ago, she decided to design "something inexpensively awesome, something with meaning, intent, and purpose." The next day, using a rubber band and a Post-it note, she created a prototype of her product: A "Snap Out Of It" bracelet designed to inspire people to alter their thoughts, feelings or behaviors. The wearer can snap the bracelet to literally remind themselves to "snap out of it," and bracelets are printed with various messages (such as "think good thoughts" or "get up and go") to remind one what to do.

Editors' comment: This would be a nice stocking stuffer for a variety of ages and either gender, but make sure your recipient won't be offended at the "snap out of it" message. 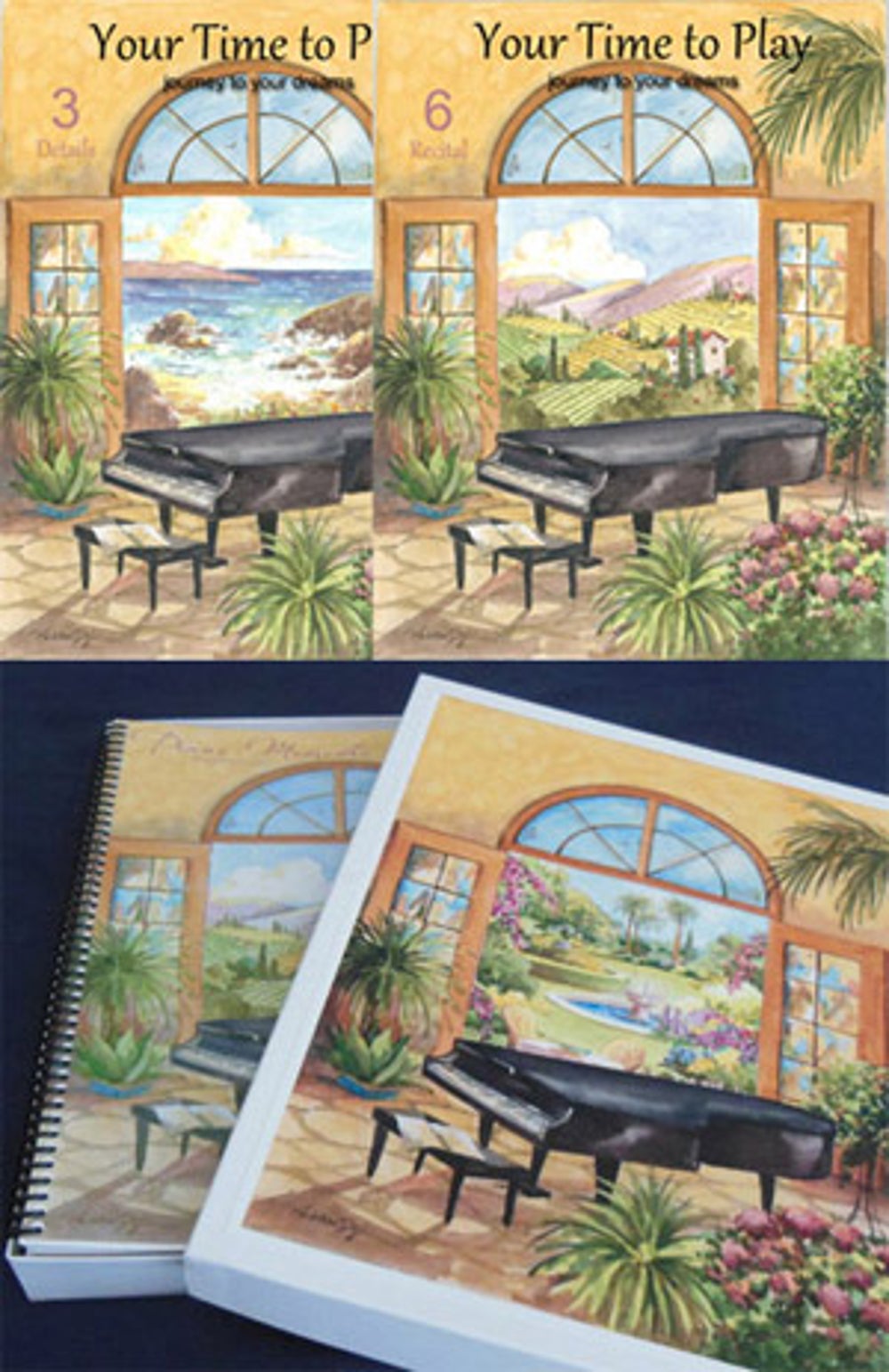 At the age of 12, Joanne Jolee says she took her "fevered young thoughts, formed them into tidy rhymes, added music and created my first song." That's when she says she discovered the healing power of music. Jolee, who studied music theory in New Zealand but now lives in Mesa, Ariz., decided to create her learn-to-play piano kit when she became an American citizen. "The judge said, 'You are now an American and in this free land you can pursue your dreams,' " she says. "What a gift I was given!" The kit includes lessons and stories, and all music is demonstrated on video with accompaniment tracks that can be downloaded from her website.

Editors' comment: The concept is sort of like Rosetta Stone for music. One catch: Your recipient needs to have a piano. 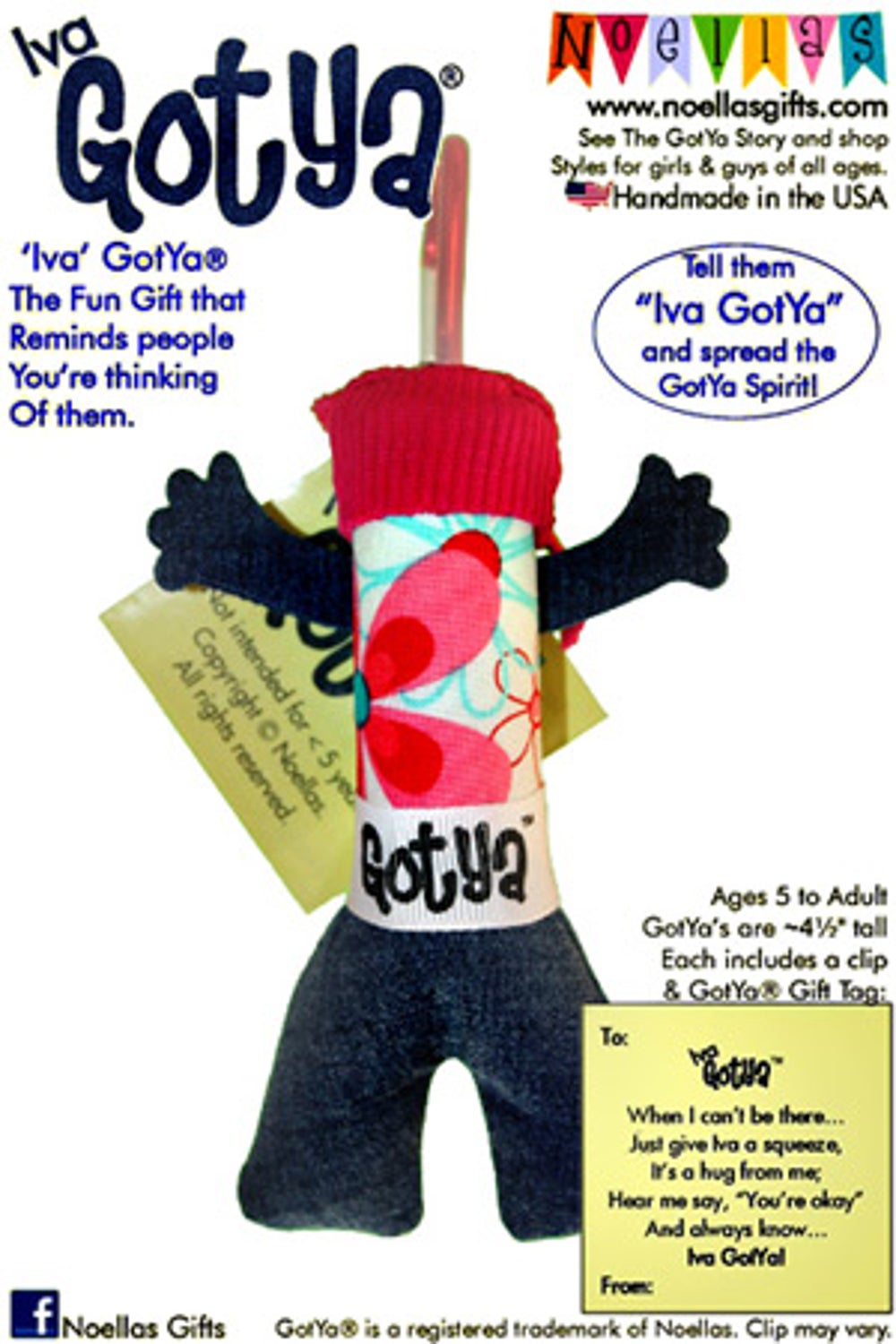 "As a parent, I wanted to give my children something that would remind them of me, and help comfort them when we weren't together," says Julie Hollinger of Ladd, Ill. So she created the "Iva" GotYa, a keepsake that her kids could carry with them or clip onto their bags or clothes. The name comes from when her father collapsed some years earlier from a heart condition. "My Mom held him and told him over and over, 'You'll be okay, I've got ya,' and it helped soothe him," she says. The keepsake is for anyone special, but would also make a nice gift for people serving in the military, staying in the hospital or otherwise dealing with hard times, she says.