Kathleen Davis
February 15, 2013 5 min read
Opinions expressed by Entrepreneur contributors are their own.

A great politician, just like a great business leader, can inspire action and with just a few well-crafted words. We mined the speeches of some of the most significant U.S. leaders from Thomas Jefferson to Barack Obama for words of inspiration.

Whether you need a kick to launch that business you've been dreaming about, or you just need little motivation to keep plugging forward on the slow road of progress, we have your next mantra. 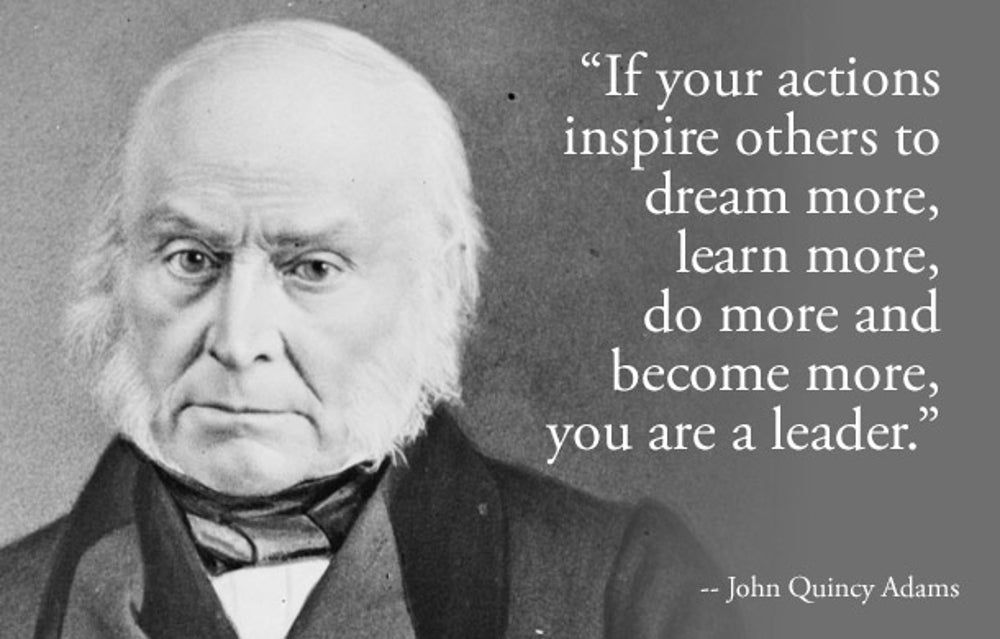 If your actions inspire others to dream more, learn more, do more and become more, you are a leader. -- John Quincy Adams

Despite his struggles with opposition in Congress, the sixth president of the U.S. still knew that a good leader is only as strong as those he works with. Adams managed to pay off much the national debt in his single term in office. Motivating your team to go above and beyond is just as important as being motivated yourself. 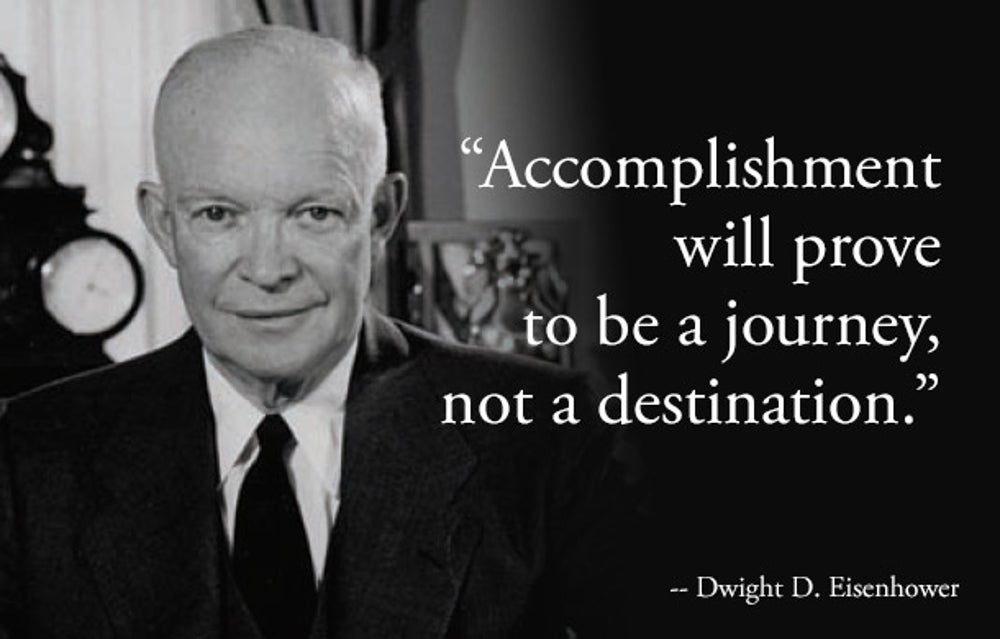 Accomplishment will prove to be a journey, not a destination. -- Dwight D. Eisenhower

The two-term president had a long resumé when taking office in 1952, including serving as a five-star major general in World War II. Leading the county during a turbulent decade in office that included the end of the Korean War, he took a pragmatic approach to achieving his objectives. If big picture success seems too lofty of a goal, focus on what you can achieve each day.

Remember what is important. 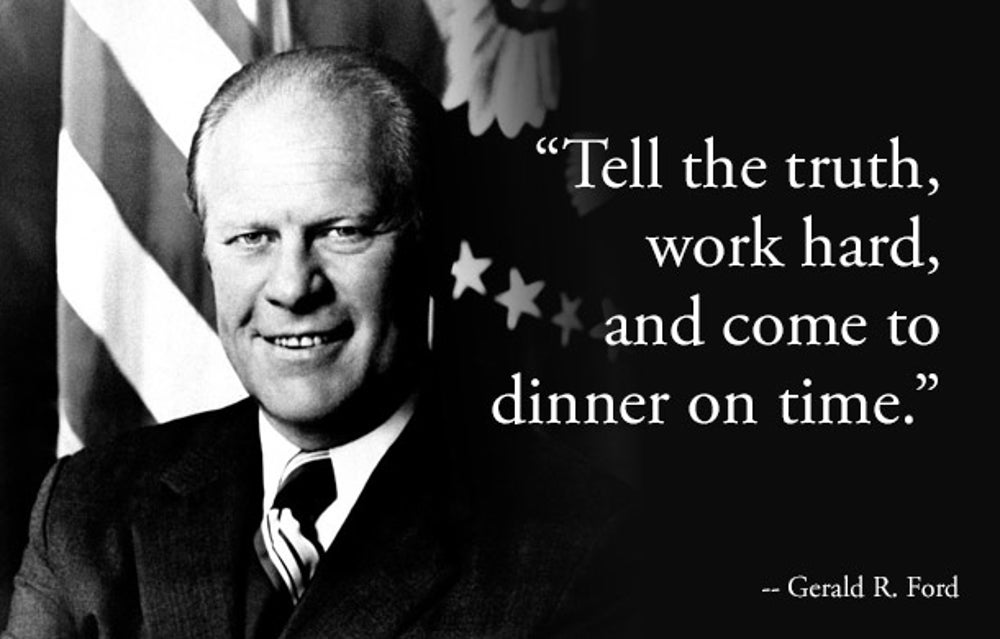 The only president in U.S. history who was never elected to office (he succeed the impeached president Richard Nixon), may not have sought his role as a world leader, but he served his short term with honesty. Ford had a reputation as an open, trustworthy everyman, and his words can serve as a reminder that some of the most important things about leadership are also the simplest. 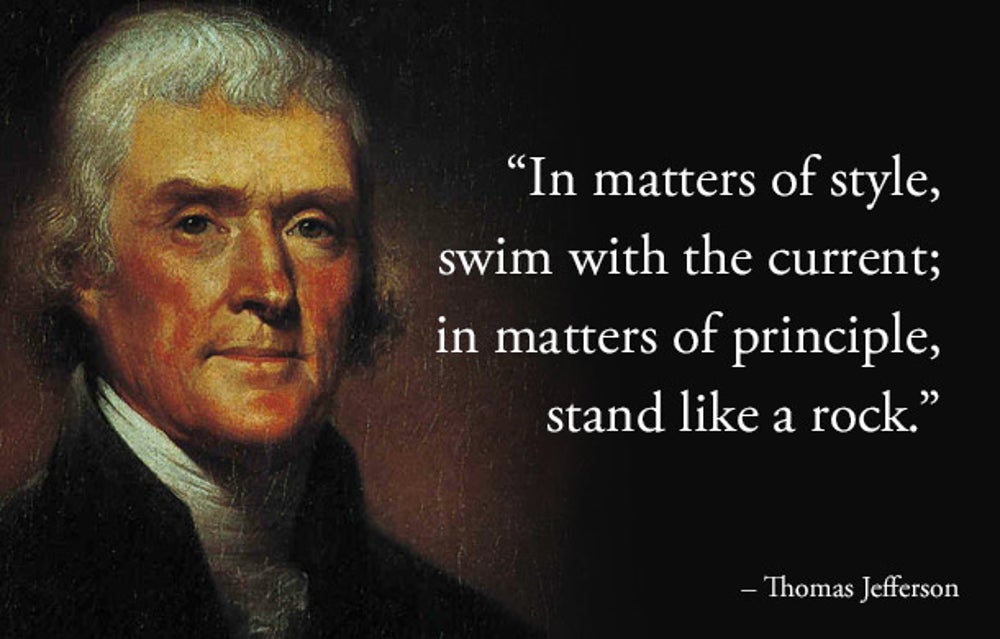 In matters of style, swim with the current; in matters of principle, stand like a rock. -- Thomas Jefferson

The founding father and primary author of the Declaration of Independence knew a thing or two about principles. Among his many notable political achievements, is the bill he wrote in 1786 establishing religious freedom, which was used as a model for the religious language in the Bill of Rights.

When it comes to trends in the market it helps to stay current, but when it comes to what your company really believes in, stand firm and stay true to your principles. 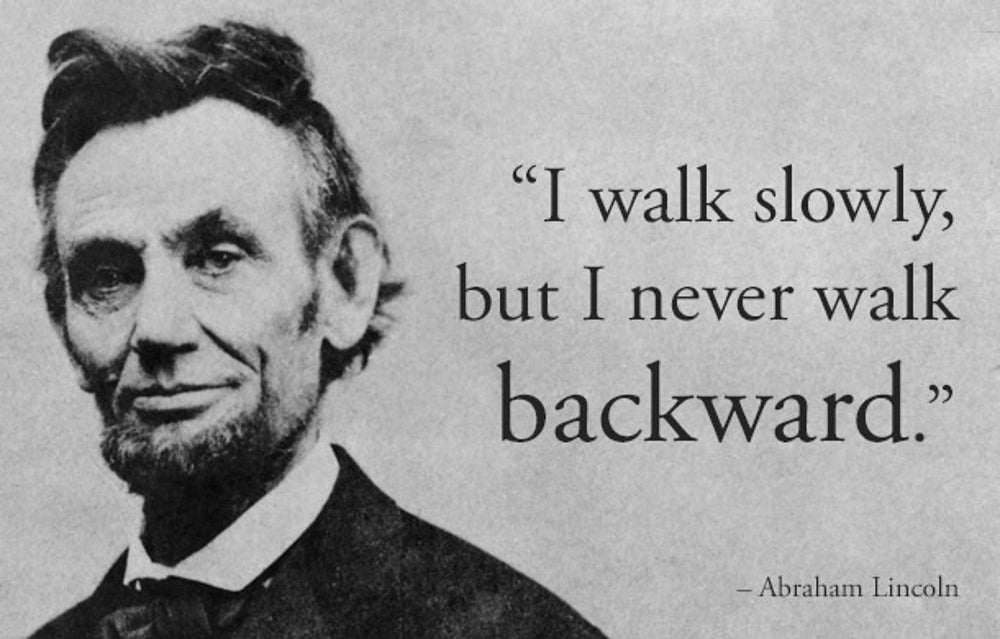 I walk slowly, but I never walk backward. -- Abraham Lincoln

One of the most influential presidents in U.S. history, Lincoln inspired the U.S. during a long and difficult period. His progress in issuing the Emancipation Proclamation and ending the Civil War was arduous and hard-won, but he never gave up. Success likely won't come overnight, so keep your goal in sight and keep moving forward -- no matter how slowly. 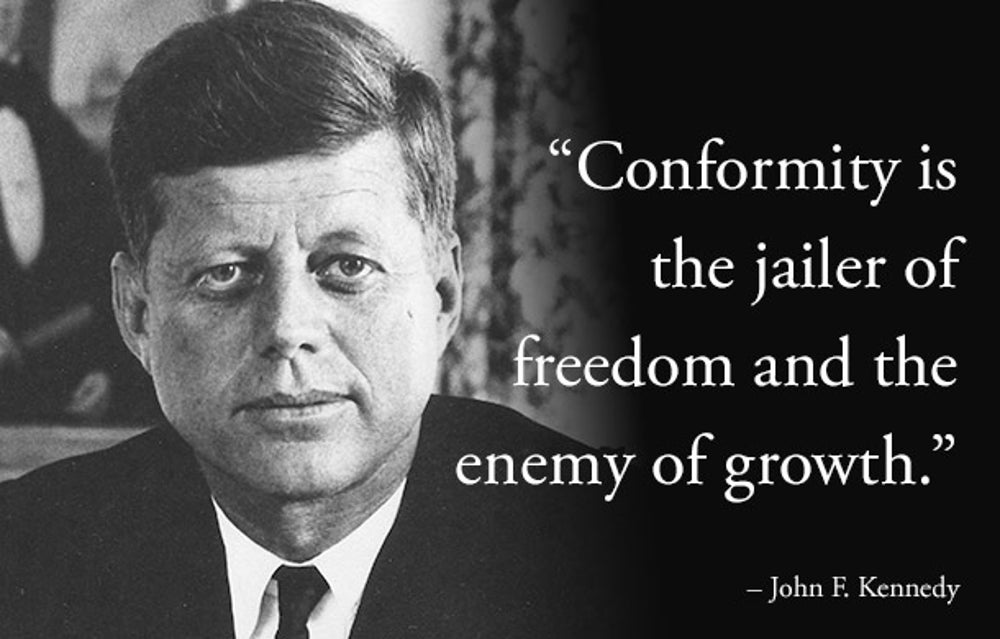 Conformity is the jailer of freedom and the enemy of growth. -- John F. Kennedy

The youngest president in U.S. history was regarded by many as a visionary. Not satisfied with the status quo, Kennedy spearheaded economic programs that launched the U.S. on its longest expansion since World War II and championed equality by calling for civil rights legislation.

Think of the entrepreneurs that you find more influential and innovative, chances are they went against the grain and had a different way of approaching things. Going the safe route is rarely the way to get noticed. 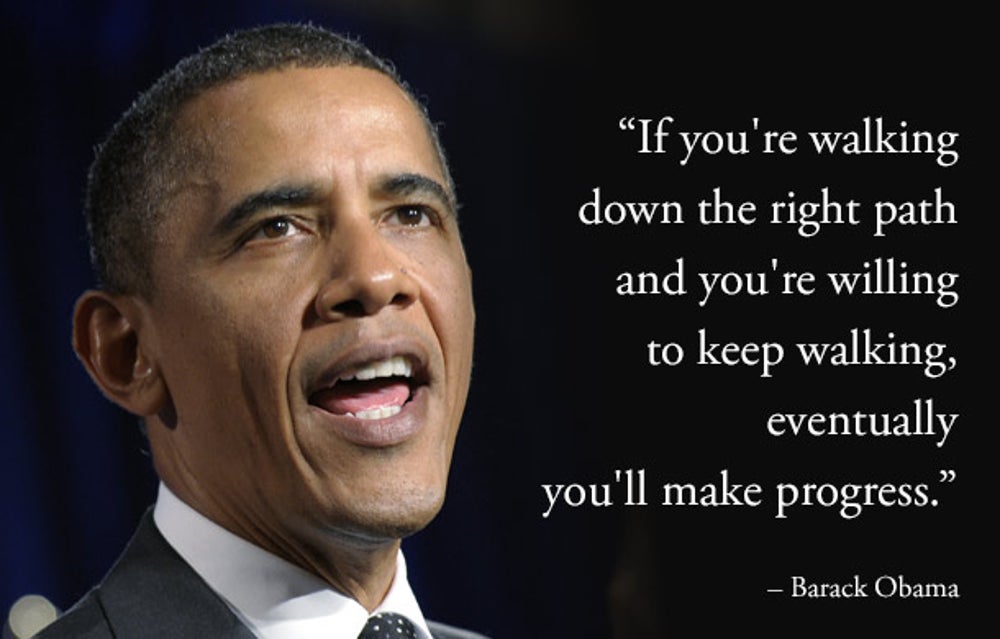 If you're walking down the right path and you're willing to keep walking, eventually you'll make progress. -- Barack Obama

The current POTUS stuck to his guns in his first term in office and passed the landmark Affordable Care Act (aka "Obamacare") despite facing a lot of opposition. Agree with him or not, entrepreneurs can admire his persistence. Once you choose the path for your business, stay committed and you'll make progress slowly but surely.

Treat everyone with respect. 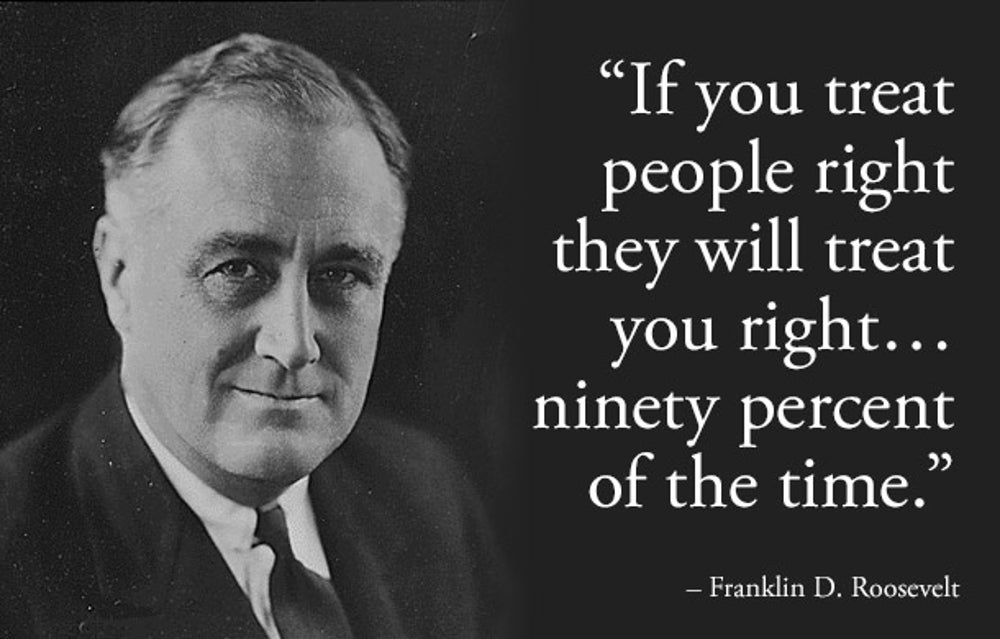 If you treat people right they will treat you right… ninety percent of the time. -- Franklin D. Roosevelt

FDR faced many daunting problems when he took office during the Great Depression. With 13 million unemployed, and almost every bank closed, he proposed his sweeping "New Deal" recovery programs within his first 100 days in office. As the U.S. slowly recovered many turned against aspects of his programs and he responded with a series of new reforms including Social Security and new controls over banks and public utilities. While he won re-election by a large margin, he faced a lot of opposition in the Supreme Court, proving that you can't please all of the people all of the time. 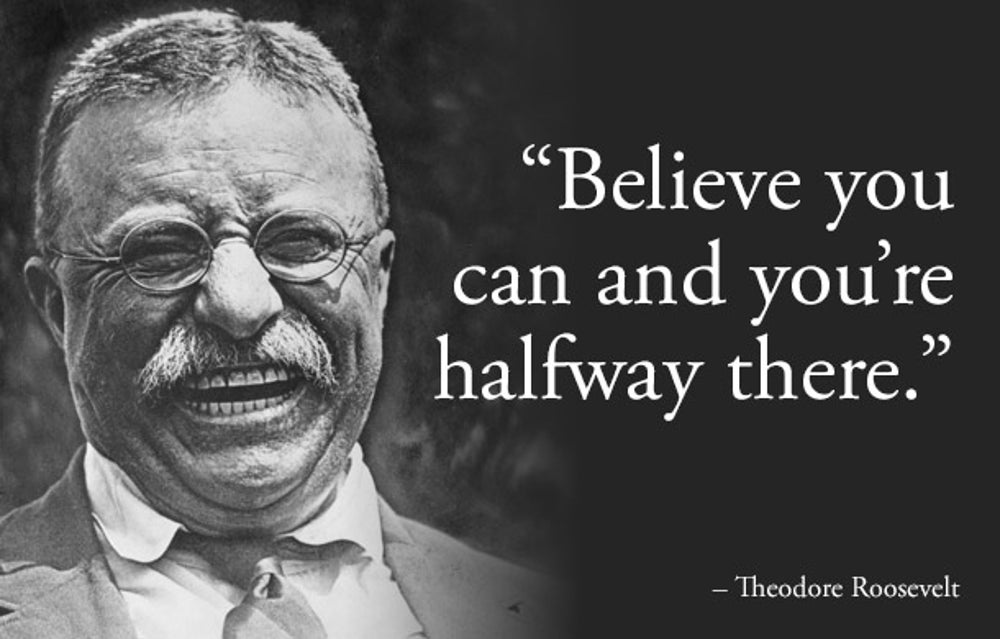 Believe you can and you’re halfway there. -- Theodore Roosevelt

Teddy Roosevelt's favorite proverb, "Speak softly and carry a big stick," speaks as much to his self-assuredness as it does his governing style. The 26th president certainly didn't lack confidence, viewing himself as a "steward of the people." He enacted several large antitrust suits, ensured the construction of the Panama Canal, championed conservation and even won a Nobel Peace Prize. Take a page from his book if you want to inspire confidence in others -- the first step is believing in yourself. 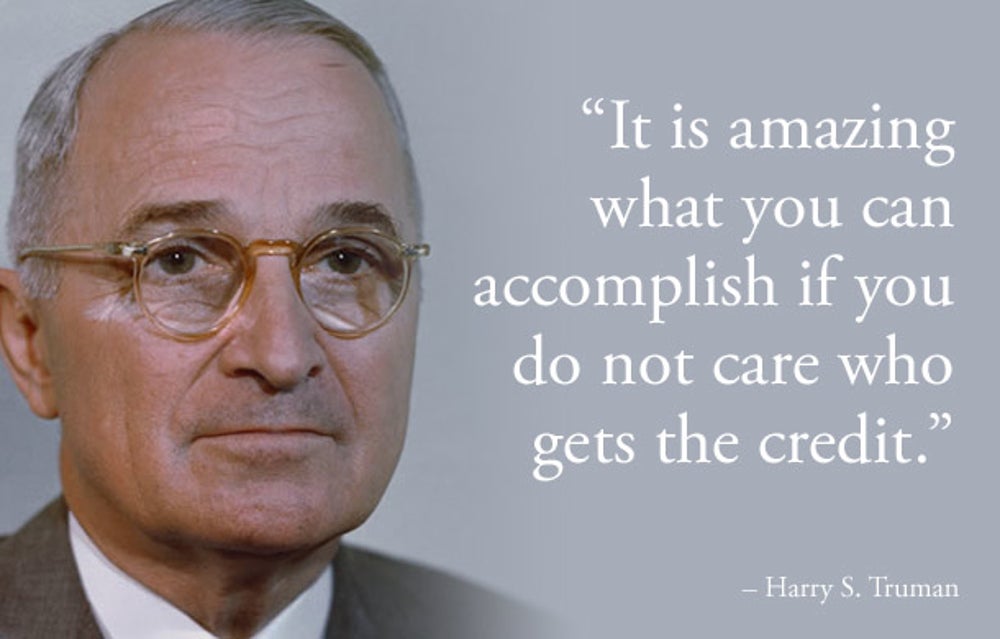 It is amazing what you can accomplish if you do not care who gets the credit. -- Harry S. Truman

Truman faced a myriad of wartime problems including the development of the atomic bomb when he assumed the presidency following Franklin Roosevelt's unexpected death in 1945. Later that year he witnessed the signing of the charter of the United Nations, and worked throughout his presidency with the leaders of other countries. Today's business leaders can learn from his spirit of cooperation.