Sarah Max
March 12, 2013 min read
Opinions expressed by Entrepreneur contributors are their own.

Editor's note: Over the next few months, we'll be taking a virtual tour of U.S. cities to see how the 2008 financial crisis has changed the entrepreneurial landscape, for better or worse

Baton Rouge may be best known as the home of Louisiana State University and state government, but more entrepreneurs are starting to settle here, too, thanks in part to a wealth of resources at LSU and generous state tax credits for digital media and software firms.  (Please see "Baton Rouge Turns Up the Heat With New Startups.")

Many of the city's startups have ties to the city's longstanding medical, petrochemical and political institutions. Still others were born out of life-changing moments or deep-rooted passions. Here's a look at some of the new ventures coming out of Louisiana's capital city. 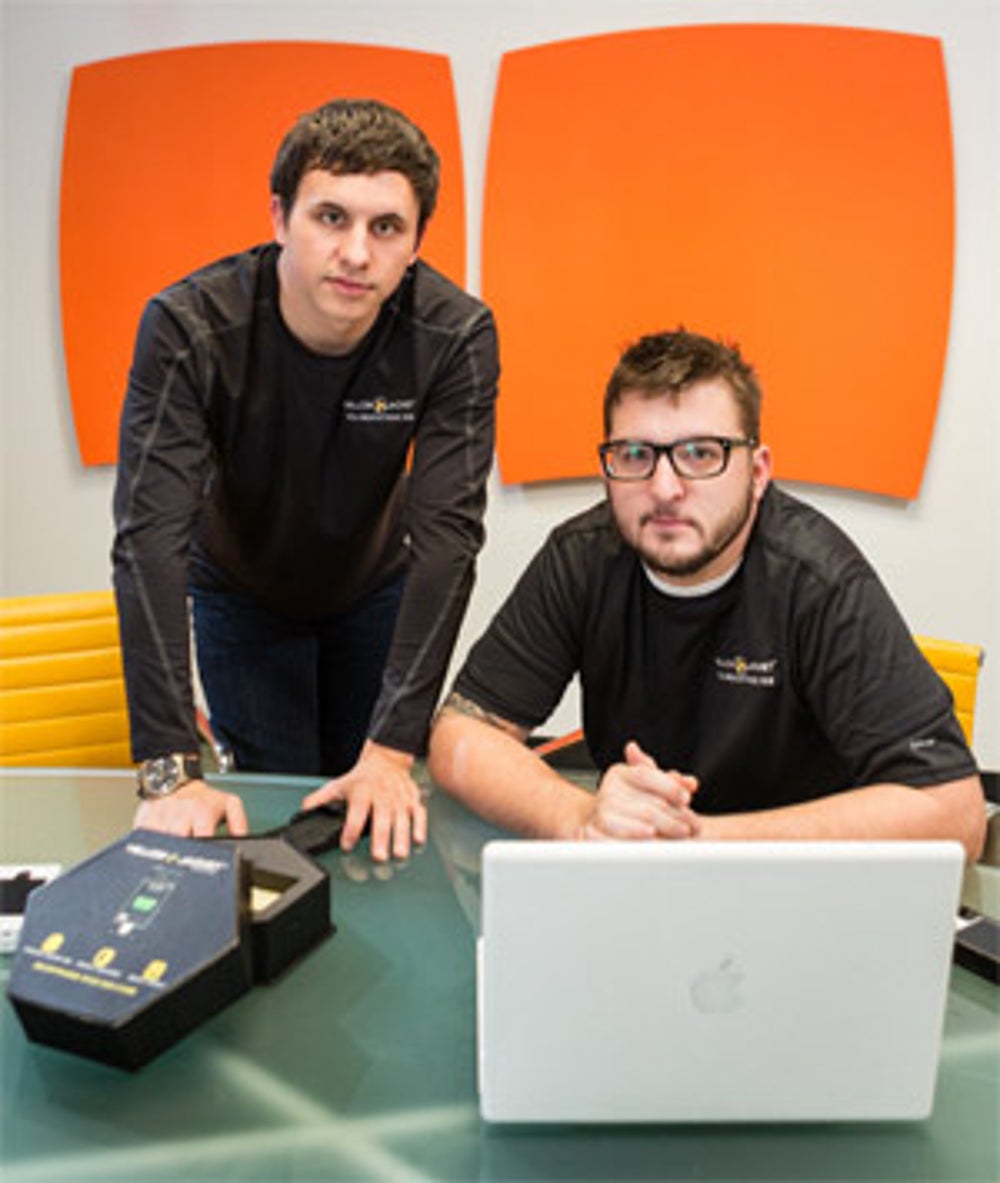 Seth Froom dreamed up his Yellow Jacket invention after he was robbed at gunpoint in his own house and forced to hand over his iPhone to his attacker. He realized that if the phone itself had been a stun gun, it would have been a game changer.

He took his idea to his friend Sean Simone, and together they launched Yellow Jacket, a smartphone case that doubles as a 650-volt stun gun. The company got its first zap of funding when it won a $5,500 prize at the LSU Student Incubator Business Plan Competition in April 2012. That was followed with $100,000 raised via crowdfunding platform Indiegogo and a subsequent angel investment round. The iPhone 4 cases will be available for sale on the company's site beginning in April; the company plans to roll out cases for iPhone 5 this summer and Samsung Galaxy this fall.

"We have forever changed how people view personal mobile devices," says Simone, Yellow Jacket's CEO. "No longer are they just for communication, games, business or basic utilities. Now, these devices can literally save your life." 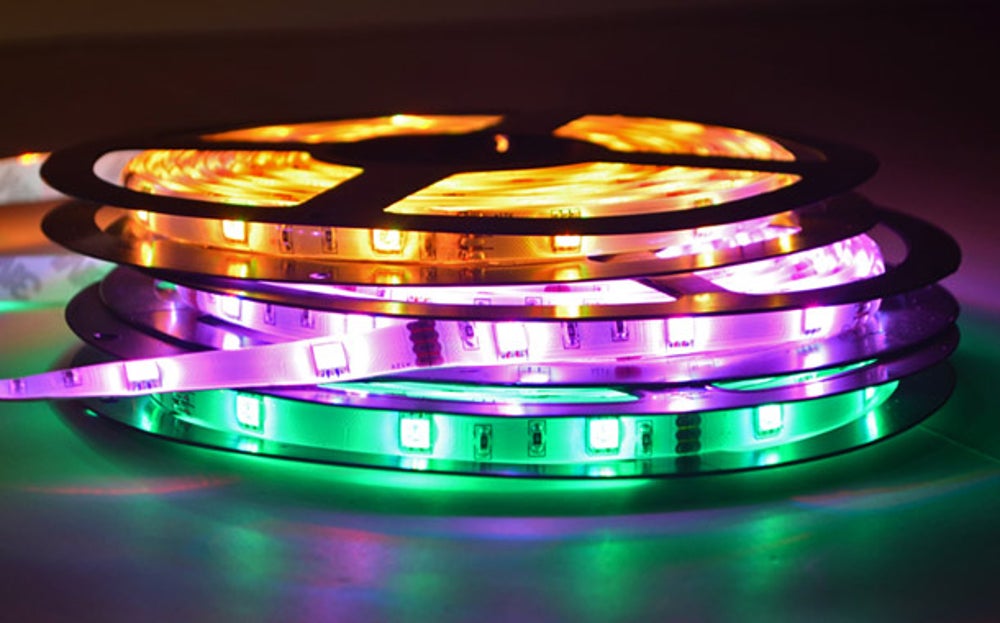 When friends with backgrounds in environmental science and business got together, the result was a smart venture that's good for the earth. Bin Yu, with a degree in environmental science, and Leo Zhao, with an MBA, both from Louisiana State University, founded HitLights, an LED manufacturing startup that brought together the profitability and sustainability of energy-saving LEDs. Bin and Zhao believed they could offer consumers LEDs at a lower price without sacrificing quality.

With demand strong, they invested in their own manufacturing in China in 2012 but continued to use U.S.-made components when possible. Some 50 U.S. distributors now carry HitLights products, such as strip lights, light bulbs and automotive lights. "We've doubled employees in the past six months to meet higher demand," Zhao says. 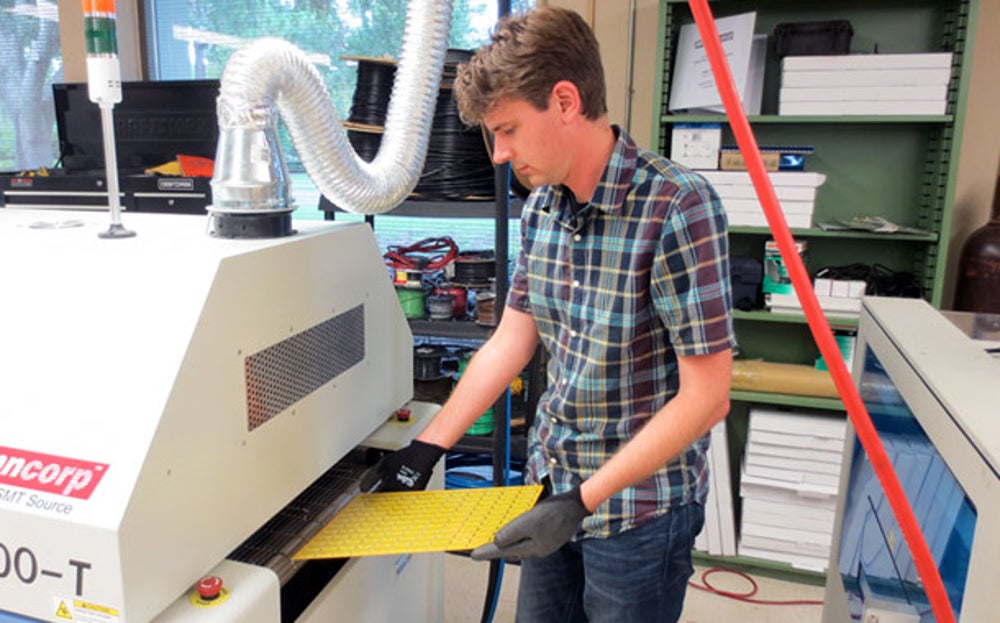 In 2006, two shipping industry colleagues, Paul Morton and John Crane, visited Southeastern Louisiana University to pose the challenge of developing a sensor system to measure the draft – the distance from the water line to the bottom of a ship's hull – during the ship loading process. The standard tool at the time was a gauging tape, which is about has high tech as a tape measure.

Dr. Mike Asoodeh, a material scientist, and his protégé Matthew Magnuson, a systems designer, were up for the challenge. SJTechs was born with its chief product being Crane Data System, a sensor platform that is installed on harbor cranes that have a programmable computer. Magnuson describes it as the "OnStar" system for mobile harbor cranes. In November 2012, the company struck an agreement to supply one of the largest manufacturers of port cranes with its sensing technology. 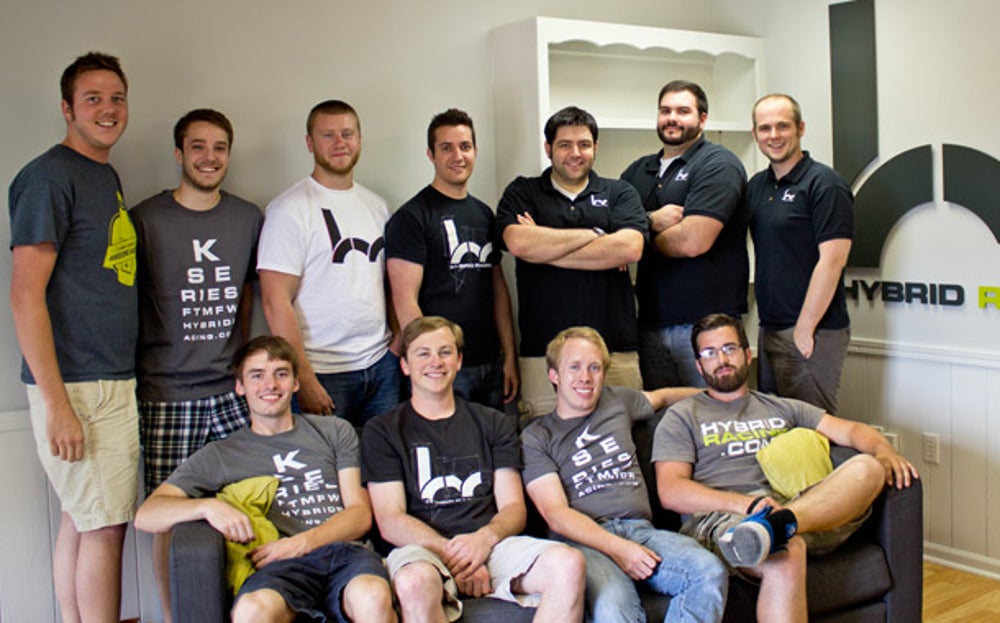 Big ideas often start in a garage. William Davidson and his friends were tinkering on cars and enrolling sporadically in college classes when they saw an opportunity.

The young mechanics were obsessed with modifying their Hondas to make them go faster and find better quality parts in the process. They had gained experience dropping Honda's B series engines into lighter bodies before Honda introduced a new K series engine. Davidson and friends decided to retrofit the new engine into an older, lighter Honda chassis. Unable to find needed parts for such retrofits, they launched Hybrid Racing and started making their own.

The entrepreneurs initially financed the company with money they had saved from transforming other cars, and in 2003, moved into a small shop. Soon, they were both sourcing parts from Japan and manufacturing their own for engine swaps.

Now located in a 4,000-square-foot space in a Baton Rouge industrial park, Hybrid Racing is working to bring all manufacturing in house to control costs, inventory and quality. "This will be a huge step in our growth and we are very excited," Davidson says. "We are also working on a custom application to simplify product data management so that we can begin to offer more brands to our customers online." 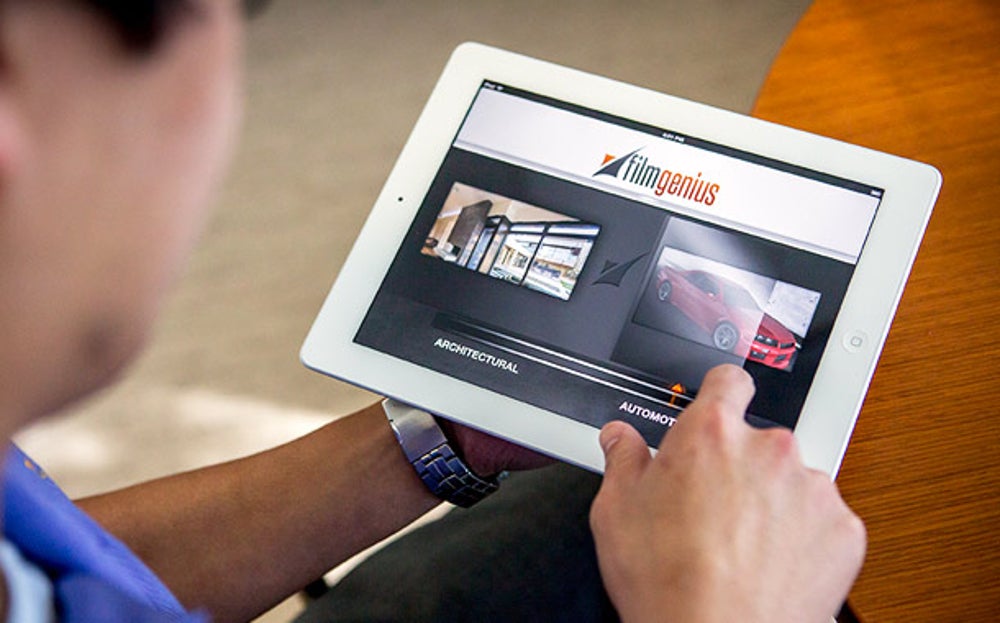 Vinformatix got its start making electronic medical solutions and is now expanding into other applications.
Image credit: Vinformatix

You could say that in a way, founder Padma Vatsavai married into the business. In 2009, her husband's medical group needed an electronic system for its medical records. Vatsavai, a software architect, had a cure.

Now, along with supporting its flagship product in electronic medical records, Vinformatox develops custom software and mobile applications across industries. "There is nothing like taking a client's idea and turning it into reality,” Vatsavai says. 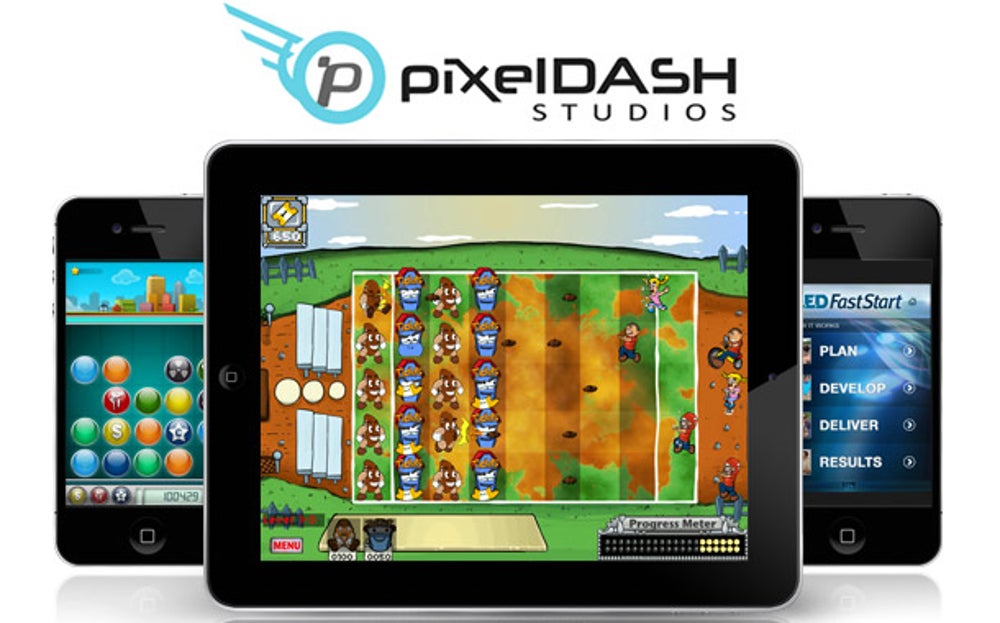 Online and mobile game developer Pixel Dash Studios is the brainchild of software engineer Jason Tate and Evan Smith, an animator and artist.

The young company focuses on both gaming technology and business applications. Pixel Dash Business, a for-hire contract service, builds e-learning modules, training simulators, customized interactive e-books and branded mobile apps. Pixel Dash Games churns out proprietary games for mobile devices and Facebook, such as Fans vs. Franchise, where players have to defend a sports field against encroaching crazed fans, and Tadpole Treble, in which a tadpole swims through musical notes.

Like a growing group of animators, Pixel Dash Studios is taking advantage of Louisiana's digital media tax credits. "The only drawback we've found from setting up camp in Baton Rouge is that the rest of the country is generally unaware of the amazing stuff happening here," says brand manager Claire Fontenot, "But we expect that will all change soon." 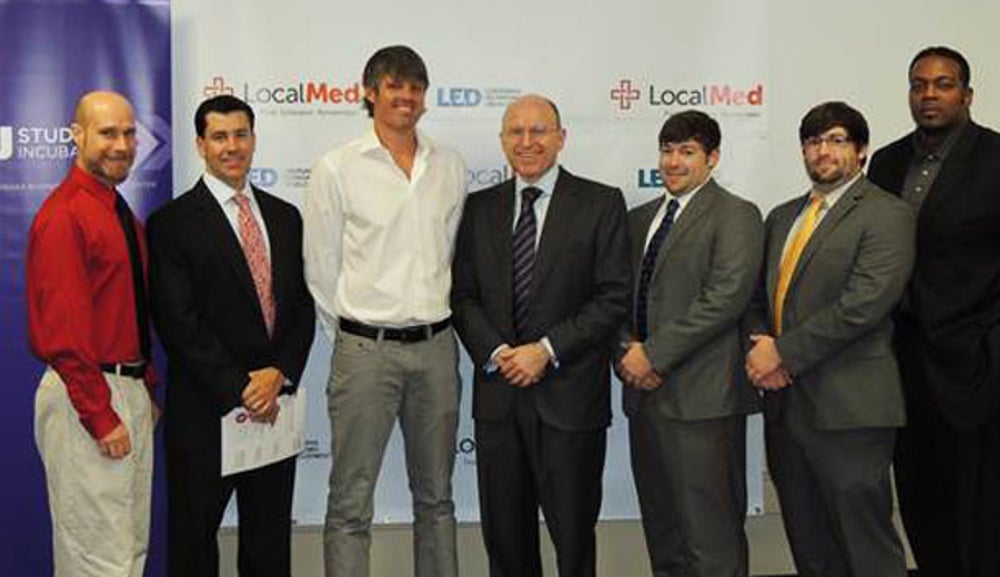 Members of the LocalMed team with Louisiana Secretary of Economic Development Stephen Moret at a press conference announcing a state partnership with LocalMed.

Daniel Gilbert was diagnosed with cancer at age 19. Facing a myriad of medical appointments every week, Gilbert and his twin brother Derek began developing an app to make scheduling and remembering them easier.

Together with startup veteran Keith English, they launched LocalMed, a mobile app that helps people find doctors and dentists, schedules visits and sends digital reminders as the appointment approaches. The company recently signed a deal to provide its scheduling software in more than 1,900 StayHealthy kiosks in pharmacies across the country.

With $3,500 in seed capital from the LSU Student Incubator's Venture Challenge, some private funding and additional financial incentives from the state, LocalMed expects to create 52 jobs over the next couple of years. "Our arrangement with the state of Louisiana and Louisiana Economic Development has provided us with economic incentives to allow us to grow at a rapid pace," English says.