A Look at Indy's Innovators

Sarah Max
April 2, 2013 min read
Opinions expressed by Entrepreneur contributors are their own.

Editor's note: We've been taking a virtual tour of U.S. cities to see how the 2008 financial crisis changed the entrepreneurial landscape, for better or worse. See other installments here.

Bluelock cofounder John Qualls was meeting with a client's legal team in New York when he sensed that his company’s Indianapolis roots was the source of snickers across the table. “I said ‘I know we’re from Indiana, but we’re wearing shoes year round now,’” says Qualls, whose company was an early supplier of on-demand virtual data services.

Like a lot of his fellow Indy entrepreneurs, Qualls is used to jokes about corn, the flatlands and other clichés popular among people who’ve maybe never stepped foot in the state. Laugh all they want. Indiana’s capital city is quietly rolling out solutions for everything from scientific data analysis to digital course material.

This city of about 830,000 people had its share of economic black clouds during the recession. (Please see related story, "Indy's Entrepreneurs Make a Full-Court Press."). The unemployment rate more than doubled to 9.1% between 2007 and 2010. But without the crazy highs of the housing boom and debilitating lows of the bust, Indy is a city on the move.

Here’s a look under the hood at some of Indy’s startups. 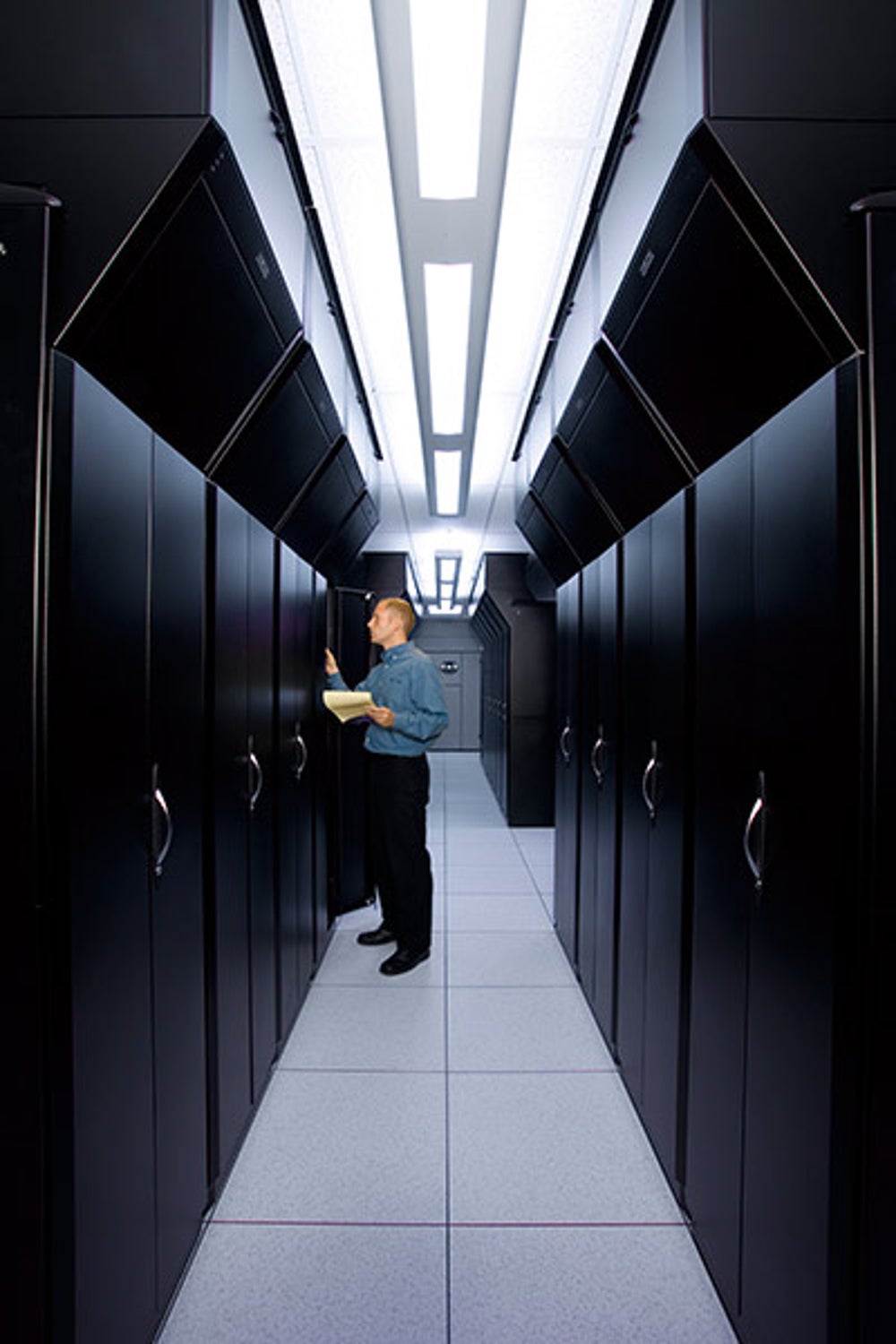 Bluelock was an early provider of flexible data solutions.

The recession was a blessing of sorts for Bluelock. Companies’ technology needs were still growing, but many were looking to do more with less, and without committing to a single path. This was the case in December 2008, when Lehman Brothers called on Bluelock to help it execute its bankruptcy. “They essentially needed to form a new company to shut down the old company, and they needed to do it quickly and with many unknowns about how many employees they’d have or how much storage they’d need,” says Qualls.

Most of Bluelock’s customers aren’t gearing up to shut down. On the contrary, they’re fast-growing entities that don’t want to ramp up technology too quickly – until they land a big project and can’t do it fast enough. That’s where Bluelock’s expertise and on-demand services come in. “We’re taking out the risk and the guesswork,” says O’Day. 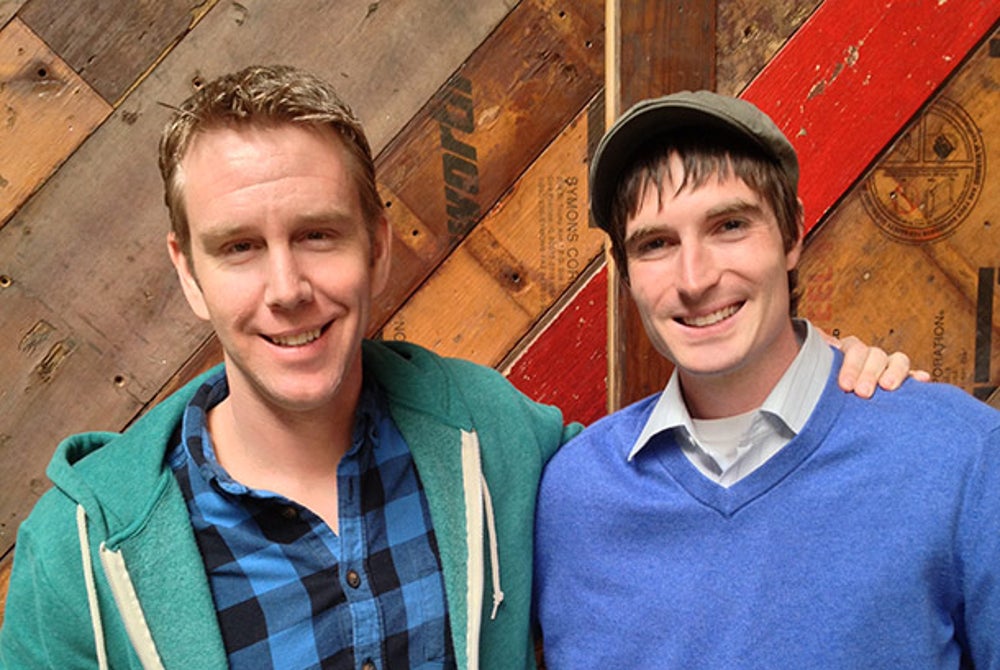 MYTM8 cofounders Michael Coffey and (left) and Michael Hurley hope to take some of the headache out of managing team sports and other activities.

Though his children are still young, Michael Coffey had heard plenty of stories from friends about the logistical troubles that come with managing kids’ extracurricular schedules. A weekend soccer tournament, as benign as it sounds, might entail juggling multiple locations, times and exact fields – details that are often in flux and can quickly change with the weather. Add several activities to the mix and it’s the parent equivalent of directing traffic at Heathrow.

Last fall, he teamed up with Mike Hurley and David Sutton to create a team management platform for managing, in real time and from any device, everything from practice schedules and tournament rosters to fee processing. For the parents, it means consolidating multiple schedules on one calendar, sans schedule on the fridge, phone calls to remember field locations or lost checks for team uniforms.

It took them just three weeks to raise $125,000 in seed funding and three months to launch the beta of MYTM8 (as in “my teammate”). They began offering a preview of the product in March and already have recruited 49 teams. 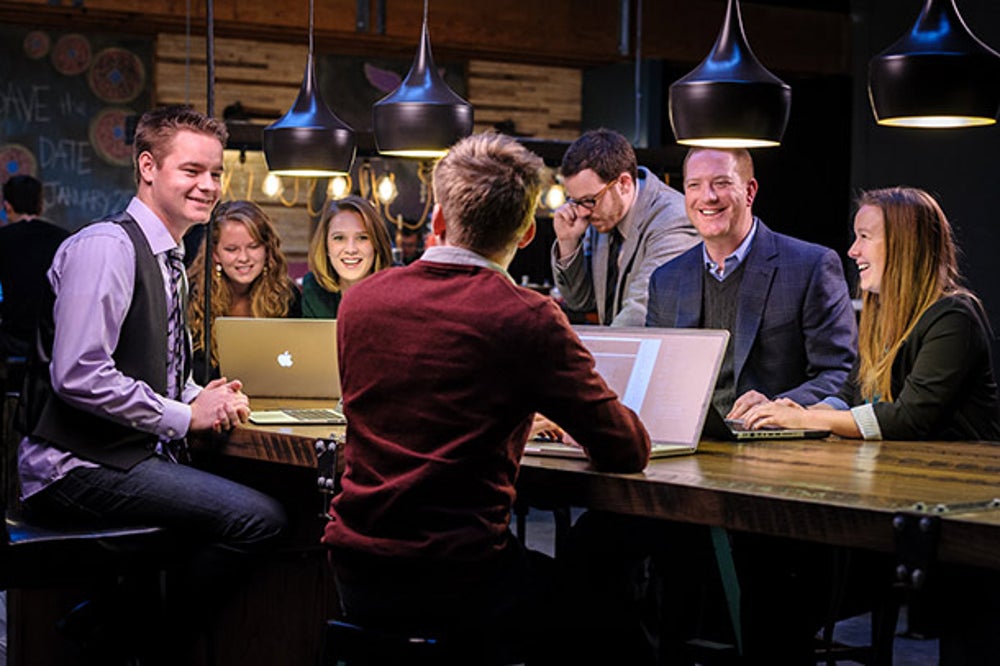 Members of the TinderBox team in their warehouse offices in Broad Ripple.

Despite different entrepreneurial backgrounds, TinderBox cofounders Dustin Sapp, Kristian Andersen and Mike Fitzgerald had long shared a similar frustration: Closing a sale can be a tedious process of creating sales material, sharing, waiting and revising. A good deal of a sales representative’s time, in fact, is spent on administrative work rather than actual selling.

With that in mind, in 2010 they teamed up to launch TinderBox a web-based proposal management platform that, among other things, helps sales and marketing teams manage and collaborate on their proposals, presentations and contracts. At the same time it streamlines the proposal process – users can redline items and sign with electronic signatures – TinderBox also provides sales and marketing teams withanalytics on who accesses their sales content, what pages are viewed the most and what content seems to best resonate with prospects.

The company, which is located in a converted warehouse space in Broad Ripple neighborhood, has tripled its revenue since early 2012, and is in the process of expanding its office space and adding as many as 95 new jobs by 2016. 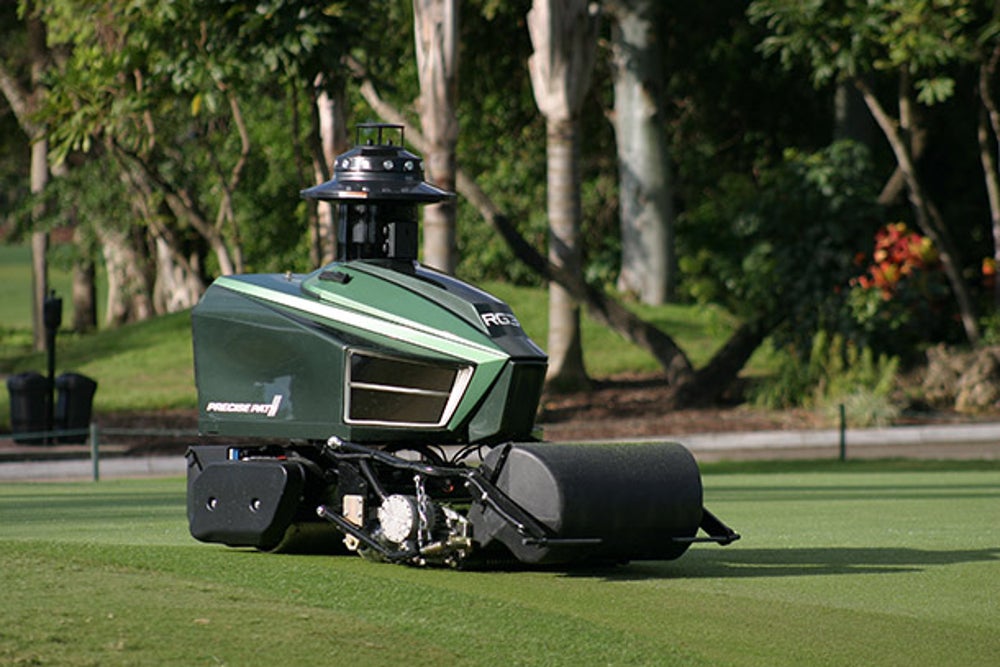 The RG3 robotic greens mower is one of many possible applications for Precise Path Robotics technology.

Keeping golf course greens perfectly coiffed costs U.S. golf courses an estimated $1 billion a year, with the bulk of that spent on labor. Meanwhile, finding reliable operators to do the job is no easy task, and even the best greenskeepers can make costly errors. Enter Precise Path Robotics, which has a suite of products to automate and improve course maintenance, including its RG3 fully autonomous robotic greens mower.

Cofounder Doug Traster unveiled the technology behind Precise Path Robotics at the 2005 DARPA Grand Challenge, a prize competition for driverless mobile vehicles sponsored by the Defense Advanced Research Projects Agency. A year later he teamed up with technology veteran Scott Jones – who is also chairman of ChaCha search engine – to find practical uses for the robotics. In 2008 the company received a $2 million grant from the State of Indiana’s 21stCentury Fund, one of many accolades.

While the golf course is its first foray into unmanned equipment, Precise Path Robotics says its technology has wider applications, from sports field maintenance and large-scale snow removal to warehouse navigation and maintenance. 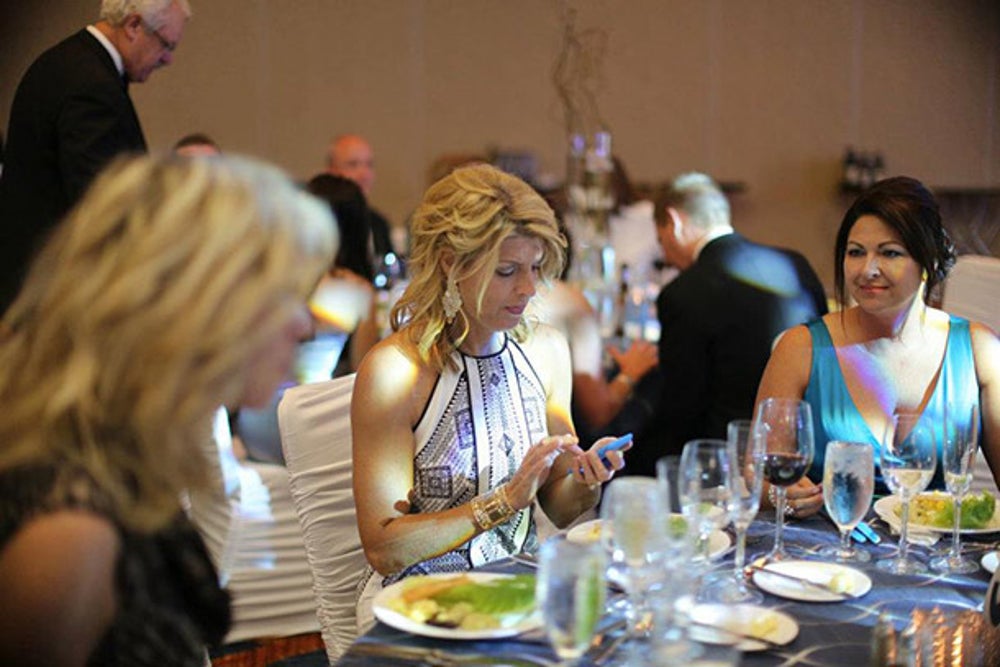 BidPal has moved silent auctions from pen and paper to wireless devices.

Anyone who’s been to a charitable event knows that the ubiquitous silent auction is typically a pen-and-paper affair in which bidders write their price. When the auction closes the highest bidder wins.

After attending one such event, Mark Lacek and Harris Turner noticed that no one in their group had won any silent auction items. They had placed initial bids but then were distracted by socializing and dining and never returned to the auction area. Not only do auction items fetch less than they would with a more robust system, but it's also common for donated items to go for less than their market value.

The solution: Develop a wireless, handheld device on which people bid. When they’re outbid, it notifies them, and they can bid again from wherever they are.  That idea has since evolved. Not only can attendees use their own wireless devices to bid, they can set a maximum and let BidPal do their bidding for them.

The company, which offers a suite of services, has helped charitable organizations raise more than $176 million – and seen its own revenue growth average 430% a year. 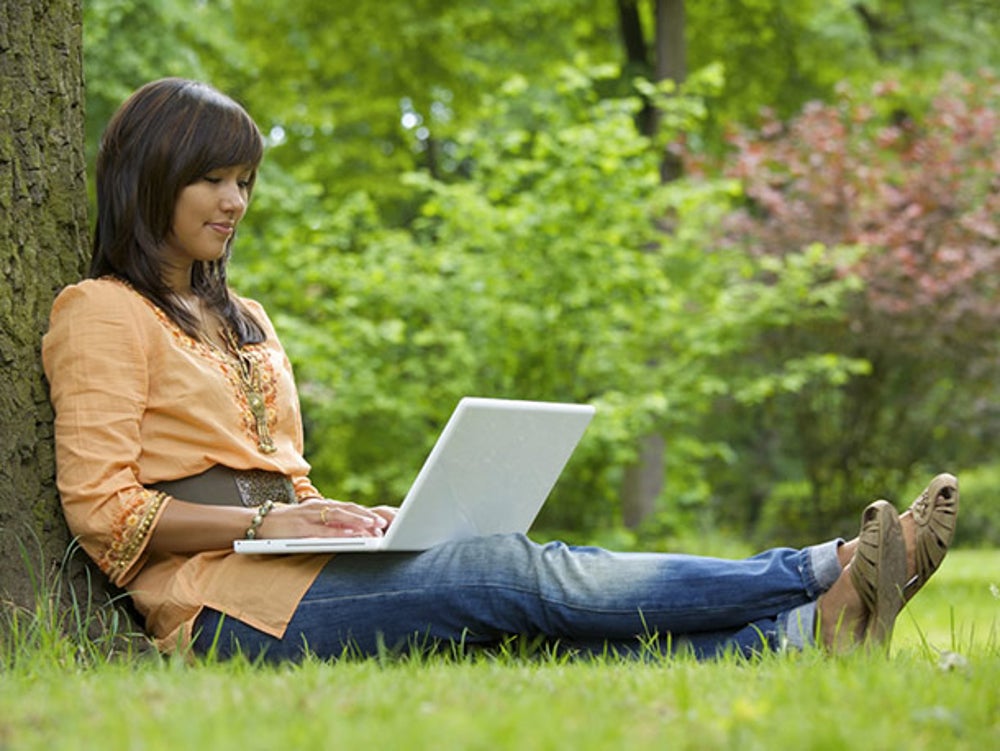 Courseload is reinventing how students hit the books.

While working at Apple in the late 1990s, Mickey Levitan started pondering how digital technology could be applied to higher education. In 2000 he moved to Indianapolis and launched Courseload to aggregate and deliver digital course material. “But the market wasn’t ready,” says Levitan. Indeed, iTunes was still in its infancy, and it would be years before Amazon would unveil its Kindle. Levitan put his idea on a shelf and went to work for someone else.

Nearly a decade later, the market was more than ready. In April 2009, Indiana University called on Levitan to help make digital course material widely available by the start of the next school year. “We had no time, no team and no money,” says Levitan, who teamed up with Alan Dennis, a leading researcher in information systems.

Fast forward to today, and Courseload is working with more than 50 schools. Students using Courseload get immediate access to assigned course materials, which they can access via any device with a web browser and print as needed. Schools, meanwhile, guarantee that all students will pay for the textbooks but at significant pricing reductions.

Localstake cofounders Kevin Hitchen, Ryan Flynn and Brandon Smith (from left to right) at their offices in a former automobile manufacturing facility.

Kevin Hitchen and Brandon Smith were analysts working in J.P. Morgan’s private wealth division when, like a lot of investors after the financial crisis, they wanted to explore stock market alternatives for their personal portfolios. One such route was private business investing, but investors typically need to be accredited and have deep pockets to meet the minimum.

The duo teamed up with Ryan Flynn, a former investment banker, and went to work creating Localstake, an investment marketplace for investing in local private businesses. The idea is modeled after a traditional online broker, available to accredited and non-accredited investors alike, and with minimum investments starting at $500. For private companies looking to raise capital, it’s potentially less costly and more expedient than traditional routes.

The company, which completed its registration as a broker dealer with the Securities and Exchange Commission last year, has managed to raise two rounds of funding of its own and is now up and running. 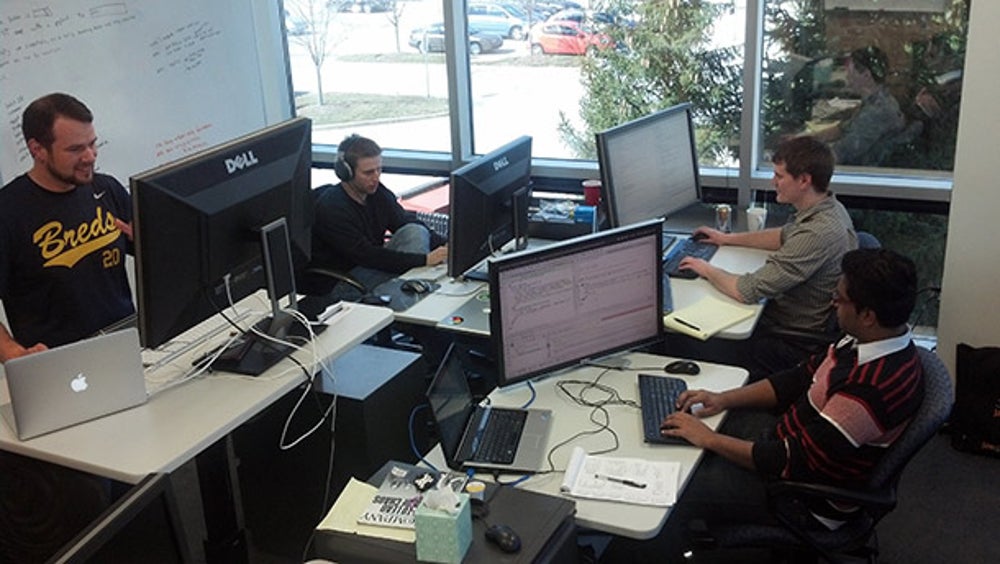 The Indigo Biosystems team builds data analysis solutions for scientists in labs around the world.

After getting his Ph.D. in analytical chemistry from Purdue University, Randall Julian Jr. worked for Discover Chemistry at Eli Lilly for 14 years. Suffice to say, he knew his way around a lab. But like a lot of researchers in his position, he found himself spending a great deal of time in front of a computer, cutting, pasting and shuffling between programs to track and present that research.

Looking for a more eloquent solution, he turned his attention to developing software to automate data analysis and visual interpretation. Today, Indigo Biosystems’ is used in labs all over the world; after doubling in 2010, revenue increased 222% in 2012. With better tools at their fingertips scientists can spend less time in the role of clerk and more time focusing on new discoveries. The company is now working on predictive analytics tools to spot potential problems in the lab before they happen, potentially improving the quality and timeliness of results.