In the last of a four-part series on Zappos CEO Tony Hsieh's Downtown Project, we look at the city in the process of reinvention.
Next Article

Zappos CEO Tony Hsieh wants to transform Sin City's downtown into a thriving, culture-rich community with his $350 million Downtown Project. Entrepreneurs are the lynchpin of the five-year plan, which began in 2011 and includes an emphasis on the arts, education and urban development. Hsieh's personal fortune is funding much of the project with $50 million being invested in tech startups and another $50 million in small businesses. Education initiatives are being allotted $50 million, while the remaining $200 million is being spent on real estate. In this final part of our series, we look at the city in the process of reinvention. 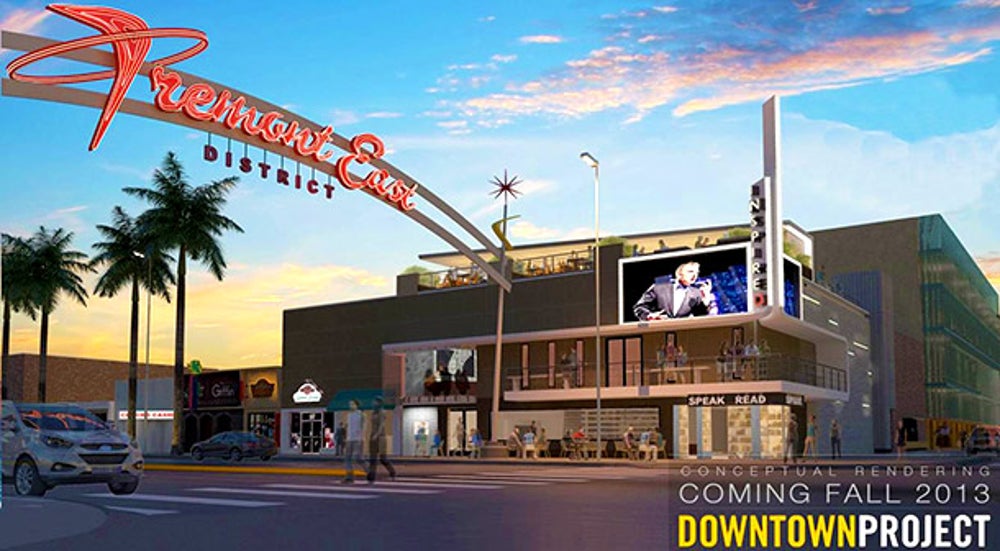 Zappos CEO Tony Hsieh's Downtown Project is focused on the Fremont East district in Las Vegas. This artistic rendering shows how the entrance to the area will appear after the makeover. "Once Fremont East is happening, then we can expand into other areas" of the city's downtown, Hsieh says. 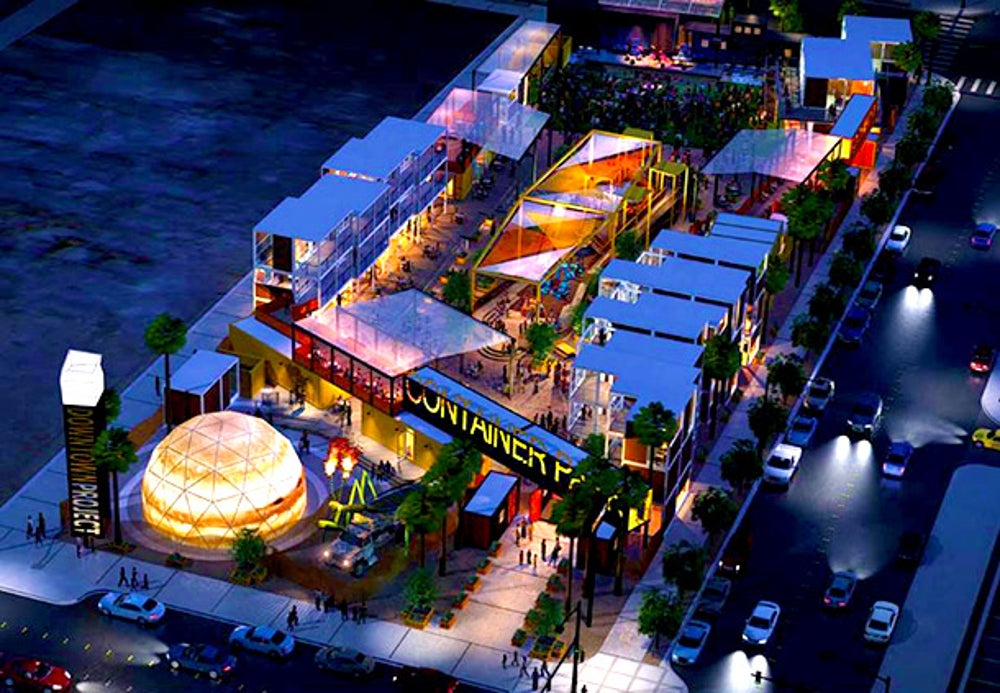 The Downtown Project is investing $50 million in local small businesses, including an outdoor market called the Shipping Container Park shown in this artistic rendering. It will house the businesses of 25 to 30 entrepreneurs working in converted shipping containers to test retail and restaurant concepts.

Community Area in the Container Park

The Shipping Container Park will include community space and outdoor seating, shown in this rendering. The outdoor marketplace is being designed so patrons will enter through one entrance but will be able to exit only at the opposite end of the park. The idea is to get them to walk an extra block to where they parked. Hsieh says it's an effort to create more encounters where people randomly run into each other and share ideas, which he calls "collisions." 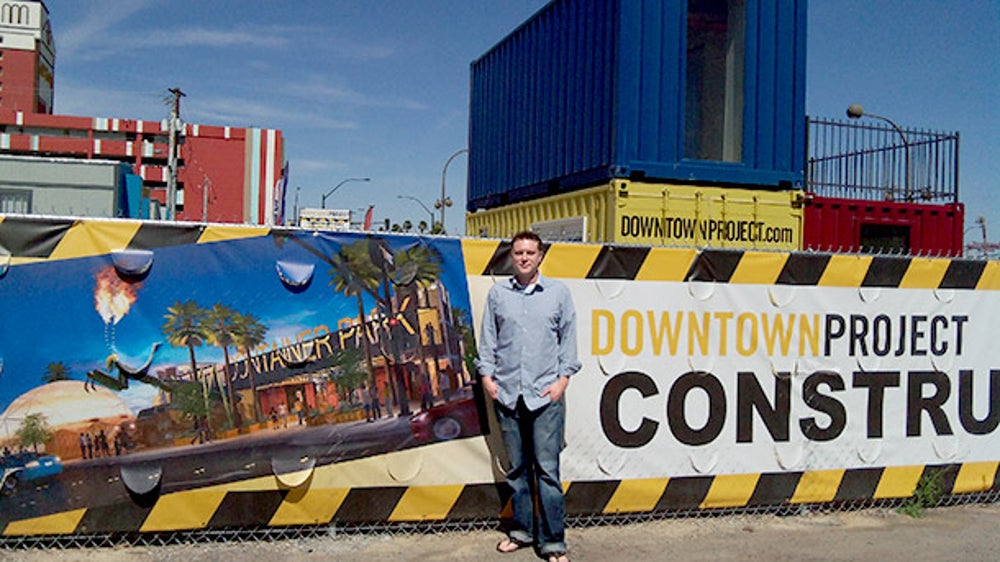 Don Welch, pictured in front of the Container Park construction site, manages the $50 million small-business development initiative for the Downtown Project. To date, 17 local businesses have received investments from the small-business fund and another 14 have been approved. The number is expected to total 60 by year's end. 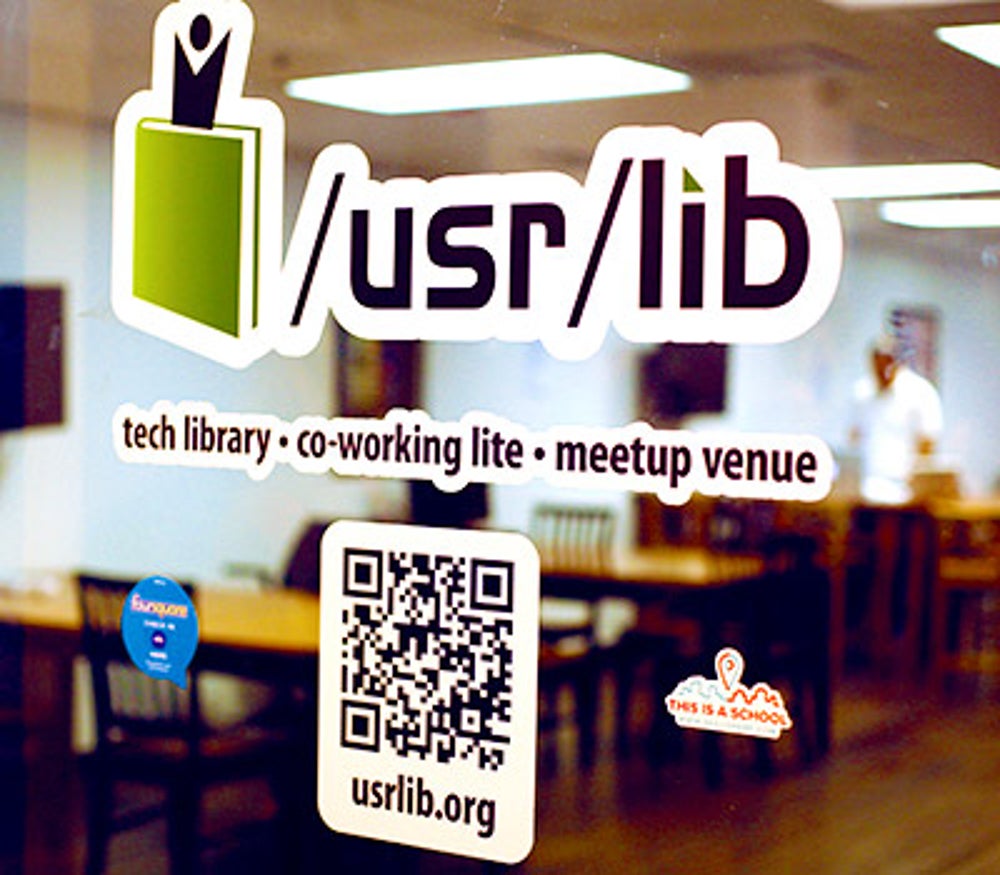 Tech Jelly at the Beat Coffeehouse 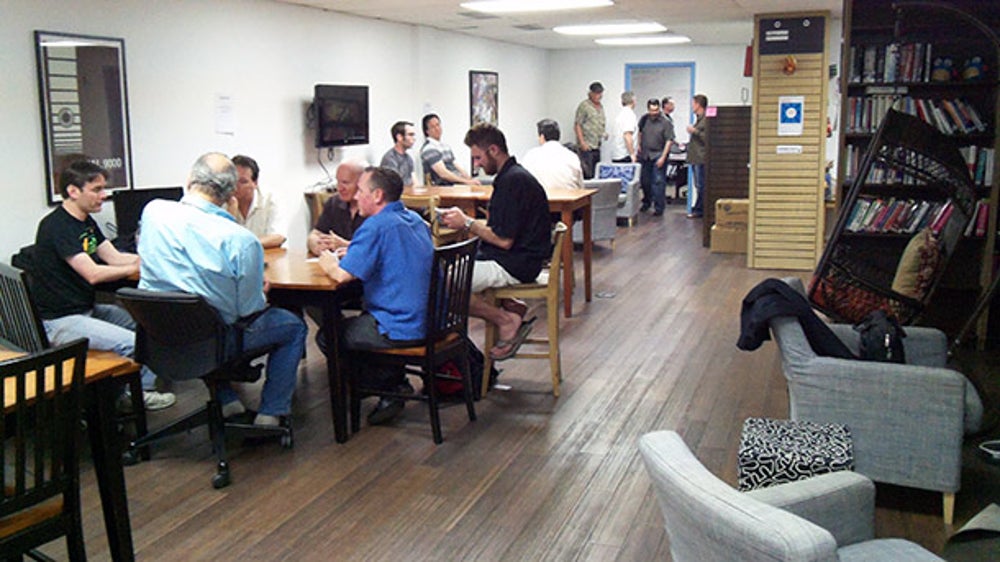 Inside the Tech Jelly, people can choose to work alone or in groups, and in the back room there are breakout sessions where anyone can sign up to speak about topics related to the entrepreneurial or startup community. It's an informal event that is offered at no charge and people do not have to register in advance. 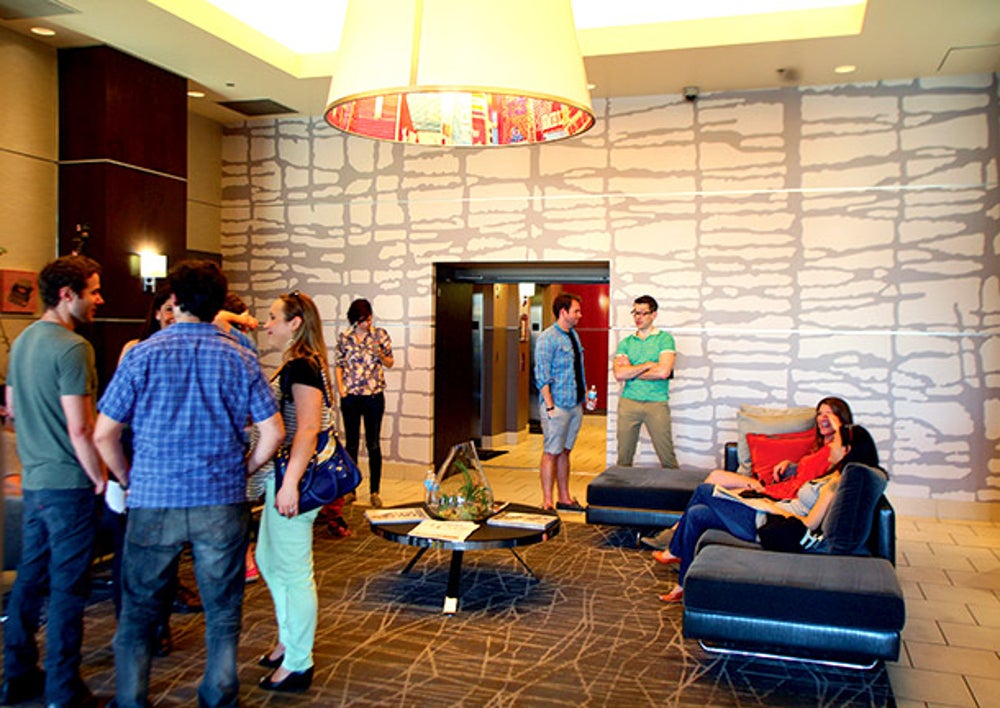 Furnished apartments are set aside at the Ogden, a luxury high-rise condominium, for invited guests of the Downtown Project. Visitors may include community leaders from other cities or founders of startups that Hsieh hopes will relocate here. The guests stay at no charge and in return they are asked to give back to the community in some way, through talks, mentoring or participating in local activities. 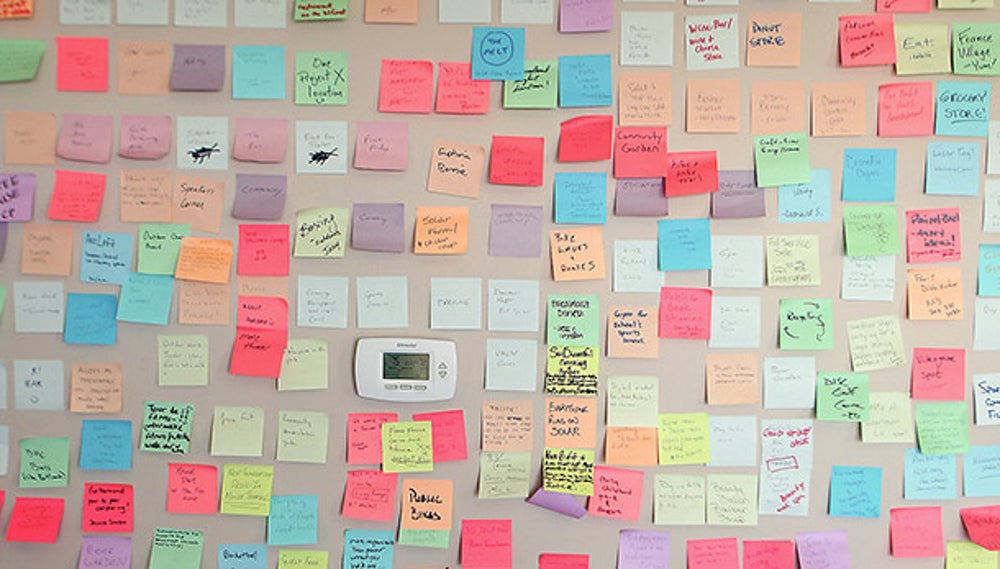 When visitors take a tour of the Downtown Project, one of the stops is Tony Hsieh's apartment, which is three units combined into one. One of the walls is covered in sticky notes each with a handwritten business idea submitted by members of the community. 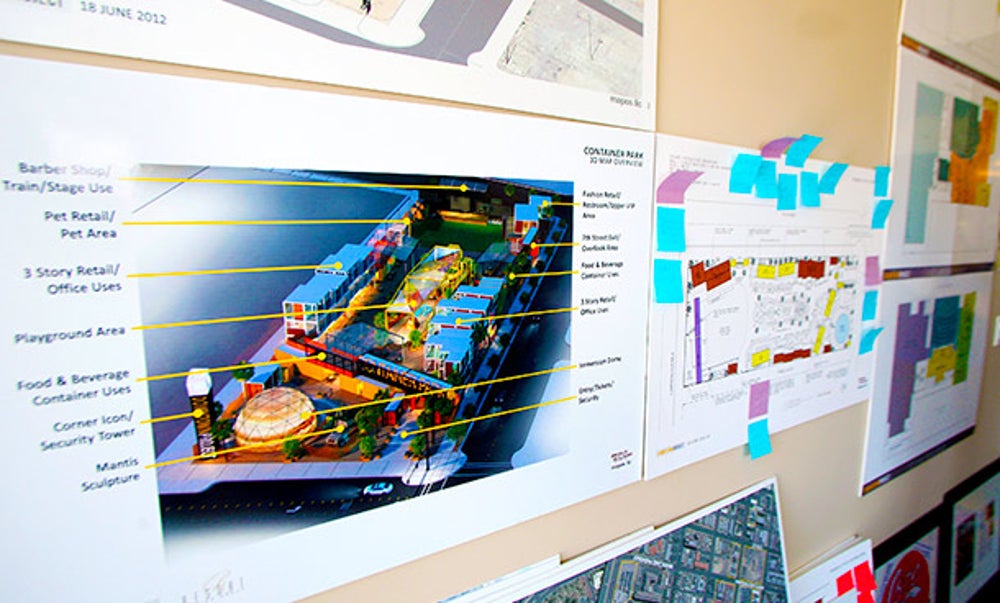 As invited guests walk through Hsieh's living room, at least one wall is covered with architectural renderings and colorful illustrations of what's to come with the Downtown Project. 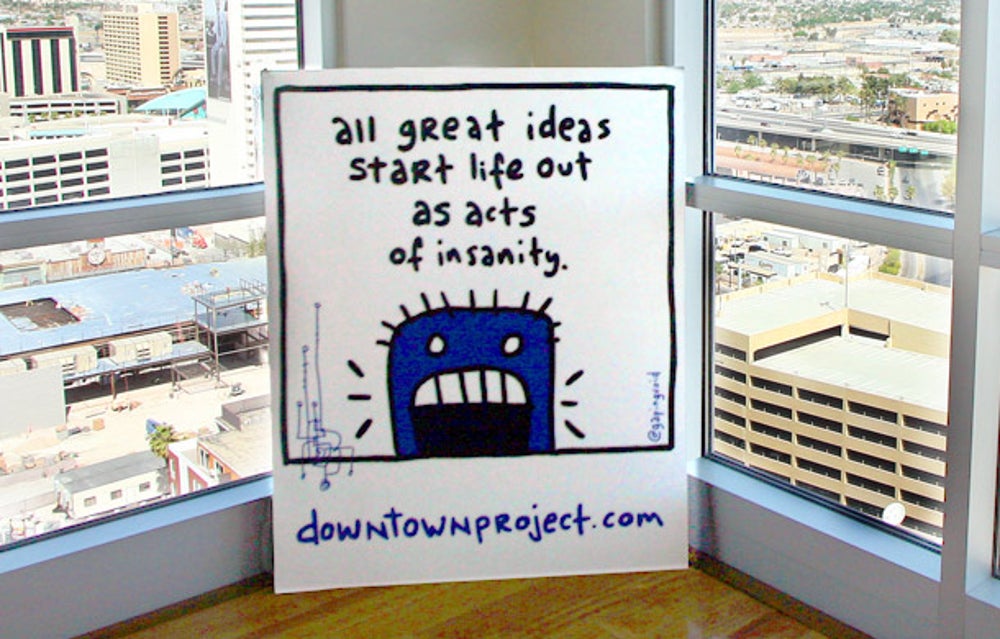 During the Downtown Project tour, visitors can't miss the inspirational quote that stands alone in the corner of Hsieh's apartment. The placard serves as a visual reminder of the $350 million bet Hsieh is placing on a city that knows all about high stakes. 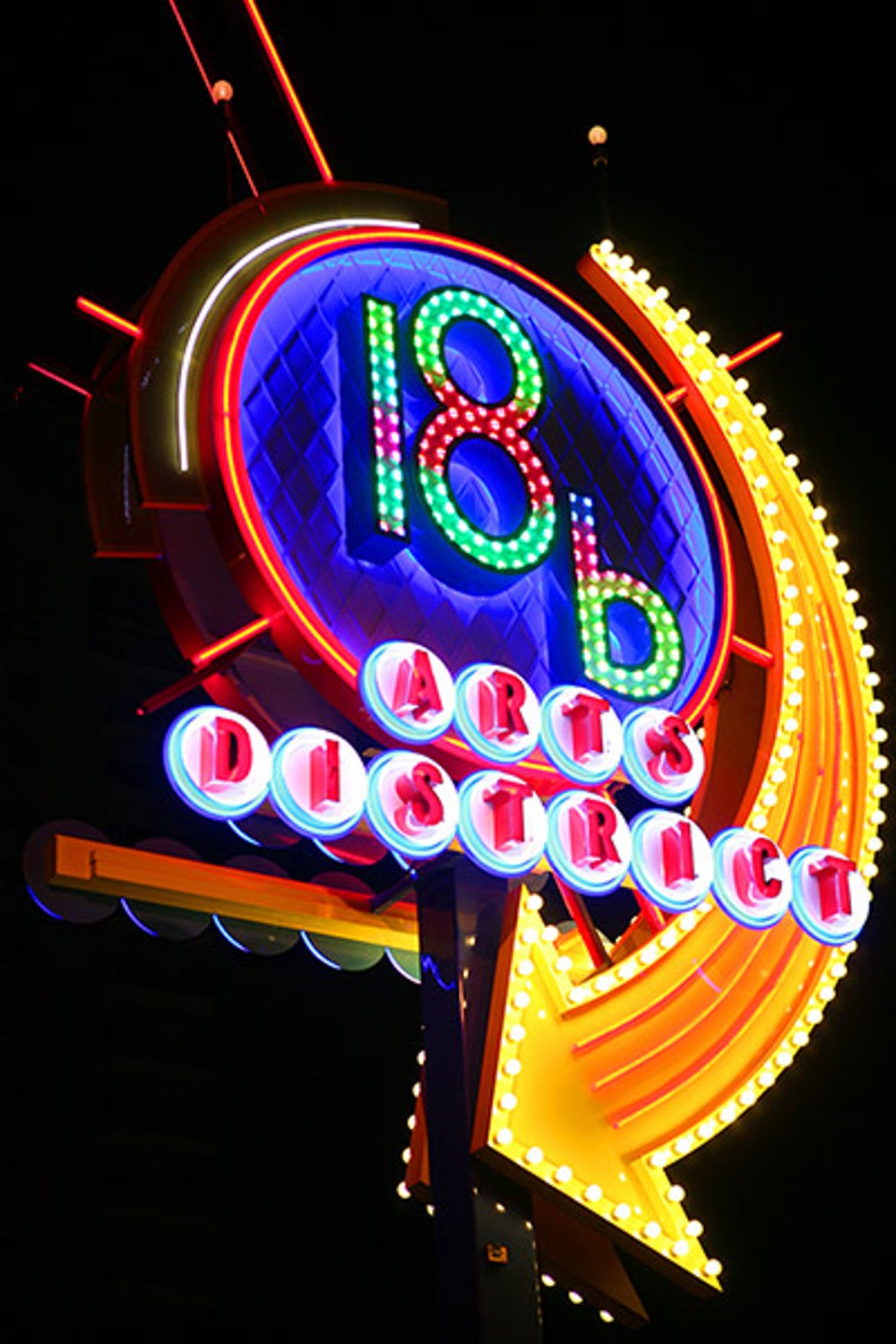 First Friday, a popular arts-and-music festival in downtown Las Vegas, stretches from the Arts District to Fremont East. The festival is hosted by the Downtown Project on the first Friday of every month. 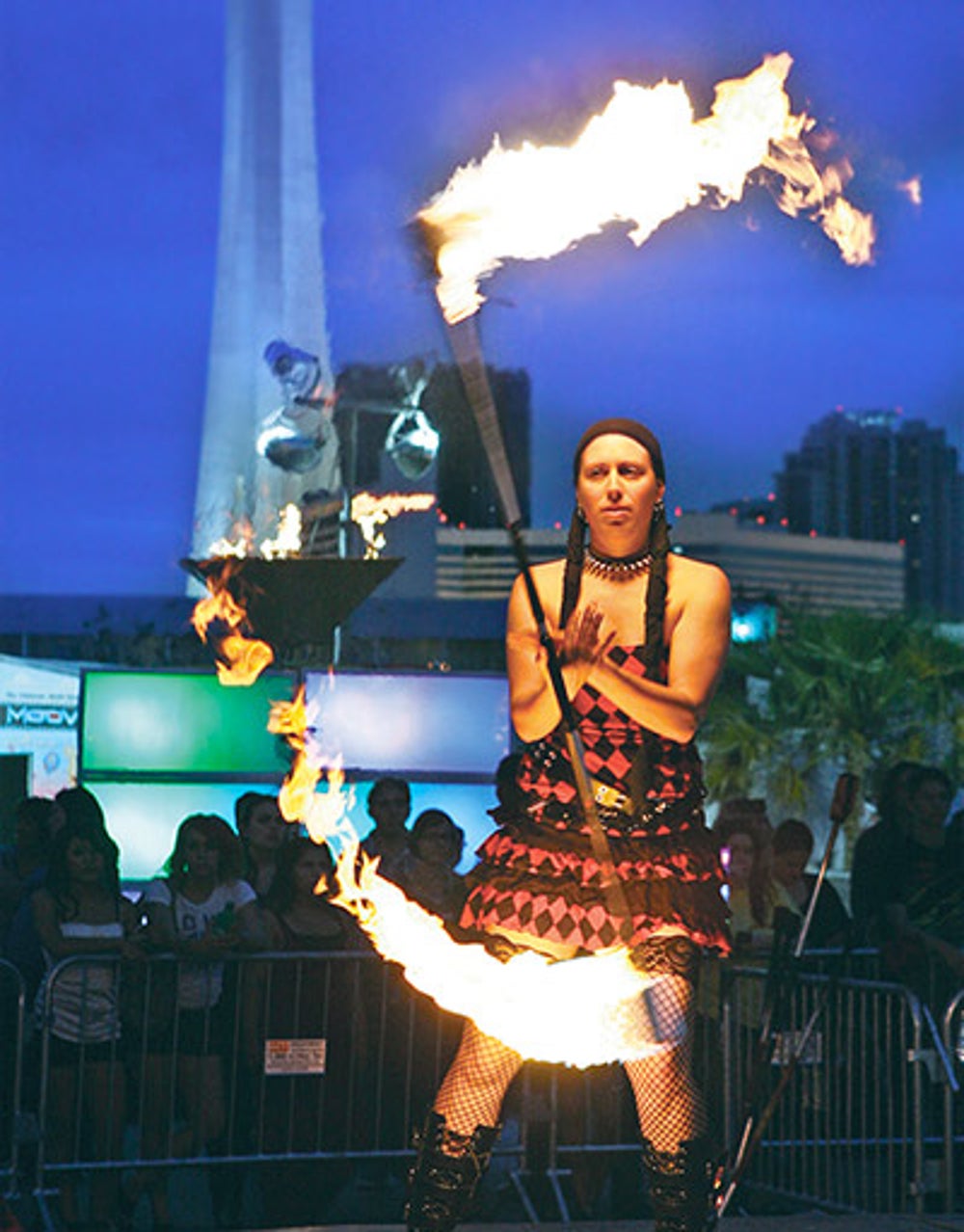 Fiery attractions like this one draw crowds at First Friday. More than 25,000 people join the festivities every month. 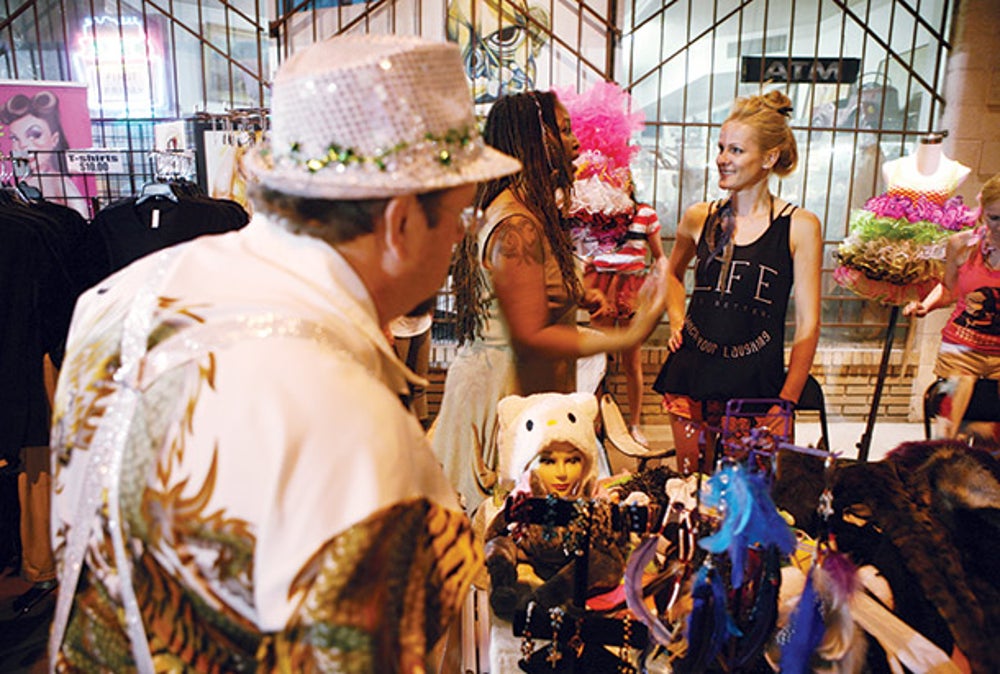 More than 100 artists and crafts vendors dot the city streets to sell their wares at First Friday. There are also about 35 food trucks and vendors. 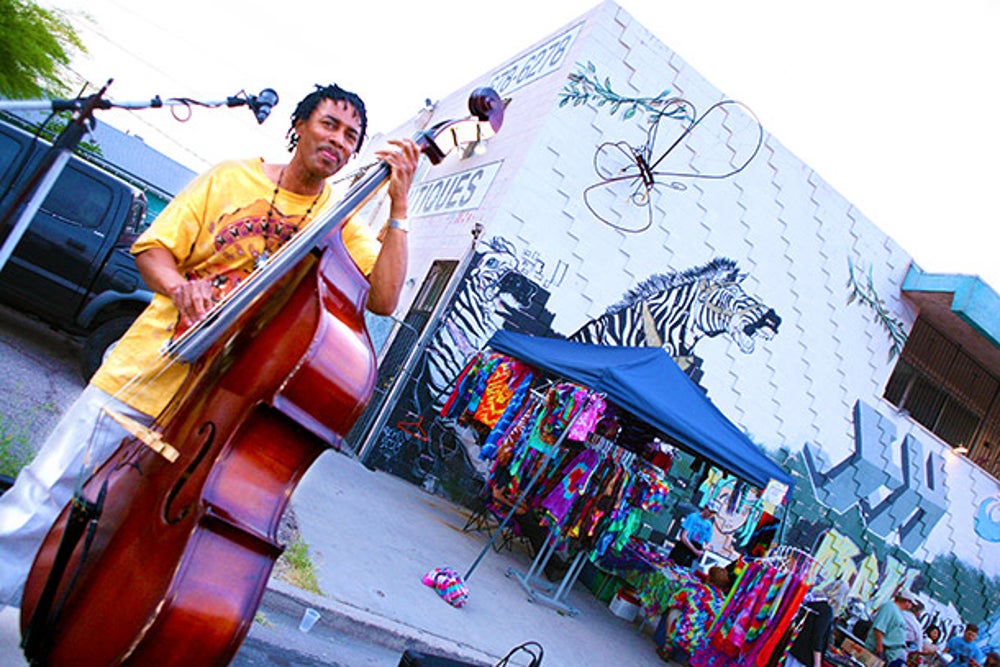 Music is also a big attraction for spectactors at First Friday, which plays host to up to 20 live bands and DJs. 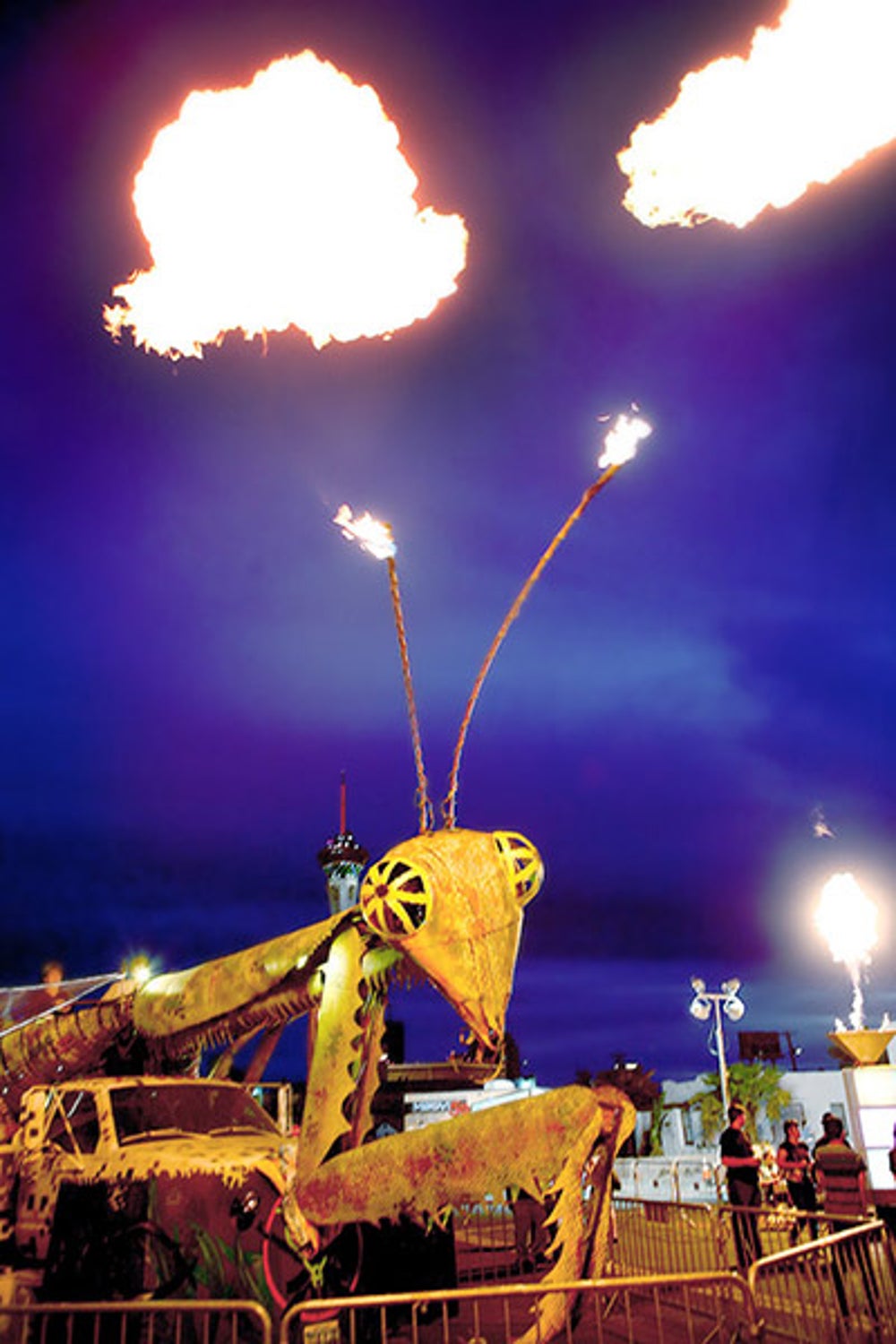 One of the massive spectacles at First Friday was a praying mantis, a 30-by-40-foot, metal insect scultpure that shoots flames from its antennae. The work had previously appeared at the Burning Man festival in Black Rock City, Nev.