Kathleen Davis
August 29, 2013 min read
Opinions expressed by Entrepreneur contributors are their own.

A brand's logo can become interchangeable with its identity in the public's eyes. If it's bold and instantly recognizable, a logo can become so ingrained in pop culture knowledge that it almost advertises itself. If it's done wrong, your brand can languish in obscurity.

Related: 5 Signs that You Need a New Logo

Here is a look at some of the most recognizable logos of our time and the radical transformations they have undergone on their way to brand domination.

Between ending its work-from-home policy and acquiring Tumblr, Yahoo has undergone several big changes since Marissa Mayer took the helm just over a year ago. The latest step in its reinvention: A new logo.

Earlier this month, the internet giant announced that it will introduce a new logo every day for the 30 days, announcing the final logo on September 4. Each day's logo variation will be used throughout the site and posted on the company’s Tumblr blog, Twitter page and Facebook page.

Related: Yahoo to Roll Out a New Logo Each Day for the Next 30 Days

Apple's original logo was designed by co-founder Ronald Wayne and didn't even last a year. Steve Jobs demanded a redesign because he felt the drawing of Isaac Newton sitting under an apple tree was too intellectual and intricate to be stamped on computers.

The now iconic image of an apple with bite taken out of it has been with the company since 1976, but the tech giant ditched the rainbow colors for the current slick chrome shade in 1998.

While some might think that Starbucks sprung up in Seattle around the same time as grunge music in the 1990s, the coffee giant has actually been around since the 70s. Back then, the Starbucks logo was a brown print of a woodcut illustration of a topless siren from Greek mythology.

The company has gone through a few more conservative and modern interpretations since the late 80s, finally shedding the company name on the logo all together on the simpler green and white version that's been in use since 2011.

The tech giant has had several logo makeovers since its inception in 1975. But most of the variations on font of the modest black-and-white company name took place during the 80s. The same logo had been in use since 1987, until it received a buzzed-about redesign last year. The new logo, called "Segoe," incorporated the symbol of the four colored squares, similar to the logo used on its Windows operating system.

Related: What's Wrong with Microsoft's New Logo and How to Avoid the Same Mistakes 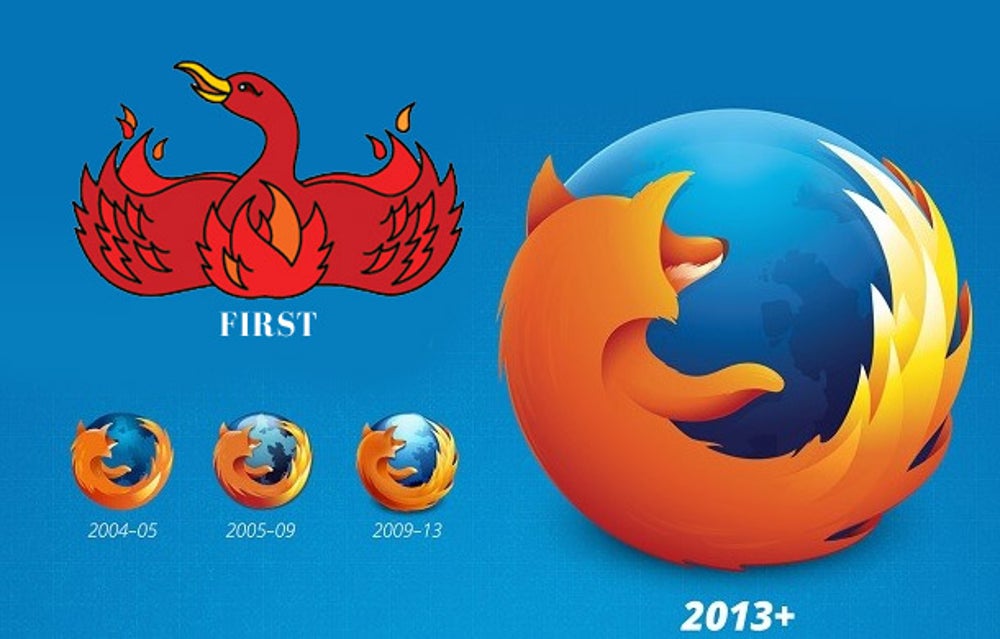 The popular Firefox browser we know today was first born as part of the Mozilla Application Suite in 2002 as Phoenix -- thus the drawing of the red bird with flames. In 2003 it was renamed Firebird, which then became Firefox in early 2004. Since then the logo has had minor tweaks, with the final revamp in June highlighting the flames in the fox's tail a little more.

One of the most recognizable names in camera equipment originally had a name that likely didn't trip from Western tongues. Founded in Toyko in 1937, the company was known as Kwanon, named after a Buddhist figure.

The short-lived first logo reflected these cultural origins with an ornate logo bearing the company's name and a depiction of the Buddhist Goddess of Mercy. But as the company's international presence grew Kwanon evolved into Canon, the typeface became bolder and easier to read and ever since the 50s, an eye-catching red.

The fast food franchise is one of the few businesses where both founder Dave Thomas and his daughter are household names. The logo has included a drawing of an 8-year-old Wendy Thomas since its founding in 1969.

Earlier this year the company dropped the dated fonts and the "Old Fashioned Hamburgers" text for a simpler and more modern portrait of famous redhead with the company's name.

The National Broadcasting Company's logo has gone through many incarnations over its long history. The recognizable peacock logo has been linked with NBC since 1956, falling in and out of use over the decades. It was originally created for the network's color broadcasts, and has undergone several redesigns.

By 1986 color broadcasts were no longer a selling point, but the peacock had strong brand association, with NBC sometimes referred to as the "Peacock Network." The simpler rainbow bird with bold lettered typeface had staying power and was in use until 2011, when a slightly stylized version of the peacock was rolled out.

McDonald's Golden Arches maybe identifiable the world over, but they weren't always part of the fast food giant's branding. The $35 billion company originally started in 1940 as a barbecue restaurant, owned and operated by Richard and Maurice McDonald.

The iconic arches were born from arch-shaped signs on the sides of a franchised "walk-up hamburger stand" in the early 1960s. When viewed from a certain angle, the arches formed the letter M, making it perfect for the new logo. Over the years the logo has gone through several small redesigns, all using some variation of the big yellow M. The current version has been in use since 2003 and incorporates the grammatically incorrect "i'm lovin' it" slogan.

The popular plastic building toys are now a part of many childhoods the across the world, but the company had a humble start in the 1930s. The first versions of the logo were used as a decal on wooden toys. By 1953, the first version of the white bubble font and red background made its appearance. With two brief exceptions in the 1950s, the logo has only made slight deviations over several decades.