These 10 franchises are leading the way into the New Year.
Next Article
Jason Daley
Magazine Contributor
January 6, 2014 8 min read

The results of Entrepreneur's 35th annual Franchise 500 confirm that franchising continues to rebound, with these top 10 franchises leading the way. Here we highlight their success strategies and plans for the upcoming year. 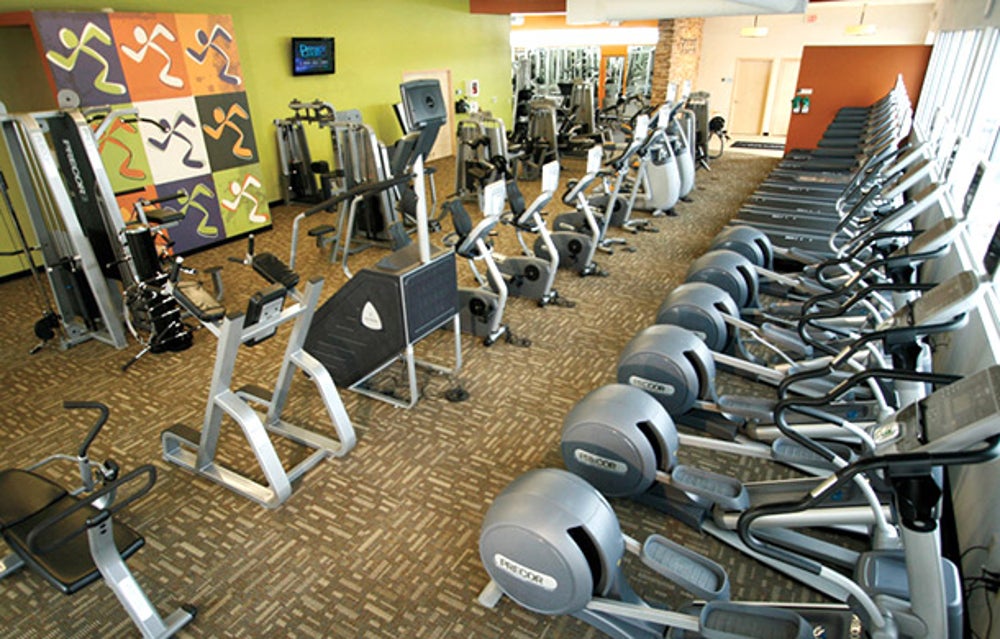 Some 50.2 million Americans belonged to health clubs in 2012, according to the International Health, Racquet & Sportsclub Association. Today, about 1.9 million are Anytime Fitness members--a huge piece of the pie that's getting bigger every year. And it's safe to say that the 24-hour gym's clients, employees and franchisees are among the most enthusiastic people in the fitness industry.

That's because the roughly 2,500 Anytime clubs focus on people and culture. The company carefully selects its employees and treats them well, committed to the idea that a workplace should develop and challenge, not be stagnant or boring. Clients, meanwhile, appreciate the convenience of 24-hour accessibility to the small gyms--typically 2,500 to 5,000 square feet--whose staff and personal trainers take an interest and encourage them to push themselves. 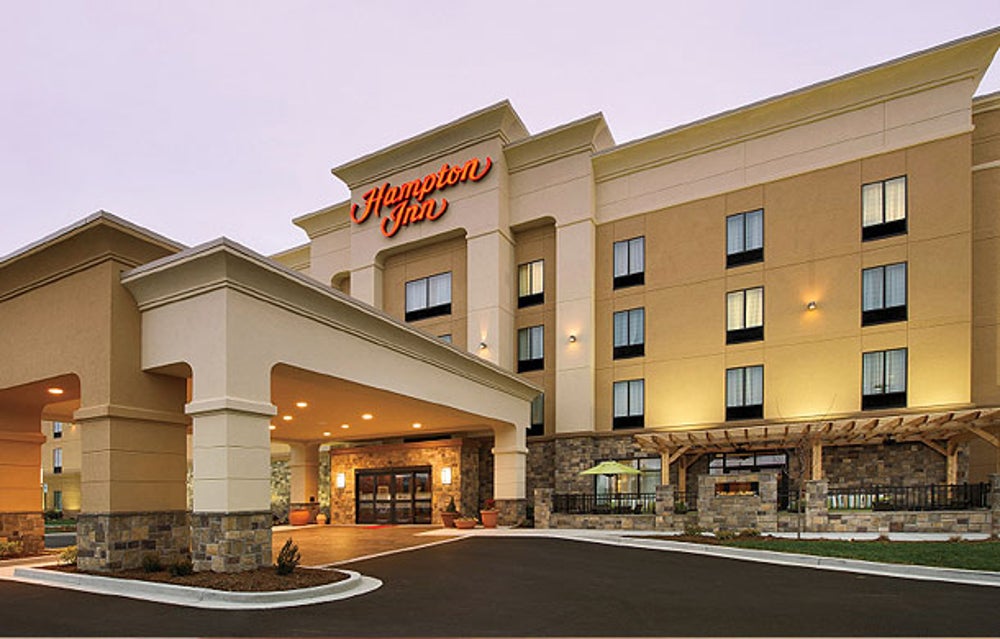 Consider Hampton the U.S. ambassador of the hotel business.

The company, which counts more than 1,900 units worldwide, has become the hallmark of American friendliness, cleanliness and convenience in the value-price hotel sector, offering free Wi-Fi, hot breakfast and an audacious money-back guarantee.

During the recession, when business travelers traded down and vacationers were looking for strong value, Hampton seized the opportunity to draw them in. And many of those customers never left. But most exciting is the brand's international extension, Hampton by Hilton, which is taking American hospitality to places it has never gone before. Last year, Hamptons opened in Poland, Russia, the Netherlands and Romania, in addition to setting up locations in 14 U.S. states. 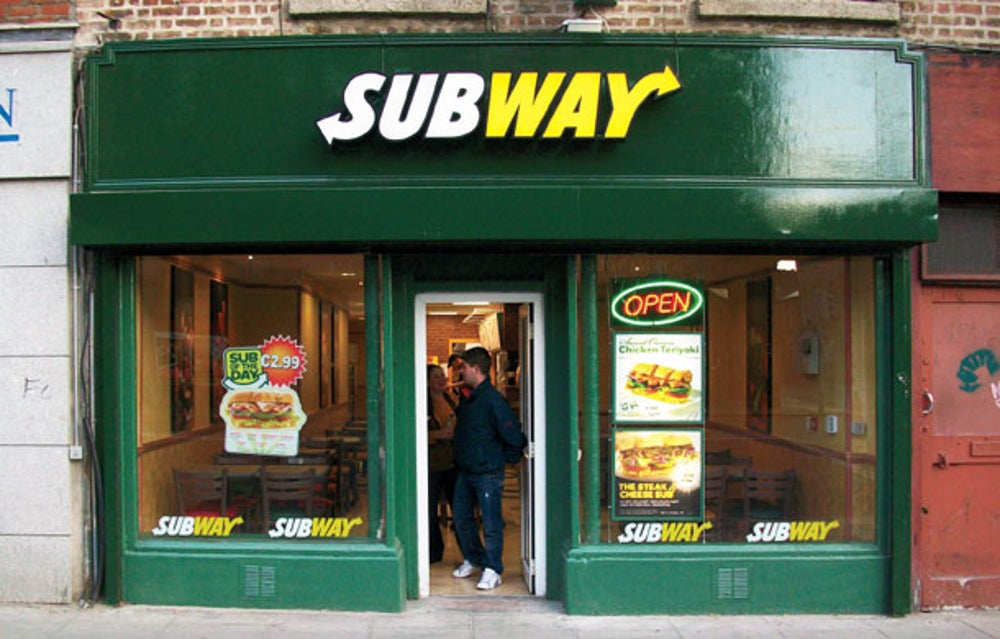 2013 brought several milestones to Subway. Most important, the sandwich empire passed the 40,000-store mark in August, making it the largest restaurant chain in the world. Additionally, international growth outstripped U.S. sales: Subway added 1,600-plus international locations last year--including its first stores in Kenya, Djibouti and Estonia. The company also added 883 units at home, about 43 percent of which went into nontraditional locations like colleges, airports and healthcare facilities--an initiative that has helped its growth domestically, even as it reaches saturation levels. At the same time, Subway continued to push into the breakfast market, offering what it contends is a more healthful alternative to the morning menus at other fast-food concepts. 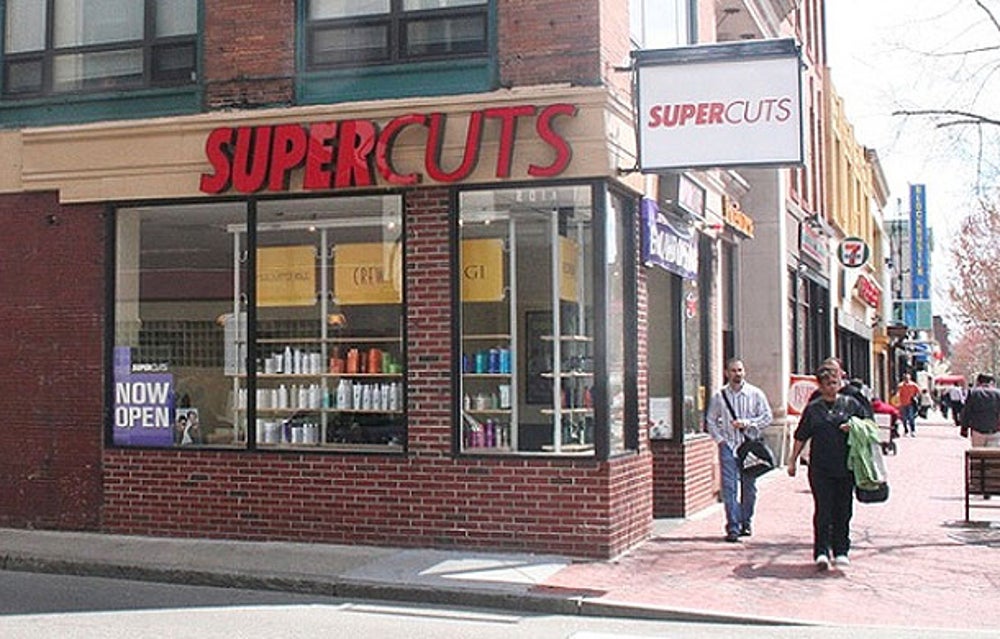 A couple of years ago Supercuts, one of the value-based lines in the Regis hair-salon empire, rebuilt its franchising program, bringing on new executives, new recruitment tactics and a new energy to expand the 2,300-unit chain. Now the brand is seeing results:

Supercuts has been successful in targeting multiunit franchisees, helping them open units more quickly. Since stores are run by managers, and owners don't need to be stylists themselves, Supercuts is actively recruiting business-savvy franchisees who may not be interested in day-to-day operations.

But Supercuts isn't in the top 10 just because it's good at selling units. The franchise sets itself apart from other concepts through its outstanding training program, with 85 full-time trainers who travel from unit to unit, sharpening employees' technical and customer-service skills. 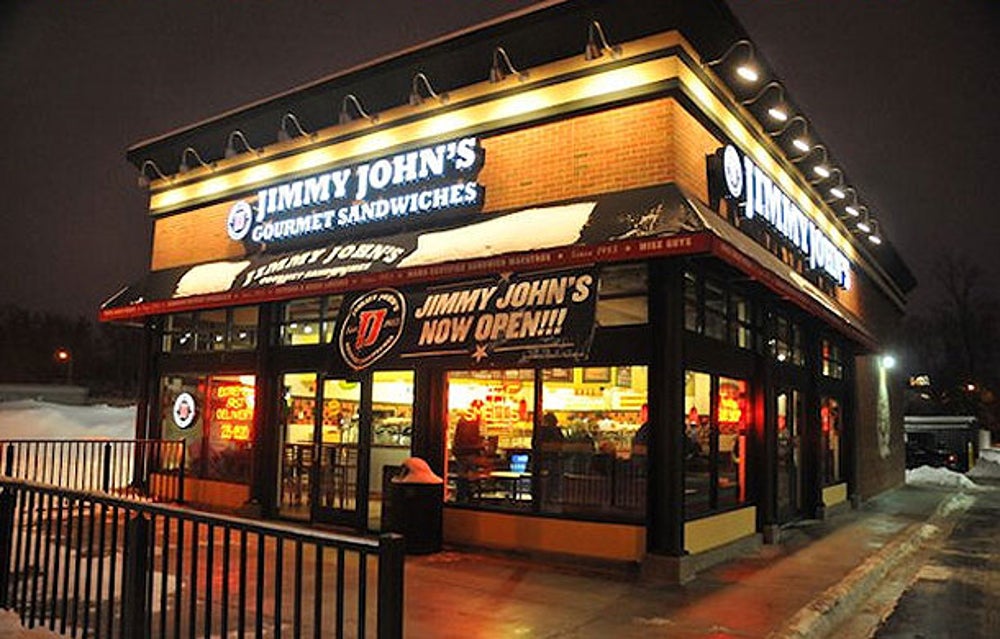 It may seem like Jimmy John's stores popped up nearly everywhere overnight, but the company's journey to some 2,000 units--including an estimated 275 added in 2013--was the result of a 2002 franchising-program revamp that focused on discipline and method.

Jimmy John's doesn't deal in special offers, coupons or limited-edition menu items. Instead, it relies on the merits of its sandwiches, chips, cookies and pickles, prepared "freaky fast" and with an upbeat attitude. And that was enough to earn the company a big jump from No. 12 on last year's Franchise 500(R). Jimmy John's expects similar steady growth in the coming years. Not freaky, but pretty fast just the same. 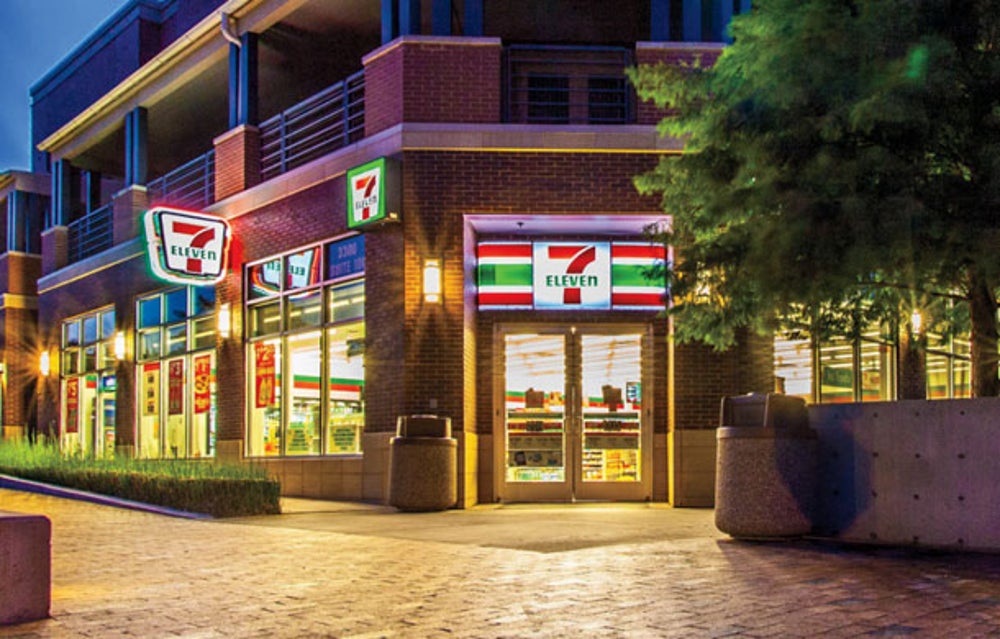 Everyone. With more than 51,000 stores worldwide and more than 10,200 in North America, it may seem unlikely that there are any untapped markets for the ubiquitous convenience store. But there are--lots of them. In 2012, 7-Eleven moved into Charlotte, N.C., Jacksonville, Fla., and Milwaukee. And last year it sped up its expansion in New York, Los Angeles and San Diego. The main strategy has been to buy local convenience-store chains, then upgrade and rebrand them. (The company already has some 1,100 stores in its inventory ready for franchisees to purchase.)

In recent years 7-Eleven has become more than a traditional convenience store. With a growing hot-food menu, it has become a low-cost lunch destination, and its array of store-branded products--kept inexpensive due to the company's massive buying power--has turned it into a quick stop for everything from batteries to plastic plates. The chain plans to continue promoting fresh fruit and more healthful snacks and will even carry more upscale wines at some locations. But don't worry--the Big Gulp isn't going anywhere. 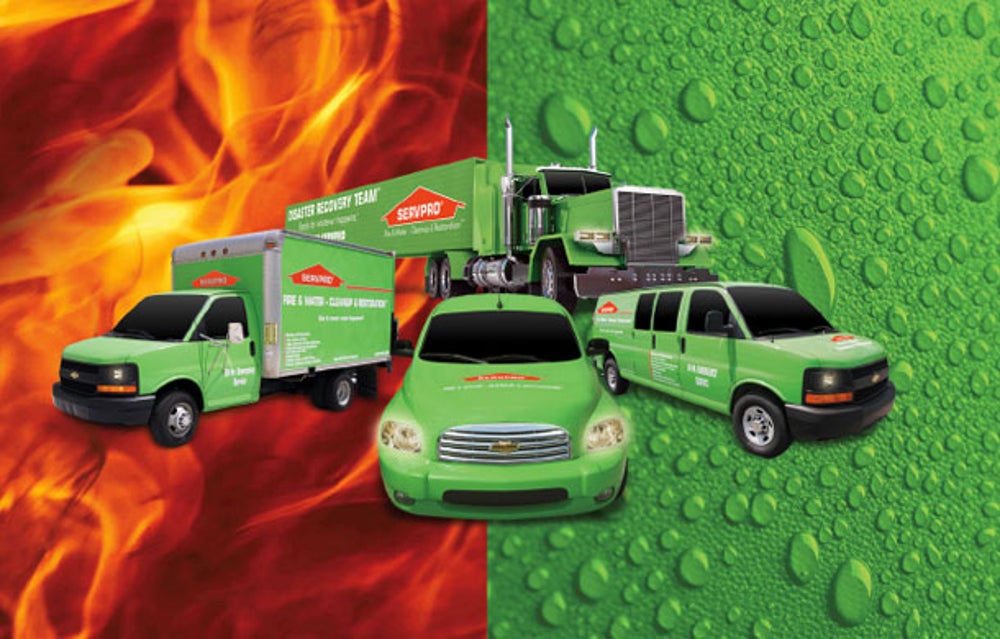 Reaching saturation levels can be a scary prospect. When growth slows, it can mean that momentum and revenue ease off, too. Not so for 45-year-old Servpro, one of the largest restoration companies in North America, with more than 1,600 units in the U.S. and Canada. For Servpro, reaching maturity means it can do things that smaller competitors can't, like responding en masse to major disasters. In 2013 Servpro's Storm Team was able to dispatch hundreds of crews to hard-hit areas, like Colorado, which saw major flooding in September, and Alberta, Canada, which faced a catastrophic deluge in June.

Given its size and reputation, it's not surprising that Servpro signed on as a primary national sponsor of the Red Cross's Ready Rating program, an online system that shows individuals and businesses how to prepare for and assess disasters in their area. And last year the company launched its DryBook tool, an app that helps franchisees keep track of drying and restoration processes and make sure they are following industry standards. 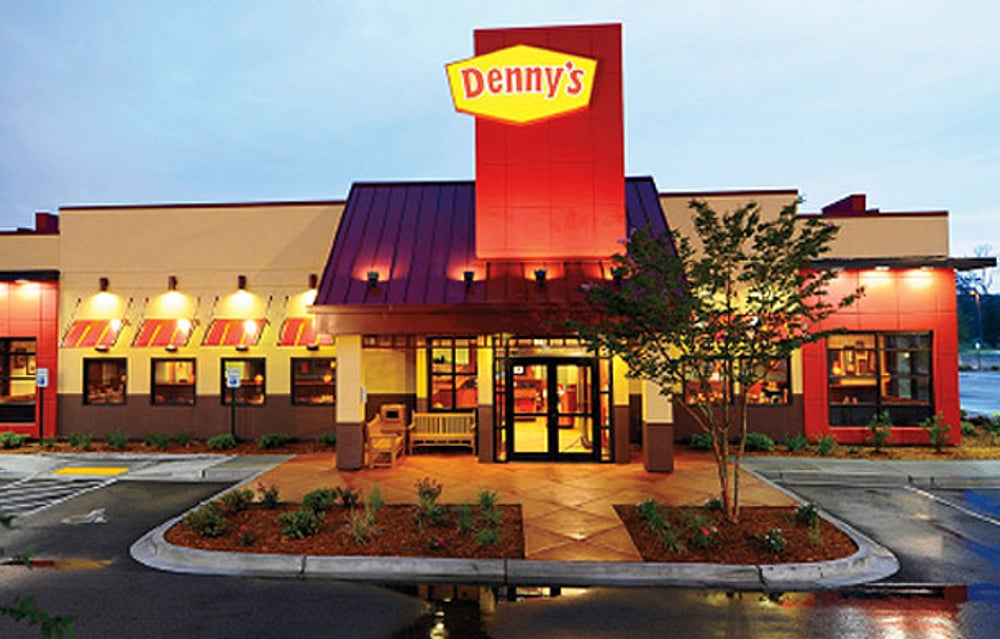 It may call itself "America's diner," but Denny's is well on its way to becoming the hangout of choice for the entire Western Hemisphere. Last year the chain, which has about 1,700 units, made its first move into South America with a restaurant in Santiago, Chile; 10 more are planned for the country over the next 15 years. That adds to units in Canada, New Zealand, the Caribbean, Mexico and Central America.

Back home, Denny's has maintained market share by jumping on the customization trend with promotions for "build your own" omelets and pancakes, and by offering a new slate of coffee blends. In March the company brought back its cult-favorite Baconalia Menu, featuring a maple bacon sundae and caramel-bacon stuffed French toast. While many consumers still think of Denny's for breakfast or late-night meals, the company has revamped its core dinner menu, hoping to attract customers in the evening. It also has enhanced its $2 to $8 value menu, meaning Denny's can be your place of choice whether you have pocket change or really bring home the bacon. 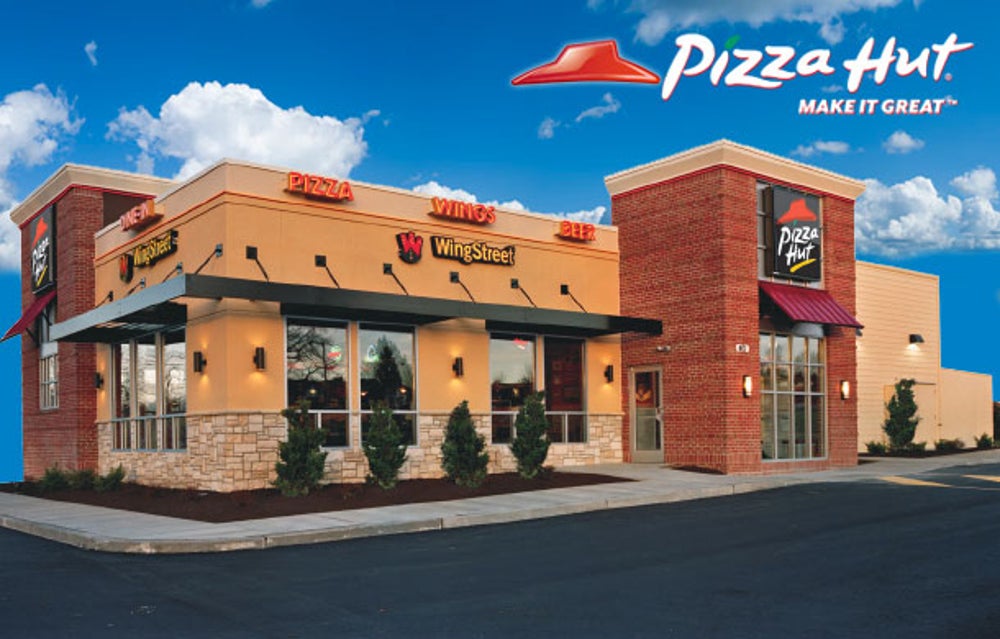 Over the past decade, Pizza Hut has earned a reputation as a mad scientist, stuffing crusts with everything under the sun and flipping, folding and stacking endless pizza patterns. In 2013, its 55th anniversary, the company had its most creative year yet, launching Firebaked-Style Flatbreads, Crazy Cheesy Crust, Big Pizza Sliders and 3-Cheese Stuffed Crust pizzas. It's enough to give a foodie an aneurysm, but the rest of the country--and the world--seems to appreciate the experimentation, which helped the Hut add 125 domestic stores in the past year, bringing its fleet to 8,000 U.S. franchise units (plus 6,700 international and 450 company-owned).

Even more impressive, however, is the company's incorporation of WingStreet, its chicken-wings brand, into 75 percent of its stores, making Pizza Hut not only the world's largest pizza company but the largest wings restaurant in the U.S. It remains to be seen what creations Pizza Hut will come up with in 2014, but revamped mobile and online ordering systems and a partnership with Xbox Live will help get them out to customers even more quickly. 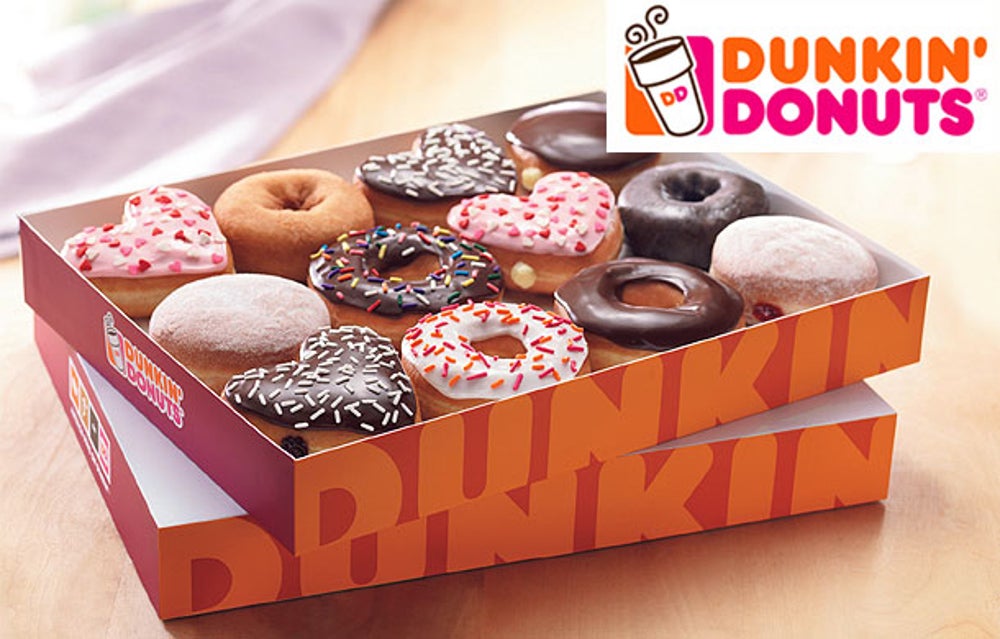 It made its reputation as a haven for morning people, epitomized by the "time to make the donuts" guy. But after more than 60 years in operation, Dunkin' Donuts is promoting itself as appropriate for any time of day and any type of customer, from those looking for a quick sugar or caffeine fix to those who want to relax away from home with a healthful snack. That's reflected in new restaurant designs unveiled last summer that recast Dunkin' as an all-day "third place," ? la Starbucks. The redesign includes more comfortable seating, Wi-Fi and electrical outlets for charging devices, as well as flat-screen TVs and satellite music.

The company hopes the redesign will help it continue its push across the Mississippi, especially as it expands into California, where there may be an opportunity for as many as 1,000 units. At the same time, Dunkin' is continuing to prove itself as an international brand: It has announced plans to open units in Great Britain and Vietnam early this year and is beginning to recruit franchisees in Brazil, Germany, South Africa and Turkey.