The fast-paced evolution of the mobile world is regularly changing the game, and there is an ever expanding library of apps that make life on the road significantly easier and more efficient--and simpler to navigate unfamiliar towns. We've dug up 10 apps that no business traveler should be without. 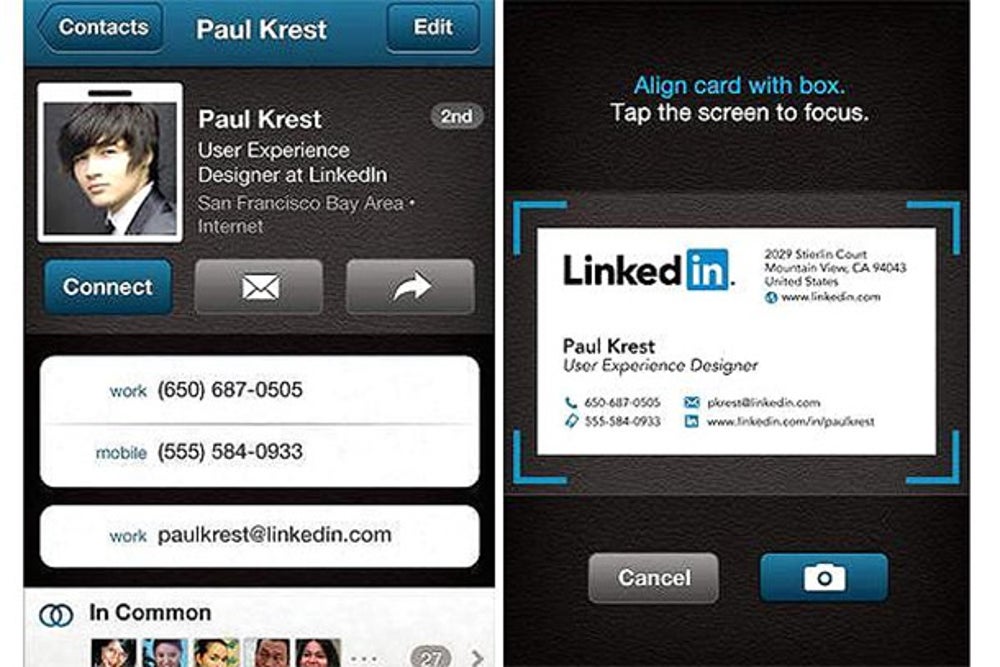 Image credit: CardMunch
Business cards are incredibly handy but far too easy to misplace. CardMunch, available only on iOS, lets you take a picture of the card and instantly creates a mobile contact with the information. And since the app is owned by the business-focused social networking site LinkedIn, it also automatically imports information from the person's account, including common connections and work history.

Talk to me (free) 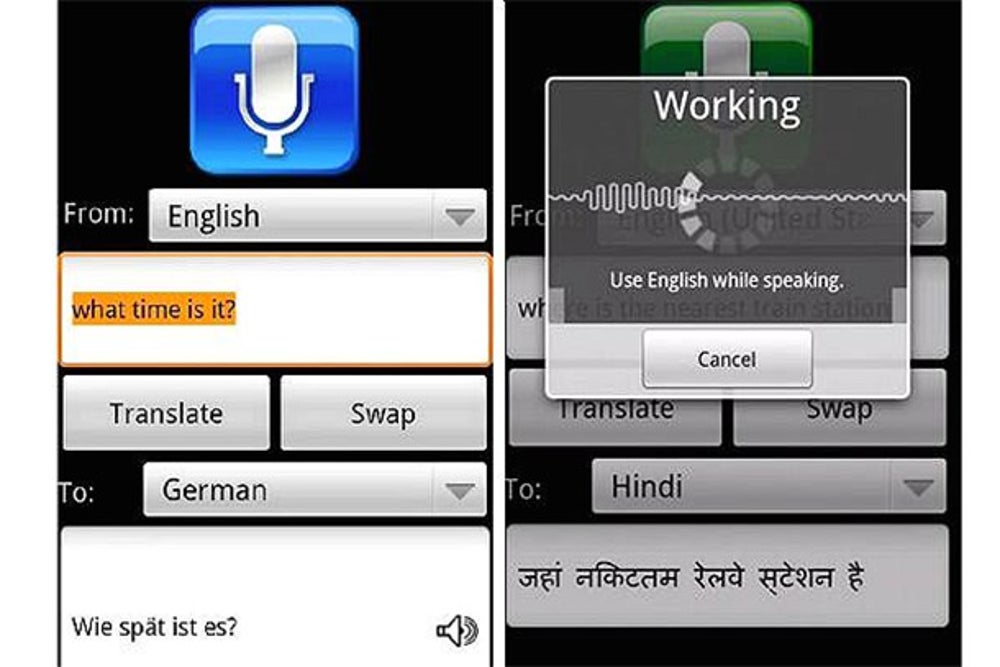 Image credit: Talk to me
This Android-exclusive real-time speech translator, called Talk to me, is an invaluable tool for people traveling overseas. It recognizes 15 spoken languages and outputs voices in more than 30 languages. Simply talk into your phone's microphone, and it will repeat what you said in German, French, Spanish and more. 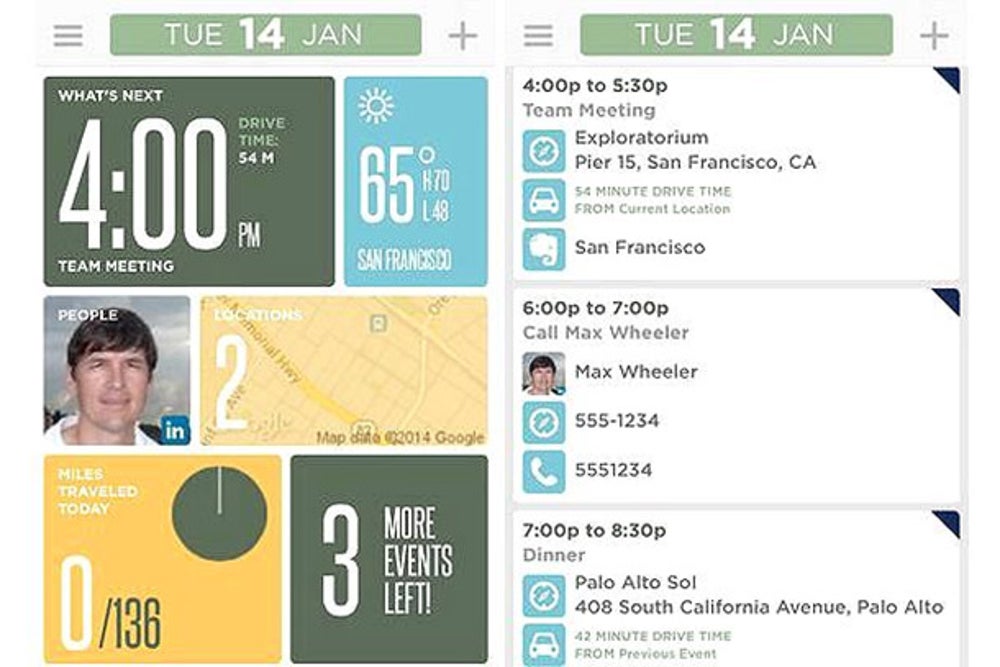 A good calendar program can be a lifesaver as you bounce from meeting to meeting. Mynd, an iOS exclusive, syncs with real-time traffic data, letting you alert other participants if you're running late. (It also tells you what sort of buffer you'll need between meetings in order to be on time.)

It will dial into conference calls for you, letting you bypass entering an access code. And it syncs with EverNote and LinkedIn to learn more about the people you'll be meeting with. 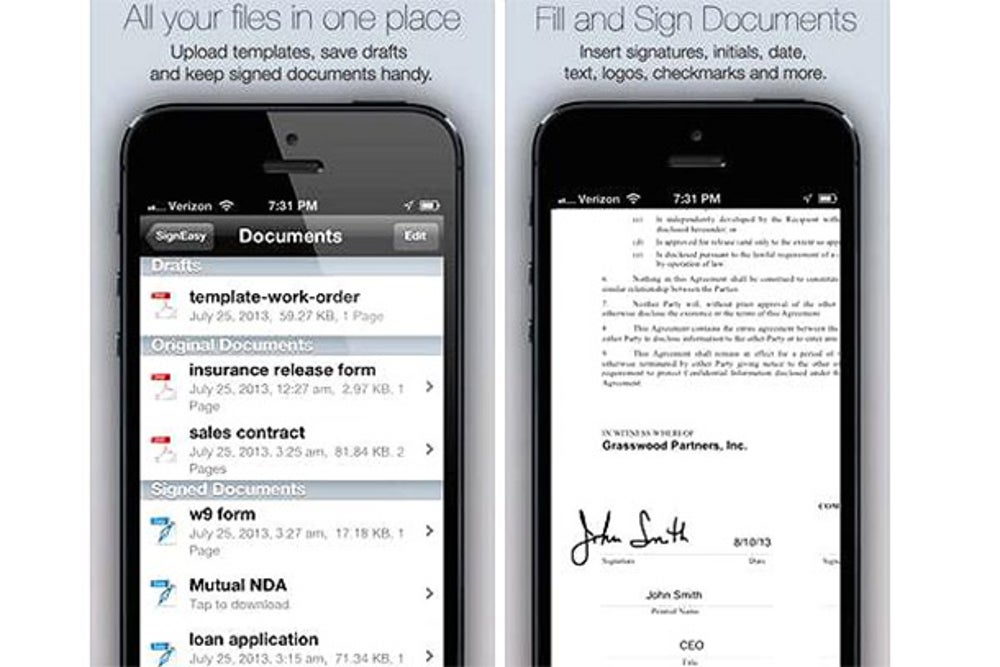 Image credit: SignEasy
Inevitably, when you're on the road, some urgent matter will come up at the home office requiring your signature. Not long ago, this meant detouring to find a fax machine, but SignEasy (available on iOS and Android) eliminates that. With this app, you can sign PDF files and other documents on the go in under 60 seconds. There's a charge per document (ranging from $5 for 10 signatures to $30 for a one-year unlimited subscription), but the time you save may be worth much more. 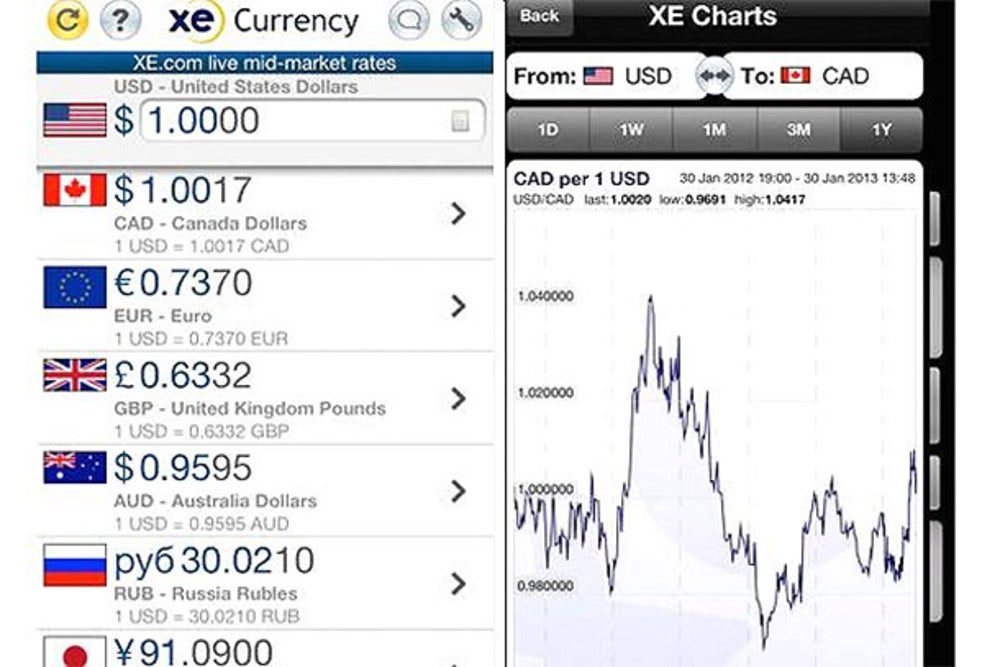 Image credit: XECurrency
If your business travels take you to several countries,XE Currency's foreign-exchange app helps you track currency conversion rates and even stores the most recent rates, in case you find yourself in a no-coverage zone. Available for iOS and Android, it comes in an ad-supported free version as well as an ad-free premium version (which also monitors twice as many currencies). 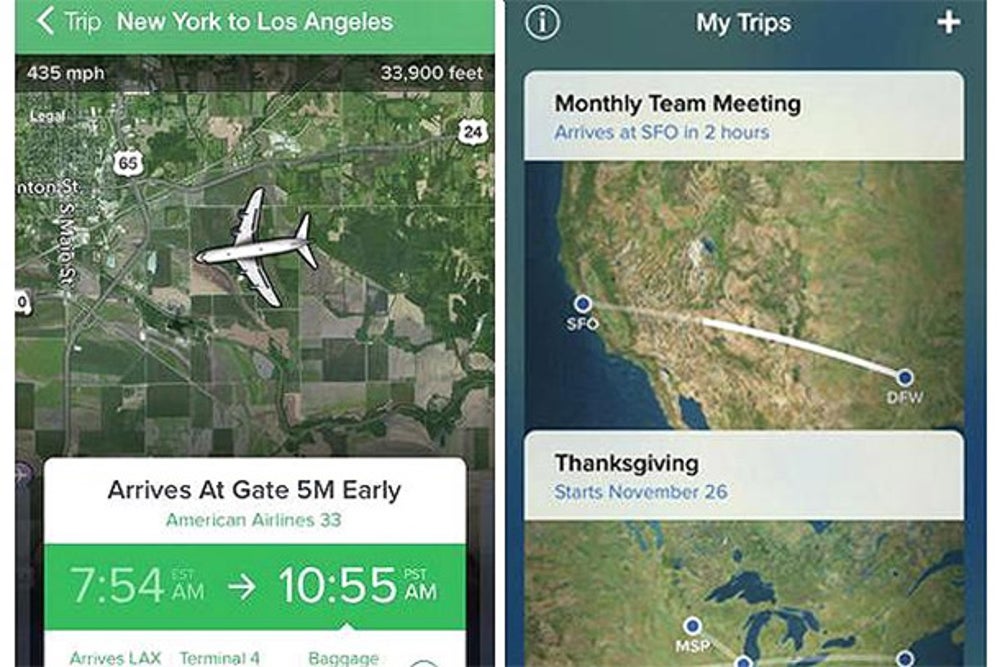 Flight delays are the bane of the road warrior's existence. While there are many apps keeping an eye on the departure and arrival times of planes, none do it better than FlightTrack, available for iOS and Android.

You'll get the usual real-time departure info, delays and gate numbers here, but you'll also get predictions of delays, zoomable live-flight maps and real-time status updates for more than 3,000 airports and 1,400 airlines. And if your flight is canceled, it will suggest alternates for you. 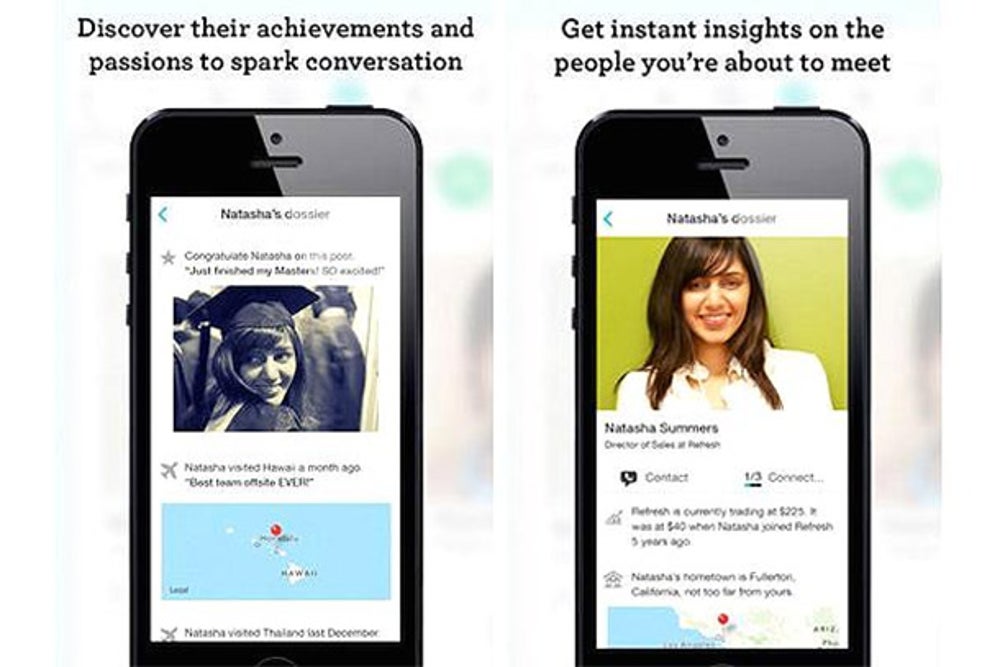 As you cycle through endless meetings, it helps to have a cheat sheet to know more about (and sometimes simply remember) the people you'll be talking with. Refresh builds a dossier on people you interact with, gathering their public social media posts and arming you with data that can help forge a connection quickly.

Integration with Evernote lets you add personal notes as well, once you've met. It's on iOS, and an Android version is forthcoming--though if you've got Google Glass, there's an app available for that already. 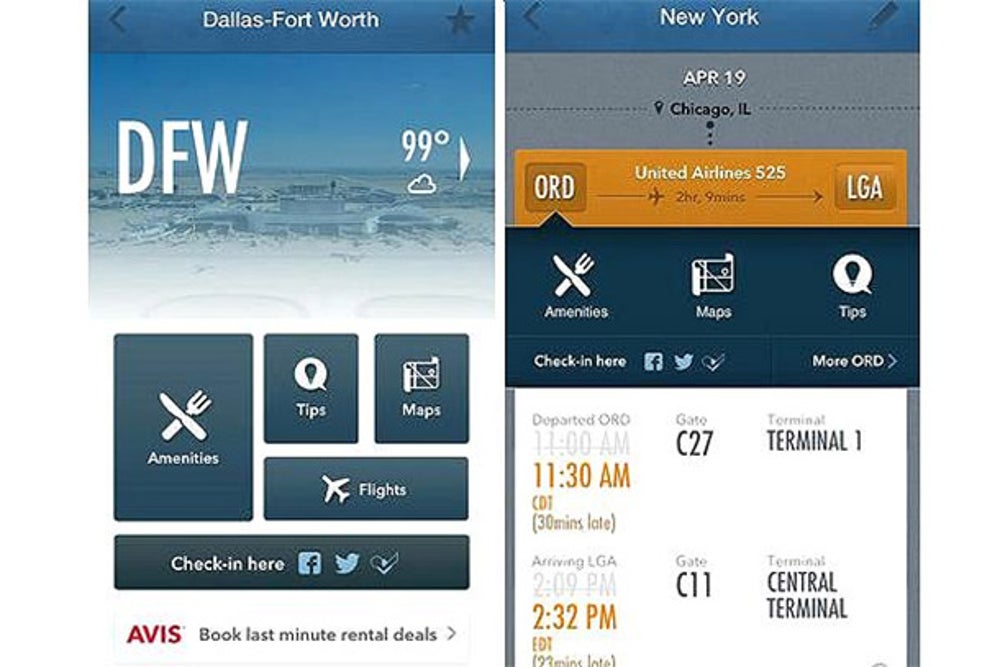 Layovers can be a major travel headache. You often don't know the layout of the airport--and if you're stuck there for any length of time, it can get pretty boring.GateGuru, available for iOS and Android, can ease some of that pain, offering detailed maps of all the major airports and terminals, as well as a review of dining options. 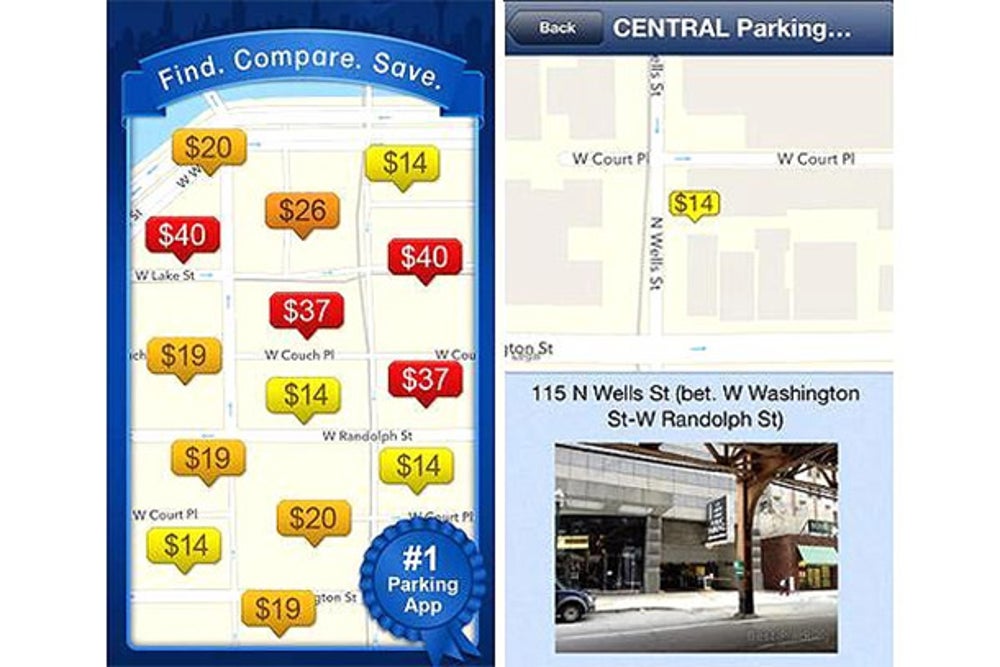 Whether you're in your own town or an unfamiliar city, finding parking is often a challenge. BestParking(available for iOS and Android devices) steers you to convenient parking in 100 cities and 115 airports, not only finding you the lot closest to your destination but also letting you know what you can expect to pay.

BestParking also offers coupon discounts at some lots and is so focused on having the most current information that it offers a $5 Starbucks eGift card to users who report errors. 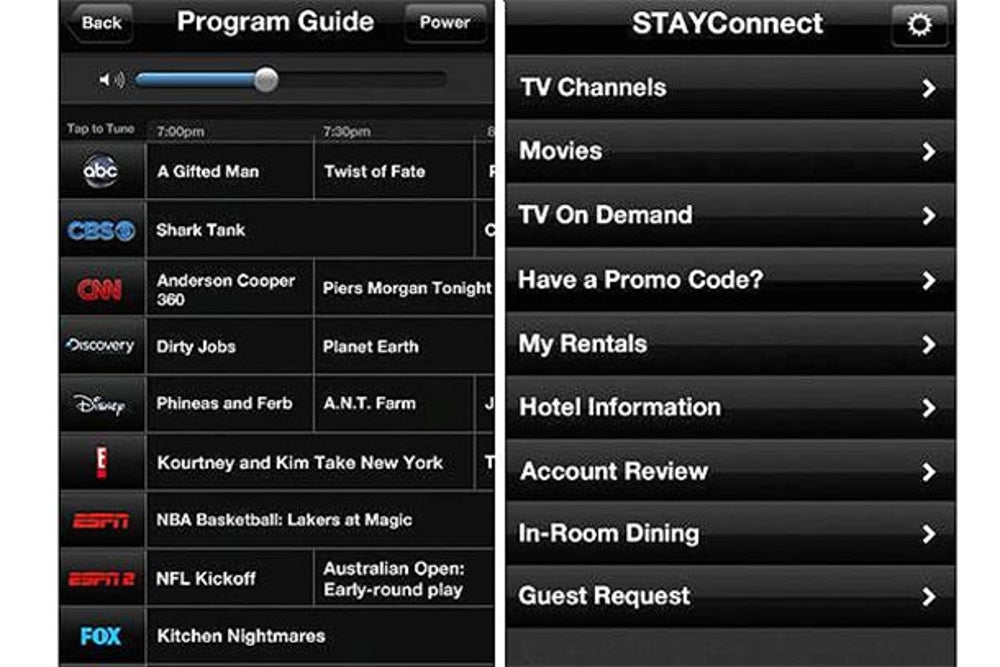 Even the most ardent road warrior likes to hide out in his or her hotel from time to time. But navigating the channels with the always frustrating in-room remote controls can be maddening. LodgeNet, the TV service many hotels use, is offering an alternative withSTAYConnect (for both iOS and Android).

Travelers can use their smartphones to control the TV, get a program listing and even order in-room movies at more than 630,000 hotel rooms around the country.

5 Ways to Travel the World and Work Remotely From 5-Star Hotels, Luxury Resorts and Vacation Homes This Year

Save More Than $2,500 on a Five-Night Maldives Vacation for Two at Travelzoo