From the Sustainable to the Flexible to the Edible, We Explore the Possibilities of 3-D Printing

Additive manufacturing--more commonly known as 3-D printing--is not just for geeks anymore. A variety of options are making this process accessible to everyone, and what can be created has gone way beyond plastic tchotchkes. Whether sustainable, flexible or edible, made of ceramic, metal, fabric or sugar, products made using the technology open up countless opportunities for designers and new types of businesses. It's easier than ever to get your product from idea to finished item, or to promote your business with a uniquely branded object you've created yourself. 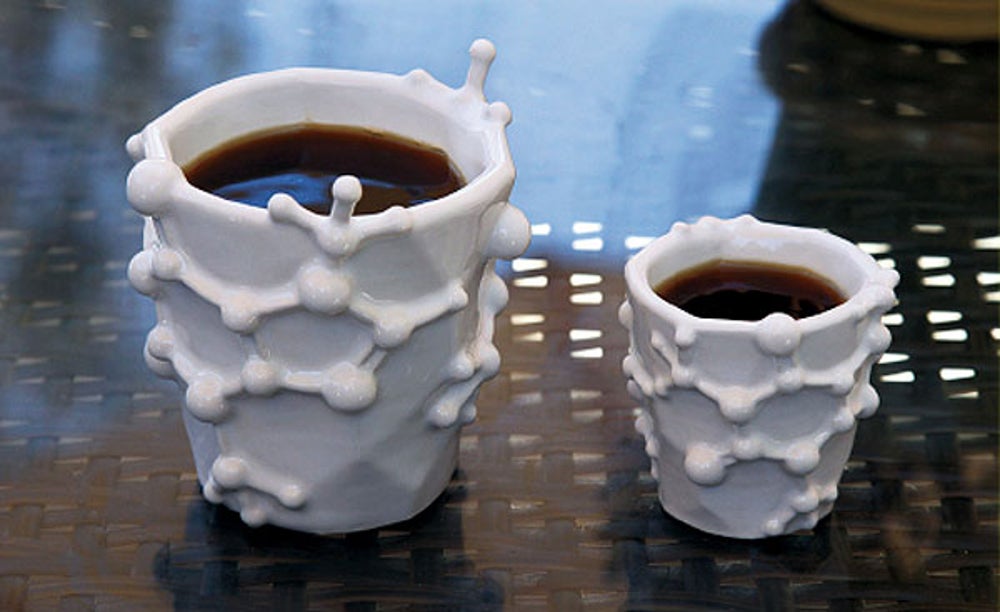 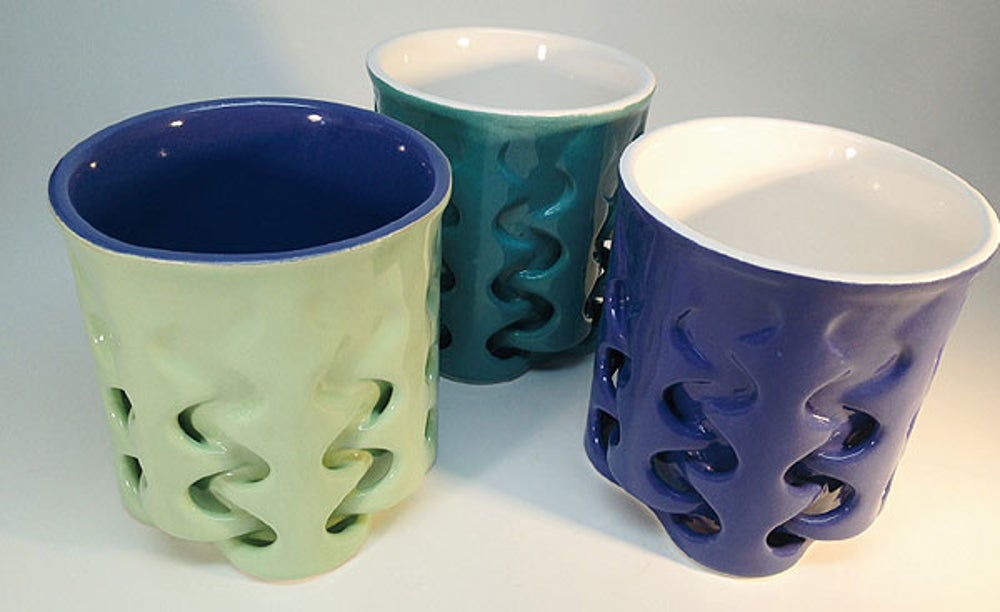 Meanwhile, the CeraJet printer from Rock Hill, S.C.-based 3D Systems (expected to retail for less than $10,000 when it goes on sale this year) will give consumers and small businesses the ability to sell larger quantities of complex ceramic designs, such as these cups. 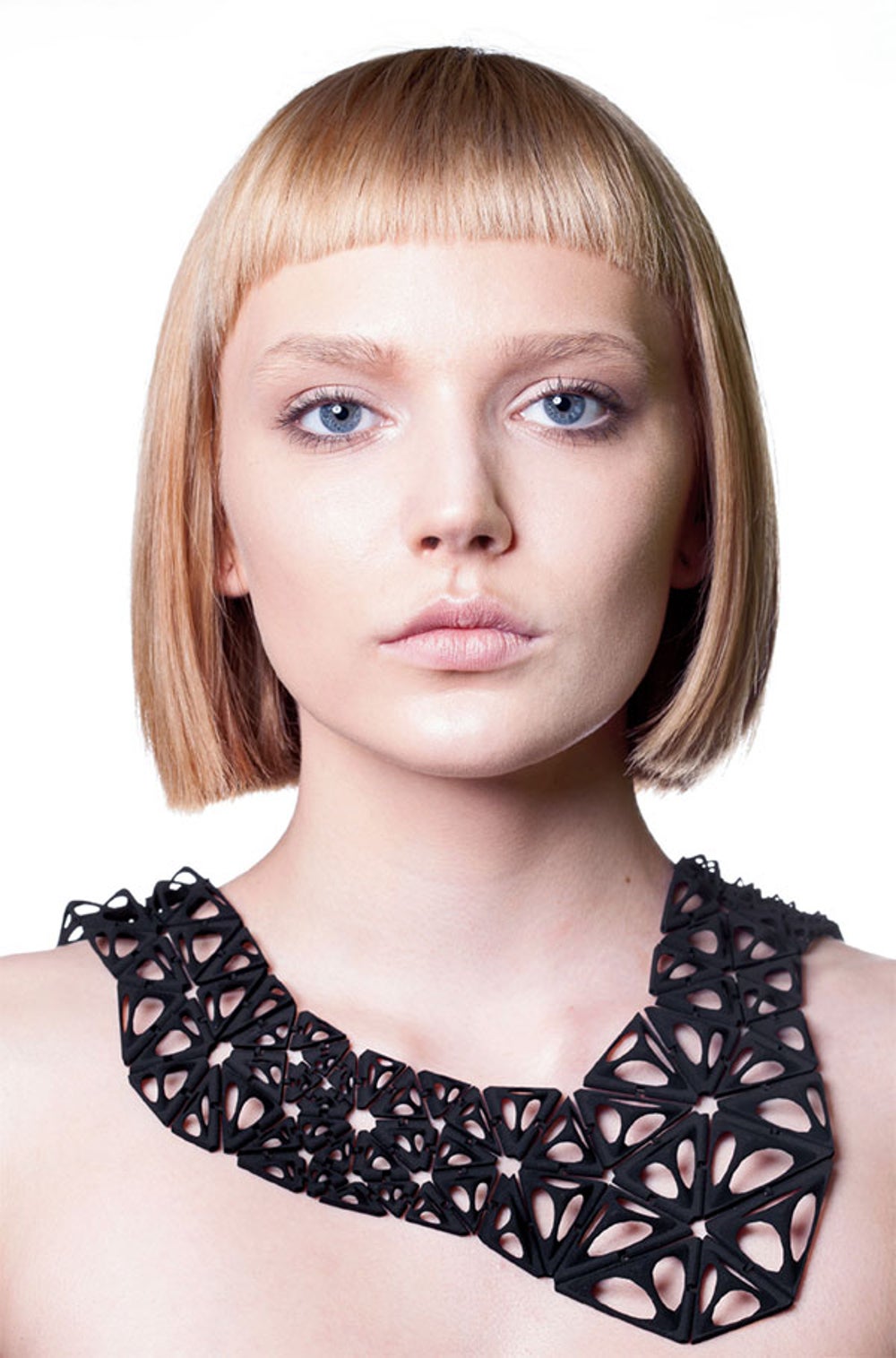 Image credit: Photo © Jessica Weiser/Nervous System
3-D printing with fluidity--that's what Nervous System, a Somerville, Mass.-based design studio, has created with its Kinematics technology. In fact, Kinematics, which creates complex forms by combining smaller structures, could more accurately be called 4-D printing; the system's ability to compress a design via folding allows a printer to produce an item larger than itself. You can design a nylon necklace and buy it directly from Nervous System's site, or you can use the free Kinematics app to create designs that can be printed with any 3-D printer. 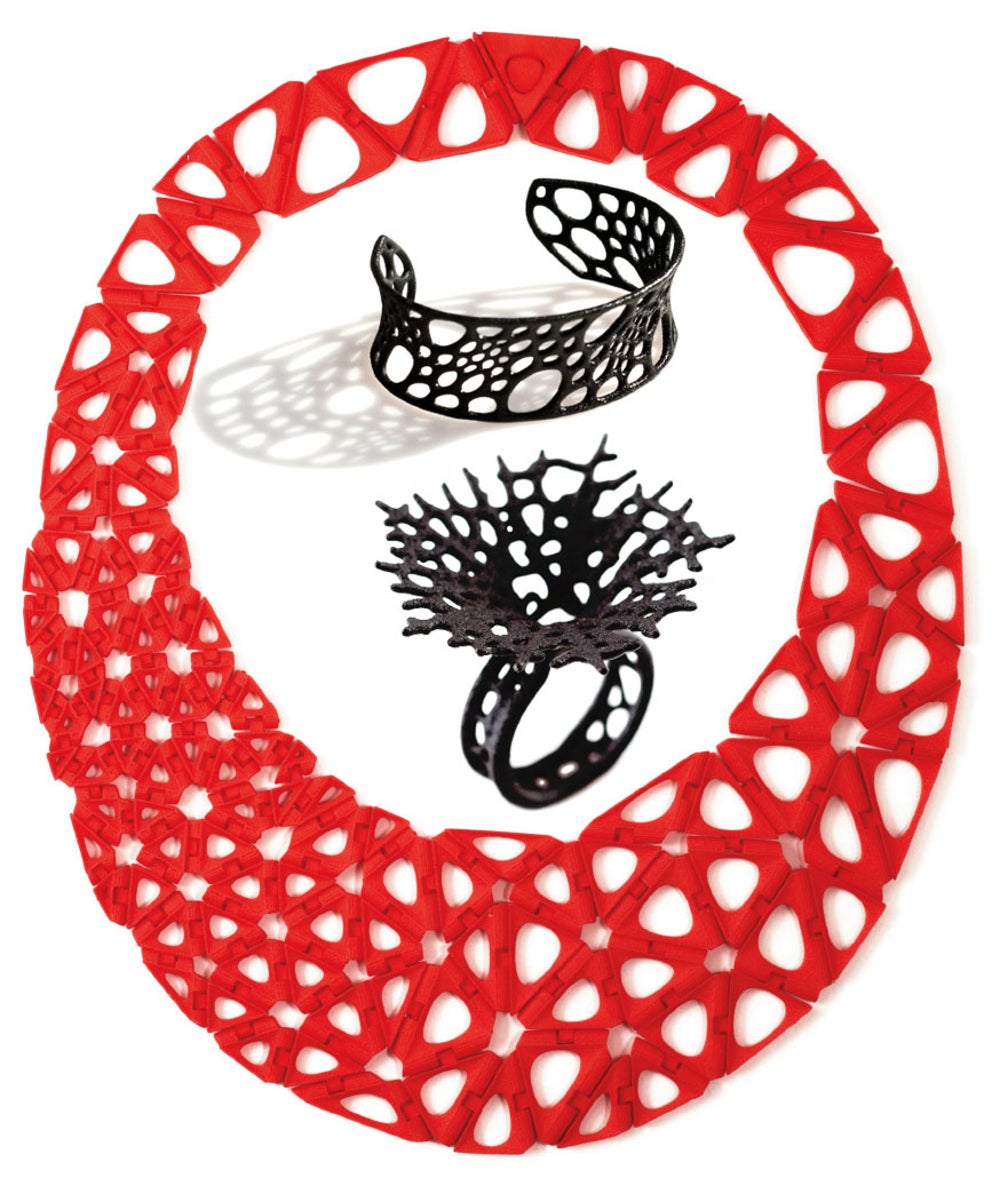 Image credit: Photo © Jessica Rosenkrantz/Nervous System
Nervous System continues to explore the possibilities of Kinematics; the ability to scan customers and fit garments precisely to them is one possible application of the system. 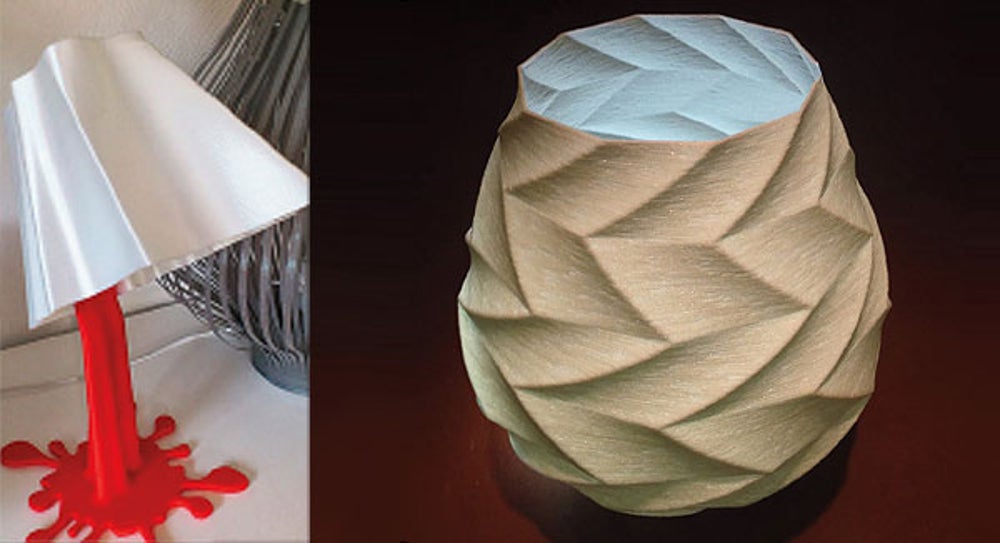 New materials like bioFila from German company twoBEars can be used in standard 3-D printers to create products with cloth-like textures that are made from sustainable sources.

3-D printers are invading the kitchen 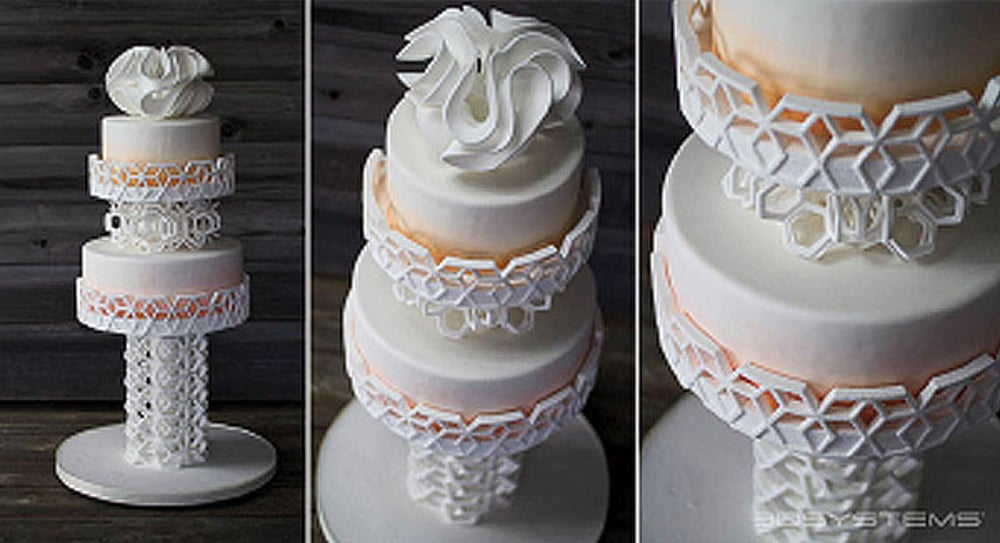 3-D printers are invading the kitchen, affording greater precision and automation than human hands can provide. 3D Systems' ChefJet (expected to be priced at less than $5,000 when it goes on sale later this year) can print monochromatic items such as wedding-cake stands and decorations; the ChefJetPro (less than $10,000) can print larger items in multiple colors, such as intricate sugar flowers. Cartridges for both come in a wide variety of flavors. This is no way to whip up a quick treat, however--two vertical inches take about an hour to print. 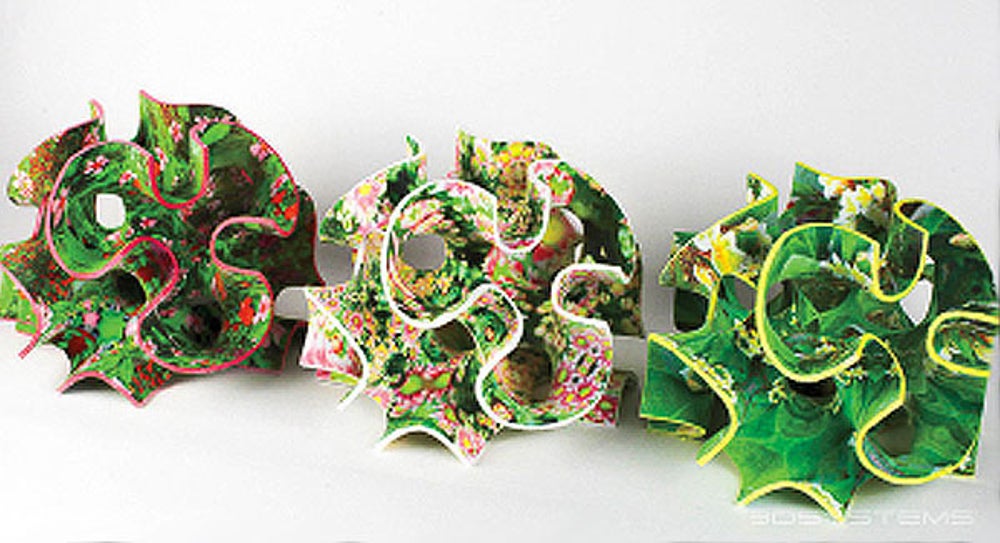 If you simply want a taste, 3D Systems' Cubify marketplace is selling printed products such as rainbow-colored, apple-flavored sour candies in an array of complicated shapes.

This technology has already had business applications; Ford used a ChefJet prototype to print limited-edition chocolate cars to promote the launch of the 2015 Mustang. 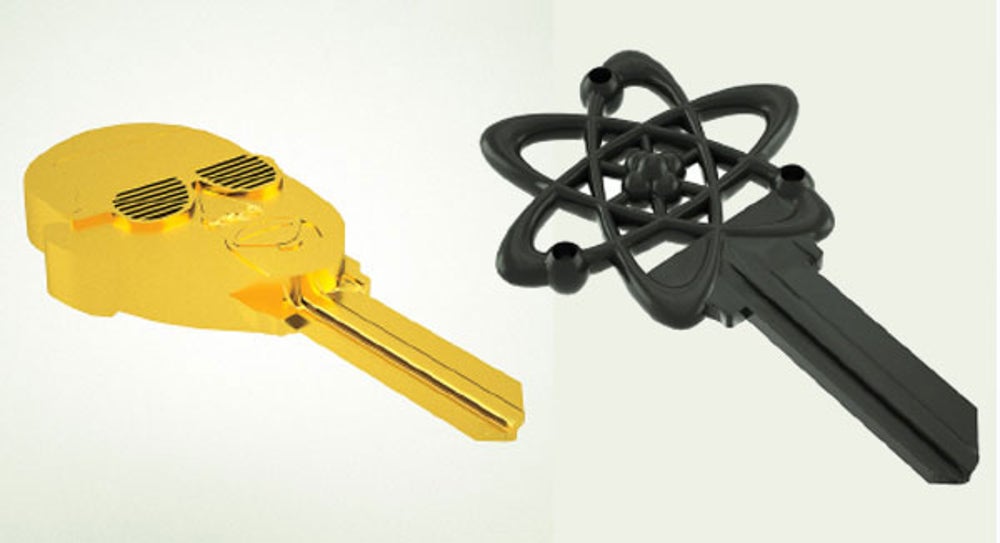 New York City-based cloud storage system KeyMe has partnered with Shapeways to enable customers to print keys in a variety of materials. The ability to customize the color and materials and to include logos provides branding opportunities for real-estate and other professionals.
More from Entrepreneur

Emerging Markets Are the Next Frontier of 3D Printing

How 3-D Printing Will Improve Our Future

This 3-D Printed Home Can Withstand an 8.0 Earthquake

Check Out Björk's Amazing, Creative and Freaky Use of 3-D Printing