What Happens When You Ask Fifth Graders to Solve a Big Life Problem? A Little Bit of Genius.

Laura Entis
May 19, 2015 5 min read
Opinions expressed by Entrepreneur contributors are their own.

It's just before 9 a.m. near the start of the day at P.S. 307, an elementary school in Brooklyn's rapidly gentrifying DUMBO neighborhood. Located across from a public housing project, P.S. 307 is mere blocks away from Brooklyn's burgeoning tech scene, where companies like Etsy, Kickstarter and Makerbot are headquartered.

The clock strikes the hour and, on cue, around 60 fifth graders stream into the school's sunny auditorium. It's Friday, May 8, the culmination of Big Idea Week, during which mentors from local tech companies collaborate with elementary schools in Brooklyn and Queens to teach students about entrepreneurship, STEM and 21st-century careers. For the last four days, the fifth graders at P.S. 307 have worked with mentors from Etsy, Facebook, ScriptEd and Flocabulary to develop their own 'Big Ideas.'

It's finally show time: they're ready to pitch their big ideas to the world (or, at least, a cluster of parents, teachers and classmates).

Related: Why 'Gen Z' May Be More Entrepreneurial Than 'Gen Y'

The prompt for Big Idea Week was broad: Think of a problem in your community, in your city or in the world. The problems the students have set about solving run the gamut, from everyday annoyances to heartbreakingly big issues. In groups of three and four, the students get up in front of the room and, with the help of projected slides featuring hand drawn diagram of their solution, launch into how their product solves the problem they've selected.

One group presents an alarm clock that doubles as a piggy bank; each time a kid hits the snooze button, coins are deposited into a locked compartment. Two groups have serendipitously settled on the same problem (shoulder pain caused by heavy backpacks) and the same solution (a bag equipped with built-in massagers).

And then there are the more serious solutions, such as a wearable device for people with diabetes that monitors glucose levels, an app-based service that delivers prescription medications to the elderly and a bear that speaks in the pre-recorded voice of a child's parents in case, for whatever reason, they are no longer able to tuck them in at night.

"What we saw across the board is that these kids are identifying problems that the tech community is not generally thinking about," says Alex Rappaport, co-founder and CEO of the Brooklyn-based education company Flocabulary, which started Big Idea Week in partnership with The Dumbo Improvement District in 2013.

Related: How These Entrepreneurs Found a Catchy Way to Teach Students Financial Literacy

Initially, the idea was to deepen the curriculum by allowing kids to come up with a solution to a problem, utilizing critical thinking, collaborative problem solving and public speaking in the process, while exposing them to untraditional career paths in the tech industry. But Rappaport says he's come to realize that the tech industry, with its oft-discussed diversity problem, has a lot to gain from programs like this. There's a stark difference between the problems he sees the kids addressing and the buzzy apps that are receiving generous funding in Silicon Valley.

"Take Minibar, which is an app that delivers booze to your house," he says. "That's not solving problems in this community. Tech has been criticized for making products for wealthy people and I think if we can inspire these kids to be engineers and designers, they are going to bring a whole new perspective to technology." Tom Takigayama is a product designer at Etsy. He worked with the kids most of Wednesday and Thursday morning, posing questions to each group to help them refine a strategy for solving their chosen problem. "'A lot of children were like, oh we'll just use technology,'" he says." My job was to encourage them to ask, what kind of technology should we use?  Bluetooth? Or we could build an app? It was getting them to think a little deeper."

For Takigayama, the most important aspect of the experience was showing students that they can grow up to become professional problem solvers. As a kid, "I didn't know that design was an actual job description; it was lawyer, doctor," he says. "I wanted them to know that there are a bunch of problems out there that they can solve. Whether they become an entrepreneur and solve it themselves or whether they work for companies who are solving these problems, there are a lot of different ways to go about it."

One student asked him if she could work at Etsy. "I said, absolutely! But I think you have to be 18."

Here are five groups' ideas for products and services that solve problems in their everyday lives. 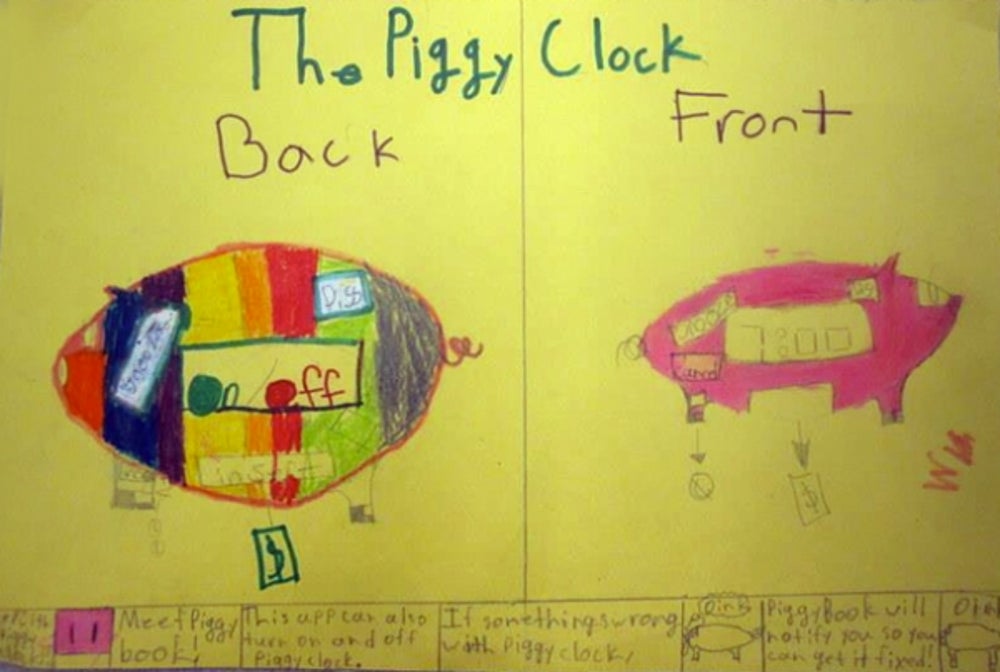 The Solution: An alarm clock that doubles as a piggy bank; every time a kid hits the snooze button, coins are deposited into a locked compartment. 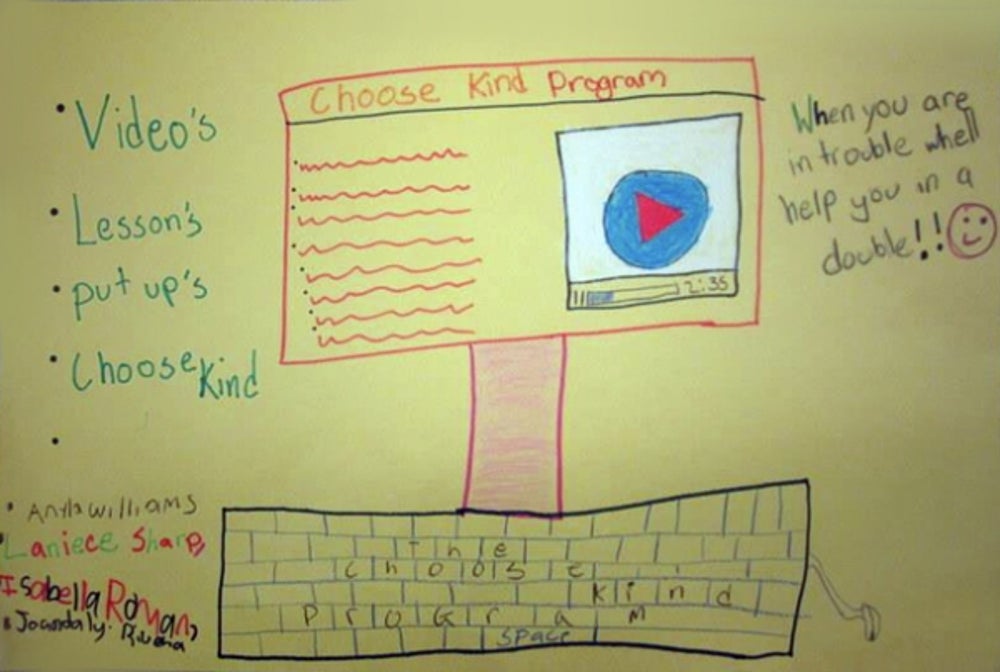 The Problem: "Children get bullied."

The Solution: An online database of videos, tutorials and testimonials from teachers, guidance counselors and students about how to handle bullying. 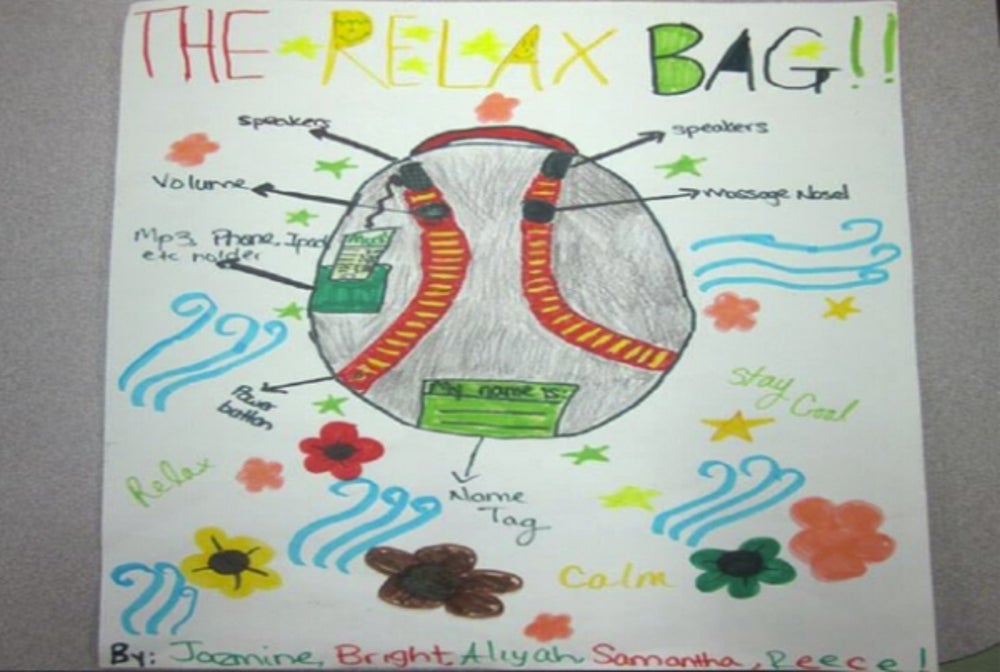 The Problem: "Heavy book bags lead to back pain."

The Solution: A backpack with embedded massagers, powered by a solar panel sewn on the bag's exterior pocket. 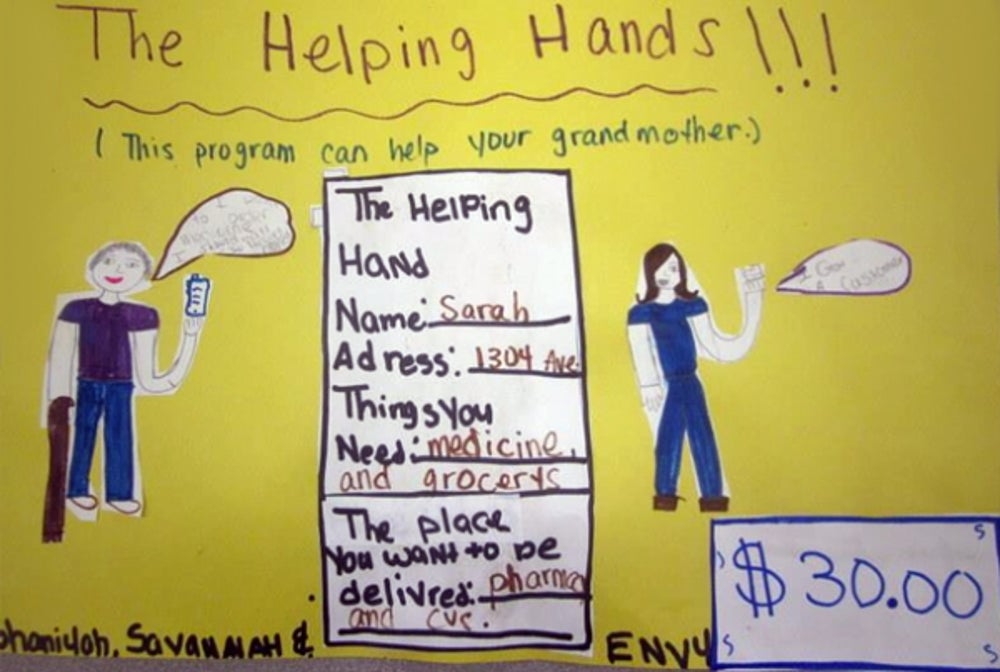 The Problem: "Elderly people have a hard time picking up their prescriptions."

The Solution: An app that delivers prescription medication, via courier, to the elderly. 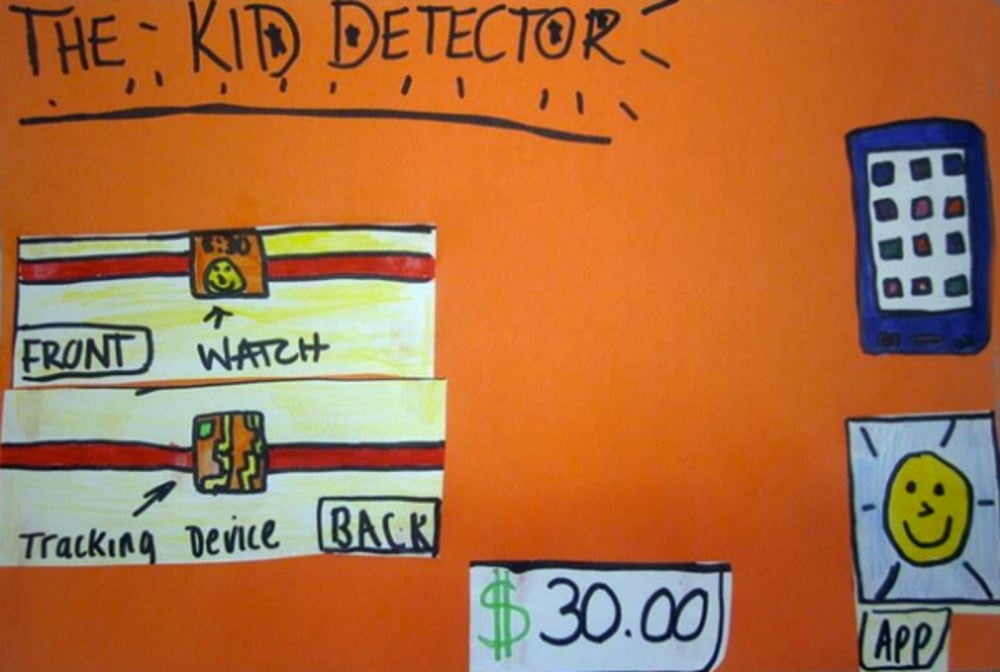 The Problem: "Too many children get lost/and or abducted every day."

The Solution: A watch with a tracking device that allows parents to keep tabs on their children's coordinates.

Successful Leaders Know They Can Learn From Everyone at Their Company

What's The Value of An Idea?