These Are the Coolest Cars You'll Never Drive


Our ability to drive innovation through creative visualization has helped us explore the reaches of space, put powerful computers into our pockets and design some bad-ass car concepts. There's always been a seed of futurism in automobiles: Manufacturers and hobbyists alike have been crafting unique vehicles for decades, sometimes to test out fresh, new tech and other times to indulge in space-age fantasies. Below, we explore some of the more notable concept cars that have been created over the years, from the utilitarian to the fantastic.

Famed inventor and architect Buckminster Fuller added a car to his "Dymaxion" line of life-improving designs in 1933. It was a teardrop-shaped concept vehicle that seated 11 people, got 30 miles to the gallon and was tested at up to 90MPH. The three-wheel design also gave it an incredible turning radius. 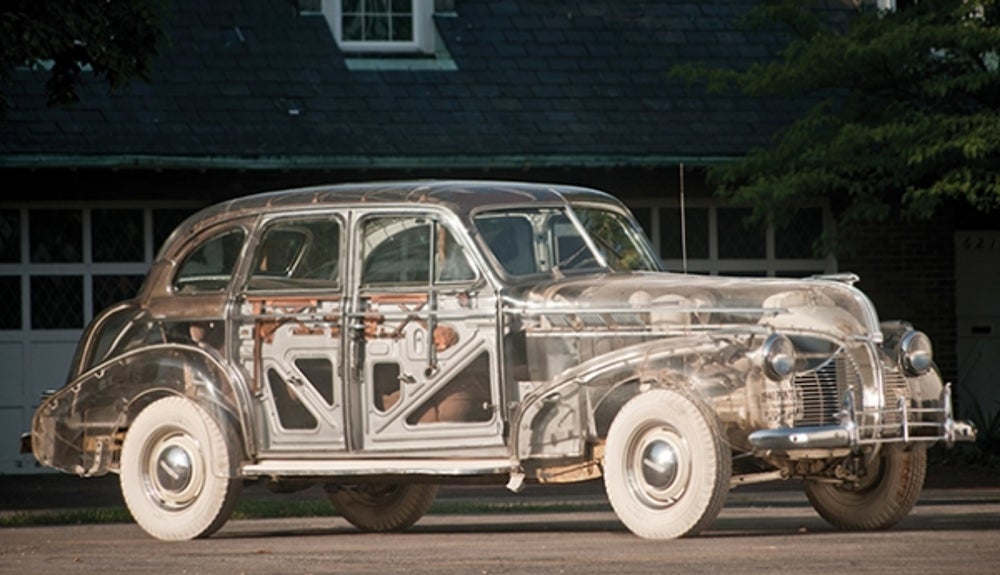 Image credit: Aaron Summerfield | RM Auctions
General Motors had a unique vehicle design on display at its "Highways and Horizons" pavilion at the 1939-40 World's Fair. A 1939 Pontiac Deluxe Six was customized in collaboration with the Rohm & Haas chemical company, which had developed a new material called Plexiglas. Dubbed the "Ghost Car," this vehicle was sheathed in the clear material and included a chromed dashboard and white tires to round out the spooky design

The sleek 1938 Phantom Corsair concept designed by Rust Heinz had push-button operated doors (without handles) and supposedly seated six. It never went into production and the single prototype is the only one ever made. 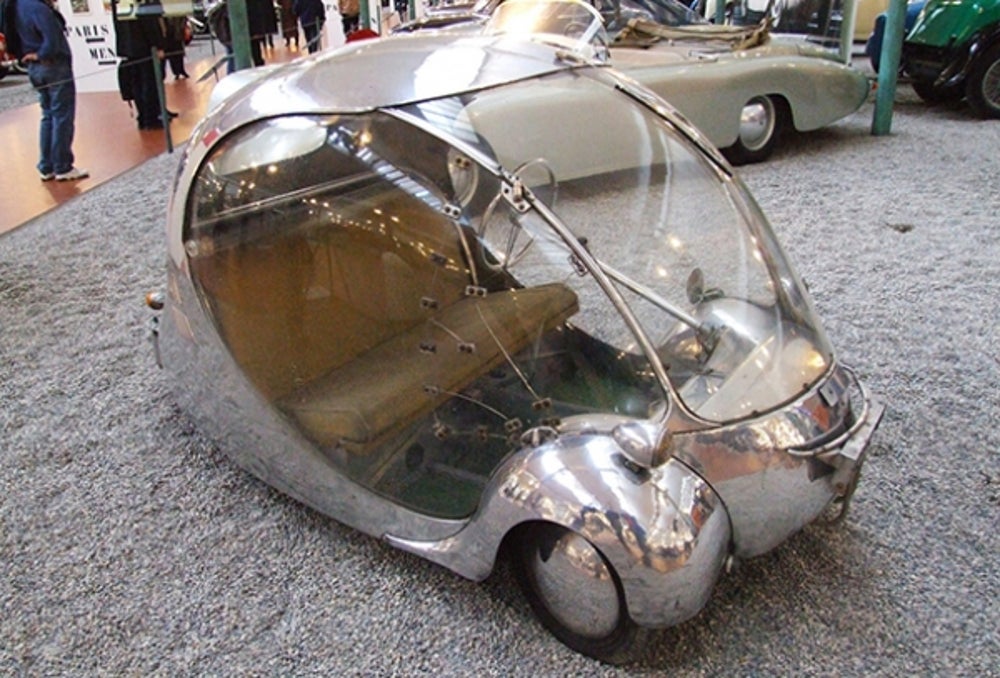 Image credit: Claus Ableiter | Wikimedia
The L'Oeuf Electrique or Electric Egg was designed by Paul Arzens, who studied art before turning to automobile engineering in his 30s. This three-wheeled, battery-powered vehicle was first displayed in 1942. It could seat two, had a range of about 63 miles and a top speed of about 40MPH, depending on the number of passengers.

Following WWII and enamored with aviation, car designer Gordon Buehrig created the 1948 TASCO prototype during a stint with The American Sports Car Company. It included his soon-to-be patented removable T-top design. You can head over to YouTube for a closer look of this unique concept.

Image credit: GM Heritage Center
Following the first 1953 Firebird, which looked more like a missile than a car, GM built the second iteration to be a bit more family-friendly. Launched in 1956, the Firebird II was a gas-turbine-powered concept with a titanium body, power disc brakes, a magnetic ignition key and individually controlled air conditioning.

Image credit: GM Heritage Center
In 1958, GM developed the third in its "Motorama Firebird" series. This version looked to be more spaceship than street cruiser, but some of its innovations were carried over into production models. It was a rebellious style with few parallel lines and far less chrome than was normal at the time. A uni-control steering joystick also replaced the traditional steering wheel, shift lever, brake and throttle.

This nuclear-powered vehicle never made it past the model phase. The rear of the car was designed to include a uranium fission reactor meant to power the vehicle's steam engine, similar to the function of nuclear submarines.

The 1959 Cadillac Cyclone, one of the last cars designed by Harley Earl, borrowed some of the Firebird line's visual style. The concept included a single bubble-top canopy and a radar-based crash-avoidance system that was mounted in the "nose cones." 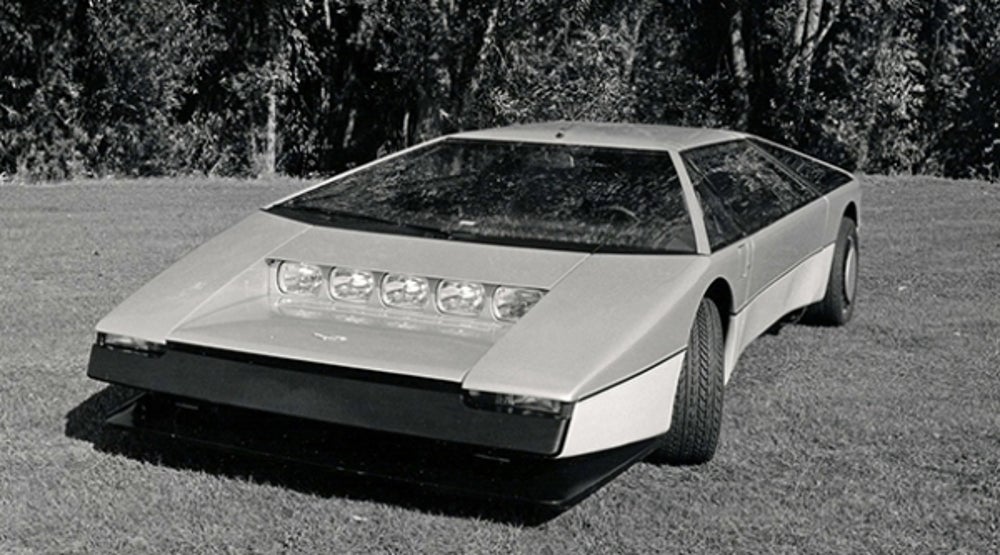 This drivable concept was unveiled in 1980 and developed to demonstrate the ability of Aston Martin's factory to produce a "supercar for the '80s." Its wedge shape was influenced by the Aston Martin Lagonda. That Blade Runner-esque shape and 5.3 liter V8 helped it reach speeds in excess of 200MPH. A motorized panel could be lowered to reveal an array of lights when streamlining wasn't as essential.

Don't let the name fool you, this unique concept wasn't born in Japan; it was developed by VW's Italdesign studio in Italy. The design and name were a mashup of machina and motociclo (car and motorcycle, respectively in Italian). It was loosely based on a Volkswagen Golf GTI. Riders would sit in rows atop motorcycle-styled sets (each with their own handle for stability). The driver could use its steering wheel in the round, or flip out two handles for the full biking experience.

In 1989, Plymouth unveiled the Voyager 3 concept vehicle. This extended people carrier had characteristics similar to a tractor-trailer. When you didn't need to haul the soccer team around town, you could remove the back portion and cruise around in the forward cab. 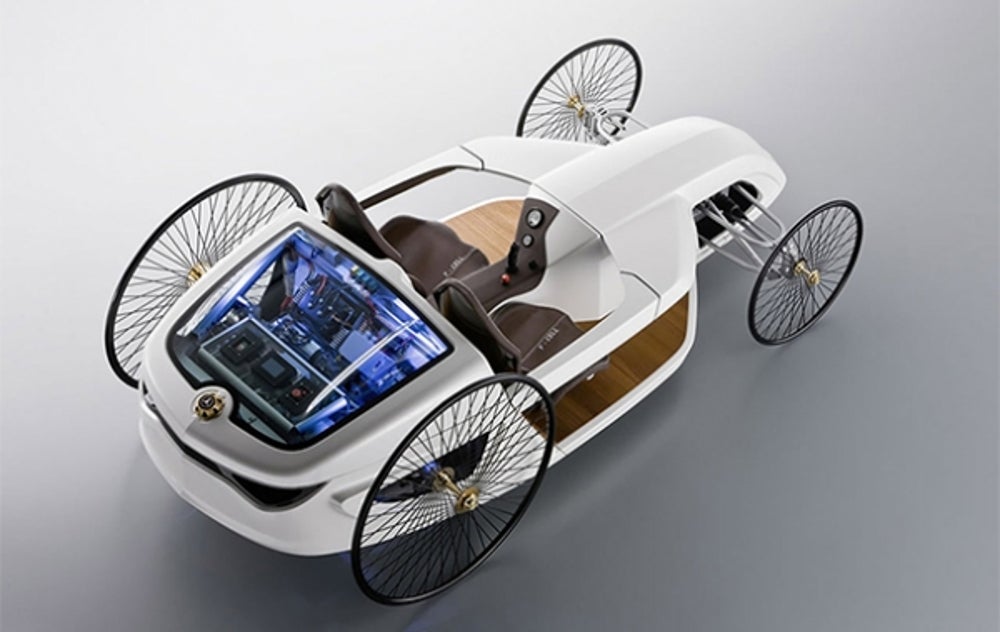 Image credit: Benz Patent Motor Car
Daimler revealed its F-Cell Roadster concept in 2009, which culled design flourishes from several eras in automobile manufacture. Its most functional feature was a 1.2kW hybrid drive, allowing a top speed of only 15MPH, but with a range of 217 miles. The fiberglass front and seating were both influenced by Formula One racing, while many other touches reference a classic Benz Patent Motor Car design. 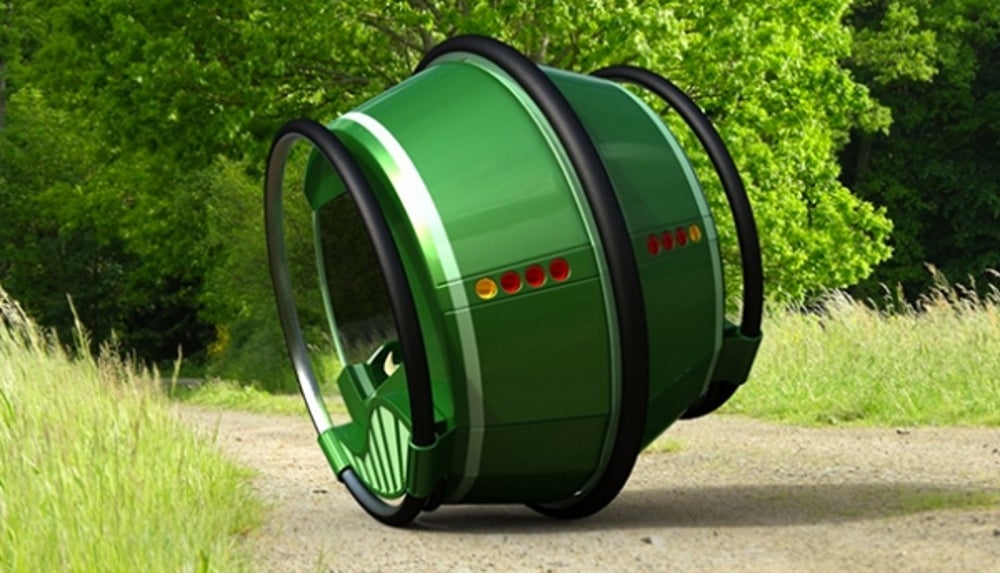 Image credit: Mohammed Ghezel
The 2009 eRinGo concept falls somewhere just outside the limits of both motorcycle and automobile. It was a three-wheeled, two-seat design that would balance on a single tread or utilize two extra wheels on either side for stability on turns. 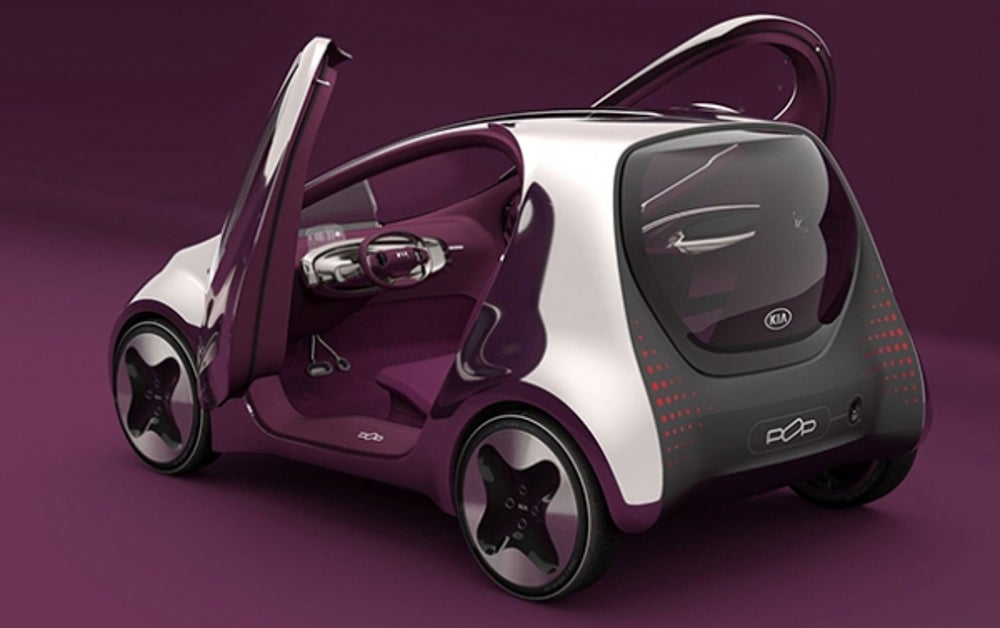 Image credit: Kia's 2012 Pop
Eco-friendly design in a cute, chromed package? Yep, Kia's 2012 Pop electric concept was making a run at the future with OLED panels, an illuminated grille and zero emissions (at the tailpipe, at least). The lithium-polymer gel battery provided a top speed of 87MPH, a range of 100 miles and required up to six hours of charging time (or 30 minutes on a high-voltage supply). 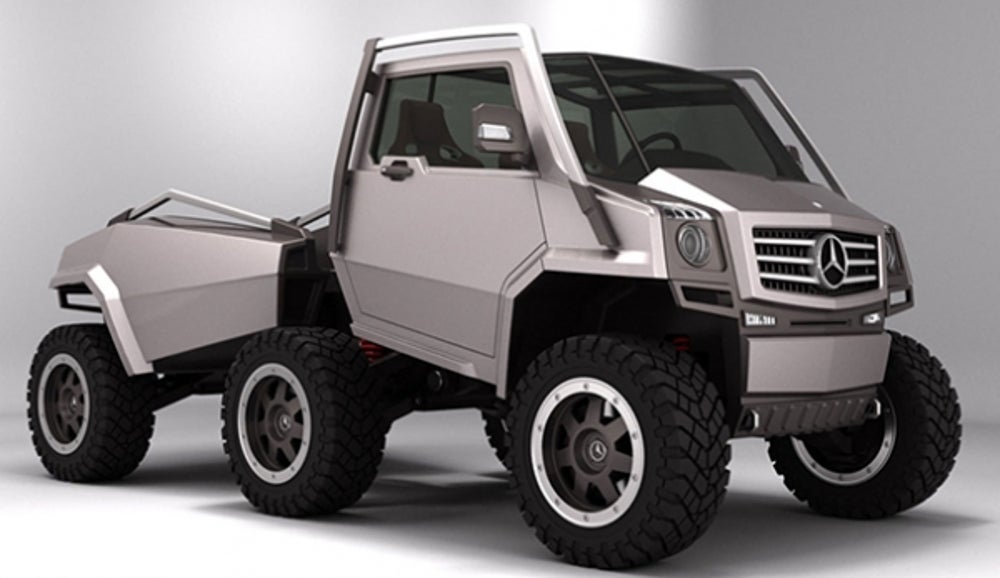 Toyota showed off its Fun Vii at the 2011 Tokyo Motor Show. At the time, it was a purely non-functioning concept and didn't even implement the OLED display panels it was pitching for its infinitely customizable exterior.

Another offshoot of MIT's urban research was the CityCar concept. Designed with support from GM (like the 2004 Smart Cities program), this car was made to be folded and stowed like shopping carts at a grocery store.

In 2012, a Basque consortium named Hiriko Driving Mobility ran with the idea and produced a short run of Hiriko folding cars based on the design.

NASA, never one to be left out of the race for the future and a group most likely to implement it, unveiled its own forward-thinking car in 2014. The Modular Robotic Vehicle (MRV) was created at the Johnson Space Center and just like the 2004 SOFT Car concept, this model tested the functionality of independently powered wheels and a drive-by-wire system. 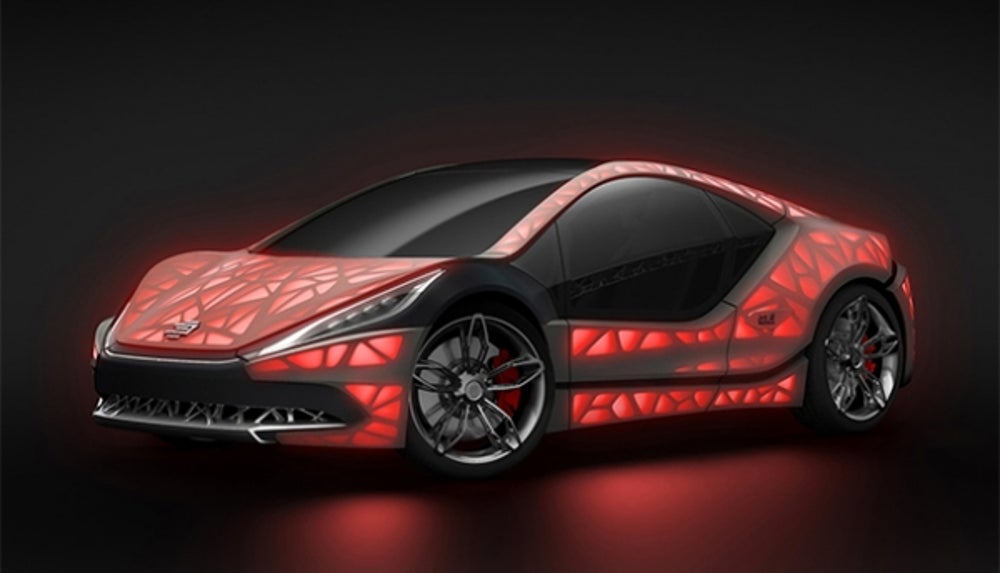 The EDAG Light Cocoon concept went on display at the 2015 Geneva Motor Show, ditching the standard shell for weatherproof fabric and a 3D-printed skeleton. The concept featured lighting threaded throughout the exterior behind the semitranslucent Texapore Softshell material, providing a unique glowing style.

Audi showed off its OLED swarm taillight technology back in 2013 and now it's back on the Audi Matrix concept. Like the EDAG Light Cocoon and perhaps more realistic than the Fun Vii, this vehicle design aims to embed lighting tech throughout the car's exterior, making it the perfect four-wheeled companion to your lightcycle.