Our Love Affair With the Future of Food and Drink


Are we getting lazier or have we just gotten smarter at not working harder? It's possible we may see the day when IBM's Watson will control an automated system, delivering unique meals from start to finish without our assistance.

Indeed, many appliances predicted in the concept kitchens of the '50s have already arrived and still we're looking to evolve our at-home convenience further into the future. The Internet of Things now lets us monitor, control and cook without even being in the room. Sure, we're still working out the kinks, but there's an amazing array of helpful gadgets to take the guesswork (and elbow grease) out of crafting the perfect meal. Some even look after our well-being, prodding us with suggestions for a healthier lifestyle.

So join us as we take a look at some culinary gadgets that'll help take the heat out of the kitchen and give us more time to kick back.

Looking to the future

Controlling kitchen appliances and monitoring an entire home from one electronic panel? In the age of the connected home, it's not that far-fetched, but in 1957, it was just short of a miracle. Indeed, “RCA-Whirlpool’s Miracle Kitchen” marketing was all about the possibilities of the ultra-modern home. Quite a few of the concepts envisioned have actually arrived. So are we living the dream yet? 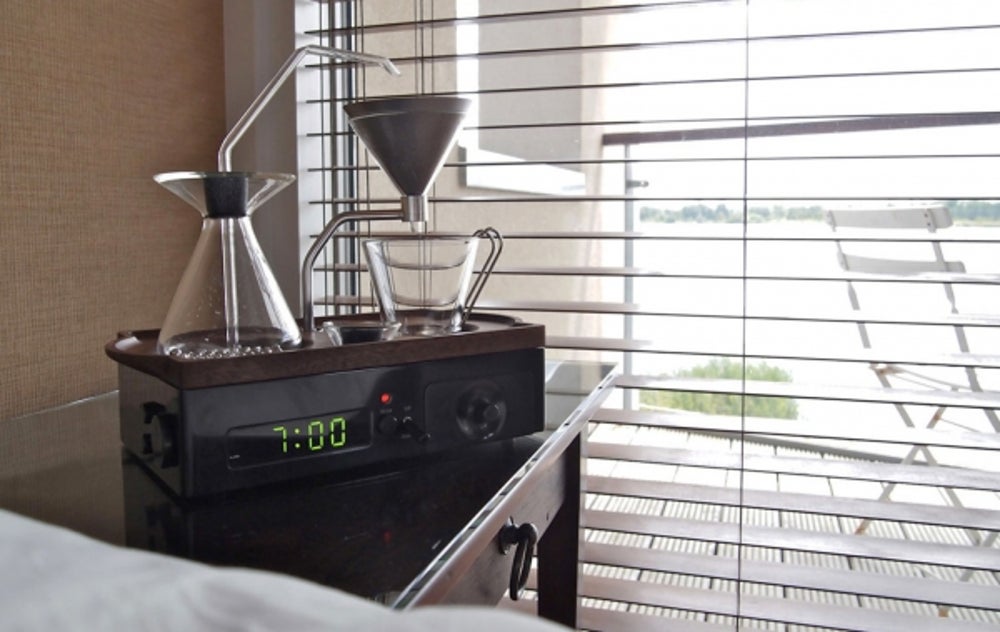 Image credit: Engadget
The magic of modern technology is at work in industrial designer Josh Renouf's Barisieur. Imagine the bliss of having a fresh cup of pour-over coffee ready in the early AM to help you ease into the waking world. That's the idea, although it's not yet fully realized as a consumer product. Induction-heated bearings will boil water, while compartments for sugar, extra grounds and a chilled unit for milk stand at the ready to mix your perfect cup of wake-me-up. Oh, and it's a clock too. 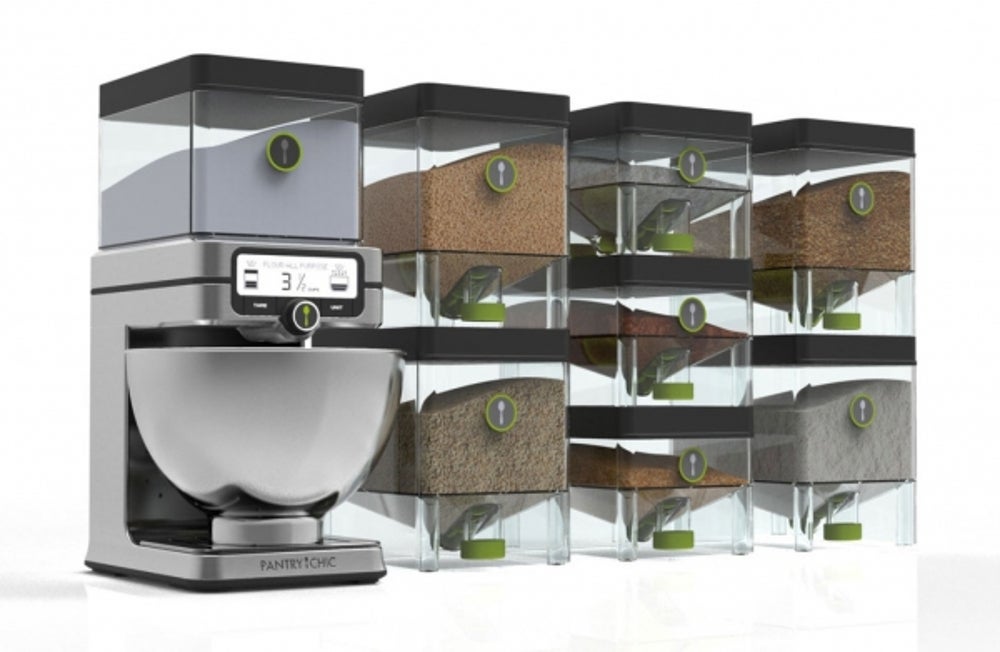 Image credit: Engadget
PantryChic's store and dispense system aims to organize your mixable ingredients in space-age canisters and provides an accurate way to add them to a bowl. If you're frequently confused by conversions, the device even does the brainwork for you. It also has a precision scale and Bluetooth connectivity for long-distance dispensing. Sadly, there are no recipes programmed into it, leaving it in the niche category. You'll still have to put that gray matter to work to plan and assemble the majority of your meals. 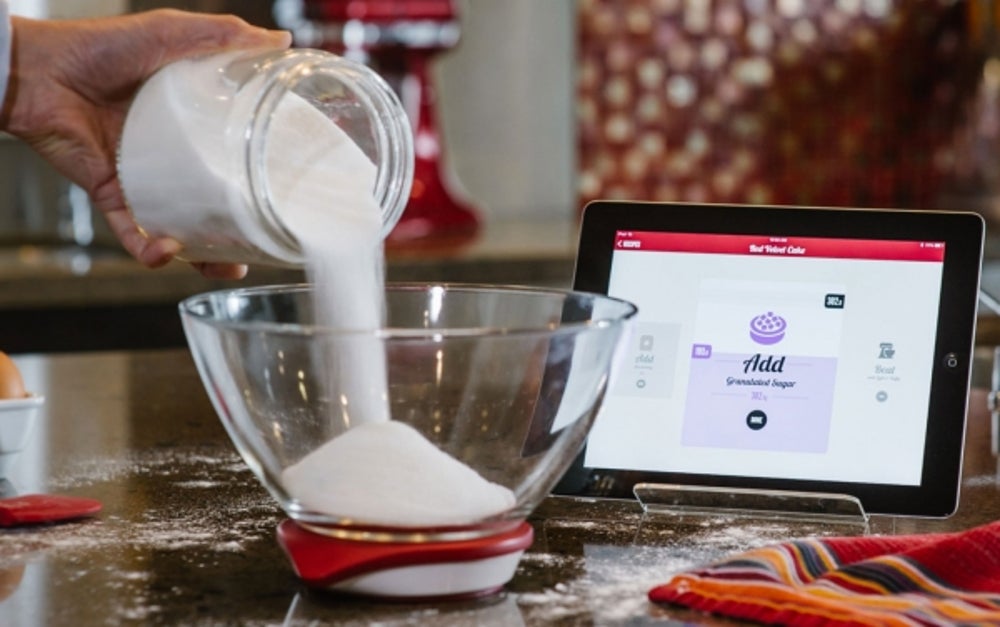 Image credit: Engadget
If you're looking for more brains in a smaller package, Drop's smart kitchen scale could help with measurements and recipes -- but dispensing and storage is up to you. Connect your iPad or iPhone to the scale using Bluetooth and you'll be walked through the measurements for baked goods that won't break your teeth. It can scale down recipes if you're running low on an ingredient and soon may even provide viable substitutions for that item you thought you had... 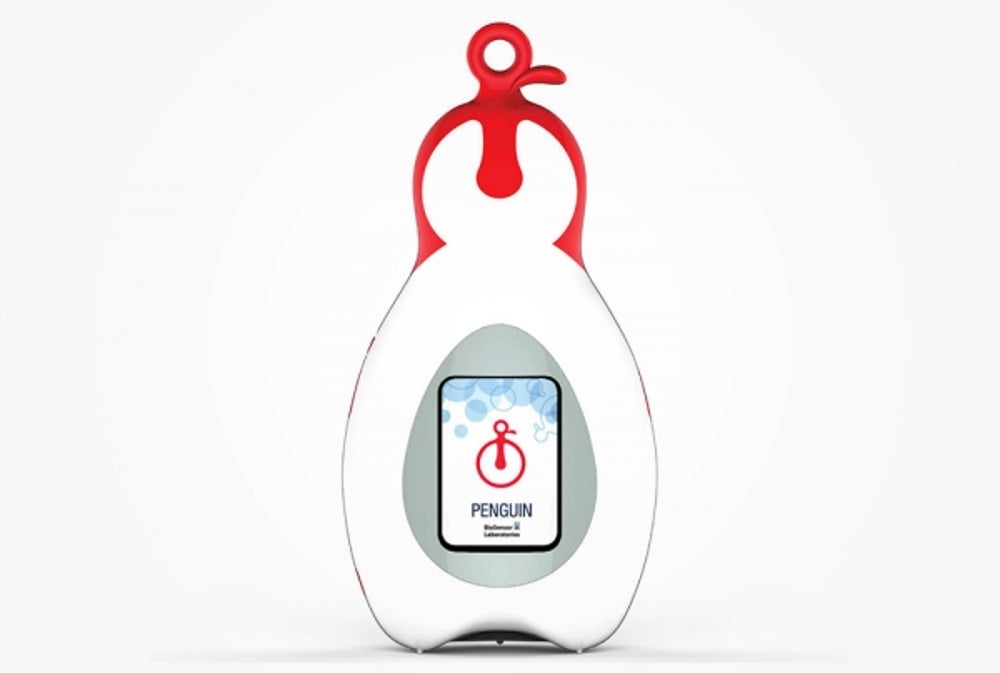 Image credit: Engadget
Your ingredients are all weighed, sorted and mixed to perfection with the help of machine intelligence, but what about their quality? While many products may look good and still smell OK, pesticides and antibiotics may lie beneath. BioSensor Laboratories' Penguin Sensor offers electro-chemical analyzation with its lab-on-a-chip so people can check their food's unwanted exposure right from their kitchen. 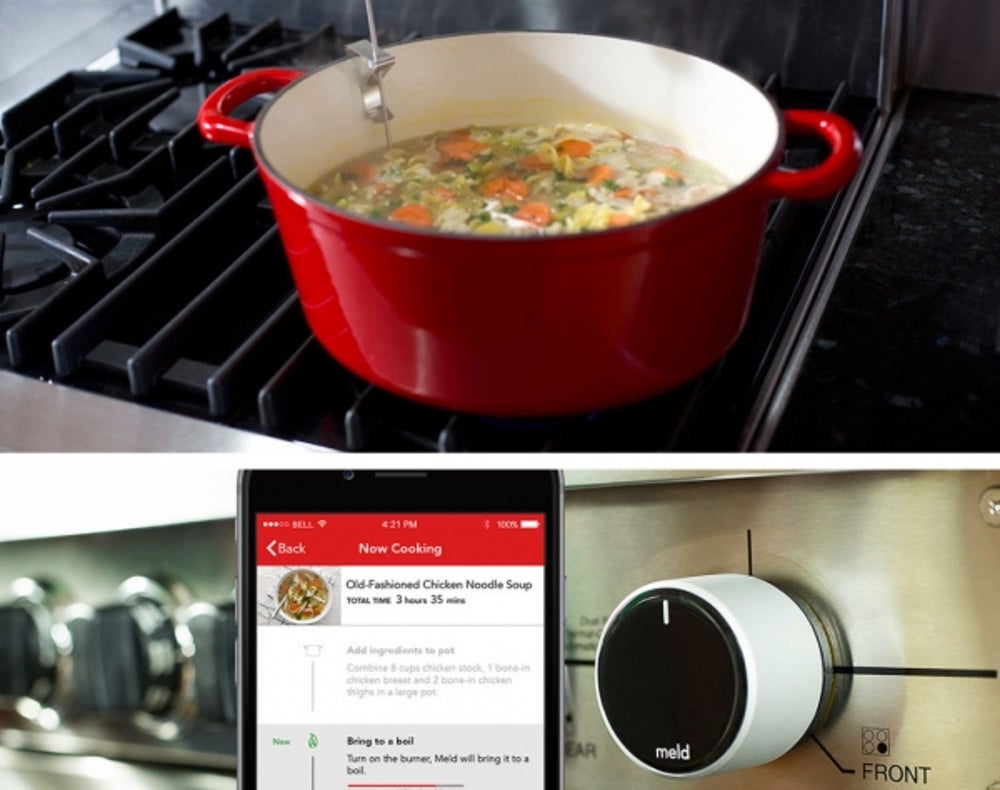 Image credit: Engadget
Food quality? Check. Ingredients measured and mixed? Check. Now it's time to cook that stuff and the future is here to help you. Meld knocked it out of the park on Kickstarter recently with its smart stove knob and temperature clip. You can retrofit yesteryear's cooking controls with this add-on, which will spin to adjust temperature based on feedback from the clip's sensor. Just follow along with the application, which offers a list of pre-selected recipes and gives you the ability to add your own. This little gadget will save you that constant hovering, but you'll need to trust this device with control of your stove. 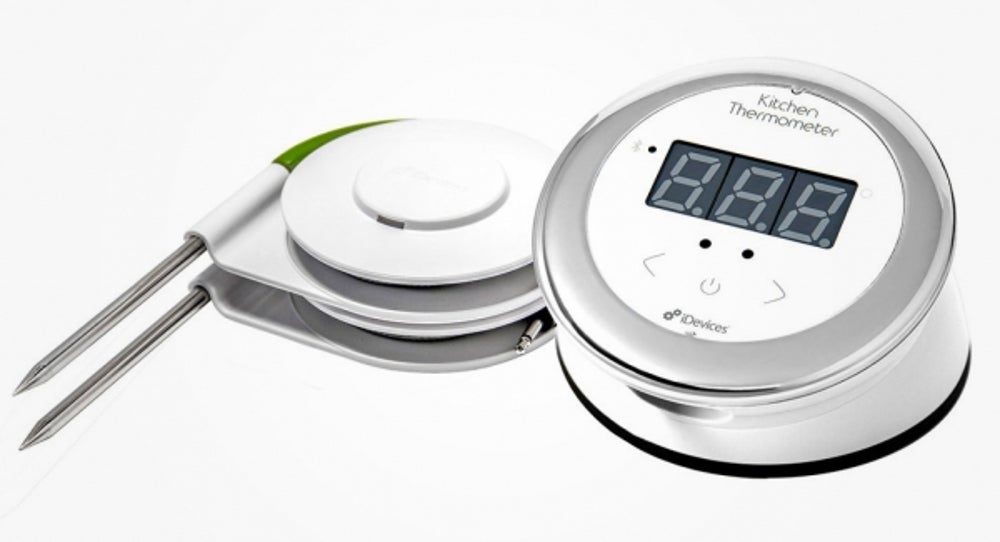 Image credit: Engadget
If you're more particular about who's touching those burners, you can keep heat control in human hands and use iDevice's Kitchen Thermometer to monitor progress. Dual probes can keep track of two zones if you're cooking large cuts and the 150-foot Bluetooth range lets you do your thing until ideal-temp alarms usher you back to the kitchen. It's another great retrofit idea if you're not quite ready to buy into costly, yet high-functioning cooking appliances. 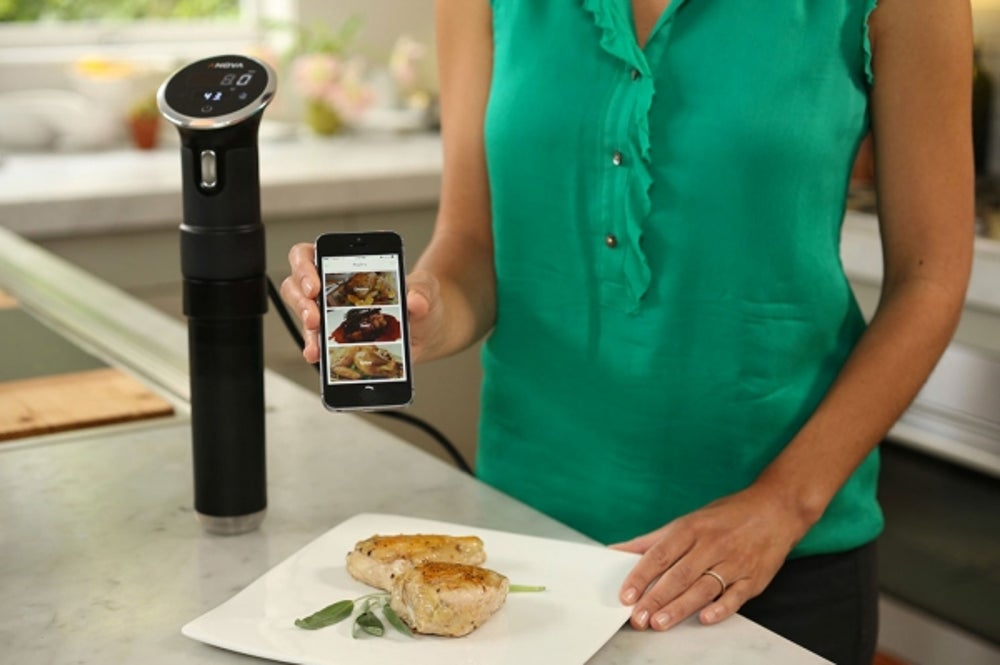 Image credit: Engadget
The sous vide method has been popularized by cooking shows over the past few years and now this technical method of preparation has hit the mainstream. It's a temperature-controlled bath that works to precisely cook food that's been submerged in water (bagged of course). Anova's Precision Cooker and upcoming WiFi-connected Touch devices give you a bit of that high-end "chefiness" at home, all you need is a pot. You can use the app to select recipes, start cooking and monitor progress as long as you're in Bluetooth range (for now). 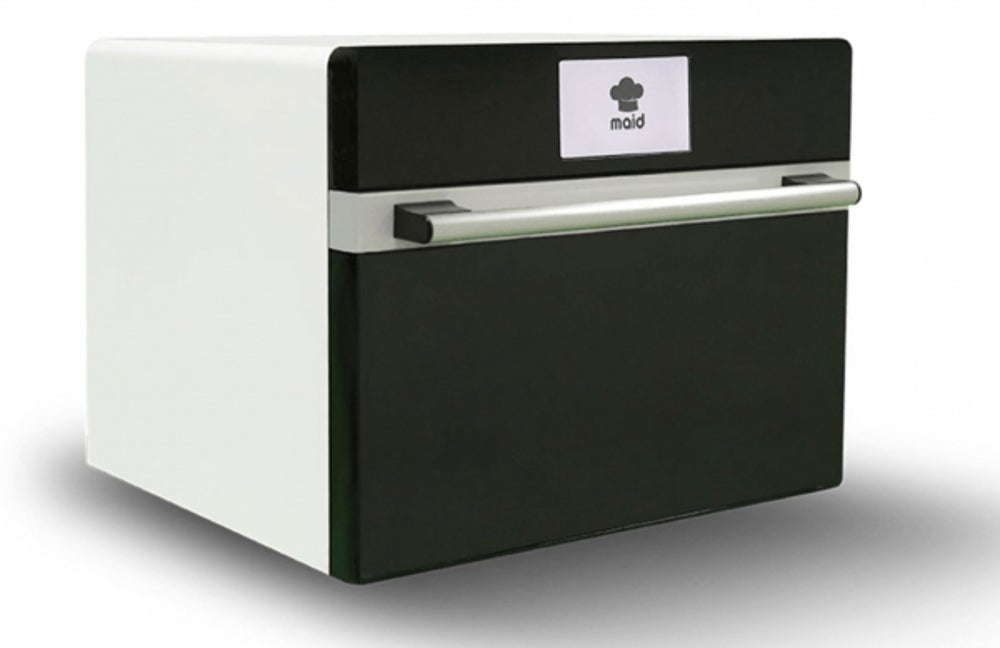 Image credit: Engadget
The name MAID (Make All Incredible Dishes) might have you thinking you'll have your own Rosie in the kitchen, but we're not quite there yet. This smart microwave does try to look after your well-being, though. It was funded on Kickstarter at the end of last year and supporters must have been swayed by its idea of a crowdsourced recipe store. Not only that, but also it plans to suggest meals based on cooking habits and even advise a workout if you've been overdoing it. Gesture controls and voice commands are also slated to be onboard when this device ships in October this year. 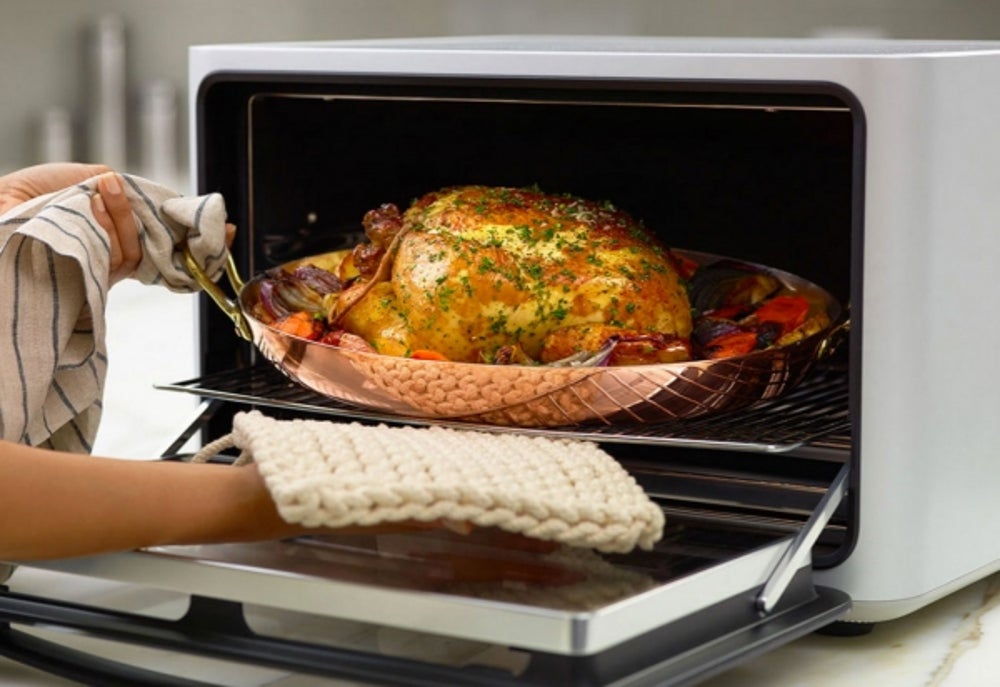 Image credit: Engadget
Yes, it looks like a toaster oven, but on the inside, the June has all the high-tech trappings to lessen your load in the kitchen. Its carbon fiber heating elements provide instant-on heat, letting you go from room temperature to 350 degrees in about four minutes. There's no room for external temperature probes, but they're already onboard. Also (get ready for it) there's a camera inside to give you a wide-angle view of your meal as it cooks. The top of June doubles as a scale to help its digital brain calculate the right cook time/temp based on weight and the mobile app lets you track all that progress. The future of cooking has a steep price, but it's significantly less if you pre-order before July 10th. 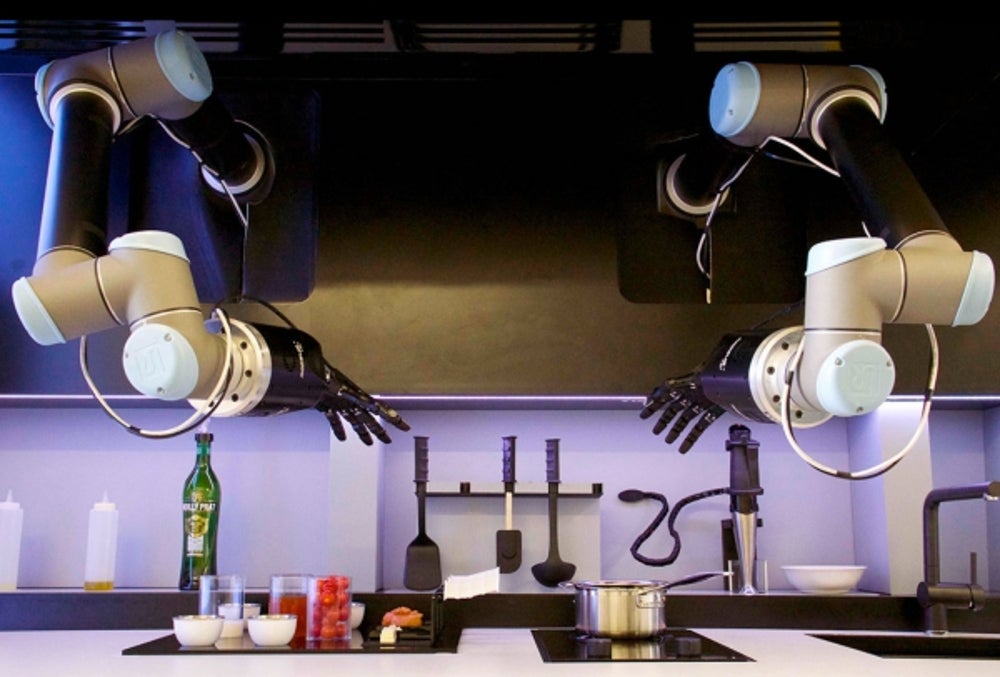 Image credit: Engadget
While some robotic cooking solutions limited themselves to a single trick, this Moley Robotics creation is designed to replicate the process of making an entire meal from scratch. Don't throw away that apron yet, though. This setup, including the arms and specially built sink, oven and dishwasher (yep, it cleans up too) won't be available for another two years. The price tag is currently set at $15,000 and we doubt that it's going to be Robopocalypse-proofed, so watch what you stock in the kitchen. 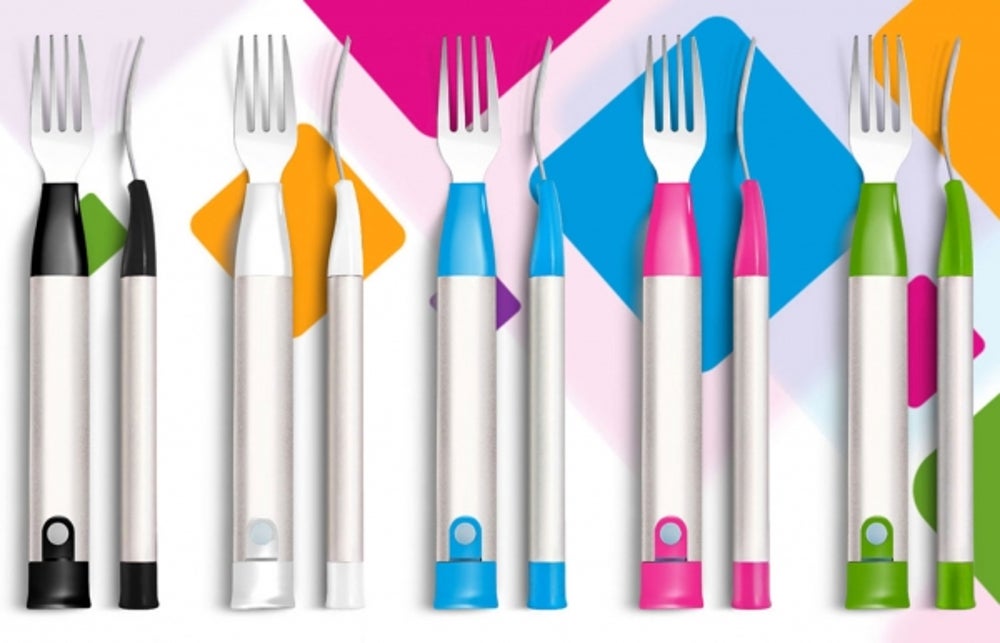 Image credit: Engadget
All that kitchen tech doesn't stop when you cross the dining room threshold. If you've put robots in charge of preparation, why not enjoy a little digital oversight when consuming the meal? HAPILABS offers an array of fitness and health products, but the HAPIfork is the only one that comes between you and your food. This Bluetooth-connected utensil alerts you if you're exceeding the food-speed limit with a vibratory sensation. The company sites scientific studies to claim that eating too fast can be hazardous to your health and that gluttonous behavior should be curbed before things go pear-shaped. 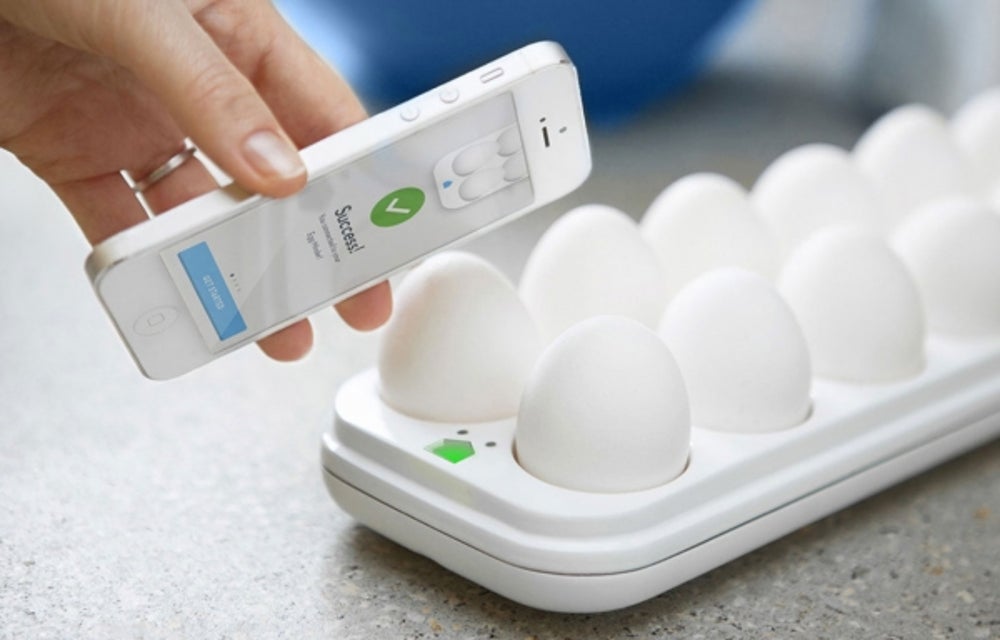 Image credit: Engadget
Until the robots do the shopping (see next slide), you may need some help keeping supplies on hand. Quirky, formerly a maker of interesting inventions, supported one helpful (if not popular) solution to keeping track of supplies once you've already left for the store. The Egg Minder is a WiFi-connected tray that can be inventoried from anywhere using the mobile app. It's a single-use product, sure, but you'll probably be fully stocked with eggs from here on out. 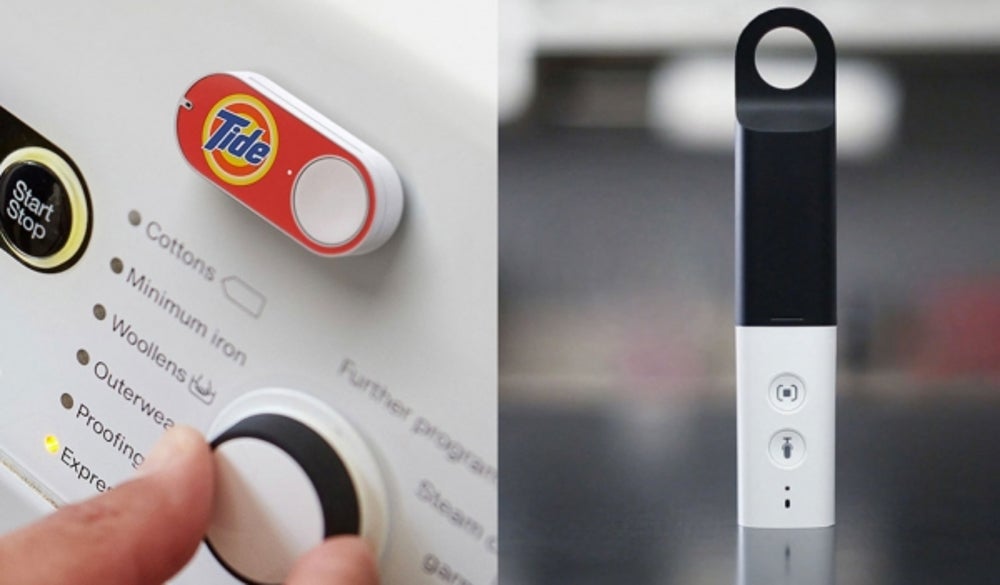 Image credit: Engadget
Amazon continues to do its best at breaking down the barriers that keep you from buying more stuff on a whim. In 2014, the mega e-tailer released Amazon Dash, a WiFi-connected device that lets you scan products in your cupboard or even speak aloud what you need, thus adding them to your online shopping list. This year, the company turned things up a notch and provided the Dash Button, giving you one-click ordering.
More from Entrepreneur