Leap Transit, the startup that served fresh-pressed juice to commuters on its luxury buses, has filed for bankruptcy. The rest of its buses are now up for sale, starting at $5 each.

Signs that Leap was headed toward a shut down started in May. The company suspended its service, although at the time it was supposed to be temporary.

In June, two of its buses were up for auction. More buses were auctioned off in July. Now there are two left, up for sale in an October auction.

The company officially filed for bankruptcy July 15, but the filing wasn't spotted until Tuesday by the San Francisco Examiner. In the filing, Leap estimated that it had between $100,000 and $500,000 of debt, as well as $100,000 to $500,000 in assets. The company could identify more than $129,000 in owed back wages and other claims, but it had a long list of creditors and investors that it had to notify about its bankruptcy.

Rocky from the start

When Leap relaunched in March, it was heralded and blasted for its private-bus approach. The critics in San Francisco claimed it was just another way for rich techies to get to work — the city already has an extensive network of commuter shuttles. One headline said "San Francisco gets the ridiculous luxury bus it deserves." A city supervisor reportedly called it a "crock of s---" and criticized it for creating a two-tier transit system in the city when it first launched in 2013.

Leap's proponents, though, saw it as a problem-solver and a way to get more cars off the street. The high-end line of buses were equipped with Wi-Fi, coffee, snacks, power outlets, and leather seats. It unabashedly catered to those who could afford its $6 ticket each way. 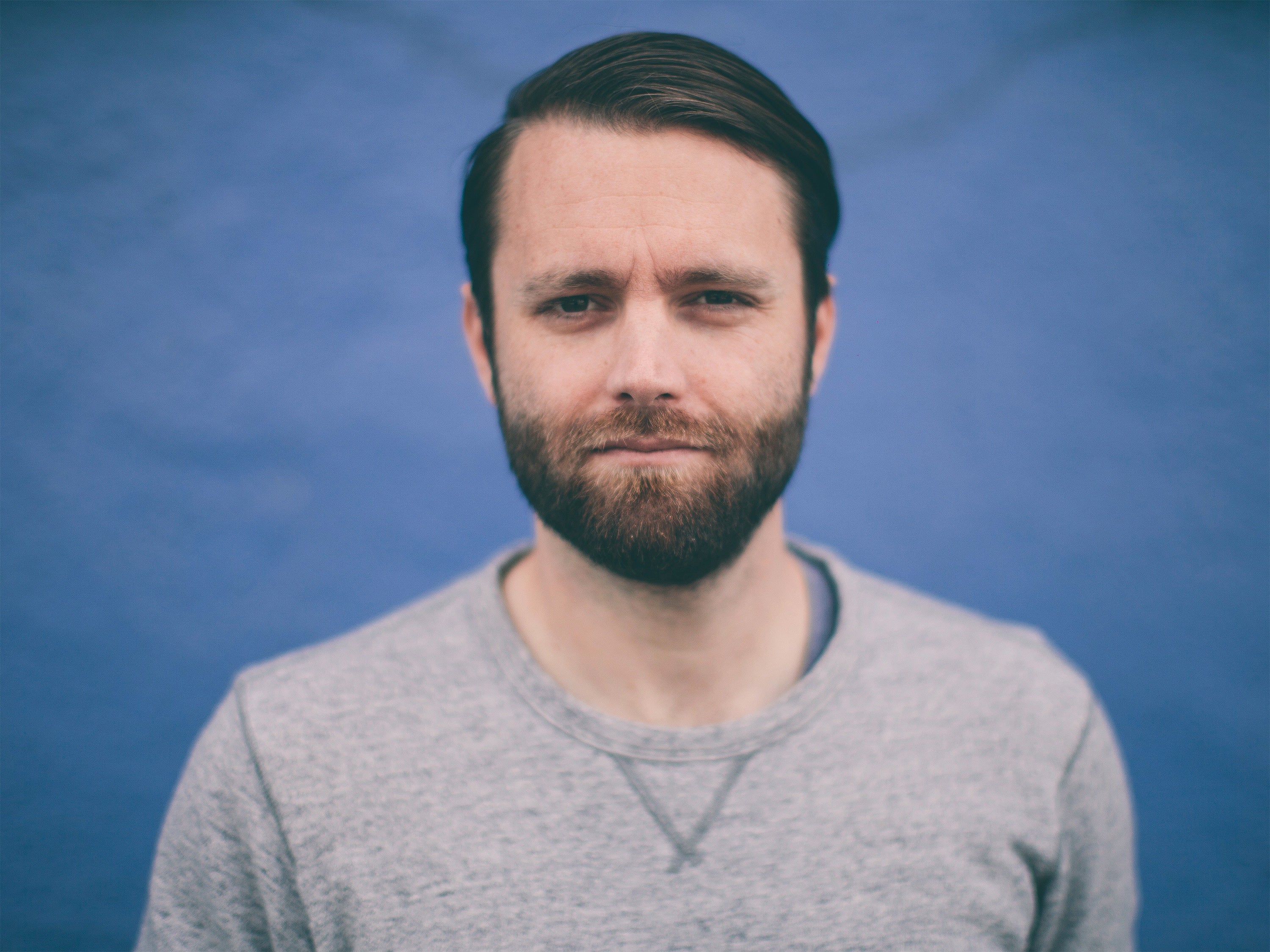 The company attracted money from some of the top venture capital firms in Silicon Valley, including Andreessen Horowitz, SV Angel, and Salesforce CEO Marc Benioff.

Despite being the second-largest shareholder after Leap's CEO, Kyle Kirchhoff, Andreessen Horowitz no longer lists Leap as a portfolio company.

Kirchhoff and Leap did not return requests for comment.

Its debut in 2013 was a test run, and the company profited $13,567 from its trial period, according to the bankruptcy documents.

Leap Transit took some time off to get its permits, but then ran into problems from the state, which denied it a permit since it only operated in San Francisco. The city, in turn, did not require it to have a permit either, according to the San Francisco Chronicle.

The company relaunched in March 2015 without any permits from the city or state, a problem that continued to dog it. It was told it needed to add wheelchair accessibility after it purposely yanked the gear out during the bus remodelling.

The startup also ran into complaints from its launch. When Business Insider reporter Matt Weinberger rode it during the first week, the Leap "attendant" on the bus said that it had already changed its stop locations twice after the bus blocked a homeowner's driveway and then a convenience store.

A look back at luxury

After it took what was supposed to be a temporary break in May, the startup never rolled again.

Here's a look back at when Weinberger took his first and only trip on a Leap bus: 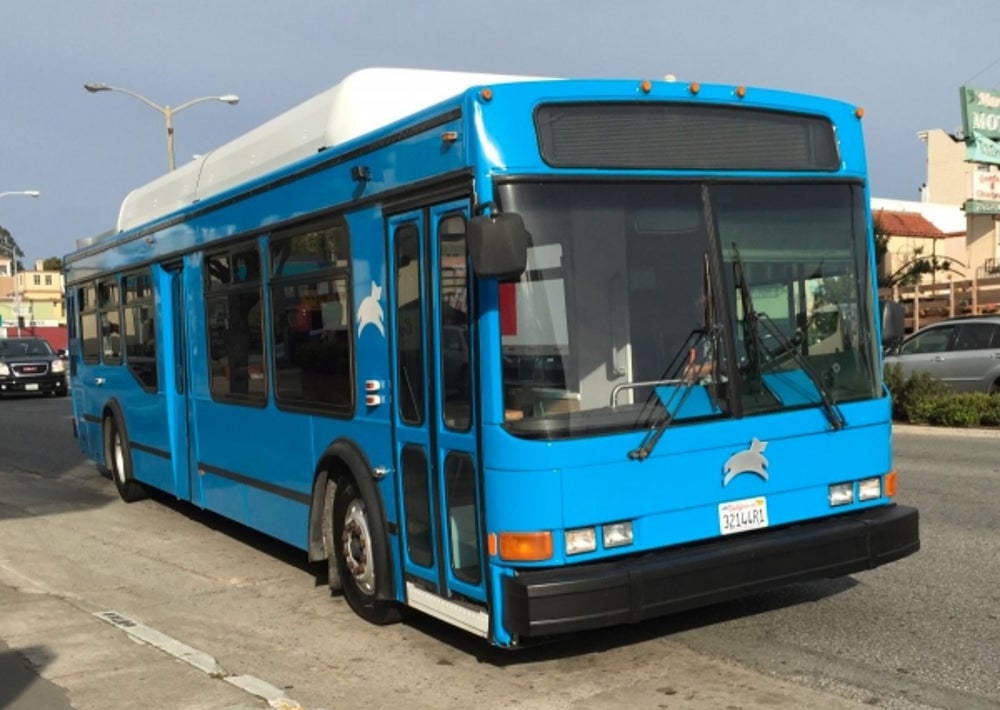 From the outside, Leap looks like your normal, everyday city bus, just in a bright shade of blue. Before you get on the bus, you have to pull up the app, which provides a real-time arrival estimate as well as a number for how many seats were left. You can either check in with a QR code or activate an "express" check-in option, which uses Bluetooth to check you in automatically. I went with the second option. 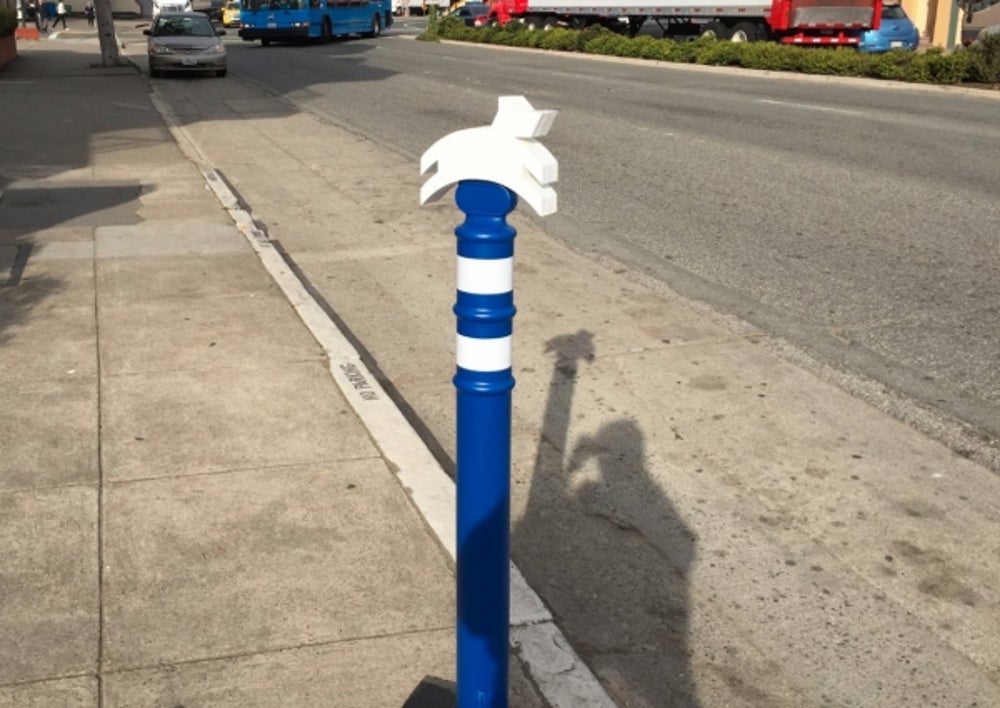 Leap stops were demarcated by blue-and-white poles with the Leap rabbit icon on top. 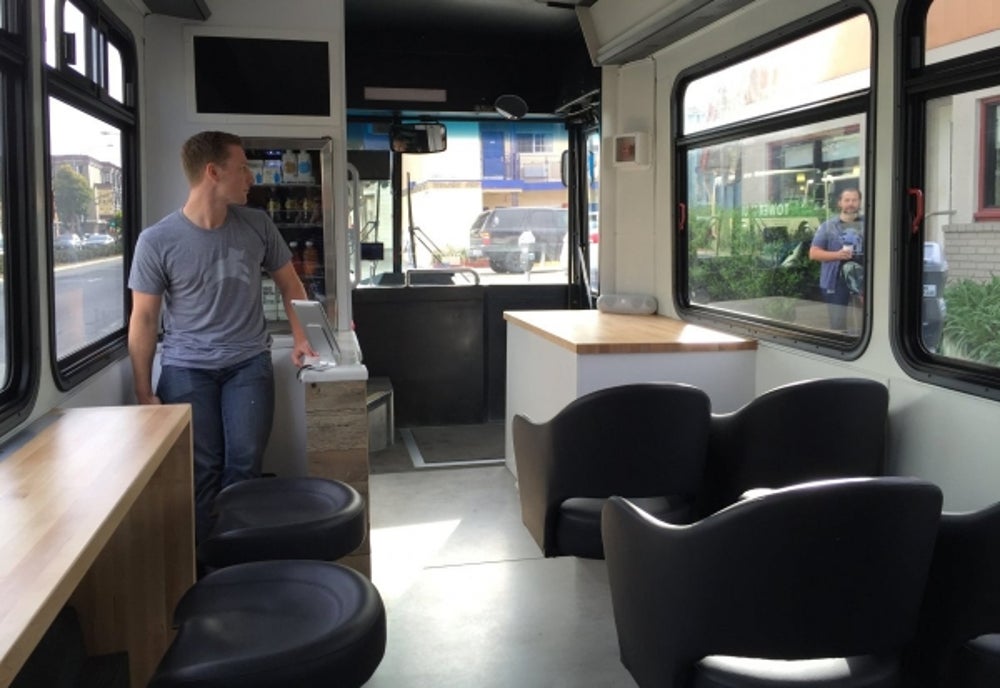 I was skeptical, but as soon as I stepped onto the bus, my phone buzzed, and Richard, the Leap "attendant" on duty, confirmed that I was checked in. True to expectation, it was just me and Richard on this bus. Given free rein to choose my seat, I sat down at what looked like the counter at your everyday coffee shop and sat on the leather stool, facing the window so I could watch the masses not on a private bus go by. On the other side of the bus were rows of black leather armchairs. 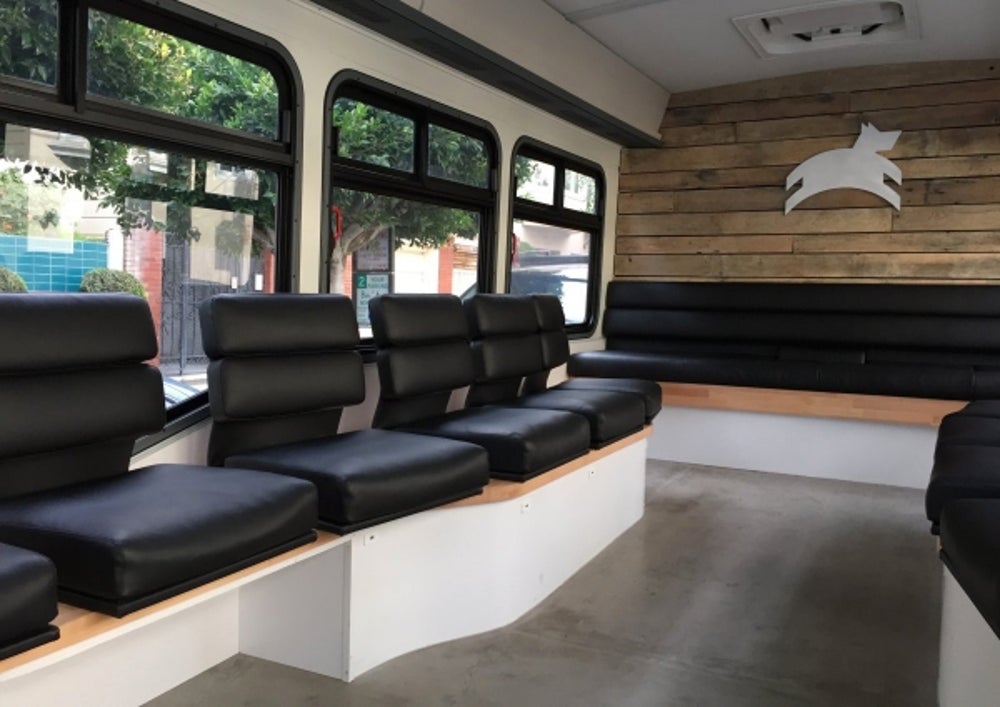 In the back of the bus was a more open seating area with benches and wood paneling. 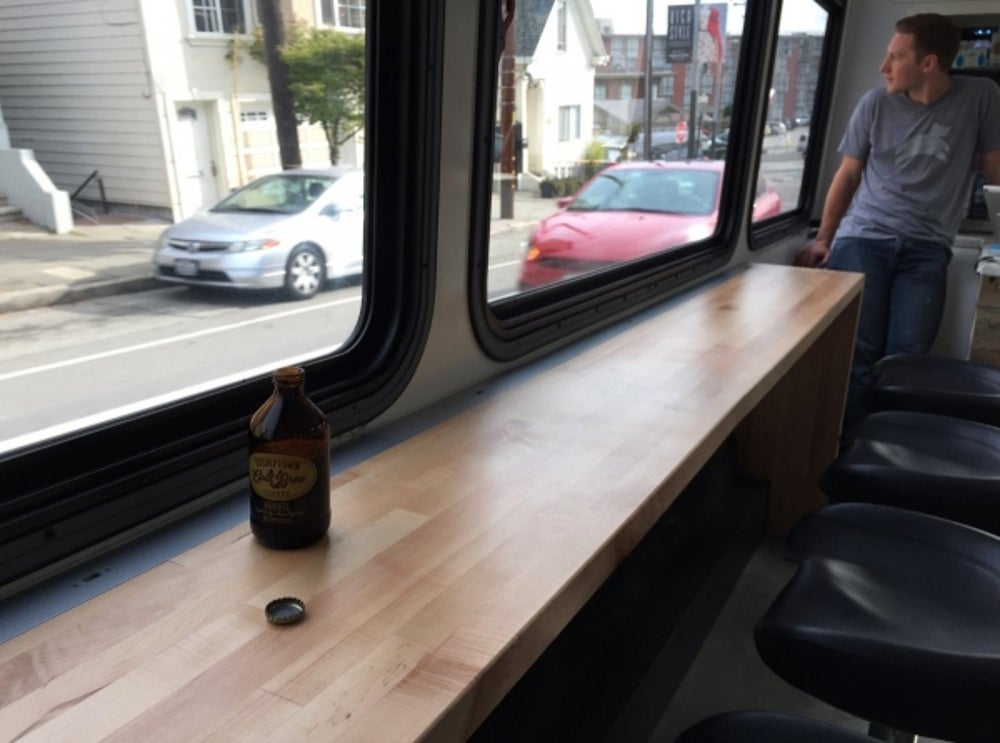 I ordered a Stumptown Cold Brew iced coffee from the Leap app, which automatically charged me $4.50 before Richard handed me the drink. Other options included cartons of Blue Bottle New Orleans iced coffee, coconut water, and fresh-pressed fruit juice. If I were hungrier, I could have also ordered a yogurt, a Simple Squares "Cinna-Clove" snack bar, or a whole-fruit energy bar. 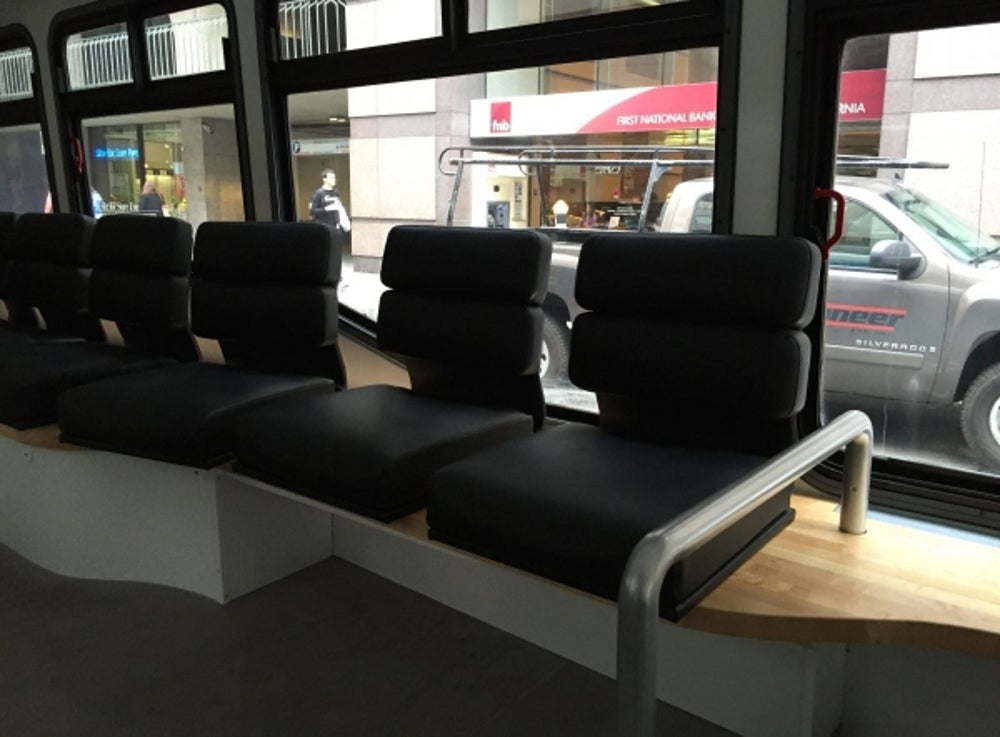 The best thing I could say about Leap is that it's boring: It's designed to be frictionless, so you sit there, have a smooth ride, and get off. It is, admittedly, a stark contrast from a crowded city bus. 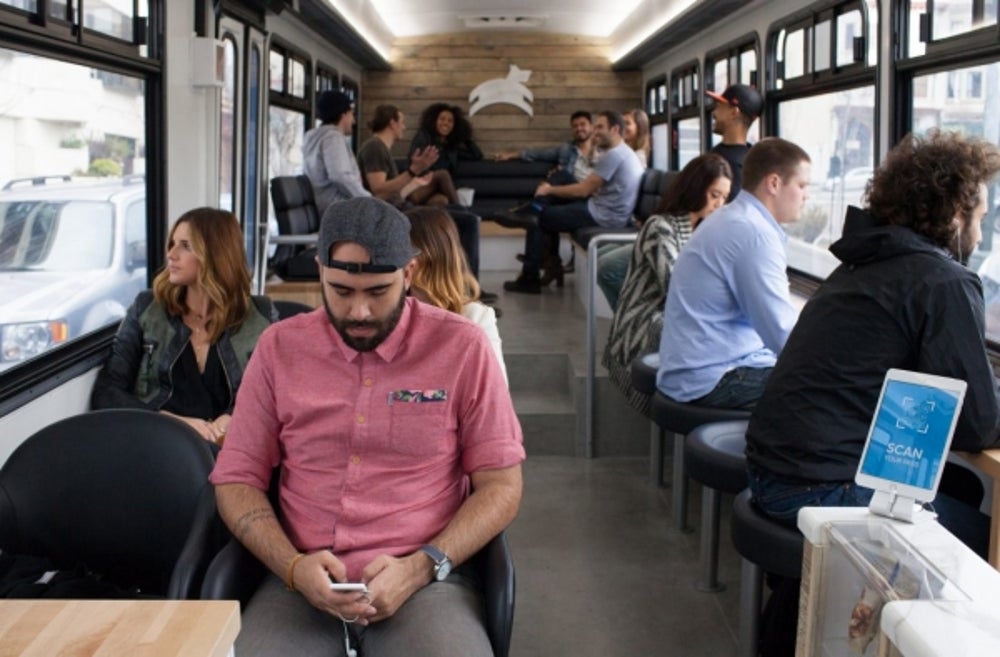 In press photos, Leap advertised its bus as full. During Matt's ride in March, three people were on the bus during its peak. Good-bye, Leap.

Mega-Mall Operator CBL the Latest to File for Bankruptcy