From an air pollution pen to a robot arm -- check out some of these successful out-there campaigns.
Next Article

Kickstarter is a great way for entrepreneurs to get funding for their out-there ideas. And when it comes to crowdfunding -- no idea is too crazy. You’d be surprised at some of the things people are willing to fund.

In 2014, Zach “Danger” Brown wanted $10 to make a potato salad -- so he started a Kickstarter campaign that wound up raising more than $55,000. From an ostrich pillow to a Grilled Cheesus (i.e. a sandwich press that toasts the face of Jesus in bread) -- you’d be surprised at some of the campaigns that gained traction.

A pen made from air pollution, an origami canoe, a levitating timepiece -- this year, we’ve already started seeing wild campaigns. Check out the craziest Kickstarter campaigns of 2017 -- so far.

Note: Funding amounts are accurate to when this story was published.

Pens with ink made from air pollution 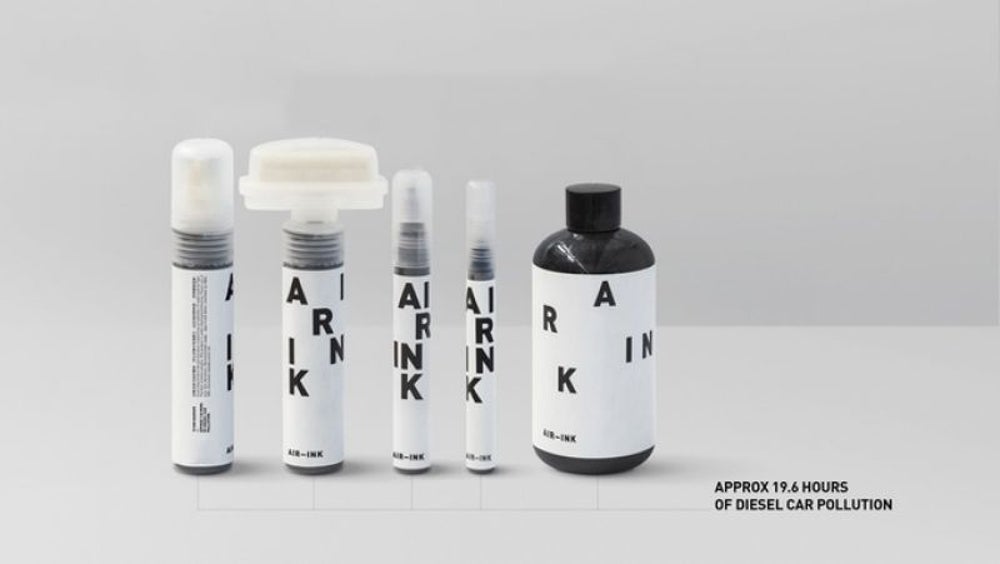 Being an entrepreneur is all about seeing opportunities where others don't. MIT grad Anirudh Sharma and the Graviky team certainly look to do that with Air-Ink, which utilizes air pollution and turns it into an ink-like substance. The startup has created felt-tip pen markers and bottled silkscreen ink that utilize pollution.

To collect pollution, Graviky attaches a cylinder-shaped object the company calls a “Kaalink” to car mufflers, engines and chimneys. The device captures toxic material before it’s released into the environment. The collected particles are brought to a lab where any heavy metals and carcinogens are extracted, and then the remaining material is purified and mixed with solvents to create ink. 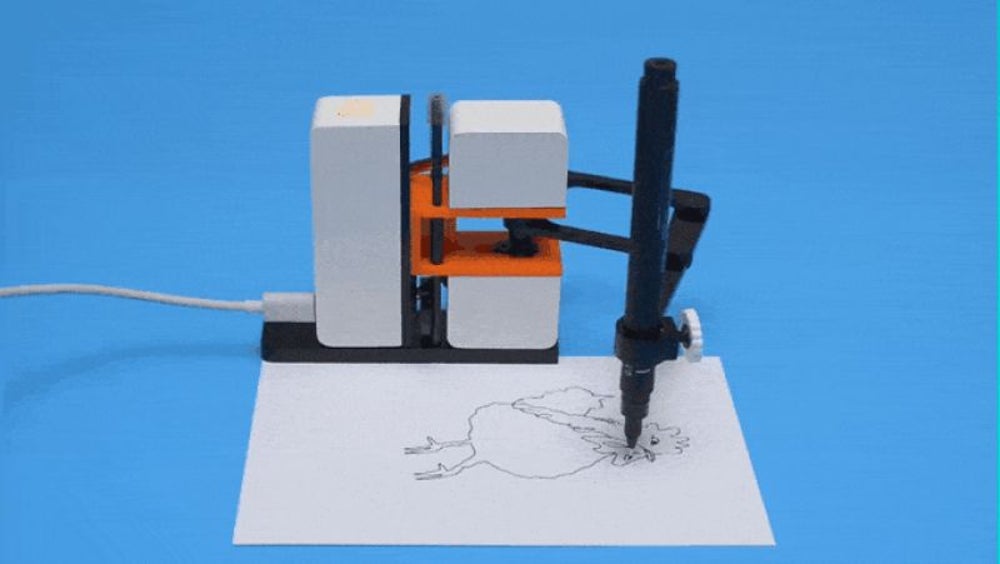 They say “imitation is the sincerest form of flattery,” so you may as well get a robot to copy you. Line-us, a small, electronic robot arm, will mimic what you draw on a screen. While hooked up to the internet, the little robot mimics your motion with a pen and will recreate whatever you draw on a tablet or iPad in real-time. The most amazing thing about Line-us is that it draws in the exact same order as its user.

The Kickstarter campaign was launched in February 2017. Originally sought to raise $48,228, the campaign has reached $89,524 in funding. 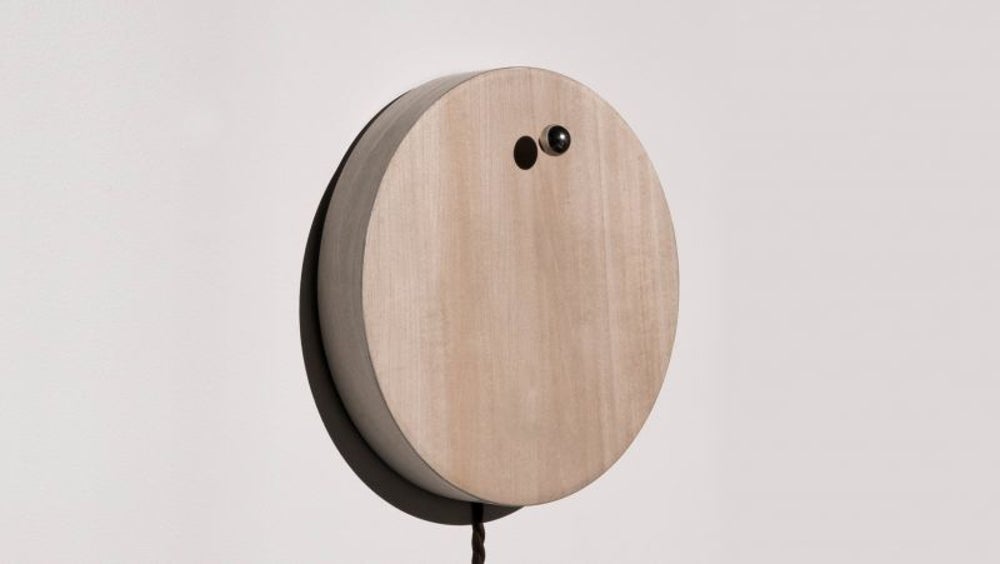 STORY is a levitating timepiece -- an insane way to visualize time. The innovative product features an orbiting ball that rotates around a wooden base, counting minutes, hours and even years.

STORY has three different modes, including Journey mode, where you can set it for a certain time frame such as your favorite season (i.e. one month until Spring left), Clock mode and Timer mode.

Related: The Basics of Crowdfunding 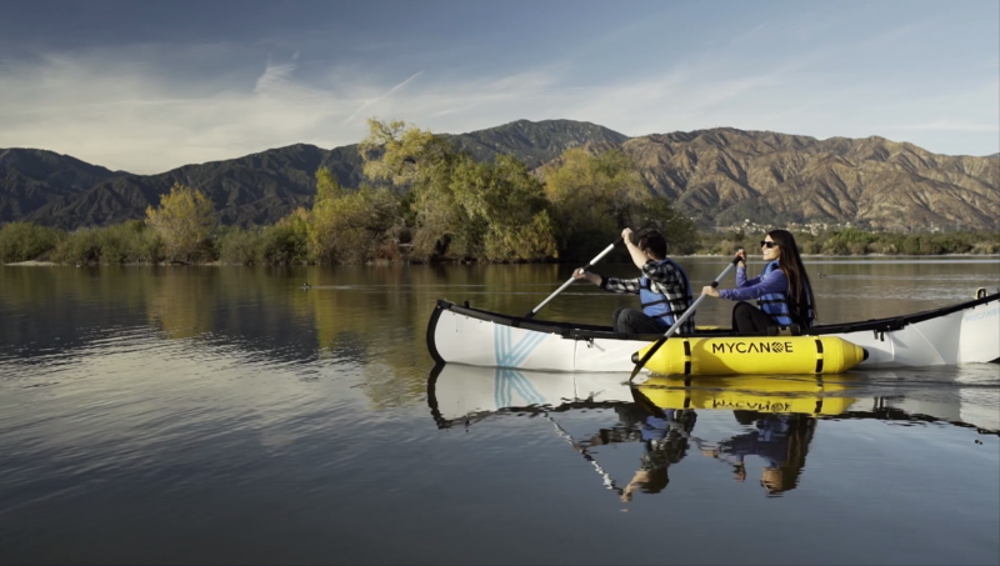 Lugging around a canoe is exhausting. But with this foldable origami canoe, that no longer seems to be an issue.

MyCanoe is a 14.5-foot folding canoe that travels in a box. MyCanoe takes 10 minutes to assemble and five minutes to take down, can be stored under a bed and fits easily in compact cars. The innovative canoe is made from marine-grade polypropylene, making it fully waterproof, and it has UV treatment for taking it out in the sun. 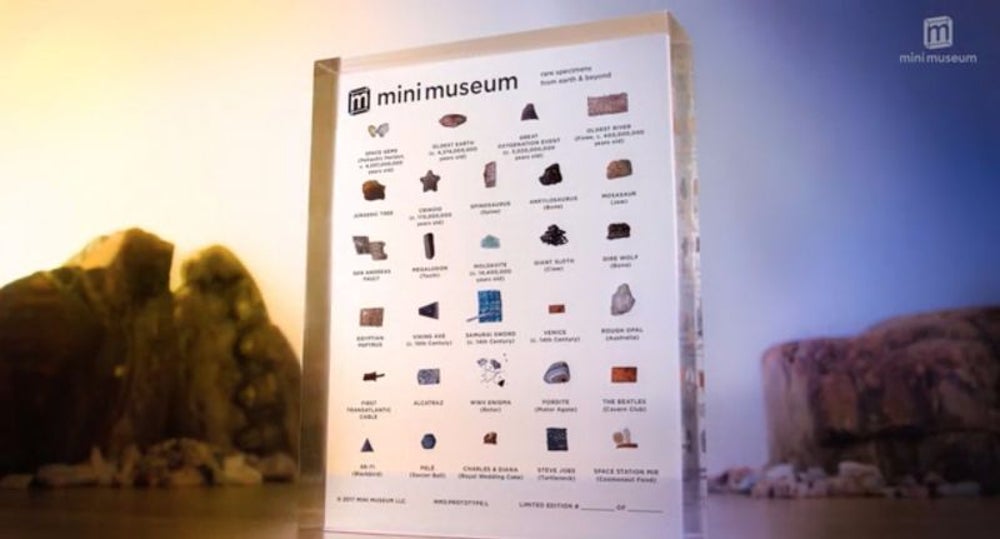 Don’t want to travel to and spend hours in a museum? Now you can take a museum with you wherever you go.

With the help of scientists, museum curators, astronauts and other adventurers, Hans Fex curated his own collection of rare objects, which he’s now sharing with the world through the third Mini Museum.

The Mini Museum features a number of unique and authentic specimens such as pieces of Charles and Diana’s royal wedding cake, Megalodon tooth, Steve Jobs’s turtleneck and more. It’s available in two different sizes -- the small version features 12 specimens and the large has 29. 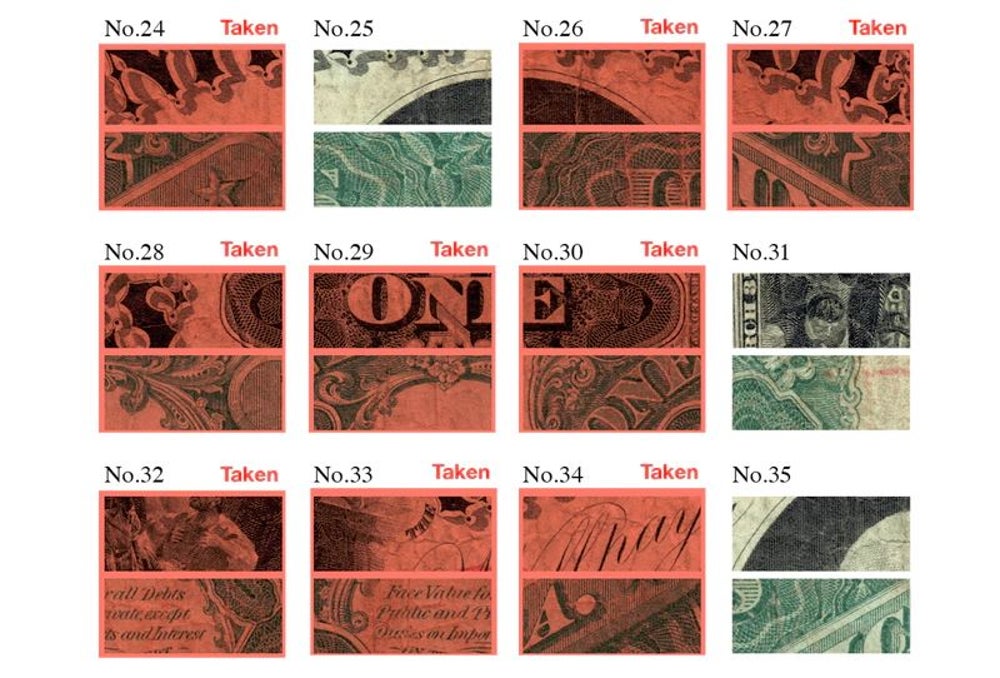 Who knew a $1 bill could be so interesting? This new Kickstarter campaign is seeking funding for a $1 bill broken up into 100 pieces. That’s not all though -- the bill is 100 years old and will only be shipped to 100 backers in 100 different locations.

There’s no doubt this piece of currency has been through a lot. And once the bill ships out, the campaign's creators want backers from around the world to bring all of the pieces back together again (online) by taking a photo of their pieces and sharing information about where they are in the world. 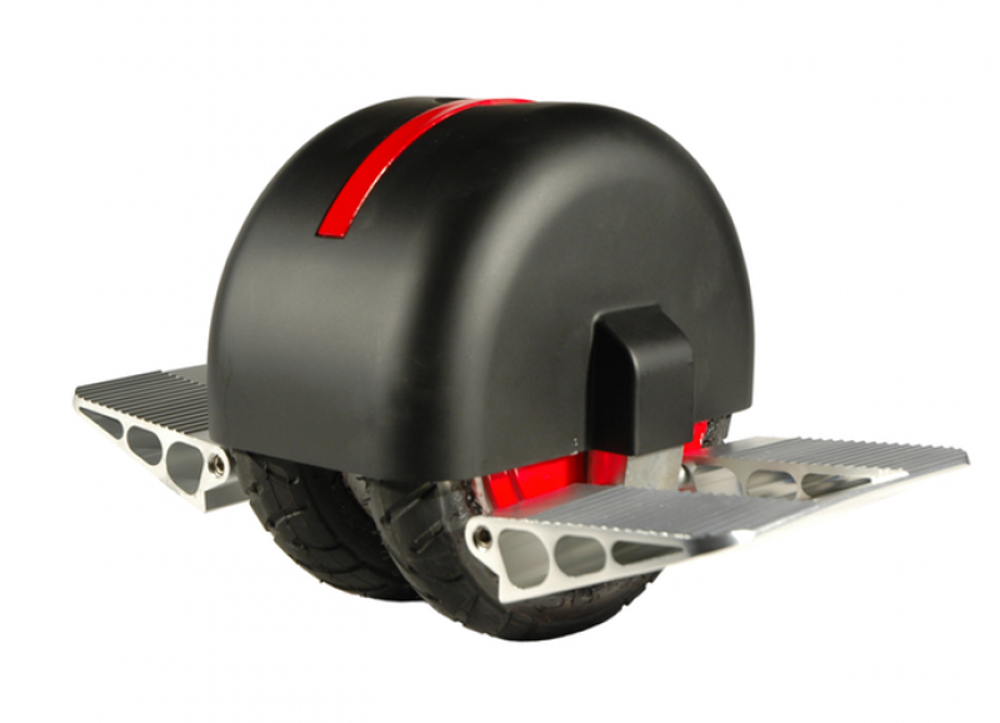 From the makers of the original hoverboard, Solowheel Iota is a self-balancing 8-pound personal transportation device and described as the “smallest, greenest, most convenient e-vehicle ever invented.” Inventist wanted to make its latest creation smaller and more elegant than its previous hoverboard model, the Hovertrax.

The new Solowheel Iota can travel up to 8 miles at a 10 mph and carry up to 250 pounds.

The project was launched on Kickstarter in January 2017. Now available for pre-order, the campaign successfully raised $204,594 in funding.

Related: 9 Awesome Travel Gadgets That Got Their Start on Kickstarter 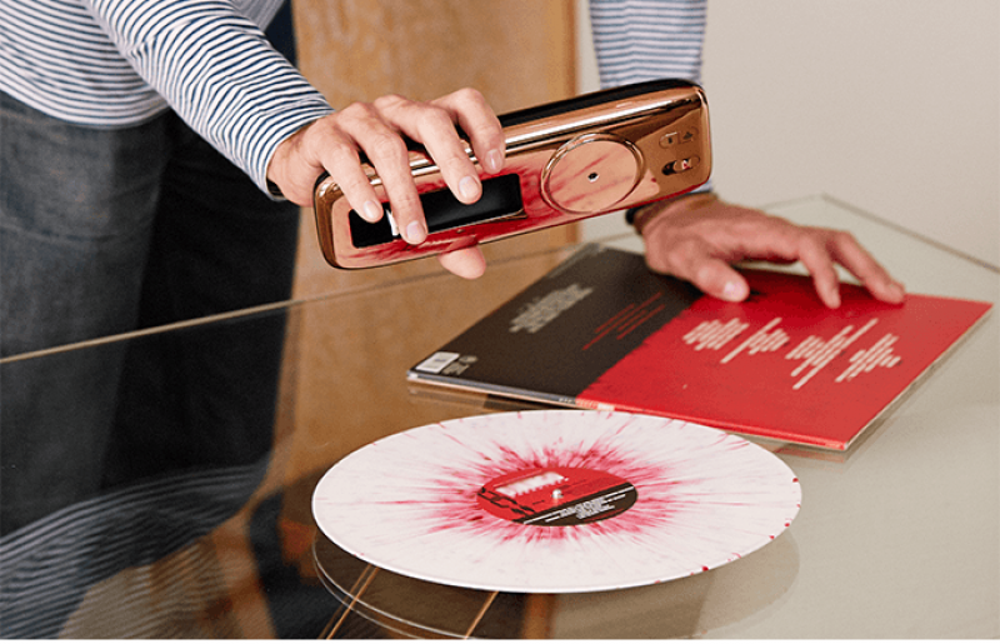 Vinyl is making a comeback. Over the past few years, we’ve seen new turntables pop up and now they’re getting a 21st century twist.

LOVE claims to be the world’s first intelligent turntable. The device reads vinyl records through a traditional stylus, but also hooks up to Bluetooth and Wi-Fi and can be controlled through an app on your smartphone.

Its creators say LOVE is simple and convenient, making it easy to transport. With the app, it’s easy to maneuver too, letting users play, pause, skip and adjust volume through their smartphones. 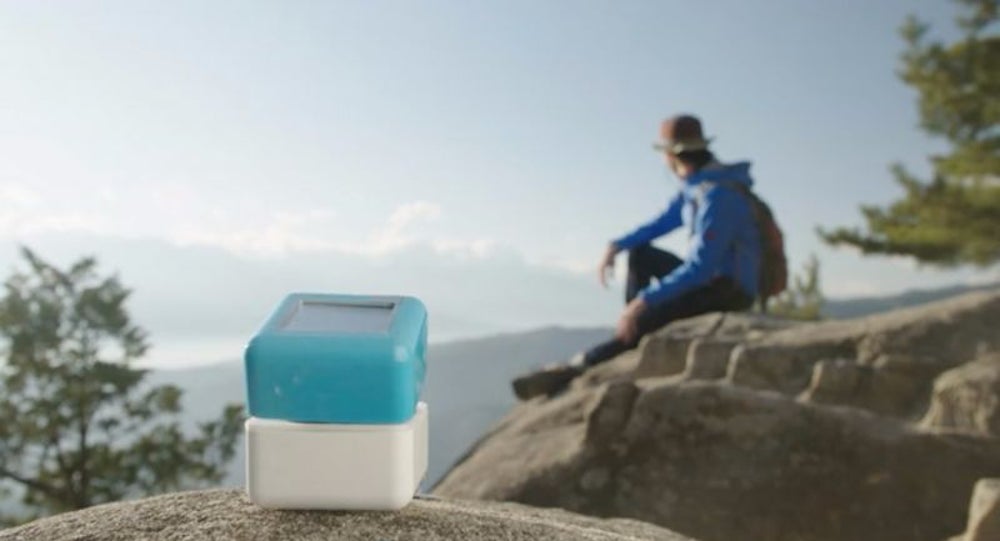 Hiring an assistant is no easy task, although with this customizable portable robot, you can seemingly have an assistant with you 24/7.

PLEN Cube consolidates information from all of your devices, captures events using its smart camera, tracks your motions and keeps you informed. The advanced tech features facial and speech recognition and a powerful processor. From keeping track of your calendar to managing your social media -- think of this new voice-activated robot as your “right hand man,” the company says.

The portable, savvy new robot from Osaka, Japan, was initially launched on Kickstarter in February 2017. Originally sought to raise $50,000, the campaign has reached $70,706 in funding.