The Eclipse Is Here! How 10 Companies Are Cashing in on the Event of the Decade.

From Krispy Kreme to Casper, these businesses are rolling out promotions for the big event. Here's what they're doing and what you can learn.
Next Article

The eclipse is here!

On Aug. 21, the United States will experience a total solar eclipse, the first since the winter of 1979. The rarity of this type of eclipse, combined with the overall weirdness that occurs during these types of events -- think changes in temperature, weather and animal behavior -- have raised anticipation levels across the country. But it’s not just eclipse chasers and astronomy buffs who are getting in the on the action -- businesses are, too.

Take a look at how these companies are cashing in -- and get ideas on how your company can take advantage. 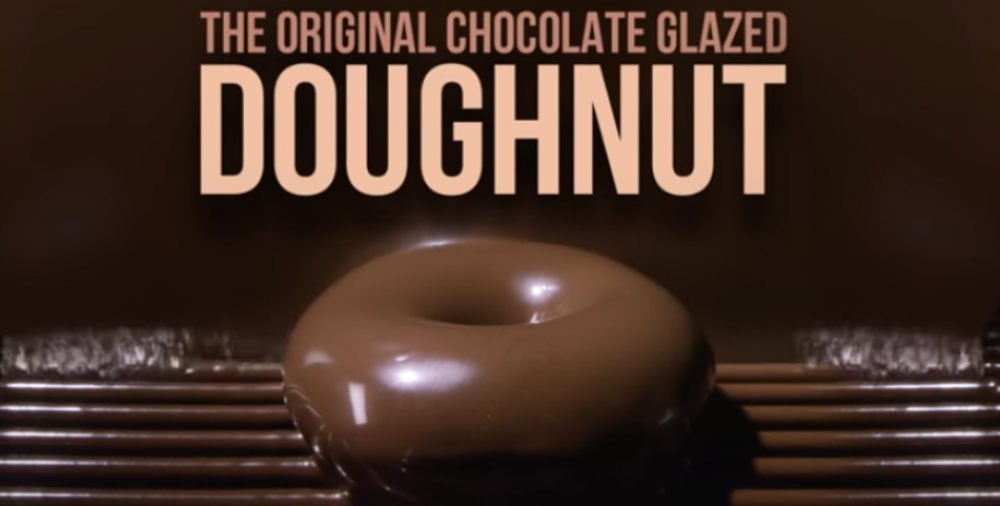 The plan: The donut maker is offering a chocolate glaze donut for the first time in honor of the eclipse at participating locations from Aug. 19 until Aug. 21.

What you can learn: They’re not limiting the promotion to Aug. 21, so you shouldn’t either. Make it easy for customers to participate by creating a days-long special event. 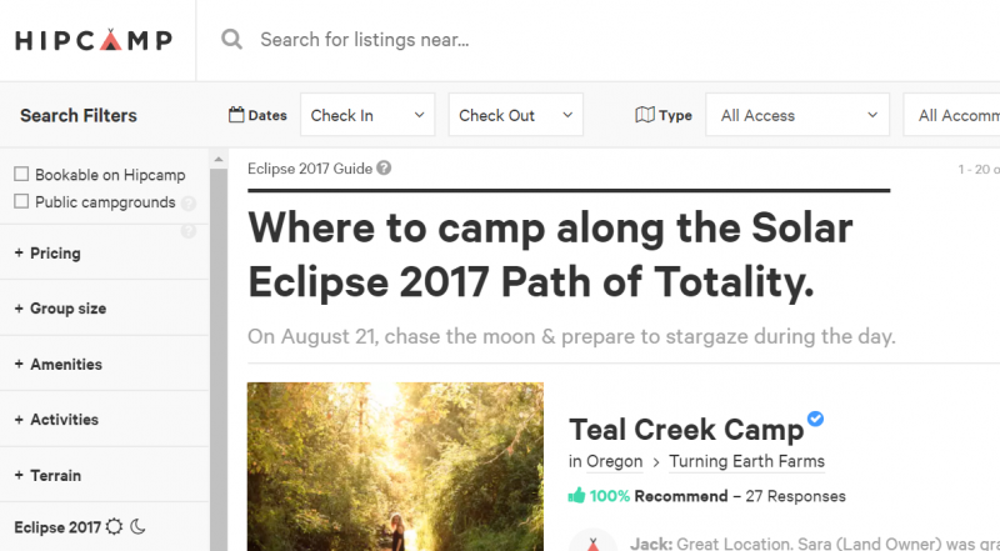 The plan: This new startup offers campsites in off-beat areas such as nature preserves. It put together a list of 23 unbooked campgrounds in the eclipse “path of totality” offering spots costing less than $100 as well as comprehensive map of options for eclipse-watchers.

What you can learn: With many hotels and Airbnbs booked in key areas, this new startup is making it easy for people to take part and take a chance on a company they might not have been aware of. 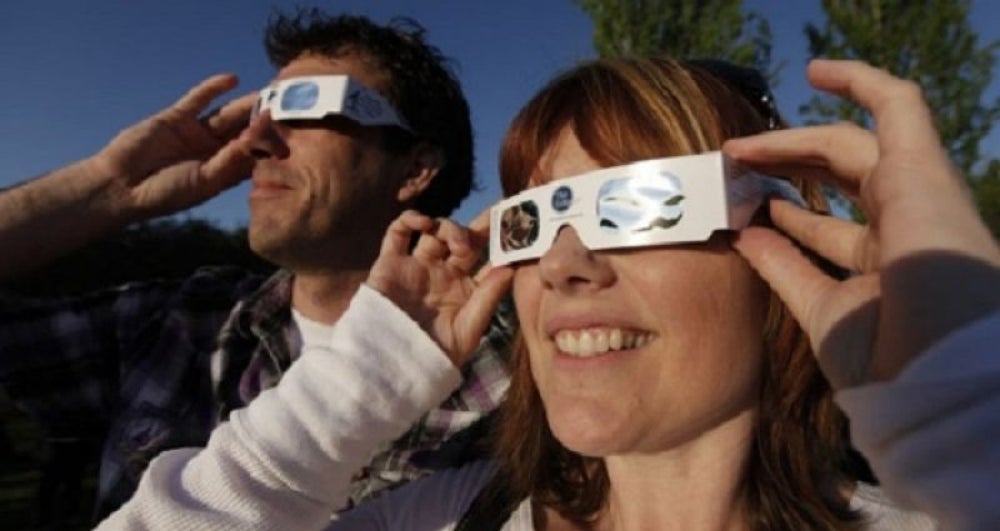 The plan: The company makes paper 3D glasses and has gotten NASA’s seal of approval for its eclipse safety glasses product.

What you can learn: With so many fake glasses, obtaining NASA’s seal of approval gives this product and important distinction in the market. 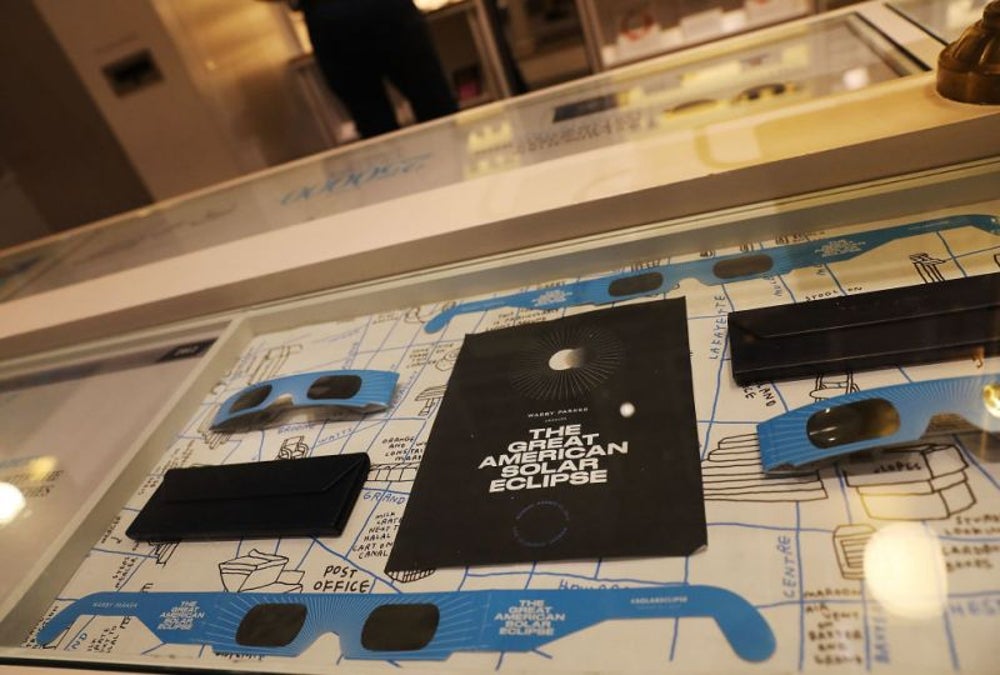 Pairs of free solar eclipse glasses sit on display at a Warby Parker store on August 11, 2017 in New York City. To view the upcoming total solar eclipse on August 21 eye protection is essential. The designer eyeglass store expects to give out thousands of pairs of the glasses before the event. (Photo by Spencer Platt/Getty Images)

The plan: Eyeglass retailer Warby Parker expects to give away thousands of solar eclipse glasses at its shops across the country before the Aug. 21 event. The company has also created a special page on its site about the eclipse and will plan a special event at its Nashville store, which is in the "path of totality," a strip of land that falls beneath the moon's shadow and will be put into complete darkness.

What you can learn: The retailer found a natural tie to the eclipse -- glasses -- and a way to keep people safe and bring them into their stores.

The plan: TSE is a supplier that has helped with the fulfillment of multiple astronomical projects for both the European Space Agency (ESA) and NASA. In preparation for the eclipse, it also developed NASA-approved eclipse-viewing glasses for consumers. It is selling these glasses and other products on a special hub for eclipse watchers.

What you can learn: A hub serving as a resource for consumers can give this company’s brand a wider relevance outside its niche. 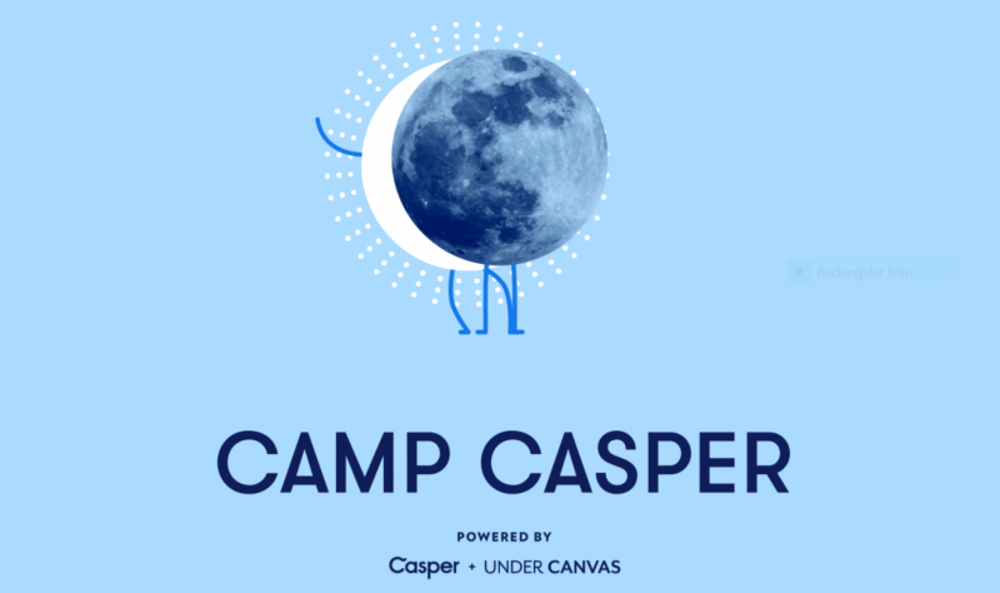 The plan: The mattress maker is setting up a campsite for customers in the appropriately named Casper, Wyoming, which is in direct line of the total eclipse. The experience includes a luxury tent, movies, food and drink.

What you can learn: The company is offering an experience that can’t be found elsewhere -- especially since hotels in this city are long sold out. By selecting a city with its namesake, the company reinforces its brand to a market that might still be learning about the mattress maker.

The plan: The company is dedicated to making eclipse-viewing glasses all year round and this event is no exception.

What you can learn: While eclipses that impact the entire country aren’t common, eclipses occur roughly every 18 months all over the world. The company is reminding consumers that there’s a use for its products past Aug. 21. 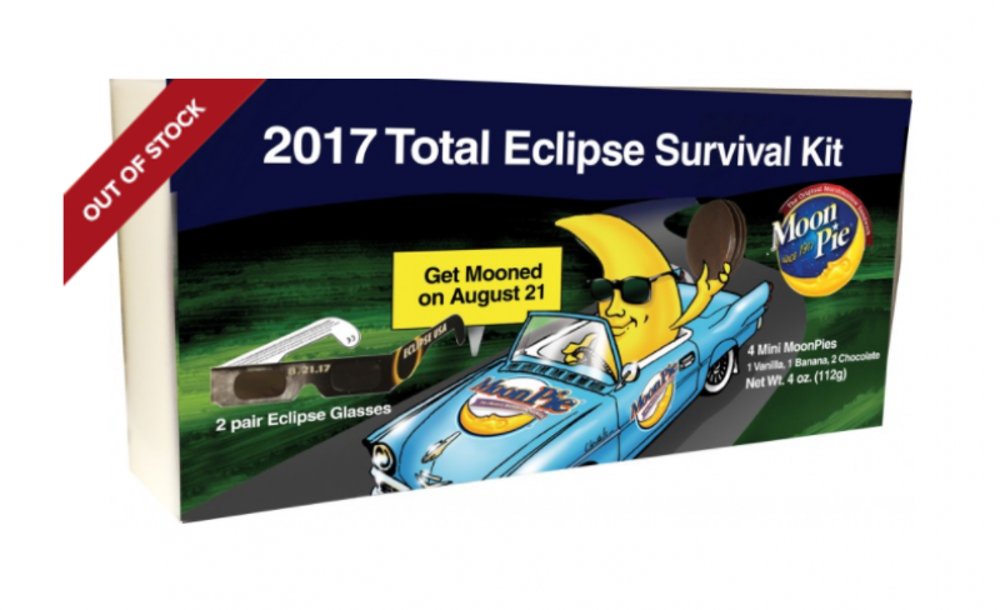 The plan: The makers of these chocolate treats with the smiling moon logo are selling a special Eclipse Survival Kit complete with glasses and enough moon pies for the entire family.

What you can learn: This 100-year-old company might not get the visibility other sweets makers get. Aligning with the eclipse is a perfect fit and a great way to get on the radar of modern families planning viewing parties. 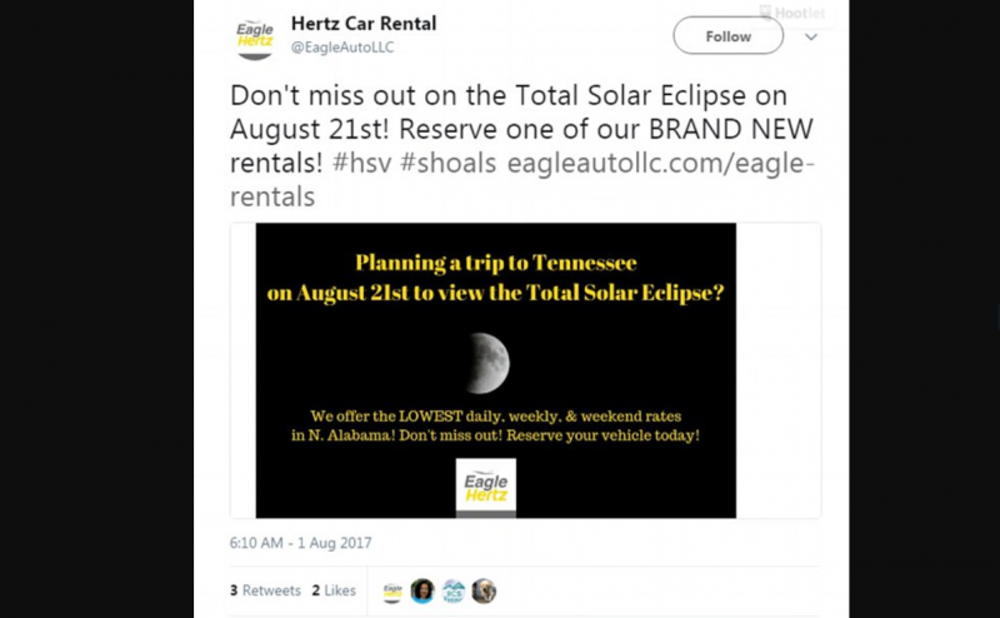 The plan: The car rental company offered promotions to inspire travelers to rent Hertz cars to see the eclipse up close.

What you can learn: The company overbooked in the cities within the flight path, with some customers reporting that they’ve had their cars cancelled. The company has since said it is expanding its fleet to fulfill as many reservations as possible. If you’re looking to create your own promotion, limit availability to what you know you can deliver, creating an exclusive opportunity without the social media backlash. 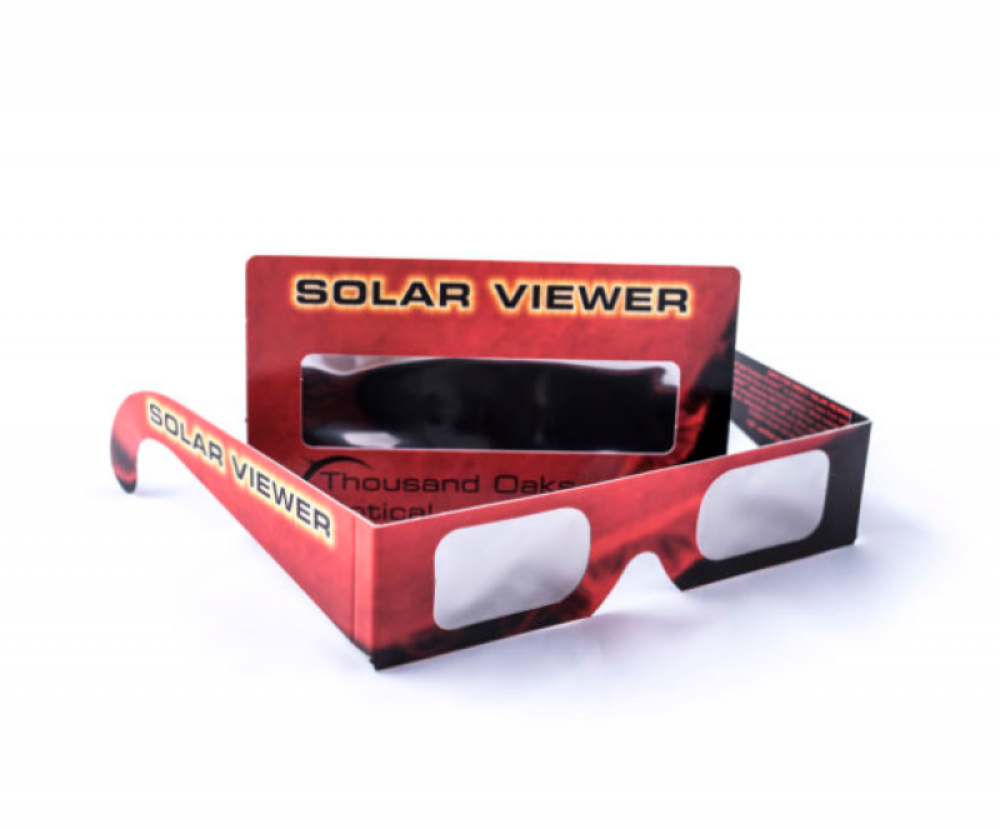 The plan: The company makes the light solar filters use on NASA space shuttles, so it makes sense that its eclipse glasses would be on the short list of products approved by the space agency.

What you can learn: As with TSE and American Paper Optics, the company obtained a special approval, giving its products distinction in the market.
More from Entrepreneur