The billionaire investor has only ever tweeted nine times and follows no one.
Next Article

While he might be one of the wealthiest people in the world and perhaps the greatest investor of all time, there’s a silly side to 87-year-old Warren Buffett. And that’s something you can tell simply by looking at his sparse Twitter account.

Considering the Oracle of Omaha joined Twitter in 2013 and now has a following of more than 1.3 million, you might think the businessman would be active on the platform. However, he’s only tweeted nine times and doesn’t even follow anyone.

While he’s used Twitter to promote his work and share his views, he’s also used it to show off his fun side too. Buffett’s first-ever tweet was “Warren in the house.”

To get down to the bottom of the mystery behind Buffett’s Twitter, we took a look at each of his nine tweets to find out what they could really mean.

He’s officially “in the house.” 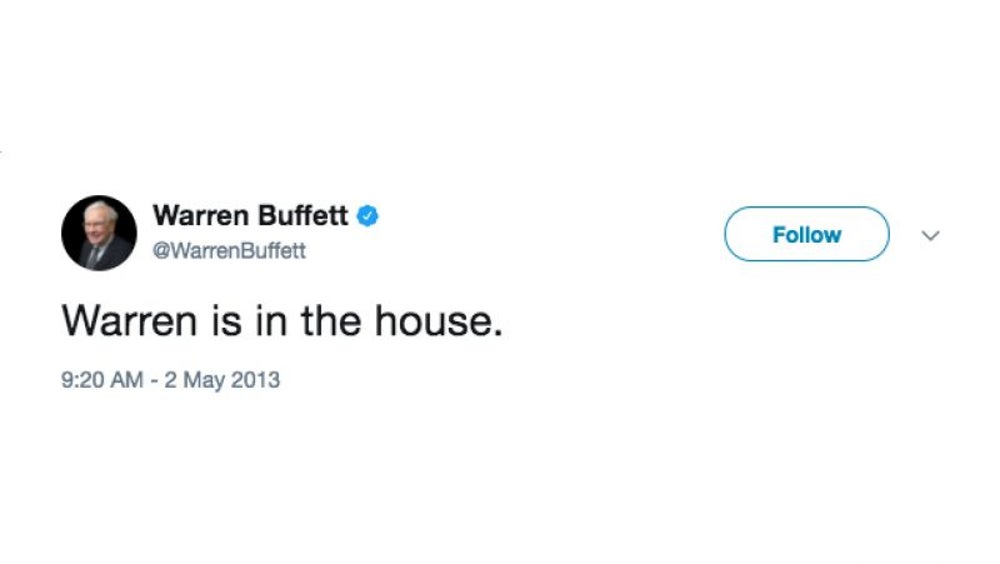 While he might be 87 years old, the billionaire investor seems to only be getting younger with age. From having the diet of a 6-year-old full of Coca Cola and ice cream to joking around with his buddy Bill Gates, it’s no surprise that Buffett’s first tweet was so playful. So far, this has been his most retweeted and favorited post, with 42,000 re-tweets and 19,000 “likes.”

He’s an advocate for women. 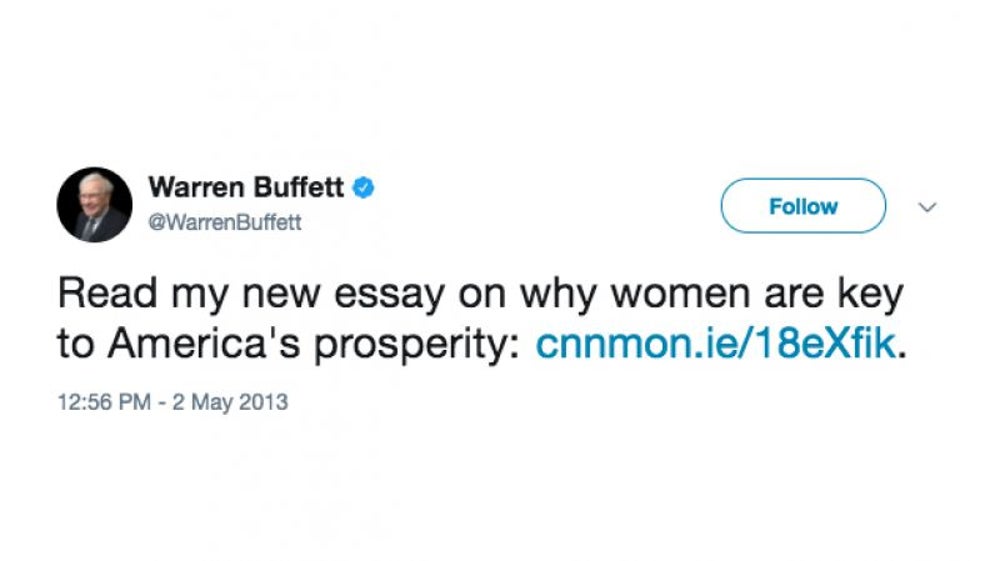 Two tweets in one day! That’s right, the same day he posted his first tweet, Buffett also posted his second one. However, this time, he used the social network to share his recent op-ed in Fortune about his views on the importance of women in economics.

Hillary Clinton is one of his “favorite women in the world.” 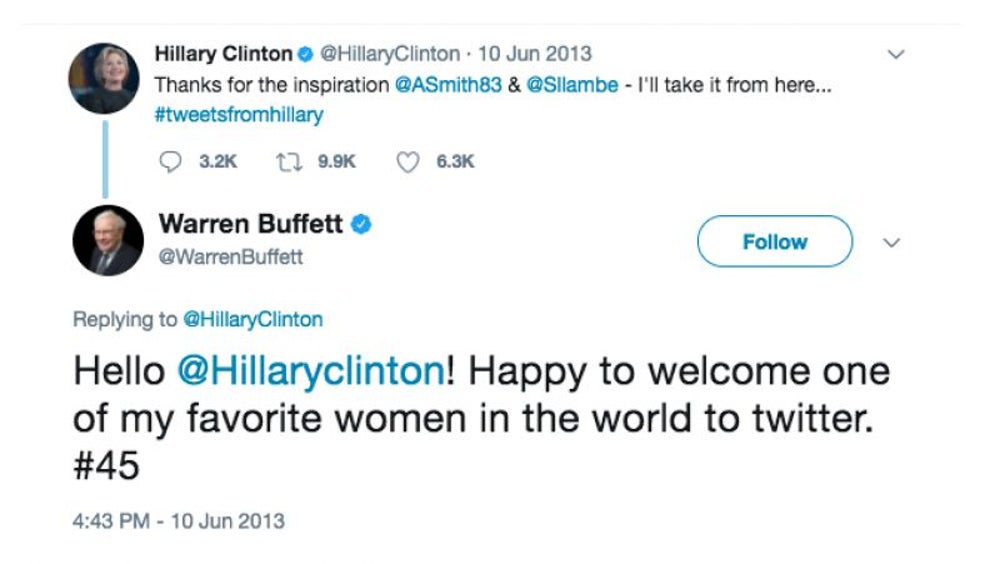 Like Buffett, Hillary Clinton was also a little late to join Twitter. In fact, Buffett beat her to it. According to a tweet reply from June 2013, Buffett wrote to Clinton welcoming her to the world of Twitter, even calling her one of his favorite women. In his tweet, Buffett uses his first-ever hashtag, #45, implying that he’d like to see her run in the 2016 election as the 45th president. 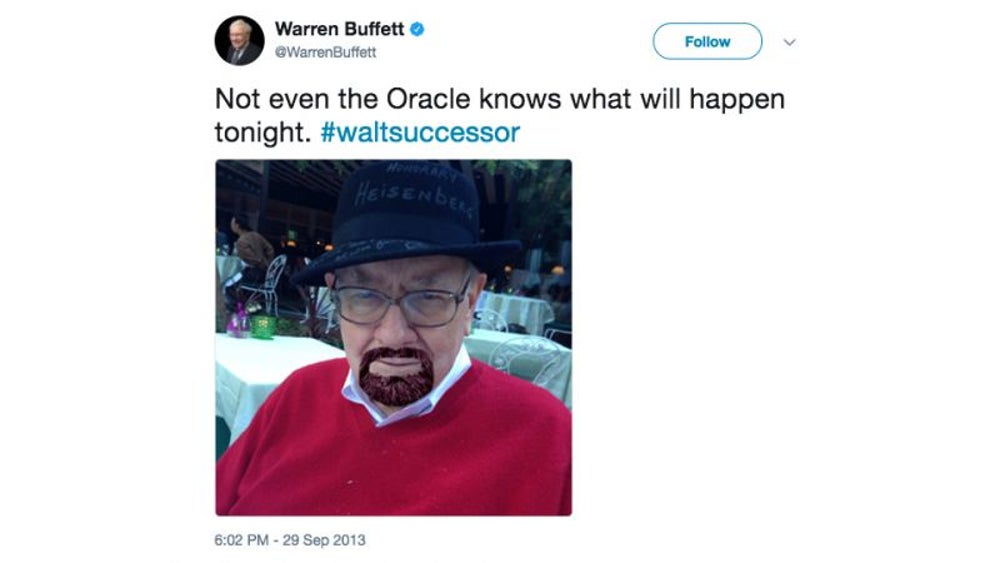 Going a couple months without tweeting, Buffett eventually posted his fourth tweet in September 2013 -- this time including a photo. In the post, Buffett shares a photo of himself dressed up as Breaking Bad’s Walter White. Not only that, but he even demonstrates his social media savviness by throwing in the hashtag, #waltersuccessor.

He shares his annual letter. 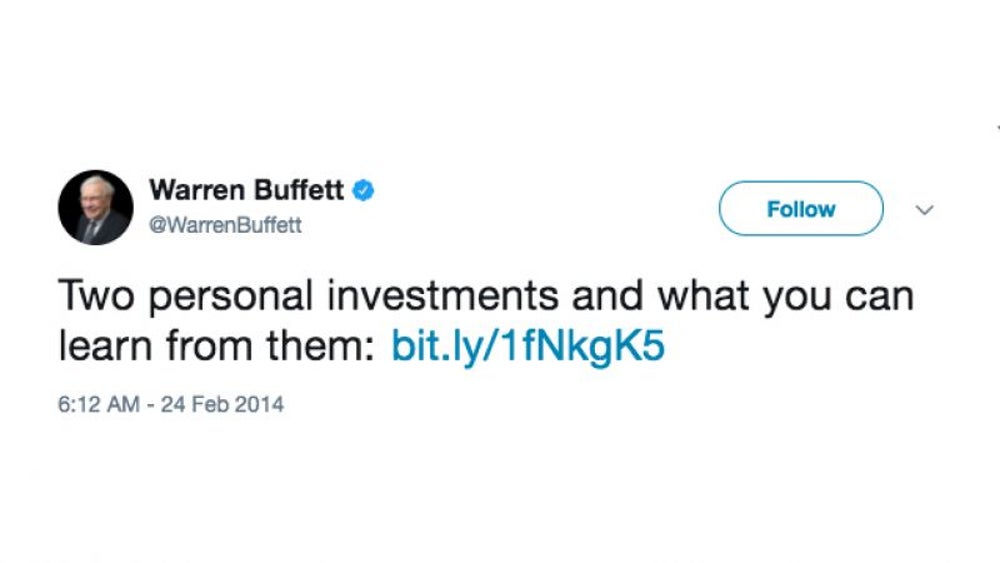 After 2013, Buffett began getting a little more serious on his Twitter. Instead of posting silly tweets, he began using the platform to promote his work and beliefs.

Every year, Buffett pens a letter to his shareholders. In February 2014, Fortune published an excerpt from the letter, which Buffett shared to his Twitter followers. In the excerpt, Buffett shares the lessons he’d learned from two personal investment experiences and offers advice to others also looking to invest so they don’t make the same mistakes. 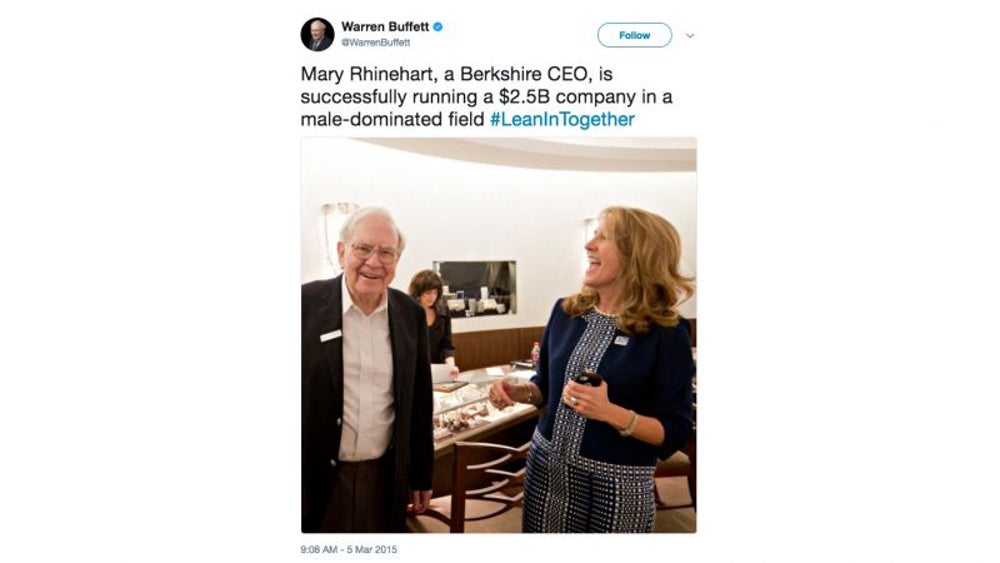 Because Buffett is so famous, it can be easy for him to overshadow his team. In fact, most people wouldn’t even be able to tell you who the Berkshire Hathaway CEO is -- or that the CEO is a woman. To change that, after a year-long hiatus from Twitter, Buffett eventually logged back on in March of 2015 to show his support for not only women in business, but Berkshire Hathaway’s CEO Mary Rhinehart.

Posting a photo of the two of them, Buffett proudly writes about Rhinehart’s success in a male-dominated industry.

He shares his views on taxes. 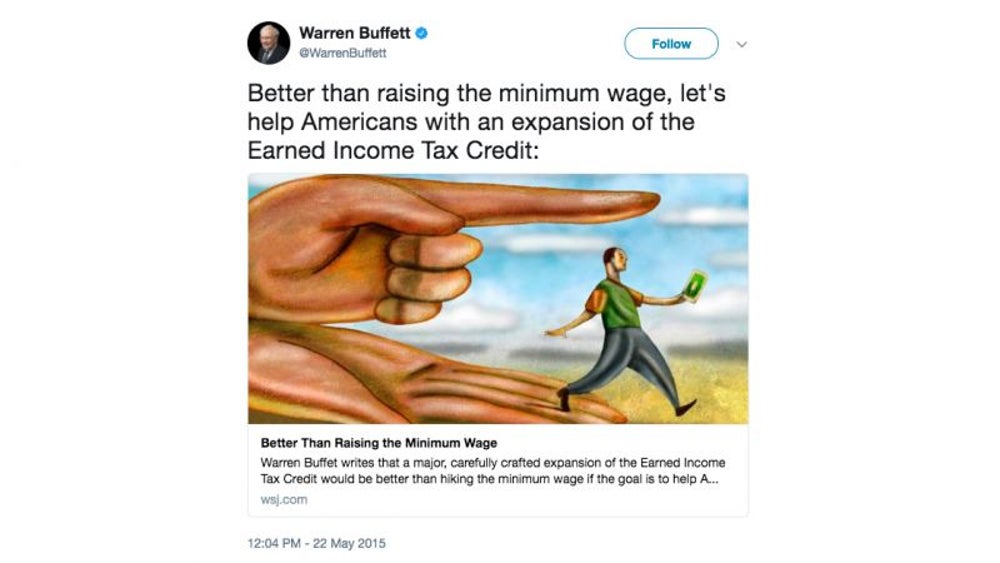 Buffett’s humble, simple and homespun approach to pretty much everything -- from money to food to social media -- sometimes makes you forget that the guy is one of the richest people in the world. With a modest home in the suburbs of Omaha and a fan of classic Coca-cola, you’d only know he’s a billionaire on paper. But when he offers financial advice, it’s probably some of the best advice you’ll receive, so don’t be fooled by his humble tone.

Every year, Buffett pens a letter to his shareholders. And in February 2014, Fortune published an excerpt from the letter, which Buffett shared to his Twitter followers. In the excerpt, Buffett shares the lessons he’d learned from two personal investment experiences and offers advice to others also looking to invest so they don’t make the same mistakes.

He promotes his livestream. 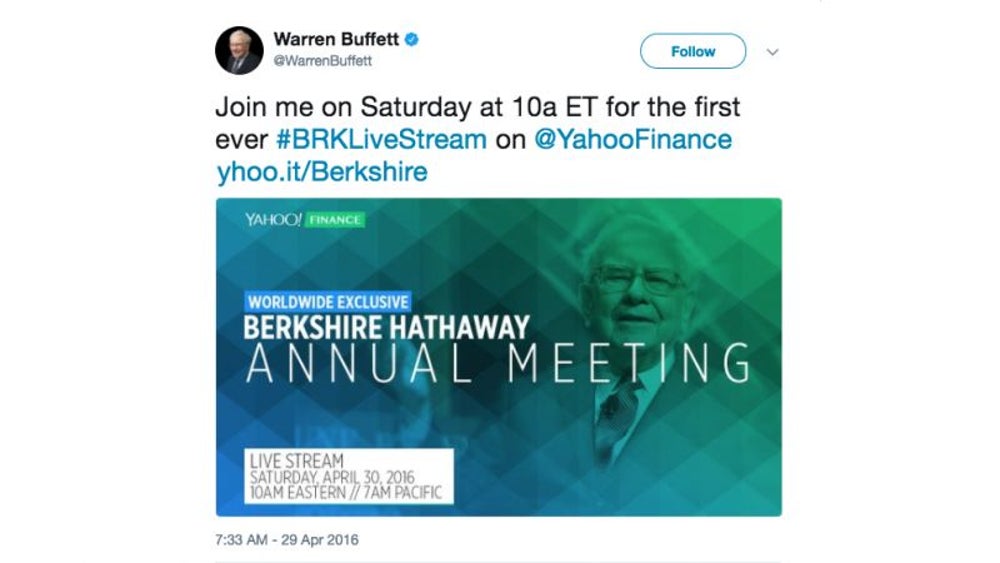 While Buffett has only used his Twitter less than 10 times, he still manages to log on when he thinks he needs to promote something. However, as a public figure and the owner of a billion-dollar public company, his work is already pretty publicized. And every year, it’s pretty well-known that Berkshire Hathaway holds its annual shareholders meeting in Omaha. In fact, just last year more than 40,000 people attended the event, with thousands others tuning in on livestream. Of course, that didn’t stop him from sharing it anyways.

He has normal friendships with other billionaires. 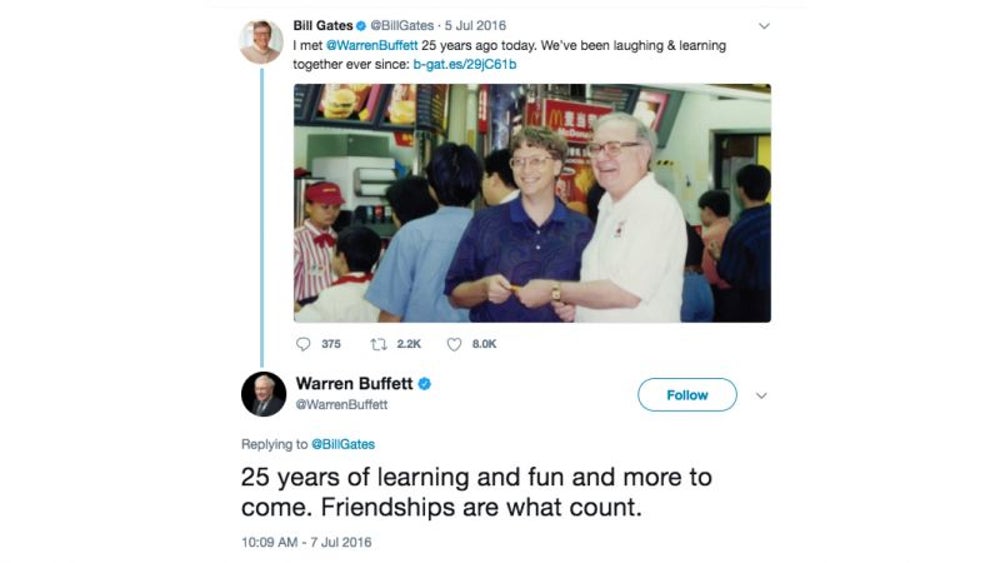 Everyone knows about the cute and fun relationship Bill Gates and Buffett has. From playing bridge to riding in golf carts, whenever the two are together, they’re having fun. And their friendship extends to social media too. In July 2016, Gates shared a photo of him and Buffett from 25 years earlier. Responding to his tweet, Buffett writes back about the importance of friendships.

That was the last we heard from Buffett on Twitter, but if he ever posts again, we'll be on the case.