With the fast increasing list of medal winners, India is marking its golden win in the 2018 Commonwealth Games in Gold Coast, Australia. After Mirabai Chanu’s world breaking six records in six lifts on the opening day of CWG2018, Indian women have outshone men in the field of Gold Coast by collecting more medals for the country. The entire nation is celebrating the moment of pride as India is sealing the medals after medals in different sports at CWG.

Entrepreneur India lists India’s golden birds that have not just mired the whole nation with their performances at CWG, but have inspired many others to be the frontrunners in sports and in their lives. 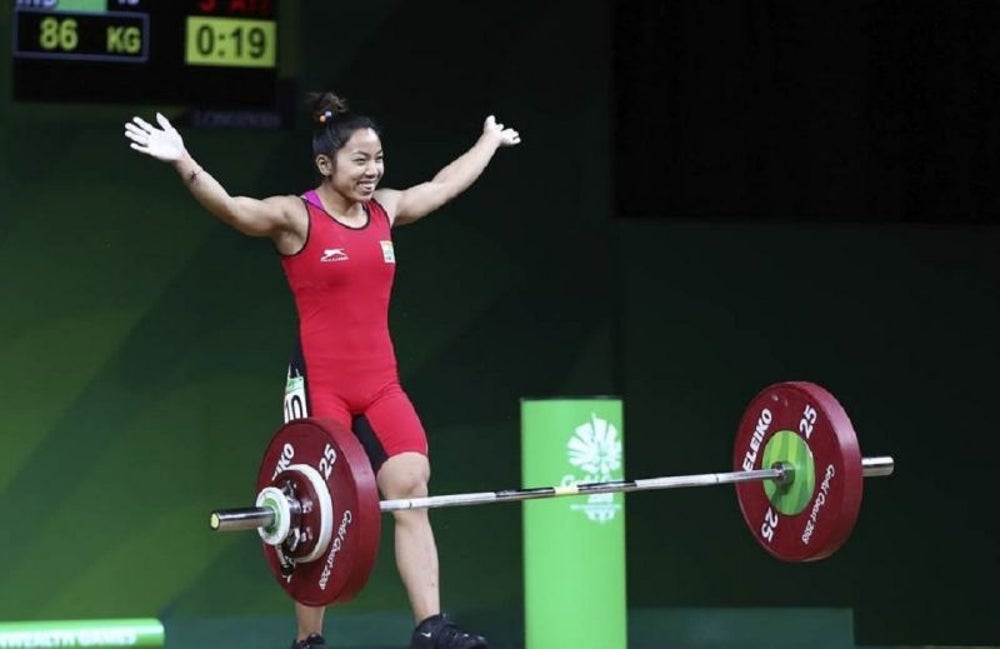 Mirabai Chanu at 2018CWG
Image credit: Twitter
Mirabai Chanu is the first world champion from India who has broken all the records after two decades of wait.  In a record breaking win, Imphal-based Chanu has set up a new national record by snatching 86kg weight in the 48 kg weightlifting round. In her next attempts she continued to maintain the highest record against her competitors and posted an impressive performance 196 kg overall in the 48kg women’s weightlifting event. She is the second medalist after Gururaja opened India’s account in the Gold Coast, Australia. 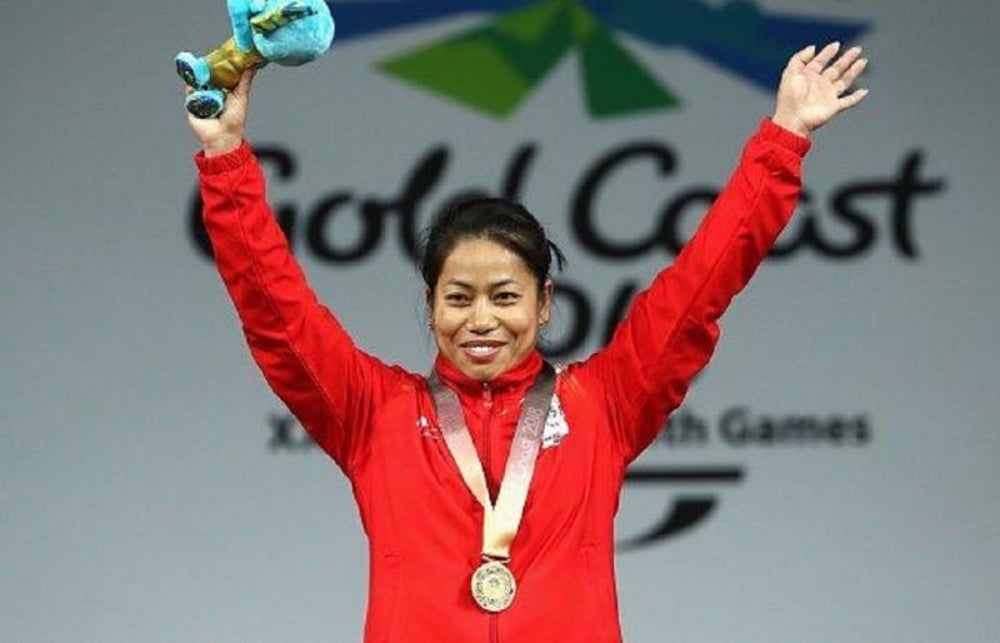 Image credit: Twitter
Another Manipuri girl, Sanjita Chanu stunned India on the second day of CWG by winning another gold medal in weightlifting. With a nagging back problem, Chanu created a new world record in women 53 kg weightlifting. She lifted a total of 192 kg weight which included the 84 kg and 108 kg weight of different rounds. With the second gold medal in India’s kitty on the second day, the whole nation was overjoyed by her exemplary performance. 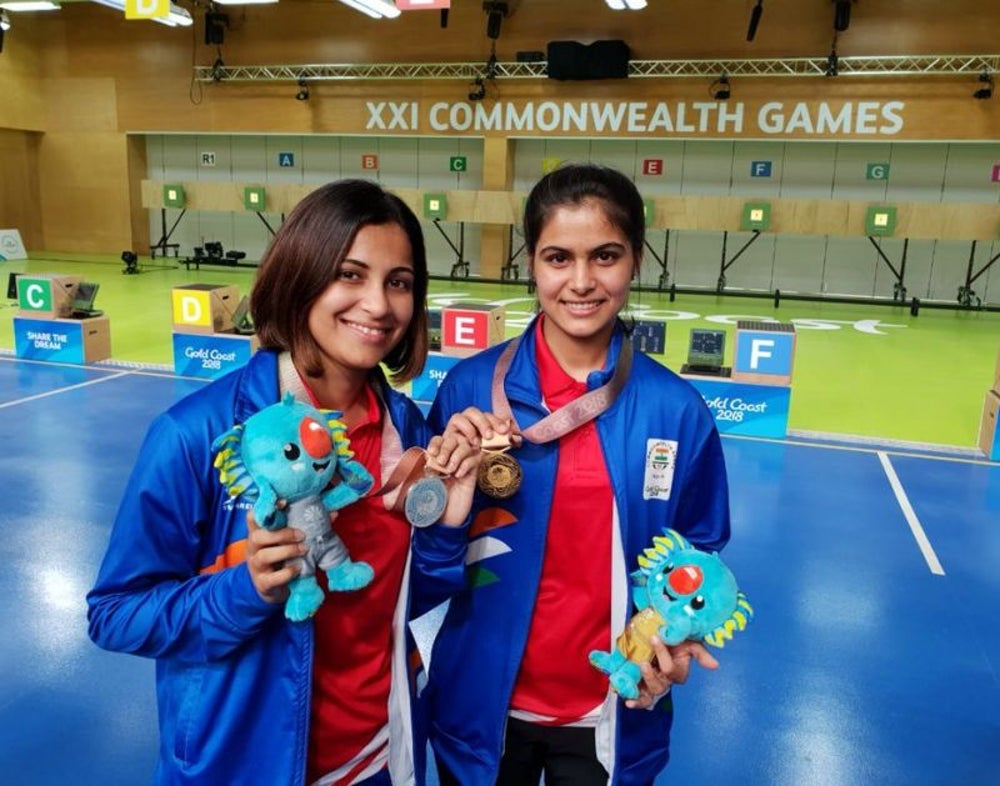 Manu Bhaker (right) and Heena Sindhu (left)
Image credit: Twitter
Indian medal tally founded an addition on the next day with another medal in shooting. The 16-year old teen sensation Manu Bhaker secured the gold medal in 10m air pistol in CWG surpassing her senior Heena Sidhu with a record-breaking win. Bhaker shot a record 240.9 m well ahead of Sidhu’s record which was 234.9m at the Belmont Shooting Centre. The youngest champ had mesmerized the whole world with her win as even the Prime Minister congratulated her on Twitter. 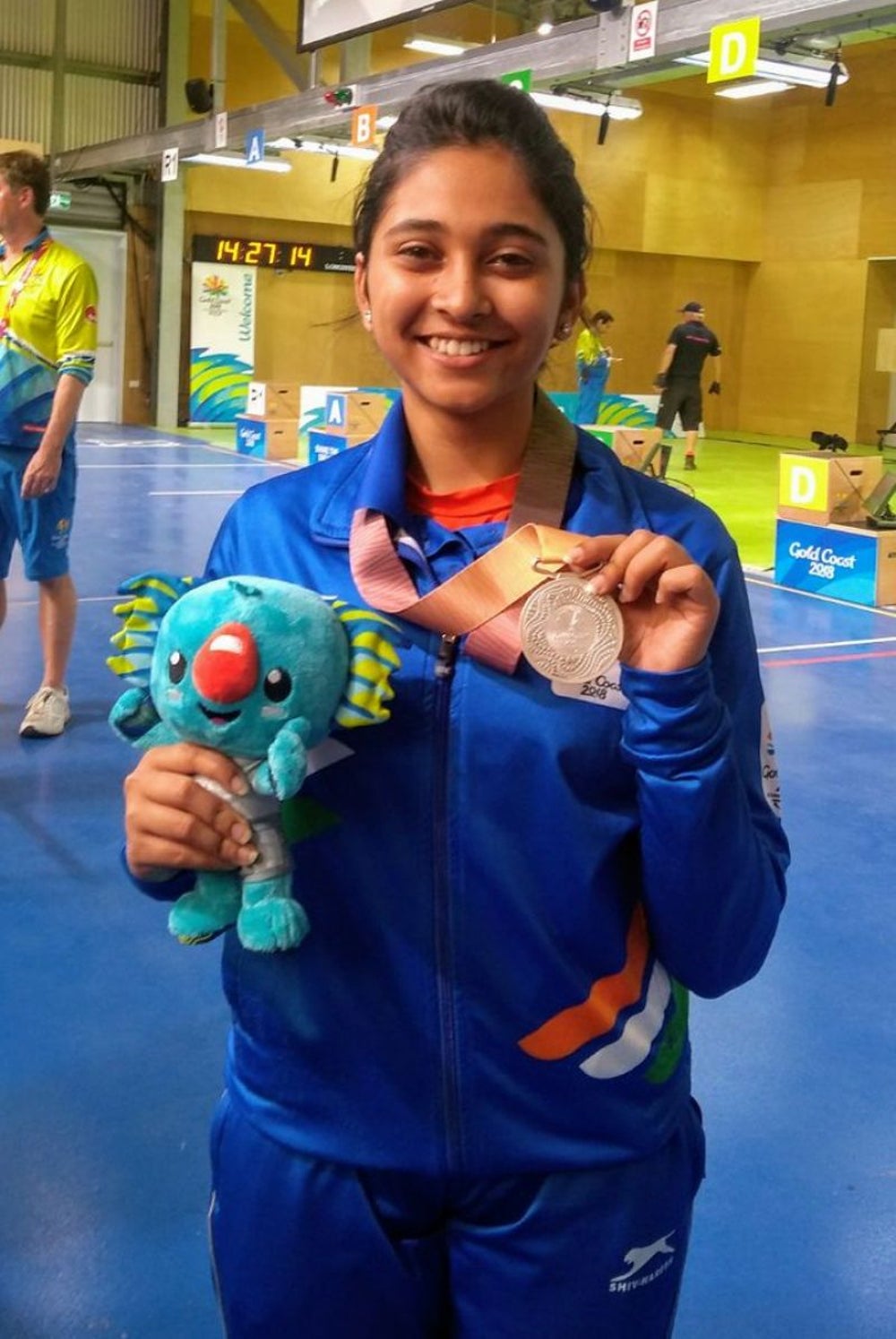 Image credit: Twitter
Another teen shooter Mehuli Ghosh secured silver medal in 10m women’s Air rifle in the CWG2018. In a riveting fight with a Singapore’s Martina Lindsay Veloso, Ghosh had to shoot a perfect 10.9 to secure her chances of winning gold in the game, which she did. She shot the perfect 10.9, and thought she has won it. But she had just tied the match with her competitor in the field Veloso. In the next shot, a little defocused Ghosh hit the 9.9 and won silver medal for India, on other hand, Veloso shot the 10.9 and won the gold medal. 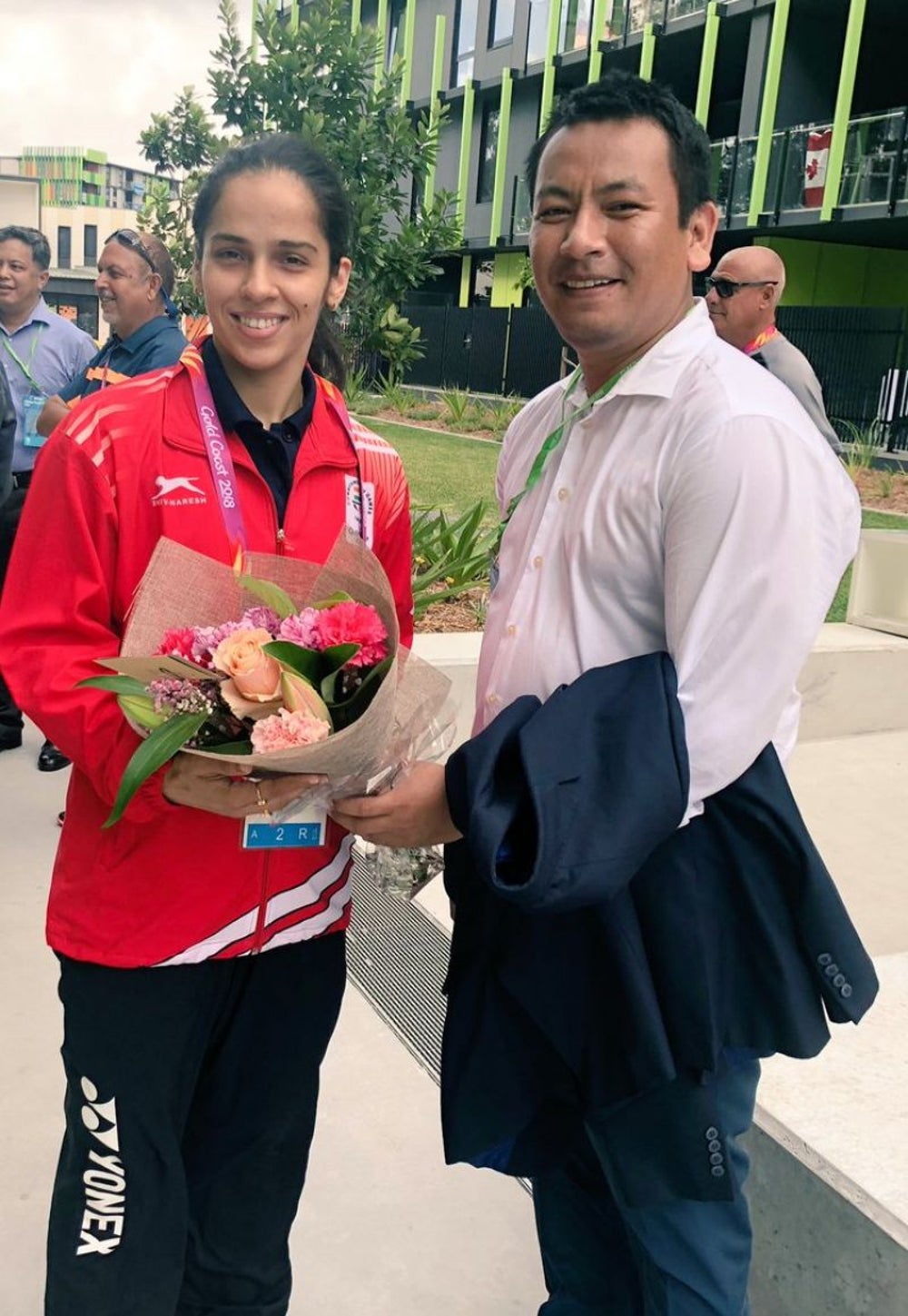 Image credit: Twitter
In the historic win, Saina Nehwal and Kidmabi Srikanth defeated Malaysian team in badminton mixed doubles at CWG2018. This is the country’s first mixed team badminton medal at any edition of CWG. Saina had also won gold in the 2010 CWG in New Delhi and mixed team silver and bronze in 2006 and 2010, respectively. 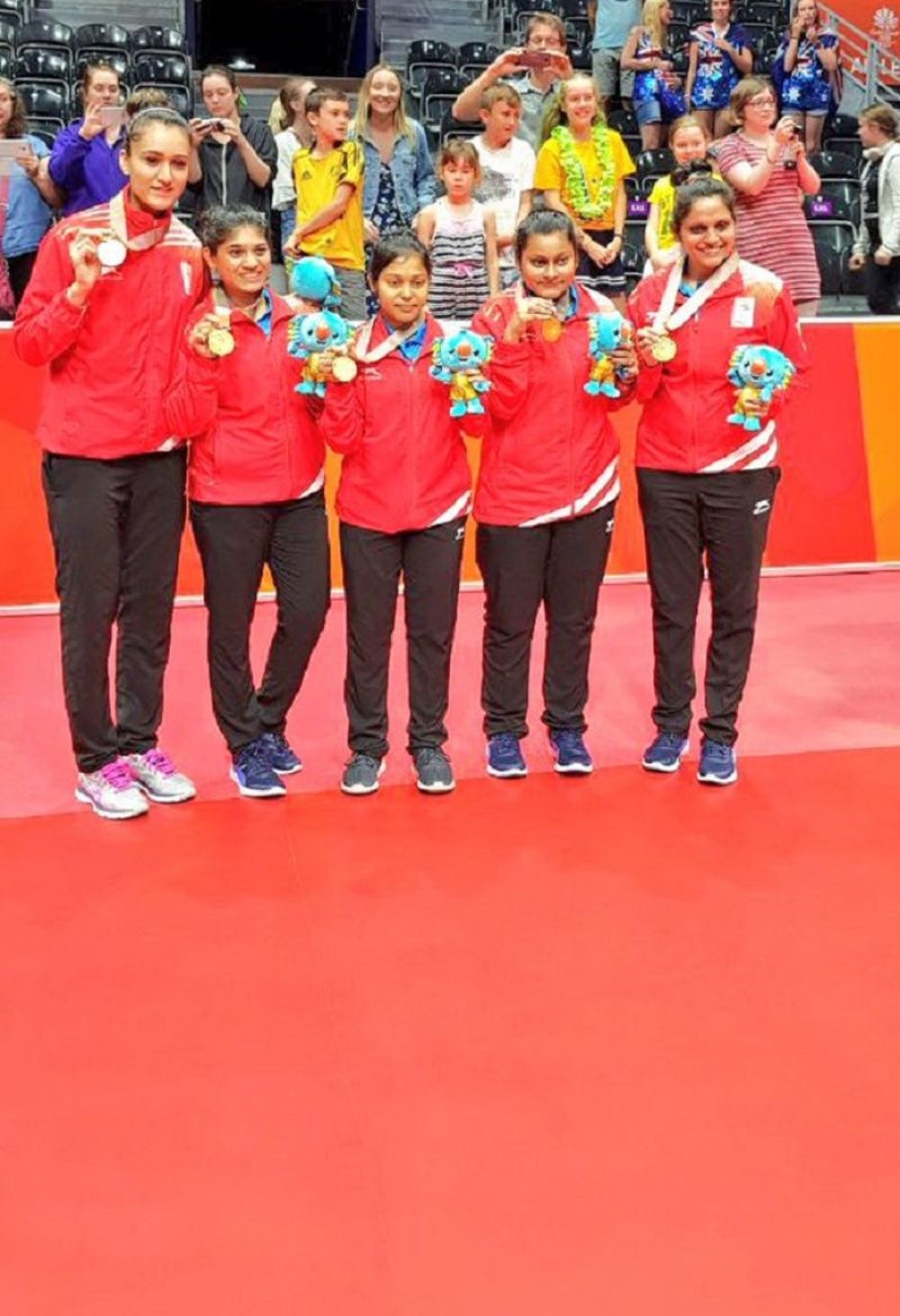 Image credit: Twitter
India scored 3-1 victory over four-time champion Singapore in the women’s table tennis finals. World number 58, Manika Batra recorded her glorious win in the singles finals defeating Singapore’s Yhian Zhou in an unthinkable game. The team of Singapore had never lost the Commonwealth games in women’s TT singles since the sport was inducted in 2002. Besides, Batra’s historic win, Mouma Das and Madhurika Patkar also created a history by winning doubles in Table Tennis against the Singapore team. 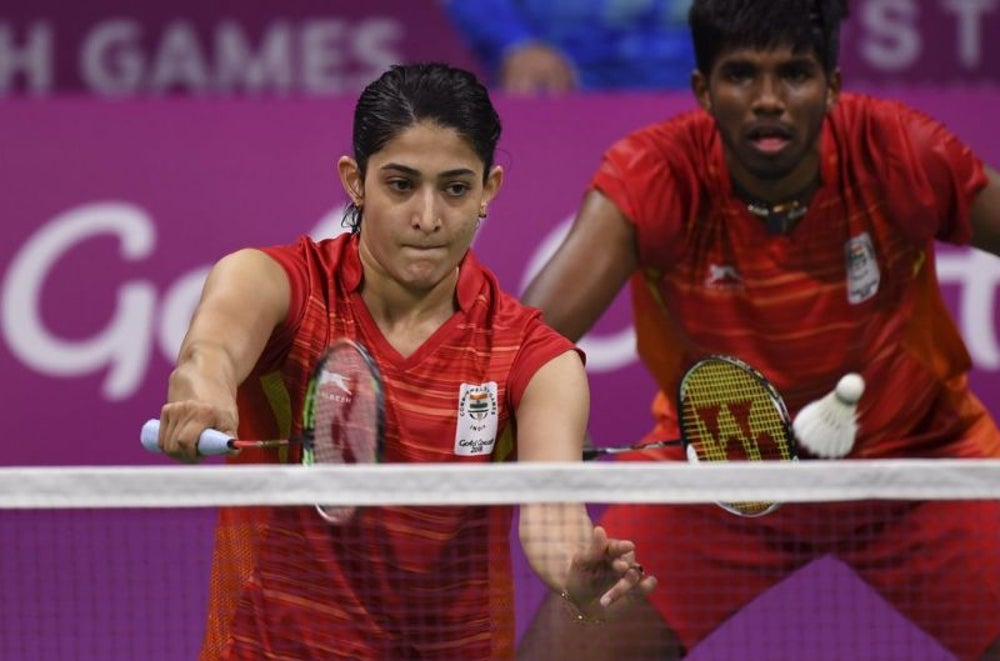 Image credit: Twitter
Defeating opponent team of Malaysia, Ashwini Ponnappa secured the gold medal with Satwiksairaj Rankireddy in the Badminton mixed doubles. In an interview with a daily news portal, Ponnappa revealed how CWG is her top favorites among all the sports leagues. This is the third successive time when Ponappa had won the medal for India. Before 2018CWG, Ponnappa had opened her medal count by winning women’s doubles with Jwala Gutta in 2010 CWG. In 2014, four years later, she claimed the silver medal in Glasgow CWG. 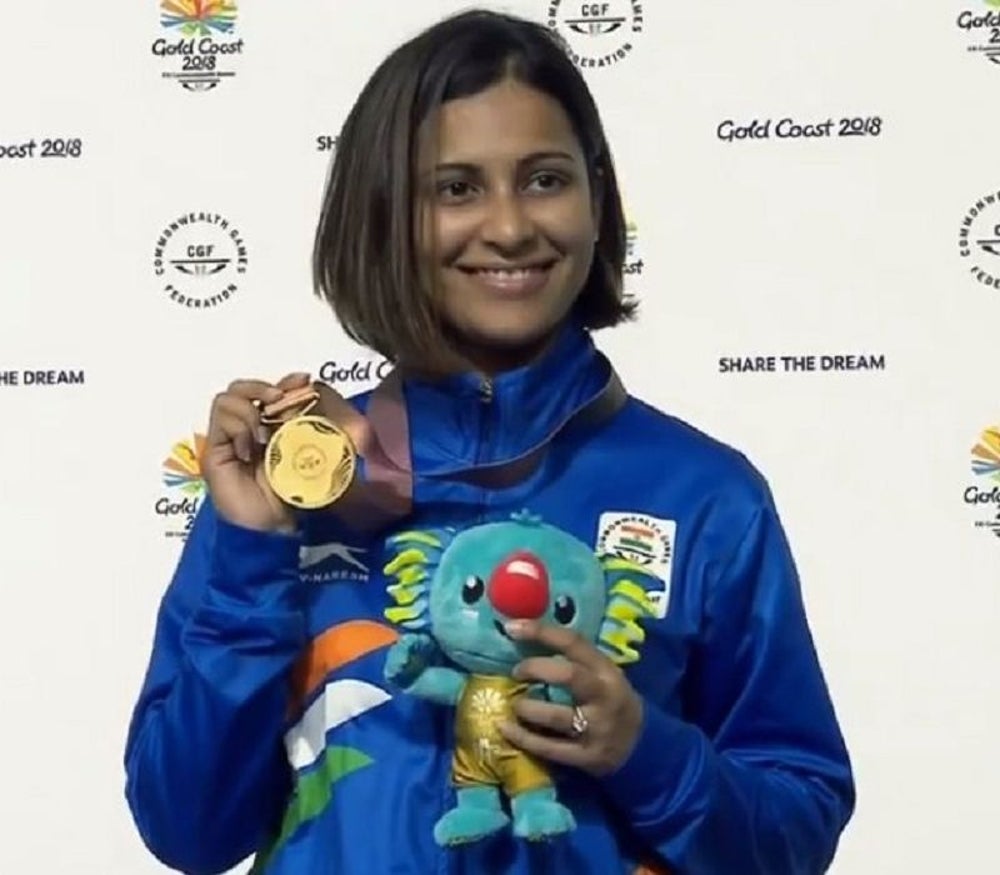 Image credit: Twitter
Overcoming all the obstacles in her path, Heena Sidhu, India’s ace shooter won the silver medal for the country in 10m air pistol at 2018CWG. The two times Olympian Sidhu had a nerve injury in the trigger finger last year, which had not healed, but overcoming all the pains and pressure, she secured the silver medal with all her glory and grace. In 25m air pistol, Sidhu broke the Commonwealth record by winning gold with her outstanding performance. 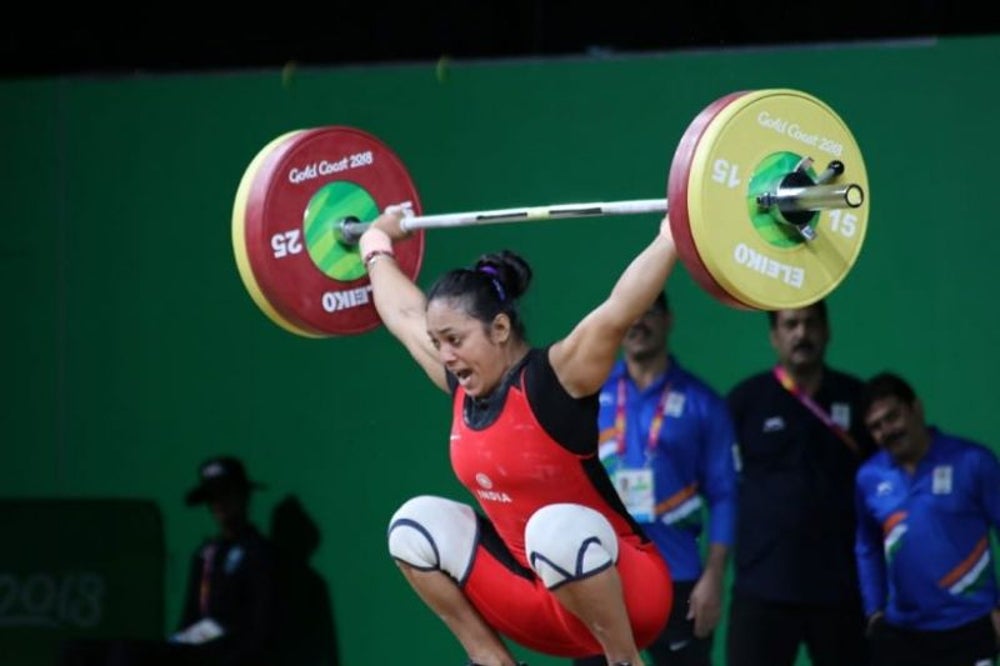 Image credit: Twitter
From the by lanes of Varanasi to Australia’s Gold Coast, Punam Yadav has braved all odds to add another gold in India’s kitty. A farmer’s daughter, Punam clinched the fifth medal for India by winning women’s 69kg weightlifting event. The 22-year old had earlier won bronze in the 2014 Glasgow weightlifting event. Improving her performance, she marked her success this year by lifting 95, 98 and 100 in the snatch, and then 118 and 122 in the clean & jerk to finish on 122. 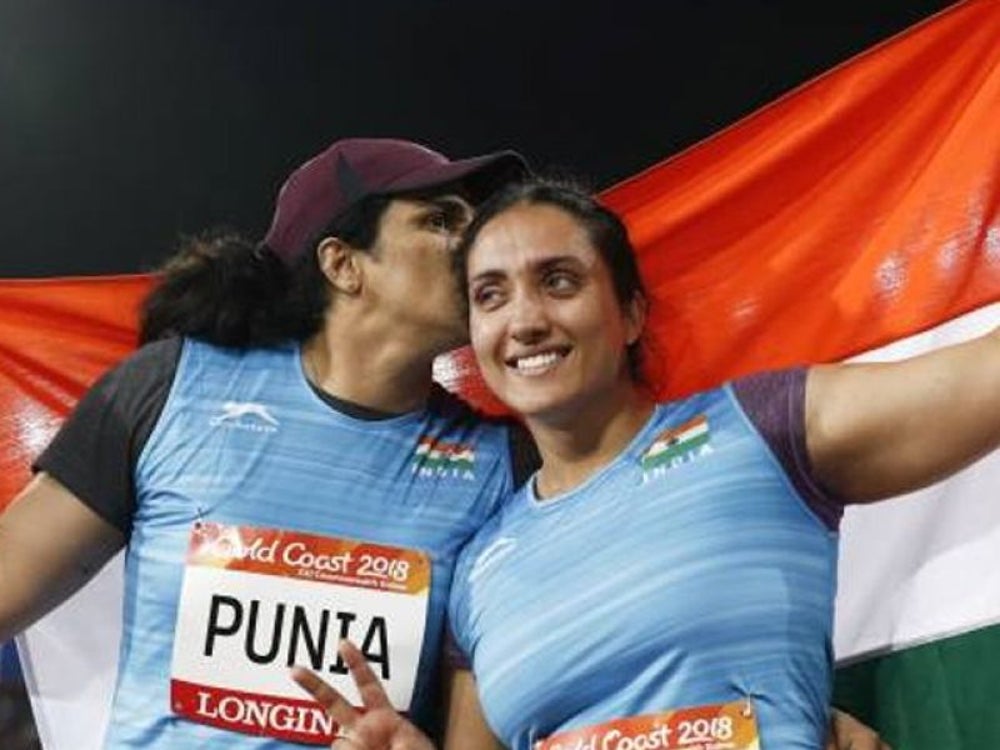 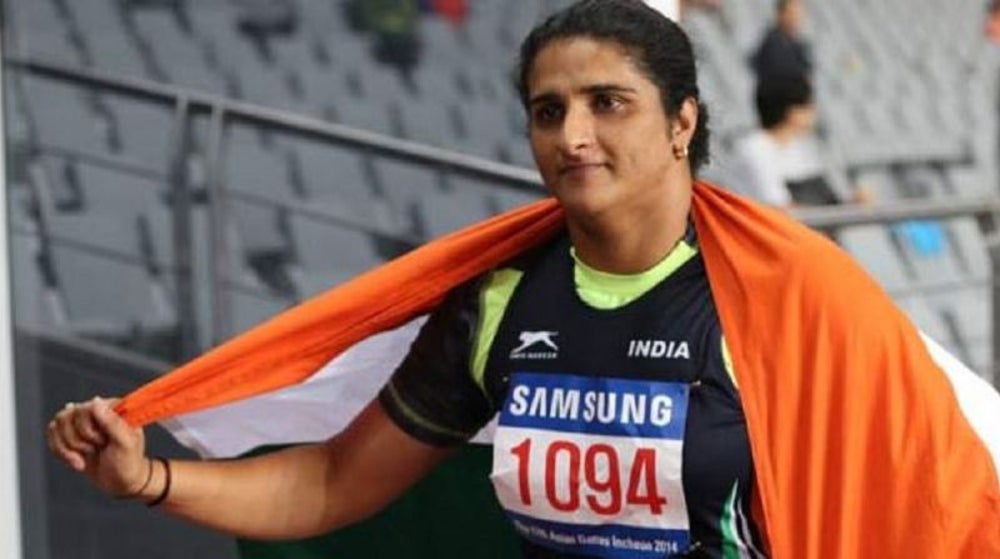 Image credit: Twitter
India’s forward athlete in discus thrower, Seema Punia won silver in the 60.41m discus throw event at CWG. Hailed from Haryana, the 34-year old Punia began her career in sports when she was just 11. Punia was named ‘Millennium Child’ when she clinched the gold in World Junior Championship for discus throw. Since then, there was no looking back for her. Punia went on to win silver medal at 2006 CWG. In 2010, she won the bronze in discus throw. Also in fact, in 2014 Commonwealth Games, she had won the silver medal. 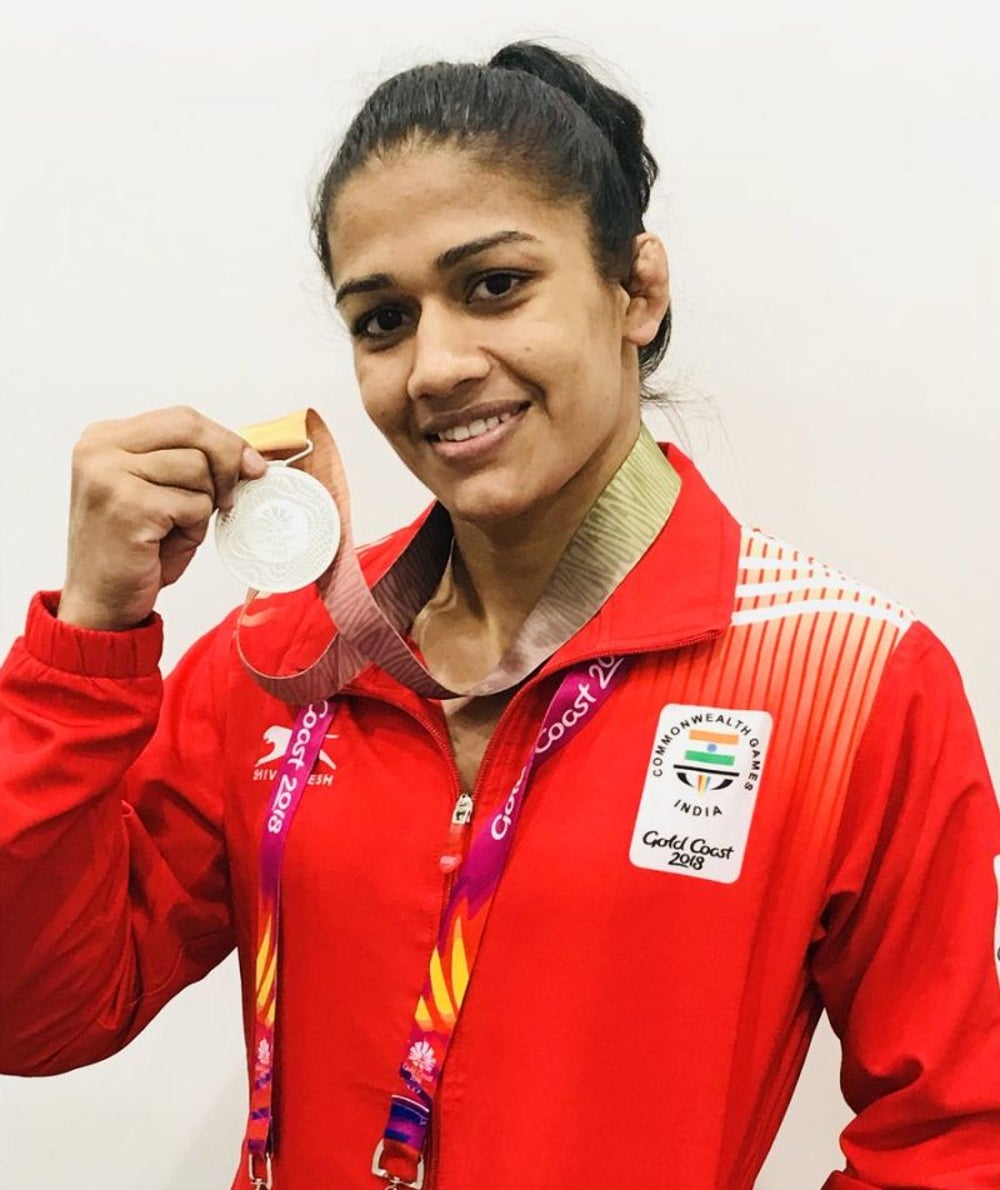 Image credit: Twitter
The famous Phogat sisters can be recognized by anyone in India. After Geeta Phogat’s exemplary performance 2014 Commonwealth Games, her younger sister Babita Phogat secured silver medal in women’s 53kg freestyle wrestling event at 2018 Commonwealth Games. Haryana-based Babita’s is an inspirational tale for many athletes in India. She made the whole India proud by her outstanding performance at freestyle wrestling. 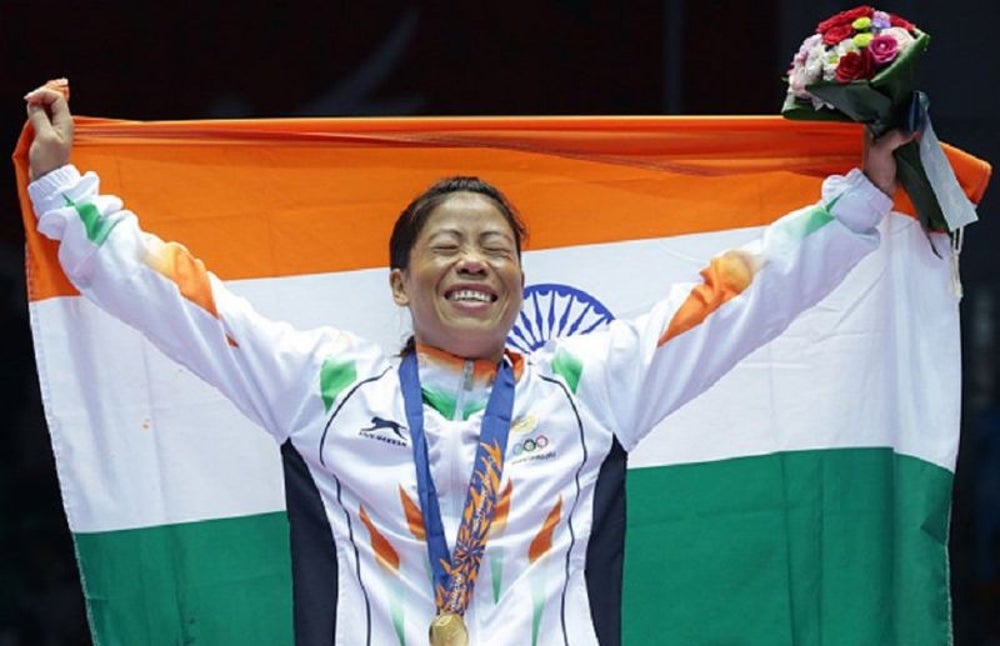 Image credit: Twitter
The five-times boxing world champion Mary Kom clinched gold for India in the (45-48kg category) boxing in 2018 Commonwealth Games. After the magnificent win, Kom shared her feelings on Twitter saying, "She dedicates her medal to her three children, coaches and sports staff for believing in her."  Kom made a stunning comeback after the sabbatical of two years in boxing. Over the years, she has not just brought India's name on the top of the world in boxing but has also trained many young boxers through her academy as a trainer and an entrepreneur. 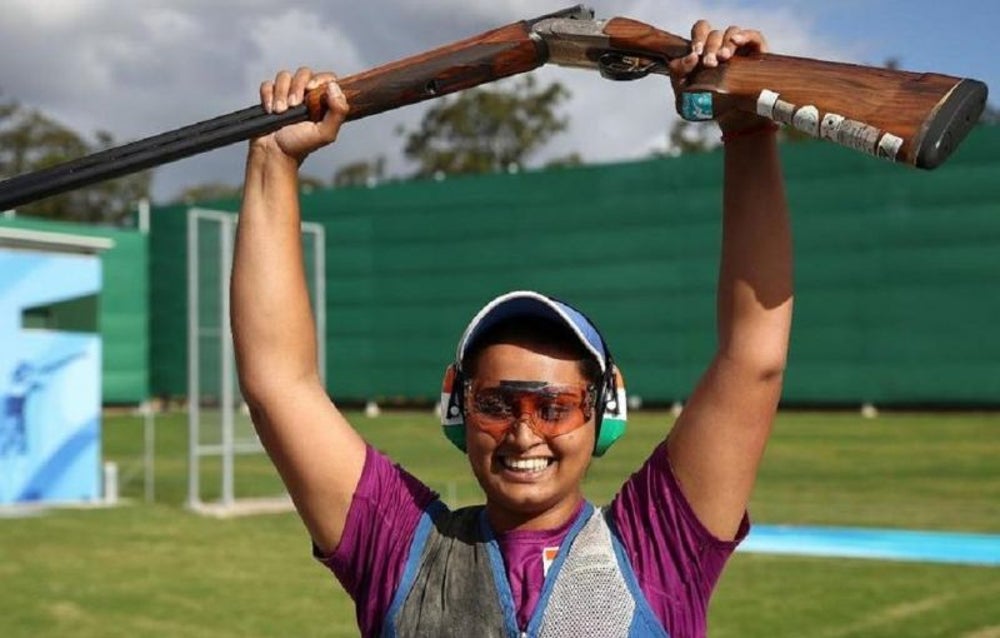 Image credit: Twitter
The 27-year old Shreyasi won gold in shooting for India in 2018 Commonwealth Games. Singh shot 96 in the finals with her excellent shooting to win women’s double trap shooting. While Shreyasi won the silver medal, another Indian shooter Varsha Varman won third position after three rounds in the same game. The Delhi-born Shreyasi had also won the individual silver medal in double trap in Glasgow and followed that by winning a bronze medal at the 2014 Asian Games in Incheon. 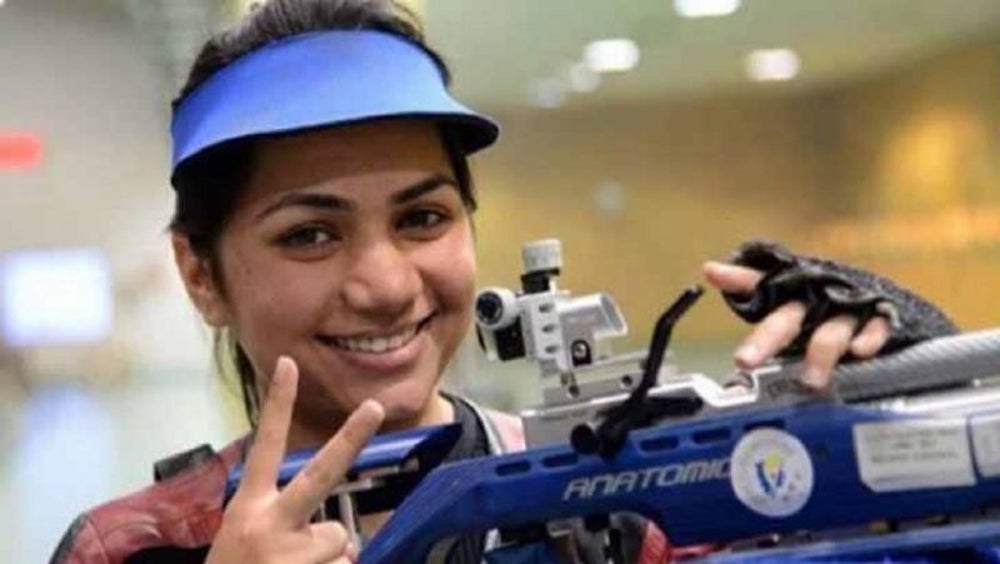 Image credit: Twitter
In the 10m Air Rifle women’s final, an Indian shooter Apurvi Chandela finished third in the 2018 CWG. Chandela had also secured gold at the 2014 Glasgow Commonwealth Games in a record-breaking win. Hailed from Jaipur, Chandela was inspired to take gun in her hands at age 15 when Abhinav Bindra clinched gold for India in Beijing 2008. From then, she made shooting her focus and gradually went on to bring more medals for India. 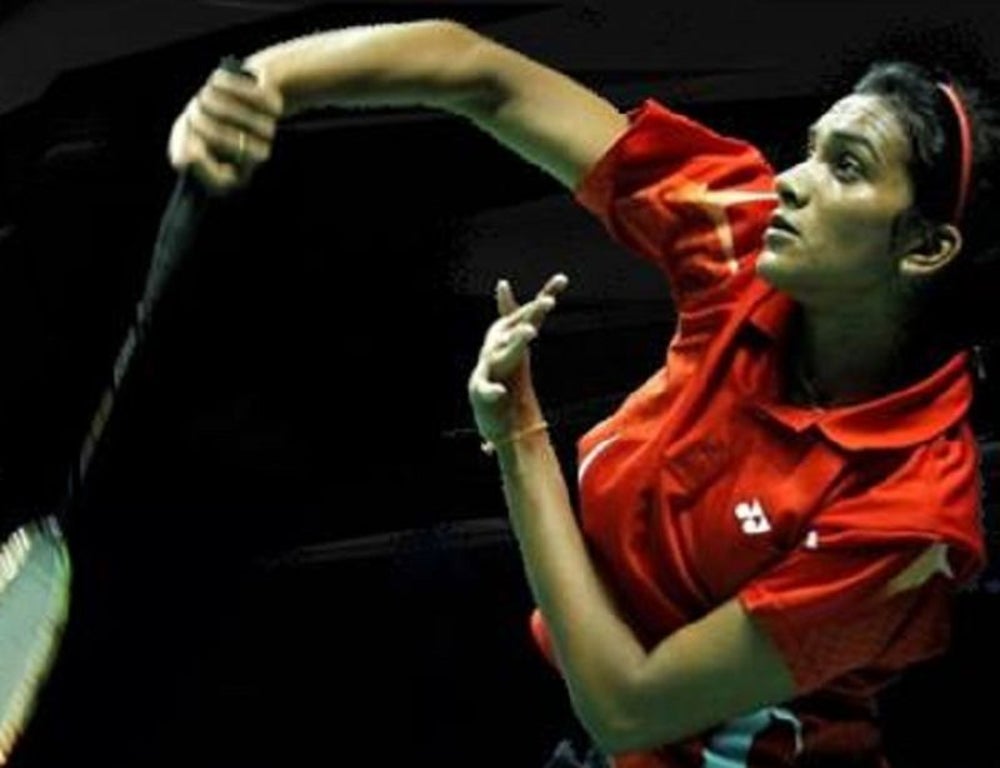 Image credit: Facebook/PV Sindhu
The women’s singles at 2018 Commonwealth Games in Gold Coast caught the eyeballs of people across the country when the two badminton champions were on the field competing against each other. Saina Nehwal and PV Sindhu were the central attraction on the last day of CWG. PV Sindhu won silver medal in the women’s singles losing against gold-medalist Saina Nehwal.
Related Books