Coronavirus: 9 Facts That Proves the Pandemic Has Got India Glued to Their Screens Like Never Before

The nationwide lockdown to combat Covid-19 has turned everyone's life upside down. With no mode of entertainment and print newspapers in slow circulation, India has found its new companion.

The screen-time on tabs, TV, and phone screens have increased noticeably. Vision has become a source of information and entertainment. The lockdown has impacted every sector in India but is certainly a booster for television broadcasters. According to the latest BARC-Nielsen study on Covid-19 and its impact on TV and smartphone landscape, the time spent on it during week 1 of the pandemic has increased by 1.5 hours, a gain of 6 per cent.

The study revealed interesting statistics on what and how India is consuming virtual entertainment. While this might be a disaster for most of us, it is somewhere boosting the viewership for television and other online platforms.

Here are the key highlights: 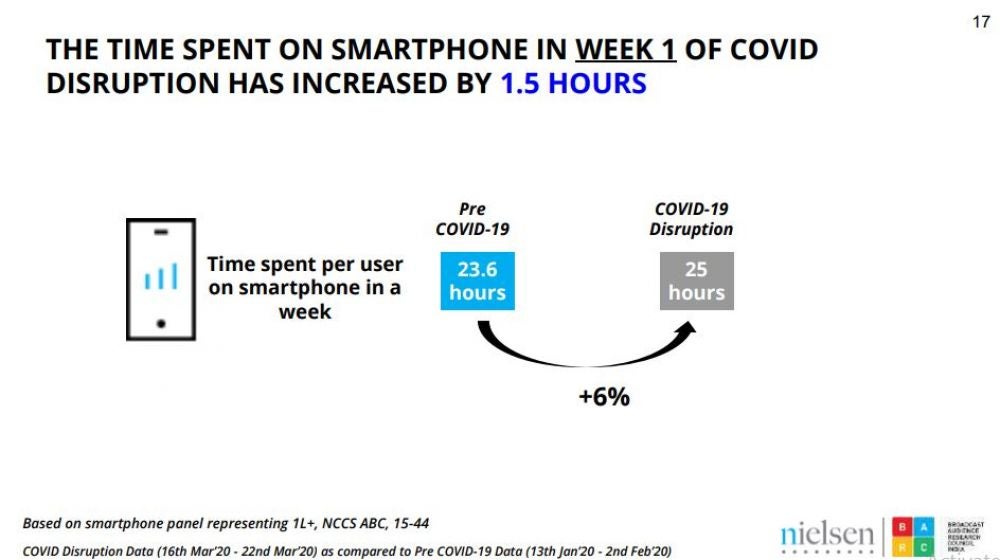 The time spent on it in the first week of the lockdown has increased by 1.5 hours from 23.6 hours in pre-Covid times to 24.5 hours post-Covid disruption. 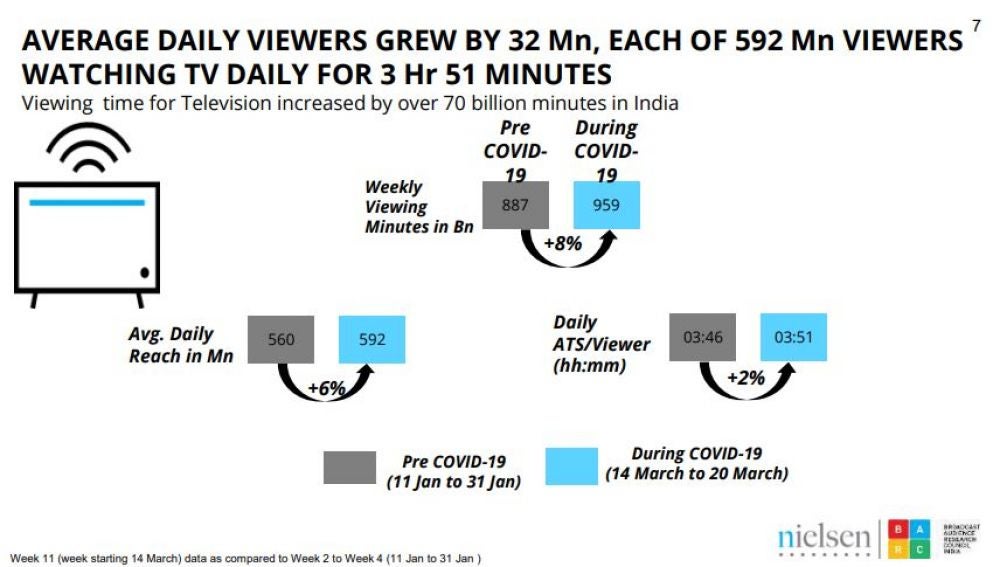 3. What Was India Watching: 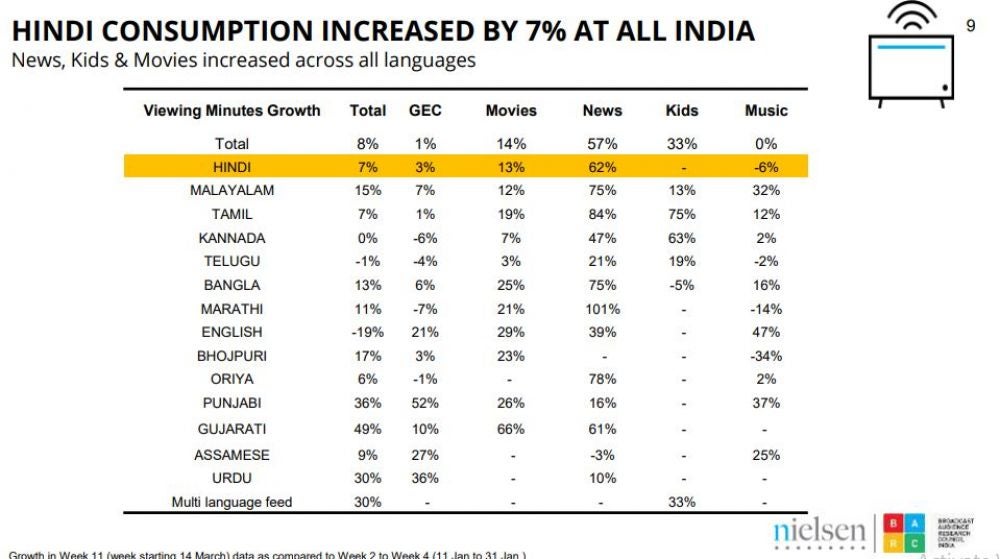 News channels saw a 57 per cent growth and kids genre with 33 per cent growth. Movie channels grew by 14 per cent while general entertainment channels (GEC) hardly saw a percentage growth. While the English speaking channel dropped by 19 per cent, Hindi consumption grew by 7 per cent. 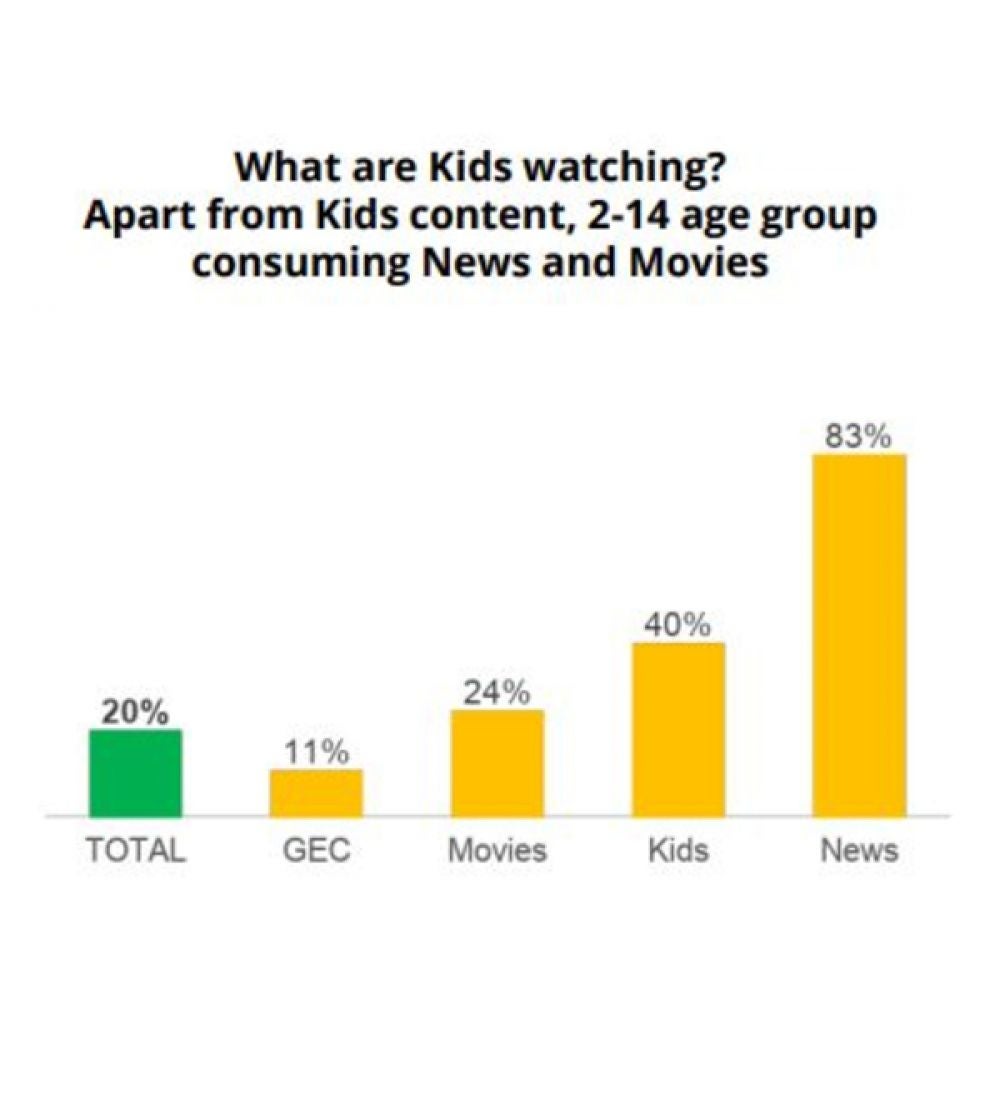 Image credit: Nielsen and BARC
The people among 2-14 years age group recorded the highest increase in viewership by 20 per cent. It's also interesting to see that the same age group is also spending a lot of time watching news and movies.

5. The City Gets Active: 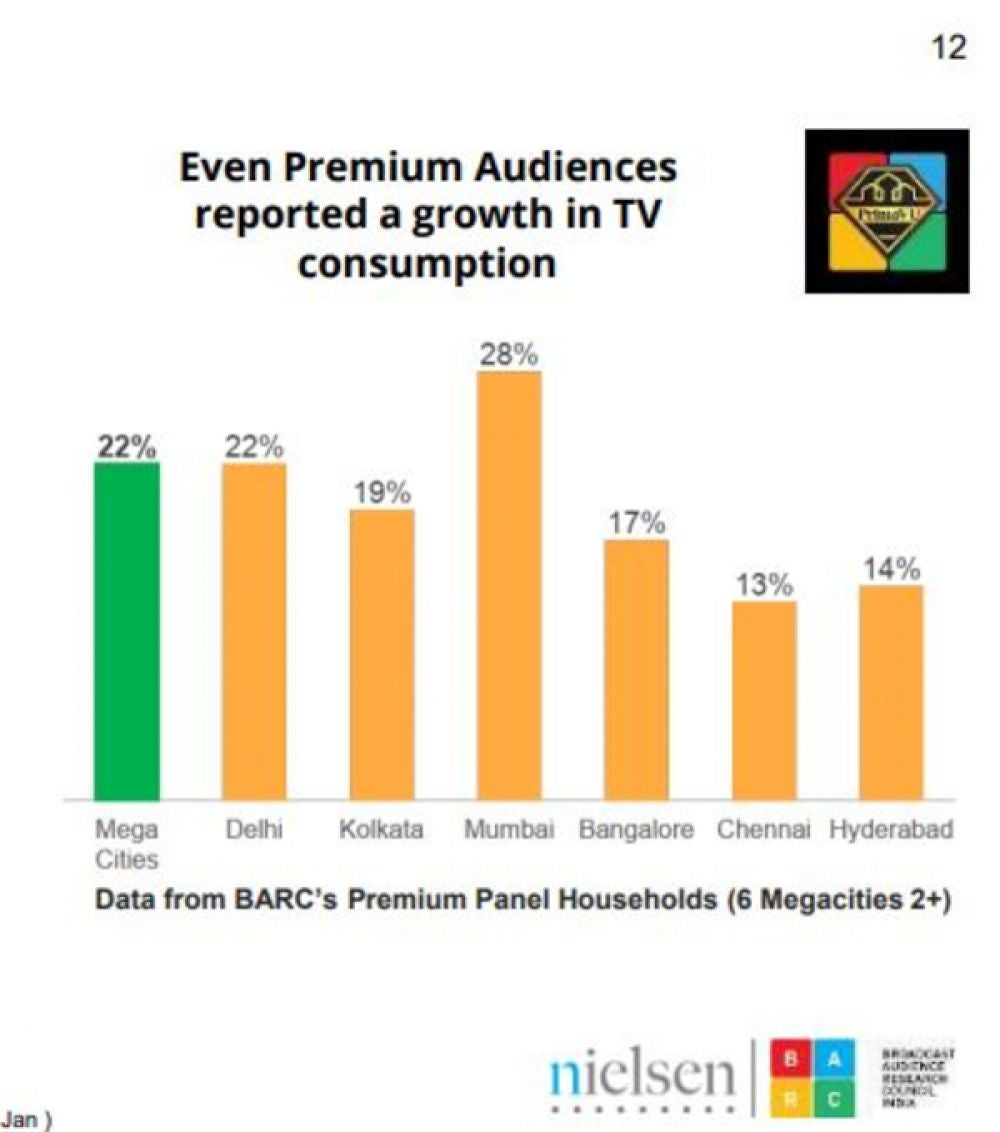 There has been a 22 per cent increase in viewership in the metropolitan cities. In Mumbai its 28 per cent growth and in Delhi its 22 per cent. The increase is special during the non-prime time (8:00-17:00) as people are working from home. 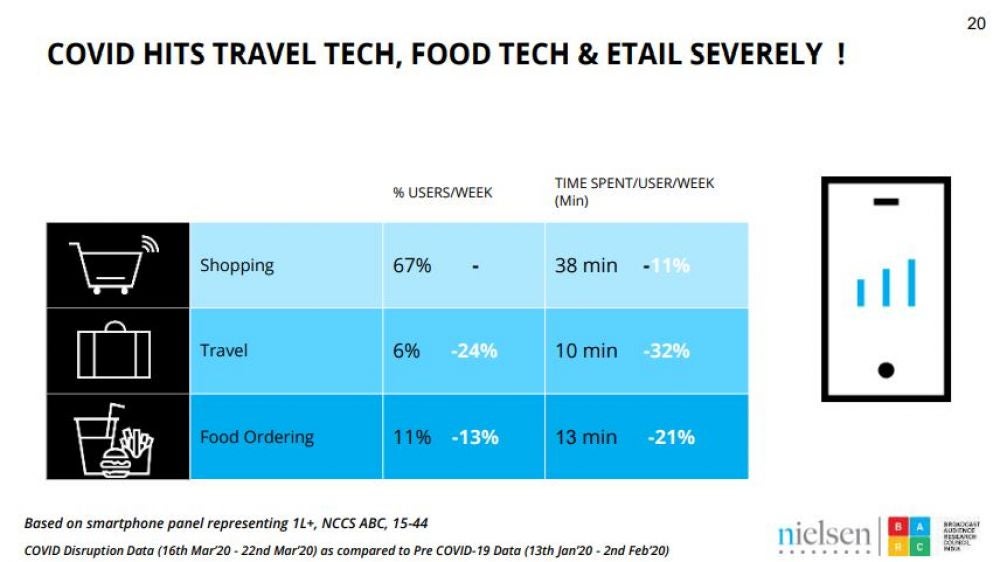 7. Self Isolation Is Social Activation: 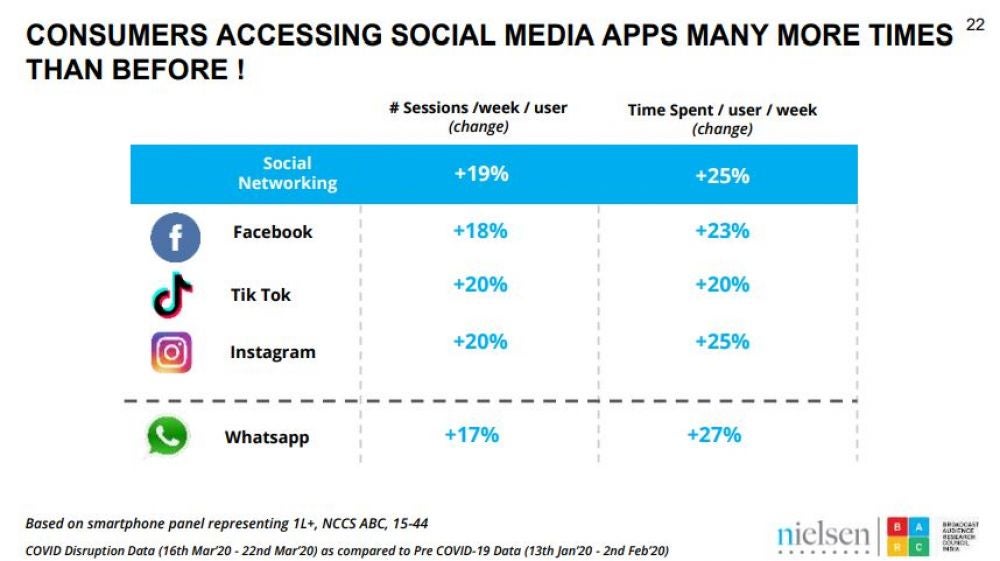 Consumers are more active on social media apps than before and spending more time online. The time increased by 25 per cent. The stats below show the time spent per user per week on different social media platforms like on Facebook by +23 per cent, TikTok by +20 per cent, Instagram by+25 per cent and Whatsapp by +27 per cent.

8. Breaking All The Records: 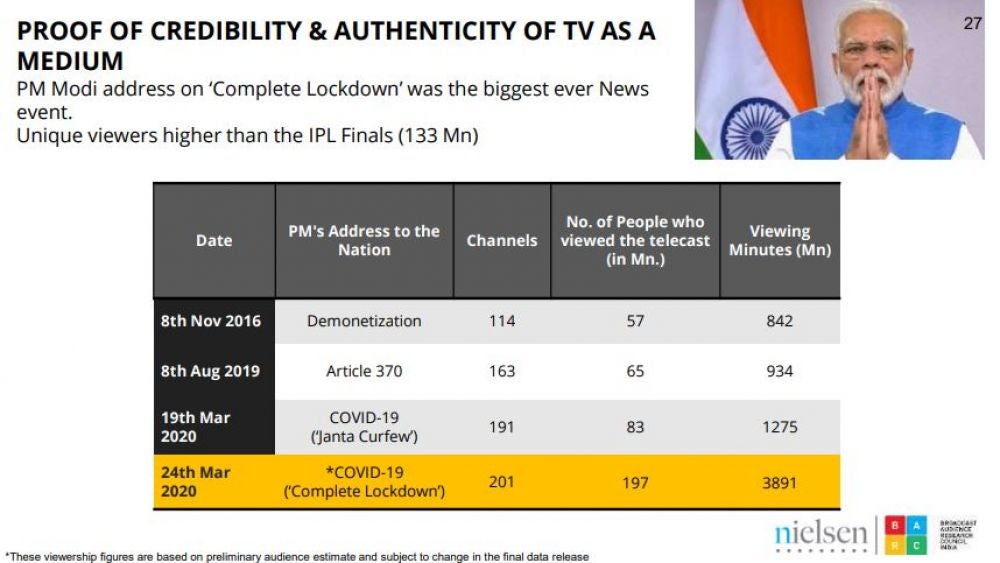 Making new records and breaking all was Prime Minister Narendra Modi. On March 24 when PM Modi addressed to the nation and announced the 21-day lockdown, it was watched by 197 million viewers. The number makes it the biggest single event on TV so far. 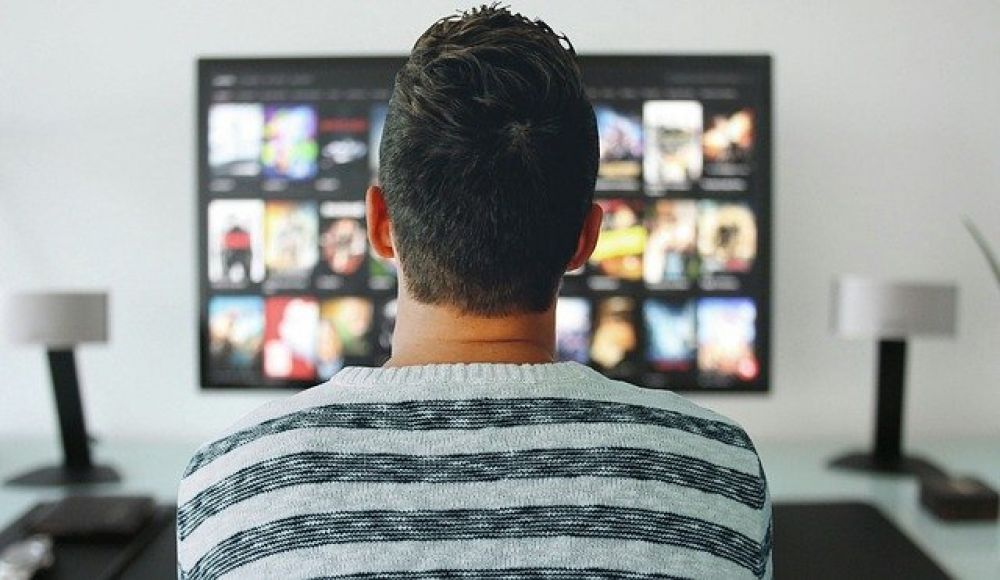 Television and smartphones has become India's new favorite mate. The lockdown saw a huge increase in both TV and digital consumption.

The amount of time spent on social media also increased by a significant number. While e-commerce, travel, food saw a huge dip.

An entrepreneur Sells His Restaurant for $1 in the United States

COVID-19 vaccine: Which is the most effective

Sputnik V is 91.6% efficient, according to The Lancet