Amanda Hesser and Merrill Stubbs are tapping into the mad enthusiasm of home cooks.

October 19, 2009
This story appears in the November 2009 issue of Entrepreneur. Subscribe » 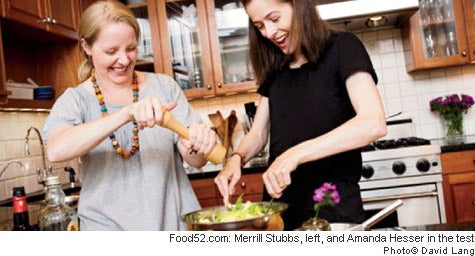 Say you started a food website. Nothing radical there. Say you started a food website that held weekly recipe contests, like a global county-fair cook-off. Say you raised the stakes and told the cooks that winners would have the glory of being published in your next cookbook. Say all of that provided enough buzz that suddenly, you had a two-cookbook deal with a major publisher, 4,000 registered users on your website, a corporate sponsor, an online store in the works--and you didn't even have to write a recipe.

That, in a nutshell, is what Amanda Hesser and Merrill Stubbs have pulled off --in one of the most brutal publishing economies in decades.

Hesser, a cookbook author and columnist at The New York Times Magazine, and Stubbs, the food editor at Herb Quarterly, launched Food52.com earlier this year. Each week, cooks submit recipes in a specific category, such as Your Best Frozen Dessert or Your Best Fried Chicken. Hesser and Stubbs choose two finalists, demonstrate them in funny videos shot in Hesser's Brooklyn kitchen and let the site's users vote on a winner. Finalists receive a copy of the book, plus "a bounty" of cooking tools from Oxo, the site's sponsor. Down the road, they plan to open an online store selling food, cookbooks and tabletop items. Users will get a discount; Food52 will collect a commission.

And when the book is published, possibly by the end of next year, there is a ready-made market for it (boxes on the site even encourage users to pre-order). Genius.

The idea for Food52 came out of testing some 1,200 recipes culled from the Times' archives for a cookbook that Hesser is writing. At some point--Recipe 452? Creamed rutabagas?--Hesser realized that the best of them came from home cooks. "We also noticed that online there are a lot of really good food websites, and the one thing missing seemed to be a place that celebrated home cooks, where home cooks could have a voice," she says.

Food52.com doesn't just capitalize on the current mania for competitive cooking, it also provides an outlet for kitchen exhibitionism, giving participants a chance to show off their own cooking videos and video tours of their kitchens. Meet KelseytheNaptimeChef, a food blogger and mother whose delicate, buttery lemon-zucchini cookies won in its category, and Lastnightsdinner, a patent assistant in Boston by day and a food blogger in Providence, R.I., by night, who grilled up some winning pork burgers with fennel-red cabbage slaw.

At a time when how to make money on the web remains a mystery to most, Food52 has found an elegant, seemingly effortless answer. And Hesser and Stubbs come out looking like Huck Finns for the 21st century.