Caffeine-loving entrepreneurs are finding new ways to give people their daily jolt.

Getting your morning--or afternoon--jolt no longer means standing 10 deep in a line of fellow coffee shop patrons waiting for a barista to prepare your brew. Americans, who consume 400 million cups of coffee per day, according to Coffee-Statistics.com, now have a variety of ways to get their fix. Sure, coffee remains much beloved, but who can resist at least trying caffeinated hot sauce or slathering on revved-up love handle cream?

So far, SumSeeds has garnered a motley fanbase--truck drivers, gamers, programmers and construction workers--who can't resist the relatively healthy snack, which contains 2 grams of sugar per serving compared to Redbull's 28 grams, while delivering a potent dose of caffeine. "Ten years ago, we didn't have an energy drink category and look at it now," says Tim Walter, president of Dakota Valley Products and SumSeeds' creator. "We think energy foods are here to stay." He projects the company's sales to hit $2 million in 2008.

But that's not the only way to satisfy your hunger and need for caffeine at the same time. Golden Flake Snack Food's NRG Phoenix Fury potato chips are buzz-inducing and will be available in Southwestern supermarkets by next fall. Almost makes caffeinated sunflower seeds sound a little less odd.

Some of the most curious caffeine products make the most sense. Case in point: Eco Lips' organic caffeinated lip balm. The $1.2 million company based in Cedar Rapids, Iowa, spent a year determining the ideal amount of caffeine to put into their product. One key consideration: They wanted enough to perk up users, but not so much that people who habitually licked their lips would end up twitching after repeated applications. (Founder Steve Shriver notes that caffeine is rapidly absorbed under the tongue.) The final result was Energy, a green tea and plant wax-based balm made with food-quality ingredients. The black tube contains 4 milligrams of caffeine per stick.

At 6:00 in the morning, though, what goes better with a cup of coffee than a caffeinated donut? Molecular scientist Dr. Robert Bohannon, founder of Encaff Products, amped up donuts with 100 milligrams of tasteless caffeine and may make future versions even more potent. 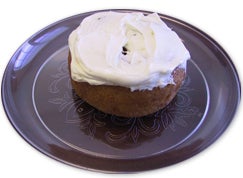 At first, Bohannon asked a local Durham, North Carolina area bakery to make a dozen donuts for him using specially ordered powdered caffeine. After he finally got the "tin can" taste of those pastries-gone-wrong out of his mouth, he began making his own donuts using a micro-encapsulation process frequently used to create nano particles in the pharmaceutical industry. Bohannon covered small particles of caffeine with a lipid coating to eliminate its naturally bitter taste and now incorporates the substance into Buzz brand breakfast bars and the Buzzed bagel without compromising taste. His new Buzz Ultra breakfast bar contains the caffeine equivalent of four and a half cups of coffee. Bohannon is currently in talks with three large international food companies to carry his products.

Americans remain entranced with coffee. In fact, the U.S. is the world's leading coffee consumer. Perhaps it's the whipped cream and steaming shots of espresso. But the caffeine industry continues to expand, and energy drinks are only the tip of the iceberg, as new trends, particularly caffeinated foods, gain momentum. The new swing in caffeine is creating organic, low-sugar and low-fat alternatives to current offerings. So keep a lookout for the creative--and healthier-- caffeinated products headed your way.

Getting Their Fix
Obviously these entrepreneurs are passionate about caffeine. But just how much does it fuel their productivity? Here's a look at their daily habits.

Tim Walter, 49, founder and president of Dakota Valley Products LLC
Daily ritual: 20 cups of Starbucks and Caribou coffee throughout the day--hot in the morning, iced in the afternoon; SumSeeds during his two-hour commute
Total cups of caffeine consumed: 20 cups of coffee
Favorite product: coffee, obviously