Plastic Logic goes against the tiny-device grain with its highly anticipated e-Reader. 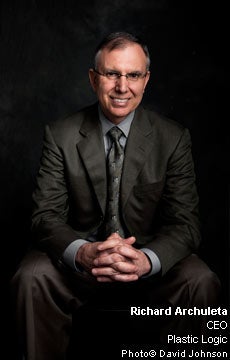 Their wireless device is slated for release in early 2010 and features an innovative touchscreen (as opposed to the Kindle's keyboard), a durable plastic window (as opposed to glass), and high-contrast reflective display technology (as opposed to LED). The company hopes to use the legal-pad-size Reader to lure business clients who can use it to view PDFs and Microsoft Office documents.

Run by CEO Richard Archuleta, Mountain View, California-based Plastic Logic has also inked content partnerships with newspaper and magazine services like USA Today, Financial Times and Zinio. In the future, the company hopes to add a color screen and video capabilities to the Reader, but for now, they're content to just lighten everyone's briefcase.

Aliph: Think Bluetooth headsets are the pocket protectors of the digital age? Check out Aliph's Jawbone, which is both high tech and high fashion.

The Blimp Pilots: The designers of 2008's top selling iPhone application, Koi Pond, released their Distant Shore app in February. Users can find digital messages in a bottle by walking along a virtual shore or write their own.

DotMobi: This Irish company's Instant Mobilizer service takes websites and translates them into handheld-friendly pages with a mobile web address.

Motricity: This mobile information services provider exceeded $100 million in revenue for 2008 and continues to provide mobile storefront, portal and managed web services with partners including Verizon, AT&T and T-Mobile.

PlumReward: Its mobile couponing system makes it easy for restaurants to track customer visits and the effectiveness of promotions.

Slacker Radio: Its highly customizable Internet radio software adapts to your listening tastes as you go. The company started off selling its own proprietary mobile devices-the Slacker G2-but smartly developed iPhone and BlackBerry apps this spring.

Transpera: Billing itself as the world's first comprehensive platform to monetize mobile video, Transpera raised $8.25 million in venture capital this year and has deals in place with VH1, Discovery, MSNBC and MTV.